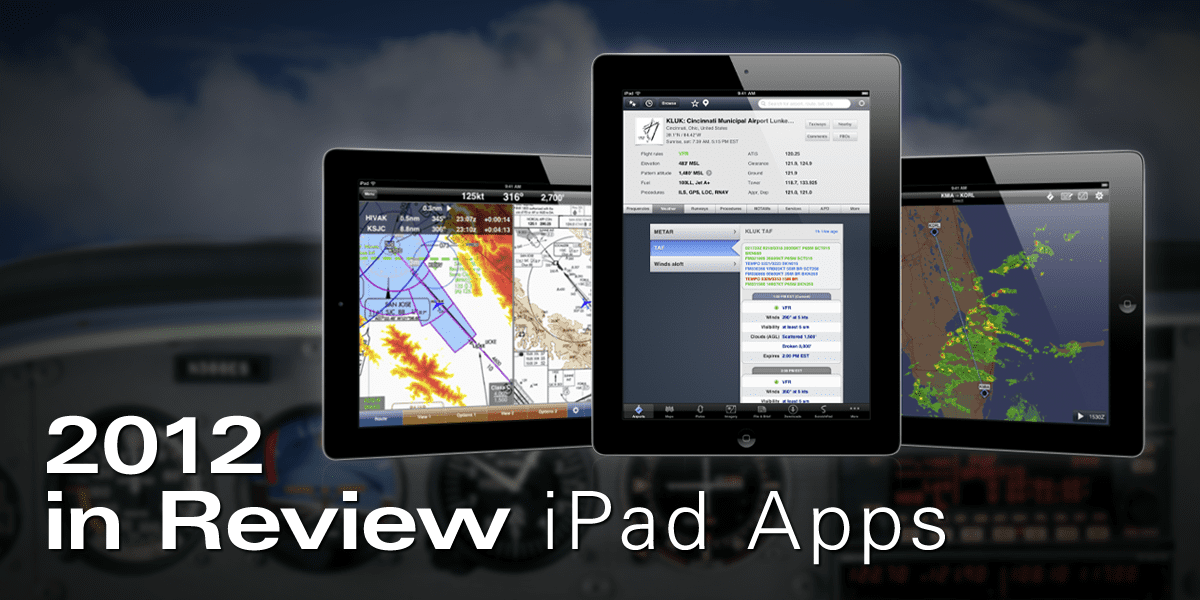 This is the first in a series of articles where we’ll review the year that was in the iPad aviation world, then make some predictions about what to expect in 2013. Today’s topic is apps: the new ones that appeared in 2012, the updates to the existing ones and the state of the market.

It seems like every year is “the year of the iPad,” and 2012 could certainly stake a claim to that again. Apple’s tablet definitively entered the mainstream among pilots, whether as approved Electronic Flight Bags (EFBs) for airline pilots or all-in-one portable navigators for private pilots. But look below the surface and you’ll see a tablet and an operating system that is pretty mature. Apple added a retina screen and some other tweaks, but the basic platform in 2012 is fairly similar to what it was in 2011.

The big action this year was in the app world. Once a collection of homemade apps and novelties, the world of aviation apps has become a fully developed market, one that is served by experienced companies with broad product offerings. The established players added some amazing features this year, while new entrants tried to shake things up. One thing is for sure, though: there is more creativity and energy in the app segment than almost anywhere else in aviation right now.

The strong get stronger

The app market is dominated by three big players: ForeFlight, WingX and Garmin. That trend certainly didn’t change in 2012; if anything, it accelerated. Some smaller app developers shut down or sold out, and overall it seems like the experimentation stage is over with apps. Competing with these three companies is serious work, and there isn’t room for amateurs or mediocre offerings.

ForeFlight consolidated its position as the market leader with a steady stream of new features and upgrades. The app even made Apple’s 2012 year in review as the #24 top grossing app in the entire App Store. This is an impressive feat, as ForeFlight beat out well-known apps like Apple’s Keynote and Numbers (even Angry Birds HD), and was the only aviation app on this list. The upgrades this year included support for the Stratus ADS-B Receiver, a totally overhauled flight plan manager, a new Advisors tool for pre-flight planning, a nifty runway incursion prevention tool, support for flight simulators and more.

But beyond the gee whiz features, ForeFlight also made major inroads with the professional pilot crowd. From their Manage program (which allows a flight department manager to administer a company-wide iPad program) to their powerful new Documents features (which gives pilots the ability to carry SOPs, company manuals and compliance documents), this app is showing up in the cockpits of Fortune 500 companies and even some airlines. For once, technology is trickling up in aviation, not down from the airlines and military.

Garmin Pilot certainly didn’t stand still though, and in fact this app saw the most significant changes in 2012. At Sun ‘n Fun, the GPS giant completely relaunched their app (formerly known as Pilot My-Cast) with a new name, a new look and new features. Garmin was in effect announcing that they are serious about the iPad market, and updates since then have proven it. The new Garmin Pilot features a Home menu just like the popular GTN series of panel navigators, plus split screen, a powerful flight planning tool and Garmin’s famous panel page of simulated instruments.

Garmin also added support for an ADS-B receiver of their own–the GDL 39–which works on Garmin portable GPSs in addition to the iPad. Garmin also rolled out Pilot for Android phones and tablets, unique among the big three apps. The Android version seems to lag the iOS app in features, but it’s still one of the only comprehensive aviation apps for Google’s platform.

WingX, the last member of the big three, is known for an emphasis on in-flight features and for pushing the envelope on new functionality. The company continued in this direction in 2012 with a number of upgrades. This included a Passive RADAR Altimeter feature, a new track up option on the moving map and enhanced terrain/obstacle alerting. Overall, this app seems to have Garmin portable GPSs squarely in its sights.

WingX also announced support for a number of external accessories this year, including GPS and weather receivers. ADS-B traffic, though fairly limited, was first added this Spring when the app is paired with the SkyRadar receiver. Just before the end of the year, Dual began shipping their new XGPS170 ADS-B receiver, which is also supported by WingX. This combination was a little rough in our flight trial, but Dual is a major player in iPad accessories and they are a company to watch. (We’ll have more on iPad accessories in our next article.)

While not among the main three apps, FltPlan.com’s iPad and Android apps made significant progress in 2012, improving from a pretty basic product to a full-featured in-flight resource. It’s still not quite ForeFlight or WingX, but this is an app to watch, not least because it’s free. FltPlan.com claims to handle a huge number of IFR flight plans, and it seems to have earned a place among corporate flight departments in particular.

It wasn’t all about the established players this year. Two notable apps came on stage late in the year, from two well-known names: Bendix/King and AOPA. The two apps were both developed by Seattle Avionics, so they share some features, but each has a unique interface.

Bendix/King’s myWingman app is part of the company’s re-launch of its general aviation brand. It includes synthetic vision, charts, weather maps, instrument approach procedures, airport diagrams and more. It will interface with Levil’s portable AHRS for the synethic vision view, which includes a “myWingMan view” that shows your airplane from a chase plane view. Annual subscriptions to the app start at $99/year.

AOPA’s FlyQ EFB is an extension of their free app for iPhone, but adds a number of features to be more of an in-flight tool (and is not free). Like myWingMan, the focus here is on the map page, with split screen, track up, synthetic vision and a lot more. It also integrates with Levil’s AHRS, but no ADS-B receivers are available yet. They are most likely on the map for 2013. The app starts at $69.99 for AOPA members (or $99.99 for non-members).

Both apps are for iPad 2 or newer (no iPad 1 or iPhone). Read our full review of each app here.

Not just the all-in-one apps

When pilots talk about aviation apps, most of the discussion revolves around the all-in-one apps we’ve reviewed here. Indeed, a great way to start a fight among pilots is to claim one app is better than the other (trust us). But there are a number of exciting aviation apps out there that don’t involve moving maps or charts. Here’s a list of just a few notable stories this year:

Read all our articles about apps.

What do you think was the biggest app story of 2012? Share your comments below.