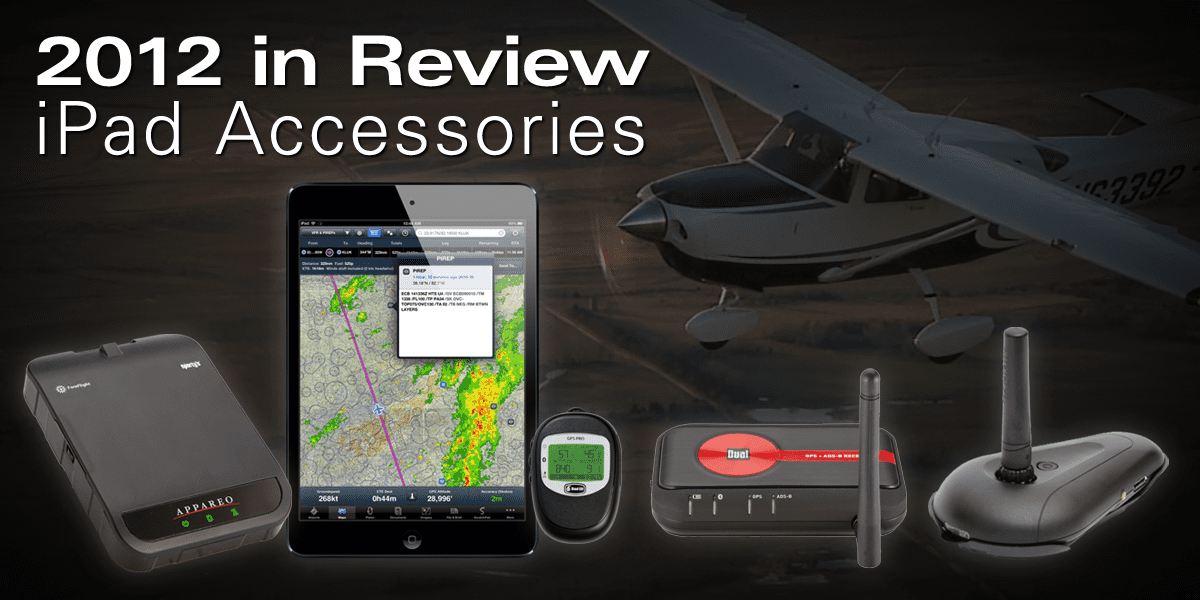 This article is part 2 of 3 in our series that looks back at the world of iPad in 2012. Here, we’ll review the year in iPad accessories.

It may have been a busy year for apps in aviation, but software had nothing on hardware in 2012, as a slew of new products hit the market. Much like apps, the options have exploded in recent years, going from homemade solutions to custom-made aviation products. There’s now a thriving ecosystem built around the iPad, with large companies like Garmin and small start-ups all competing to bring out the next ground-breaking accessory.

The Stratus ADS-B receiver became one of the hottest products of the year.

This was undoubtedly the story of the year. While SkyRadar’s ADS-B receiver may have been the first portable receiver for iPad, it hadn’t gained much traction as 2012 dawned. Many pilots didn’t even know what ADS-B meant at the start of the year. That began to change at Sun ‘n Fun in April, when a trio of companies (ForeFlight, Appareo and Sporty’s) introduced Stratus, the first totally wireless ADS-B receiver and the only one to work with aviation’s most popular app. Stratus became one of the most popular products of the past few years, and even won a Flying magazine Editors’ Choice Award. Pilots began to ditch their XM Weather subscriptions soon after.

With ADS-B firmly on the mind of iPad pilots everywhere, Garmin came to Oshkosh a few months later with some major announcements of their own. In addition to new panel-installed ADS-B receivers and an informative ADS-B Academy website, the GPS giant unveiled the GDL 39. This portable receiver includes GPS and ADS-B weather, but also receives ADS-B traffic. The subject of traffic confused a lot of pilots (see this article for details), but it does show what the future of ADS-B will look like, especially after 2020. Another unique feature of the GDL 39 is that it works with Garmin portable GPSs in addition to tablets.

There was lots of other ADS-B news at Oshkosh, including product announcements from Dual, Sagetech and others. Many of these products looked like nothing more than concepts, but it was clear that the ADS-B party was on. Delivery dates soon slipped for most of these units, often by many months, but Dual’s new XGPS170 did ship in mid-December. The company has sold thousands of Bluetooth GPSs for the iPad, and their new ADS-B receiver looks like the top option for WingX at this point (although our flight test wasn’t without problems).

One thing’s for sure: the ADS-B wars have just begun.

Garmin introduced a slew of new products for the iPad, including the GLO GPS receiver.

Garmin goes all-in on the iPad

In addition to the impressive GDL 39, Garmin showed off another iPad accessory at Oshkosh: the GLO Bluetooth GPS. This wireless GPS receives both traditional GPS signals and also Russian GLONASS signals for a faster lock-on time. Between Garmin’s GLO, GDL 39 and Pilot app, the GPS giant has proven that they are serious about the portable market. The iPad has certainly disrupted the portable GPS market, but Garmin is fighting back.

The big story at the end of the year was the iPad Mini. This long-rumored tablet was the topic of conversation for months, and finally made its appearance in October. We took it flying and found it to be outstanding in the cockpit–not too big, not too small but with a great screen. Initial reaction was positive, with many pilots using a full size iPad for pre-flight planning and an iPad Mini in flight.

With the announcement of the Mini, accessory manufacturers scrambled to create new products. The first iPad Mini mounts soon appeared, and most pilots agreed that the 7″ tablet fit nicely on general aviation yokes. The first iPad Mini kneeboards were also announced, with more designs coming in the new year.

One other change Apple introduced with the iPad Mini (and the new iPad 4) is a new charging plug–called the Lightning connector. Overnight, the traditional 30-pin plug was made obsolete, so watch for changes to charging products.

One of the first things iPad pilots learn as they begin flying with the tablet is the need for power. With a built-in 8 hour battery, you can do a lot of flying without having to charge the iPad, but it makes sense to have a backup. In particular, the iPad requires a higher power, 2.1 amp charging port for best performance. In response to this unique need, a number of companies have introduced iPad charging accessories, and dozens more hit the market in 2012. These include cigarette lighter plugs, backup battery packs and even solar chargers.

Flight bags made for iPad

The iPad is changing the way pilots fly, and it’s also changing what they carry. Gone are the big binders of charts and the pages of documents. Many flight bag designers have reacted by introducing “iPad-friendly” bags built for tablets. Sporty’s popular Flight Gear collection was updated to be iPad-compatible, and MyGoFlight launched their latest line of high tech flight bags.

There were plenty of other accessories in 2012 that were either made for the iPad or designed to work in concert with it. Here’s a sample of stories we covered in 2012:

Read all our articles about iPad accessories.

What do you think was the biggest accessories story of 2012? Share your comments below.

The year in review: apps

The year ahead: 2013 predictions for the iPad
Scroll to top