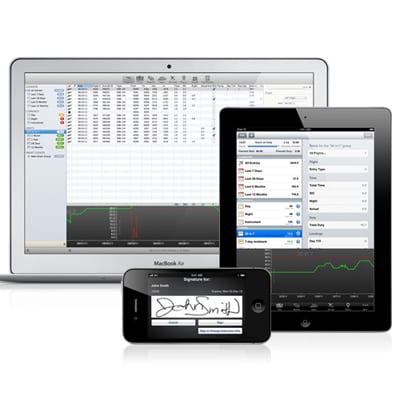 Since Microsoft Excel first appeared in the mid-1980s, pilots have been keeping track of their logbooks on computers. Over time, this grew from basic spreadsheets to dedicated logbook applications. These programs made it much easier to keep track of currency requirements like takeoffs and landings and instrument approaches. If you’ve ever filled out an aircraft insurance form, you know how valuable an electronic logbook can be.

But until recently, the options were fairly limited for iPad logbook apps. One of the first truly stand-alone logbook apps for iPad was LogTen Pro, and the app has continued to improve over the years. The latest version, LogTen Pro Universal, is the best yet, and works on iPad, iPhone and iPod Touch. All logbook features are right in the app, so there’s no need to ever sync with your laptop or desktop computer.

One of the nicest features of LogTen Pro is the fast setup. There are a number of pre-loaded configurations for general aviation pilot, airline captain, instructor, military and more. This is a real time saver, as the app will show or hide data fields and reports based on the type of flying you do. For example, there’s no point in tracking Part 135 currency if you’re a VFR Private Pilot.

These configurations don’t remove the ability to create custom fields, though. In fact, one of LogTen Pro’s real strengths is its ability to customize most parts of your digital logbook, including custom time fields, custom currency trackers and custom reports.

The Logbook tab is the place to log each leg.

The core features of LogTen Pro are shown as tabs at the bottom of the screen, and make it easy to navigate around the app.

The main benefit of an electronic logbook is in time-saving, and that goes for flight logging as well. After some initial setup, you can log your latest flight in seconds with LogTen Pro. You can keep a list of favorite aircraft and favorite airports, so choosing those is just a tap away. And with some intelligent auto-fill rules, you don’t have to enter the same time over and over again (say, for total time, complex time, retractable time, etc.). There’s even an automatic calculation for night time.

Logging your flights doesn’t have to mean just airport IDs and Hobbs time. LogTen Pro allows you to write detailed notes about each flight (great for students or instructors) and even attach pictures to an entry. With the iPad’s built-in camera (iPad 2 and 3), this is incredibly easy to do, and a fun way to make your logbook equal parts legal document and aviation scrapbook.

Here’s something that was previously impossible with a digital logbook–instructors can literally sign a student’s logbook, right on the iPad. This makes LogTen Pro a practical replacement for all paper logbooks, even for primary instruction and recurrent training.

The Radar tab provides key info at a glance.

LogTen Pro includes over 80 reports that make your data easy to understand, including FAA 8710 forms, currency reports and duty time tracking. Plus, your flight time can be displayed in a variety of charts. This is one of the app’s strongest points–if you have a question about your flying, it can probably be answered with a few taps on your iPad’s screen. No more smudged entries or math mistakes.

But even with a powerful logbook app, there are times when a printed logbook makes sense–especially for job interviews. LogTen Pro allows you to print authentic logbook pages  in multiple formats.