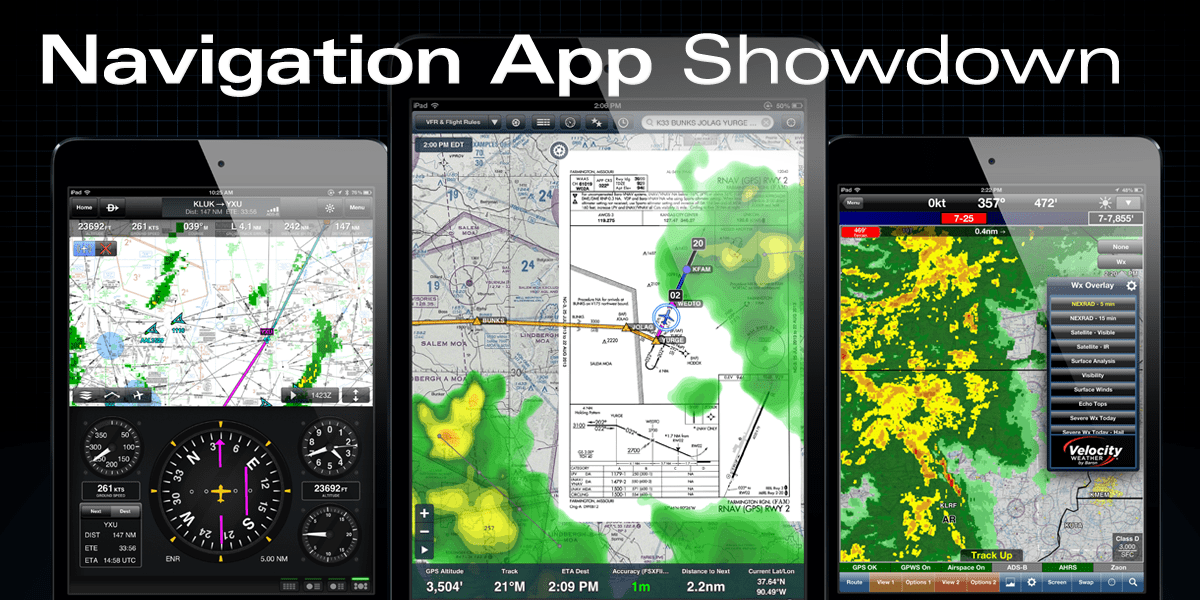 One year ago, we posted an article titled “Navigation App Showdown.” After ducking the issue for a long time, we finally faced up to the number one question we get here at iPad Pilot News: which aviation app is the best? We had been avoiding the question because it’s almost impossible to answer–what works for one pilot may not work for another. But we gave it our best shot, and compared the top three apps (ForeFlight Mobile, Garmin Pilot and WingX Pro 7) side-by-side. Our main suggestion was to try all three, since personal preference plays such a big role.

This article went on to become our most popular ever, and generated over 290 reader comments (they’re still coming in today). Some agreed with our conclusions, some disagreed, but we received hundreds of comments thanking us for at least addressing the subject.

A year is an eternity in the life of an app, so we thought it would be fair to check in on the apps and see what’s changed. In writing this article, we avoided the app developers and went straight to the pilots who use these apps day in and day out. We talked to hundreds of them about what they liked, didn’t like and what they would like to see added. We also combed through app reviews in the App Store. This feedback (pilots have strong opinions!), combined with our reporting on these apps over the past year, shows just how far these apps have come and where they might be headed in the future.

Read on for more.

A fair question to ask–even before starting the debate–is whether ForeFlight, Garmin and WingX are still the top three apps. There have been a number of new entrants in the past year, from Bendix/King’s myWingman to Fltplan.com to AOPA FlyQ. Have any of them displaced the traditional favorites?

Our most recent reader poll showed that ForeFlight retains a dominant position as the top app, with WingX second and Garmin third. There was a rise in the “other” category, but this included a wide variety of apps with no clear winner. Recent surveys at EAA Airventure seminars generally back up these statistics.

For a final check, we looked at the iTunes App Store’s Top Grossing ranks. This is the one place where all apps are shown together (not separated by category), and it measures how much revenue is generated from purchases within the app. It’s possible to buy these apps outside the App Store as well, so this doesn’t show a complete picture. But the majority of sales still come this way, making it a good indicator of trend at least.

Here are the average rankings for the last 30 days for ForeFlight, Garmin and WingX (no other apps regularly appeared in the top 300):

As the chart shows, ForeFlight seems to be in the top spot, with Garmin and WingX battling for second. All of these statistics seem to indicate that these are still the big three apps. With that in mind, let’s look at the features.

While sometimes forgotten in the hype about the latest moving map feature, all of these apps really excel at pre-flight planning. From choosing an airport to selecting a route and checking the weather, the iPad makes it easy to plan your next flight. It’s simply incredible how much information is available in these apps. Here’s a review of the recent changes.

Using an iPad in-flight once seemed like a pie-in-the-sky dream. But it’s a reality now, and app developers have been racing to make their products less of a static reference and more of an interactive co-pilot. This has driven some fairly significant changes recently, especially from ForeFlight and Garmin.

Ease of use, stability and support

If you plan to use an iPad as the primary source of charts, especially for IFR flight, these are critical factors. After all, great features don’t matter if the app is unusable due to bugs or if you don’t know how to operate it.

ForeFlight has a sterling reputation here. Pilots rave about how easy to use the app is, with thoughtfully-designed menus and automatic chart downloads that make updates simple. These downloads can be done with the screen off, a nice enhancement that was added this year. The app also boasts rock solid stability–in our experience, we’ve never seen the app crash. If there is a problem, ForeFlight prides itself on outstanding customer support, available 15 hours per day, 7 days per week. There are also a variety of training resources, from ForeFlight’s helpful blog to complete video training courses.

Garmin is no small start-up, and has a large team behind their app with a good reputation for support as well. They have also invested some serious effort into making their download process easier and more robust, and it copes well with intermittent WiFi connections. The app is also thoughtful about how it uses storage space. Garmin shows your iPad’s overall capacity at the bottom of the downloads page, which is handy for planning coverage areas, and it also offers three different terrain resolutions depending on how much space is free on your iPad. The only knock on Garmin is that lately we’ve heard some complaints about app crashes in the most recent version.

WingX has always taken a more aggressive approach to adding new features, which users clearly love. However, this rapid pace of innovation does seem to occasionally come at the expense of ease of use and stability. We heard some complaints about a steep learning curve for new users, although Hilton Software has released a series of training videos to help. Some pilots also mentioned seeing occasional app crashes, and we’ve experienced this too. When it comes to downloads, WingX does a number of things to make its file sizes smaller (and its downloads faster). Having evolved from an early Windows CE app, the company had to learn to deal with limited speed early on, and it shows here.

It’s worth pointing out that all three of these apps are pretty reliable, so these reports of app crashes wouldn’t affect our confidence in any of the apps. The decision should be based more on which one you think is easy to use and which one you have confidence in.

These apps usually don’t operate alone in the cockpit; a variety of accessories are used to get more out of them, from moving map navigation to terrain alerts to in-flight weather. GPS receivers are universal. Because it’s built into iOS in the form of location services, all the popular GPS units like the Bad Elf, Dual XGPS 150 and 160 and the Garmin GLO work with all three apps automatically. This is simple and easy, and these wireless GPSs are among the most popular iPad accessories (even pilots with 3G/4G iPads will often use one for reliability).

ADS-B receivers like the Stratus have become very popular accessories.

One recent change worth pointing out is that ForeFlight connects directly to Bad Elf and Dual GPSs. This has been added as a workaround to the iOS 6 location services bug–an Apple bug that has caused some serious headaches. If you’re using one of these GPSs, you’ll immediately appreciate this feature.

ADS-B receivers are a different story. Since there’s no built-in Apple standard for receiving datalink weather, each device must be integrated individually with each app–it’s not automatic. As a result, the app developers take different approaches. Garmin and ForeFlight integrate with a single ADS-B receiver that they helped to design (GDL 39 for Garmin and Stratus for ForeFlight). These companies argue that, by building the hardware and software as an integrated system, the end result is more features, more stability and more options for upgrades in the future. Some pilots disagree, and would like to see more options for ADS-B receivers on these apps.

WingX takes a different approach. By using a common standard, the app supports a number of ADS-B receivers, including the Dual XGPS 170 and the Sagetech Clarity. WingX emphasizes the flexibility of choosing among different receivers. The only downside to this approach is that the integration isn’t always seamless, as our initial flight test of the Dual XGPS 170 showed (many of these bugs have now been fixed).

In the end, we wouldn’t choose an app based on the accessories it works with. You have to live with the app every day whether you’re using an ADS-B receiver or not. Pick the app first, then the hardware.

All of these apps are a great value, saving you hundreds of dollars per year over paper charts. We don’t consider this to be a reason to buy or not buy. With that said, here are the current prices:

So which one to go with? We’ll dodge that answer just like we did last year–there’s no single right answer. The right app is the one that you like, the one that makes sense to you and the one you can use safely in the cockpit. The best advice is still to download all three and try them for yourself. ForeFlight and Garmin are free to download and use for 30 days; WingX is only 99 cents. It’s worth an afternoon on the couch and a trip around the pattern with each to see which one is best for you.

Overall, we would encourage you not to buy an app based on a feature list or a flashy ad. We believe these apps are becoming fairly similar in terms of features–they all offer great pre-flight and in-flight tools. There are still differences, for sure, but we see these becoming smaller and smaller as time goes on. It’s a sign that the app market is starting to mature. Future pilots will most likely decide based on “softer” issues like reliability, ease of chart updates and support. These issues are harder to judge than just features, but they matter much more over the long haul.

Let’s hear from you: what’s your favorite app? Why? Add a comment below.

The flight school of the future – using an iPhone for training