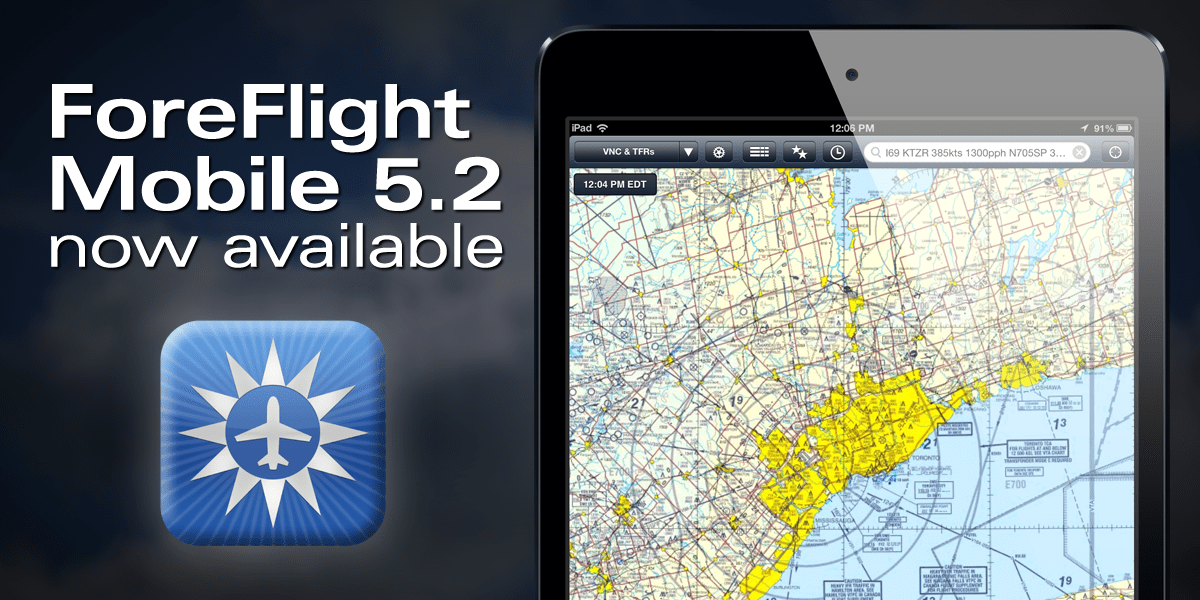 ForeFlight Mobile has become the dominant app in general aviation, with Cessna and Gulfstream pilots alike using it for pre-flight planning, digital charts and in-flight weather. But for some pilots–especially Canadian and helicopter pilots–the app has always lacked critical features that kept it from being the go-to resource. That changed today with the release of version 5.2, which adds some major new charting capabilities and should open up the app to more widespread adoption. ForeFlight CEO Tyson Weihs calls this update, the fifth significant one of 2013 so far, a “monster release for us.”

There are also some upgrades for current users, so let’s review what’s new.

ForeFlight automatically switches between both types of Canadian VFR charts (VNC on right and VTA on left) as you zoom.

ForeFlight has offered Canadian IFR charts for a while now, but this update adds the full suite of VFR navigation charts, making it a comprehensive charting solution for all Canadian pilots. Visual Navigation Charts (VNCs) are similar to US Sectional charts, and the more detailed Visual Terminal Area Charts (VTAs) are similar to US TAC charts. As it does in the US, ForeFlight automatically switches between the two charts as you zoom in and out, showing more detail the tighter you zoom.

Like all charts, these new Canadian VFR charts can be downloaded for in-cockpit use, and are geo-referenced for full moving map capabilities. These Canadian charts also include a new option to display chart legends and change how adjoining charts are stitched together (more about this below).

While Canadian pilots obviously benefit from this addition, many US pilots will find a lot to like here as well. Whether it’s the summer fishing trip to Canada or a shortcut across Canadian airspace, ForeFlight has filled a gap here. This feature does require a separate Canadian chart subscription, which is $149.99/year.

Both Helicopter Route Charts and Gulf of Mexico Helicopter Charts are now available in ForeFlight.

Helicopter operators have been using the iPad for some time, but not quite as enthusiastically as airplane pilots. A big reason for this lack of enthusiasm was the lack of complete helicopter charts. While Sectionals and TACs are fine for cross-country helicopter flying, special Helicopter Route Charts are essential for operations in larger cities like Chicago and New York. These detailed charts show predetermined helicopter routes and frequencies, plus visual checkpoints.

For the busy Gulf of Mexico area, which depends on helicopters to support offshore oil rigs, there is a special Gulf Coast VFR Aeronautical Chart. This depicts offshore mineral leasing areas and blocks, plus drilling platforms and Gulf weather stations. This is an essential chart for the fleets of helicopters that depart every morning from Texas and Louisiana.

Version 5.2 now includes both types of helicopter charts, at no additional cost. They are downloadable and geo-referenced, and can be viewed at the same time as Sectional charts. Helicopter charts can be selected for download from the Downloads tab, United States. Once downloaded, they will show up as another basemap option on the Maps tab.

The FBO page (accessed from the Airports tab) has always been a useful tool for pre-flight planning and fuel prices, but to us it seemed limited and space-constrained. In version 5.2, this feature gets a complete overhaul.

It’s still accessed by tapping on the FBOs button at the top right of the Airports page, but it now brings up a window overlay. It’s laid out more cleanly for easier scanning. This window includes a lot more information, including a description of the business, detailed service listings and photos of the facility. Not all FBOs have these enhanced listings, but ForeFlight will be rolling this out to more locations in the near future.

This seems like an area that’s ripe for even more improvement, so we’ll be interested to see if this new format leads to more features down the road. Selecting FBOs and finding the best fuel price is a key feature for both GA pilots and corporate pilots, so it’s obviously an area of interest.

The new Document search feature makes it easy to sort through long documents.

The Documents feature may sound boring to some GA pilots, but for pro pilots and flight departments, document storage and retrieval is a really big deal. Some operators are storing hundreds of documents on their iPads, from OpsSpecs to SOPs to weight and balance documents. Replacing paper reference material is as important as replacing paper charts for many.

While viewing documents has always been fairly intuitive, organizing and accessing the right document can be a struggle. ForeFlight has responded smartly, in our opinion, with a powerful new search function. Everyone has been trained by Google to use search as a form of navigation, and this fits in well with that mentality. Once you open a document, tap the magnifying glass symbol in the top menu bar. As you start typing, ForeFlight will automatically show results in a drop-down menu. Tap on a result to go to that page. This works even on scanned documents like PDFs–it does not have to be a text file. We found this to be a major help.

There is also an improved bookmark function, which allows you to name a bookmark location (e.g., fuel system diagram). This makes accessing frequently-used pages faster. You can also use Apple’s standard pinch motion to close documents and return to the Documents list view (this works the same way as Apple’s Photos app).

In addition to these major feature additions, there are a few other things to note. First is an option for distance rings, which automatically draw range rings around your airplane on the map. This is similar to the view many multi-function displays offer.

There is also a new “flight bag tiles” feature that allows you to view chart legend data and adjust how overlapping charts are stacked. So if an airport is partially cut off because of a chart seam, you can now stack the charts and view it just as if you were looking at a paper chart individually. This only powers the Canadian VNC charts for now, but it seems likely this will come to other charts soon. This should address some FAA concerns (overblown in our opinion) about chart margins or data being cut off.

There is a new option for the Navlog columns, allowing you to view leg information (time, distance, etc.), total information or both. Both is selected by default. Finally, version 5.2 includes the usual bug fixes and performance enhancements.

As always, the update is free and available in the iTunes App Store. For more information about ForeFlight, click here.

iPad memory management – how to free up storage space