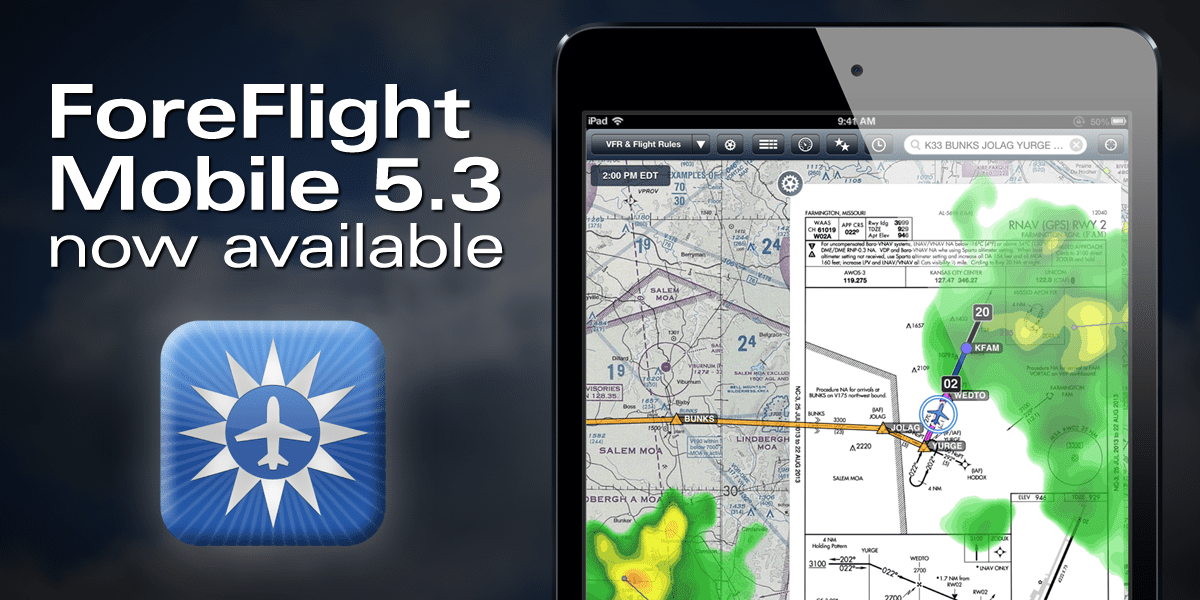 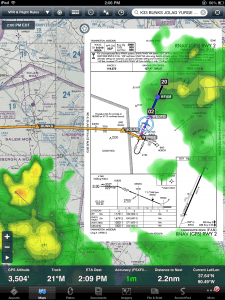 The new chart overlay feature allows you to view approach charts right on the moving map.

The 2013 edition of AirVenture Oshkosh may have wrapped up yesterday, but the new iPad product announcements continue to roll in. ForeFlight today released another update to their popular flight planning and navigation app, making it the sixth significant update of the year. ForeFlight Mobile version 5.3 adds some exciting new features, including the ability to display instrument approach charts and airport taxiway diagrams directly on your moving map. It also includes a firmware update for Stratus 2, enhancing its GPS performance. Let’s look at each new feature and how you can take advantage of them.

Approach Charts and Taxi Diagrams on the Moving Map

ForeFlight Mobile Pro level subscribers now have access to a new feature that allows you to overlay geo-referenced approach charts and taxiway diagrams directly on the moving map. This adds a new level of situational awareness for pilots flying IFR, and is additionally useful for all pilots when a taxiway diagram is needed at larger airports. There are five ways to access this feature in ForeFlight:

This feature works with ForeFlight’s catalog of over 13,000+ geo-referenced charts and 700+ geo-referenced airport diagrams on the moving map. Keep in mind it is not designed to work with procedures like SIDs and STARs since these are not drawn to scale. When viewing a chart on the map, tapping it will load a pop-up window with options to turn the view off, display it full screen or to load a different plate. The opacity of the plate overlay can be adjusted with a slider in the gear icon at the top of the Maps view.

Chart with weather and track-up

There are some great benefits to overlaying the chart on the map, including:

The bottom row of flight information shown on the Maps and Plates tabs has been improved. It now uses a transparent design to allow a partial view of the map behind it, and in landscape orientation you’ll see an expanded set of 8 instruments now displayed. A new Instrument button was added to the top menu bar to show or hide the instruments.

Pilots who use ForeFlight’s integrated IFR flight plan filing tool will receive a helpful new alert in the latest update. The app is now able to receive updated expected routing information when it becomes available from the FAA’s flight plan system. You will receive a notification directly on all the devices that have ForeFlight installed, and you can send this new route information directly to the moving map. The flight plan form will also be updated, adding the expected route and a link to FlightAware for flight tracking. This feature requires a Pro subscription. 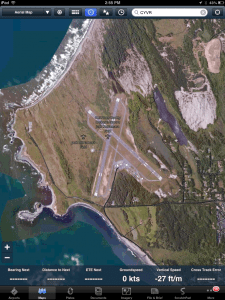 When connected to the internet you can now enable a new Aerial Map option. This displays detailed satellite imagery on the map, and can be useful when flight planning to get a better feel for the airport layout, and where FBOs and other airport features are located. Due to the large size of the map, the app cannot save the entire aerial map for use in the air. It will however cache the areas that you previously viewed, which will remain accessible later in flight

Last month’s ForeFlight update added a direct connect feature to the Bad Elf GPS receiver, which allows the app to bypass the GPS bug inherent in the iPad’s operating system. This new 5.3 update enables the same direct connection with the popular Dual XGPS150. To enable this feature you must first update the firmware on the XGPS150 from Dual’s website.

Finally, the latest ForeFlight update includes new Firmware (version 1.3) for Stratus 2 owners. This fixes GPS performance issues that some experienced when flying above 35,000 ft. Here’s a quick video explaining how to update the Stratus 2 firmware: How to update Stratus firmware.