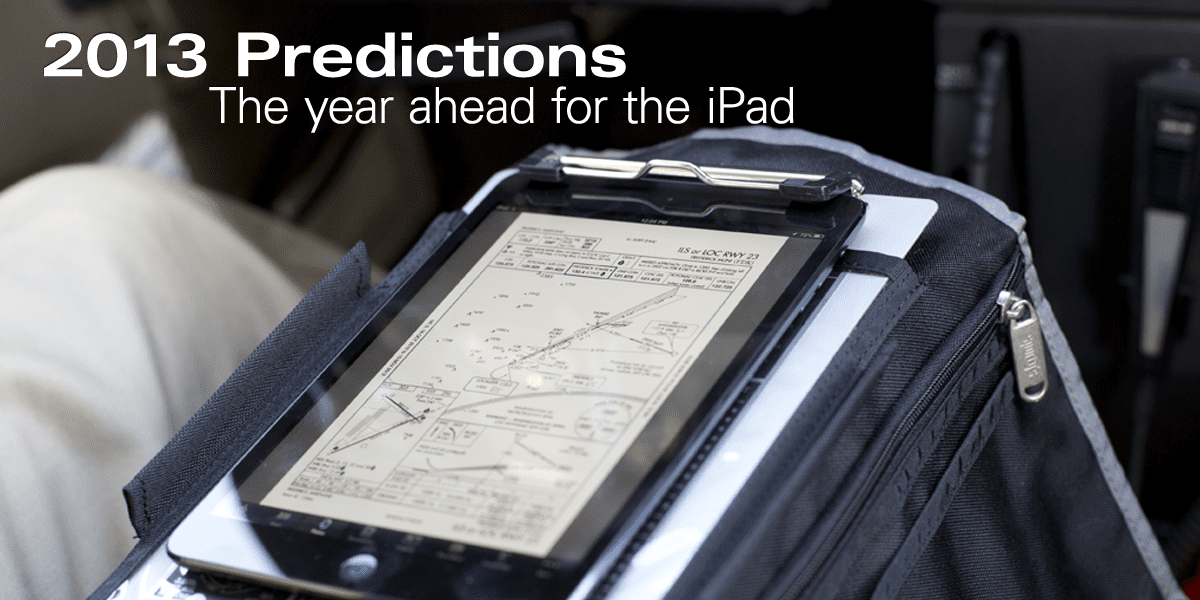 This is the final article in a series where we review the year that was and look forward to the year ahead. Previous articles have discussed apps and accessories for iPad pilots. Here, we’ll look ahead to what might be coming in 2013.

This has certainly been an exciting year for the iPad in aviation, from new apps to whole new categories of accessories. What’s to come in the year ahead? It’s nearly impossible to say, but we’ll try anyway.

Apple’s new 7″ tablet has been a hit so far, but we think it will dominate aviation in 2013, becoming the new standard in electronic flight bags for pilots. There are some good reasons for this, most importantly its size and shape. The Mini mounts well on a traditional yoke (much better than the 10″ iPad), without interfering with the controls or blocking too many instruments. But it’s also easy to hold with one hand or put on a kneeboard, so it’s much more adaptable to different types of airplanes. We might even see the iPad Mini in the panel of some experimental airplanes. In spite of this compact size, there are very few compromises on the screen, as approach charts are easy to read and standard iPad apps run just fine on the Mini.

Besides a convenient form factor, the Mini is also less expensive. No, it’s not the cheapest 7″ tablet out there, but it’s the best value among iPads and it will only get better when the iPad 2 eventually disappears. If nothing else, you’ll probably start seeing iPad Minis showing up as backups to full size iPads. Read our report on flying with the iPad mini to see why we think it’s so impressive.

App developers are already reacting to the Mini, by updating their software to look just right on it. Expect more of these updates in 2013, some of them significant. Just like some websites are now designed with a “mobile first” mindset (meaning it’s designed to work perfectly on a smartphone, not just as an afterthought), we predict some aviation apps will target the Mini as their preferred platform. This doesn’t mean radical changes to the app’s features necessarily, but user interface and readability tweaks to fully embrace the new size.

Accessory manufacturers are also reacting. RAM already has a pretty well-developed line of mounts for the the Mini, but they’ll almost certainly have more on the way in 2013. iPad Mini kneeboards are pretty scarce right now, but there are dozens of designs in the works from a number of companies. As we mentioned above, the Mini is particularly well-suited to a kneeboard, so we would expect this to be a hot segment of the market.

One last iPad Mini trend–don’t be shocked if it gets the same high resolution Retina screen in 2013 that is on the iPad 3.

Dual’s XGPS 170 is the latest ADS-B receiver to hit the market.

The launch of Appareo’s hugely-successful Stratus and Garmin’s robust GDL 39 last year showed that ADS-B receivers are the hot iPad accessory right now. Expect to see the market get crowded next year, as more companies introduce increasingly-sophisticated products. Dual just recently launched their XGPS170, and companies from SageTech to Levil have ADS-B receivers on the drawing board. New apps like AOPA’s FlyQ and Bendix/King’s myWingMan do not support any ADS-B receivers right now, but it would be surprising if they didn’t soon add this–subscription-free weather is the new must-have feature.

One thing to watch is how these various receivers integrate with different aviation apps. Unlike GPS, which is easy to implement across a variety of apps because it’s built-in to Apple’s iOS platform, ADS-B integration is hard work. It takes time and effort to make the hardware and software work seamlessly. Stratus was developed from the beginning to work with ForeFlight, and Garmin likewise could control the entire GDL 39-Garmin Pilot experience. This led to “closed” products, but pretty predictable performance. Our initial testing of the Dual XGPS170, an “open” platform product designed to run on multiple apps, revealed some issues. Can those be fixed? Is open the wave of the future or does it compromise the user experience? We may find out in 2013.

As we mentioned in our review of the app world in 2012, it’s becoming increasingly obvious that the start-up era in aviation app development is coming to an end. The majority of pilots have made their choice of app, and the market has become split between Coke and Pepsi–once you pick one, you tend not to change. Beyond this, it’s simply a reality that the market can only support so many apps. That suggests the big three (ForeFlight, Garmin, WingX) will probably get bigger, and smaller players will fade away.

That’s not necessarily bad for consumers, though. These big three are competing fiercely with each other–new features are coming fast and furiously, yet prices are staying the same or going down. Three may be the right number of players for now, but keep an eye on FltPlan.com, as they may yet mount a challenge with their free app.

Of course, not all of the action on apps revolves around these deluxe in-flight navigation apps. 2013 will almost certainly see dozens of exciting new apps hit the market with less audacious goals, whether it’s the next great logbook or advances in pilot training apps. This is where the entrepreneurial app developer can still make an impact, and it’s where we expect to see growth in app downloads. Having chosen their cornerstone app, pilots are now starting to venture beyond the big names and try different things.

Professional pilots will be the biggest users of the iPad in 2013.

This was an emerging trend in 2012, as airlines and major corporate jet operators began to abandon paper and adopt the iPad (saving weight and fuel). Expect this to really take off in the year ahead, as the FAA and other regulatory bodies get the paperwork caught up with the technology. With American Airlines having blazed a trail, United, British Airways, Delta, Alaska and many others are integrating the iPad into regular operations.

This is just the latest example of a revolution in thinking among these big companies–whereas once they would have custom-built expensive display devices, they are now thrilled to use off-the-shelf technology that lowers costs. That means they can spend less money on hardware and more on software, so company-specific apps will probably become popular. Some airlines have already announced plans in this area–are airlines the next big hirer of app developers?

With the launch of the iPad Mini, iPad 4 and iPhone 5, Apple made a major change by replacing the ubiquitous 30-pin charging plug with the new Lightning connector. The new connector is much smaller and should offer improvements in the long term, but in the short term it’s a major transition and a bit of a hassle for owners of older devices (this adapter can help).

That means almost every accessory that has to be plugged into your iPad will have to be updated, whether it’s a charging cable for the cockpit or an alarm clock for your nightstand. Many accessory companies have taken this opportunity to overhaul their product lines, so 2013 should bring a host of new gadgets. Just make sure you buy the right connector for your iPad.

We’ll finish by going out on a limb for a few predictions that just might happen in 2013:

What do you think? Do you expect to see major changes in the iPad world next year? Anything you’re hoping to see? Add a comment below.