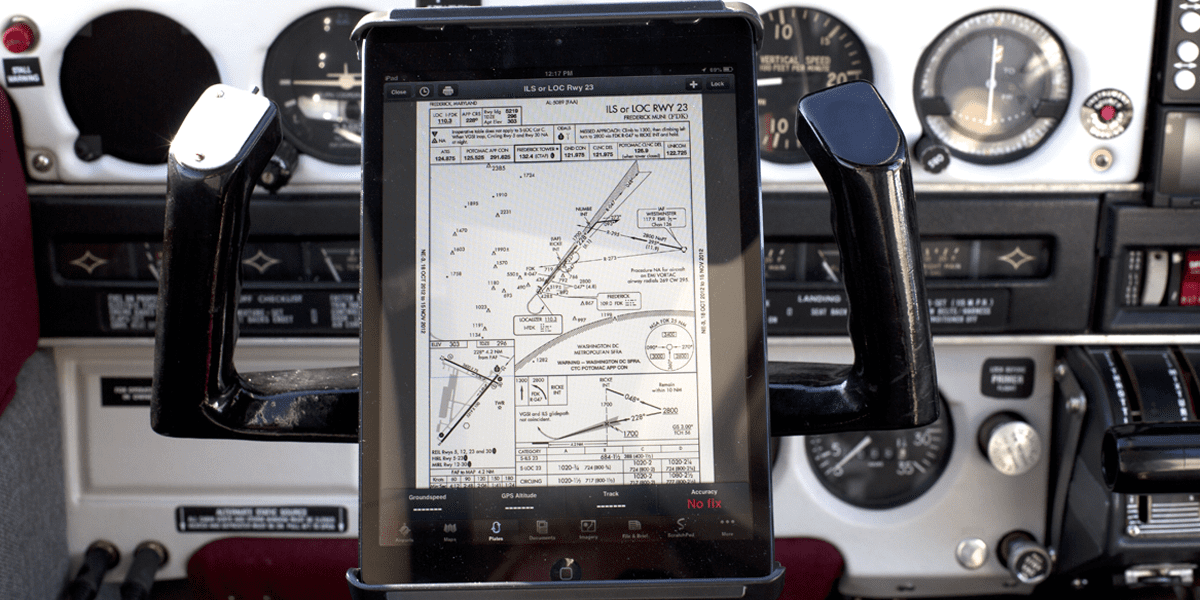 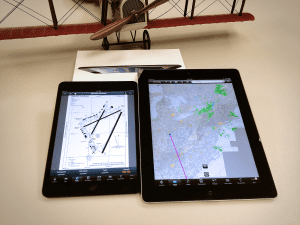 Our iPad Mini arrived right on schedule from Apple this morning, and we didn’t waste any time getting out to the airplane to begin testing it out. We were immediately impressed with the overall build-quality of the iPad Mini, and it feels as solid and well-constructed as the larger iPad models. The smaller size means less to weight to lug around in your flight bag and allows for more mounting options than were previously available with the regular iPad. We loaded several of the popular aviation apps, including ForeFlight Mobile, Garmin Pilot and WingX Pro, and all functioned exactly as expected.

The iPad Mini ships with iOS 6, so you’ll find that all the settings, menus and controls are identical to the other iPads. The primary difference (besides size) is that the iPad Mini uses Apple’s new Lightning connector, so your old 30-pin iPad/iPhone charging cables will not work with this new model. You can purchase a 30-pin to Lightning connector from Apple if you have accessories that require the old style connection. It’s also worth pointing out that the iPad Mini uses the same 5W charger as the iPhone, though you won’t do any damage if you use the 10 or 12W iPad charging brick. 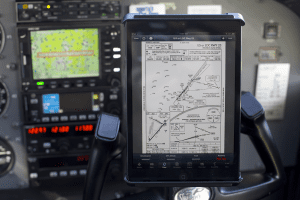 We’ve been flying primarily with the iPad 3 and its high resolution retina display for the past 7 months, but we found that the iPad Mini’s lower resolution screen didn’t detract at all from the readability of the screen. In fact when mounted at normal distance either on a kneeboard or yoke mount, the screen looked nearly as crisp as the iPad 3. The big thing you will notice is that all the buttons and menus are proportionately smaller, so if you have a difficult time pressing touchscreen buttons on the original iPad, you may want to stick with the larger version. With that being said, we found no issues using the device when mounted securely, even in turbulence. IFR approach charts and airport diagrams are easily readable when viewed full screen in portrait mode and do not require any zooming to see the fine print.

The iPad Mini’s side bezel is proportionately smaller than the original iPad, and some may be concerned that they will interfere with on-screen interactions if their thumb is wrapped around the front. Apple has thought about this and adjusted the software accordingly. According to the Apple site:

Rethinking the screen meant we also had to rethink the software behind it. iPad mini intelligently recognizes whether your thumb is simply resting on the display or whether you’re intentionally interacting with it.

You’ll find that the iPad Mini uses the same glass screen, so glare is still an issue for those with well-lit or open cockpits. The key here, just like with the original iPad, is to mount it in a way that you can control the angle at which it faces you to reduce the glare, like with a yoke or suction RAM mount for example. As for battery life, Apple claims 10 hours, so you can expect similar performance to that of the larger iPads. And don’t forget that using an external device like a GPS or ADS-B receiver will use additional power, so 5-7 hours of battery life is more realistic when using it as an in-flight navigator.

As mentioned earlier, the iPad Mini’s smaller footprint lends to additional mounting options, especially in tight cockpits. We’ve found the RAM mounting system to be the best due to its modular construction and flexibility with positioning. For the iPad Mini you’ll want to start with the 7″ Tablet Cradle, which perfectly holds the device. Next choose one of RAM’s 4 mounting options: yoke mount, suction mount, glareshield mount or Beech yoke mount. With the iPad Mini’s smaller size and weight, the yoke mount becomes a much more practical option. It easily mounted on both a Cessna 172 and Piper Warrior yoke during our tests, and worked well in both portrait and landscape orientations. It also does not block the view of the gauges and switches as much when compared to the original iPad.

We next tried out the glareshield mount in a Cessna 172, and found this to be much more useful than with the larger iPad. In the past we found the glareshield mount difficult for most to use since it blocked important gauges and instruments on the right side of the panel. This is no longer an issue with the iPad Mini; mounting it on the right side of the panel did not block anything from view, though it may be a little further away than some may prefer. 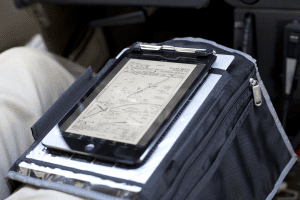 The suction mount works well when fixed to the front window, allowing the iPad to barely hang over the glareshield in the right center section of the panel. We also were able to secure the iPad Mini with the suction mount in the front left window of a Piper Warrior, a spot that was previously too small to mount the larger iPad. This keeps it in close proximity but does not block the view too much out that front side window.

The iPad Mini will not fit in the current models of iPad kneeboards, but it does work well when used with Sporty’s traditional tri-fold kneeboard. The spring-loaded clip will keep it secure in-flight, and you can store the iPad Mini in one of the 2 side zipper pockets.

We’ll keep this section short and sweet — all the Bluetooth and WiFi accessories that work with the original iPad work the same with the iPad Mini, including the Stratus ADS-B receiver, Garmin GLO and GDL-39, plus the Dual Bluetooth GPS. If you own the Bad Elf GPS receiver that plugs into the bottom of the iPad, you’ll need Apple’s 30-pin to Lightning adapter. This allows the Bad Elf to function normally, though some may find it a big awkward with the GPS extending out twice as far.

So is the iPad Mini the new standard for aviation? We’re not quite ready to declare that, since the 10″ iPad screen is still hard to beat for large type and easy to hit buttons. If you fly an airplane with a larger cockpit, or if you already use an iPad and have a mounting solution you like, stick with it. We wouldn’t throw out an iPad 2 or 3 just yet.

But having said that, the iPad Mini is a compelling product for pilots–probably more so for pilots than for the general public, actually. It finally makes the iPad usable on a yoke mount, and all of the aviation apps that run on the larger iPad will work perfectly on the Mini out of the box. On top of that, it’s less expensive than the 10″ iPad (it would make an excellent backup for the full-size iPad, if nothing else). If you’ve been holding off buying an iPad, or if you fly an airplane with a smaller cockpit, the iPad Mini could be a game changer.