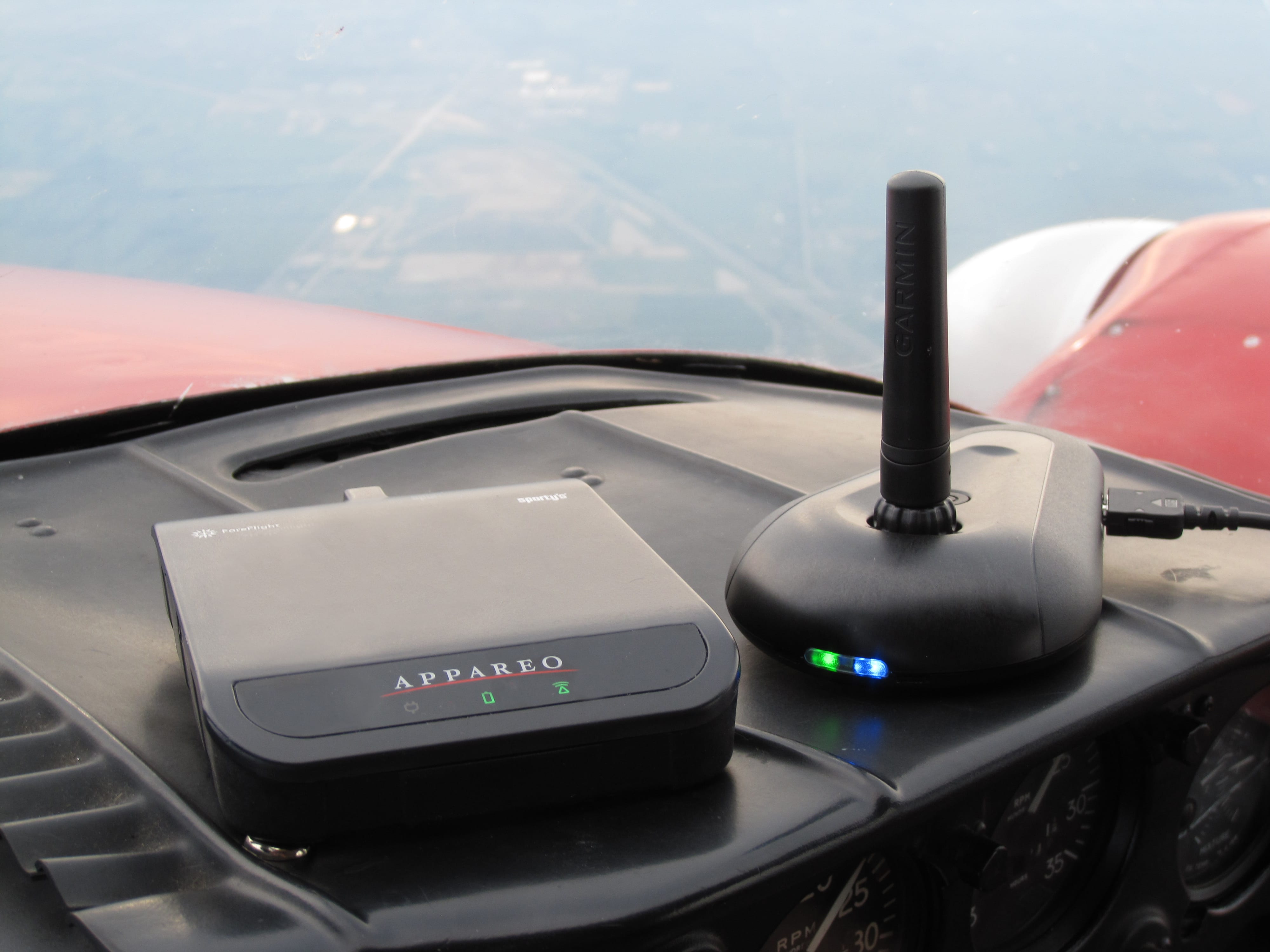 Garmin generated a lot of buzz last month with the release of the GDL 39, a portable GPS and ADS-B traffic and weather receiver. This small antenna receives the signals from ADS-B ground stations in the US, and then wirelessly sends the data using Bluetooth to an iPad running the Garmin Pilot app. Along with the release of the GDL 39 Garmin also made a significant update to the Garmin Pilot app to support these new features, and they did an excellent job with the hardware/software integration. 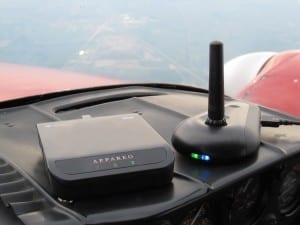 For this product test we flew with both the Garmin GDL 39 and the Stratus from Sporty’s.

To test out the Garmin GDL 39 we recently flew a trip in a Piper Aztec from Cincinnati, OH, to Akron, OH. The weather was forecast to be VFR for the flight, though there was a good deal of precipitation just south of our route in Kentucky–a good test to check out the ADS-B weather radar display on the Garmin app. We also brought along a Stratus ADS-B receiver to compare the weather information with ForeFlight Mobile. It was easy to connect to both devices to the same iPad since the GDL 39 uses Bluetooth and Stratus uses Wifi.

The Aztec is equipped with a Garmin GTN750 panel mount GPS navigator that, among other things, displays traffic from an active-interrogation traffic advisory system (TAS). This displays ALL the nearby traffic (regardless of radar or ADS-B coverage), and allowed us to accurately assess what percentage of traffic was actually being displayed by the portable Garmin ADS-B system.

An important thing to remember with ADS-B traffic is that it’s not continuously broadcast to all aircraft like the weather products. Rather, you must be equipped with a certified/installed ADS-B Out system in order for the traffic picture to be sent back to you. But with the deadline for ADS-B out equipage still 6 years away, very few aircraft have this capability. So the only traffic you will most likely see when using the GDL 39 are those airplanes equipped with ADS-B Out (specifically those with 1090 ES transponders, which are typically airliners). This is no fault of the Garmin’s system, just a reality in this early phase of ADS-B adoption. ADS-B traffic is a complicated subject, and we’ll have more information on traffic in an upcoming post. Garmin also has some great information at their ADS-B Academy educational site. 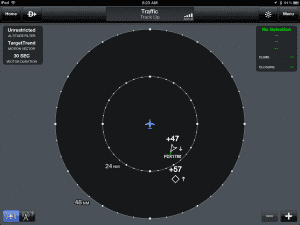 The dedicated traffic page on this flight was only showing aircraft equipped with 1090 ES transponders, which were typically airliners (FedEx flight 1780 in this example).

After pairing the GDL 39 with the Garmin app you’ll see a new option in the Home menu to bring up the dedicated traffic view. This sophisticated traffic display is very similar to what’s shown on Garmin’s panel mount traffic systems. You can configure several options here, including altitude filters to show unrestricted traffic, traffic above (useful during climbs), a normal view setting (useful during cruise), and a traffic below view (useful during descents).

You can also toggle the motion vector originating from the traffic to show either a relative vector (TargetTrend is what Garmin calls it) or absolute vector. The relative vector is particularly useful since it shows the aircraft’s motion relative to your position and groundspeed. For example, if you were overtaking an aircraft that was heading in the same direction as you but at a slower ground speed, the relative vector would actually be pointed opposite its direction of flight indicating that you are overtaking the aircraft. You can also tap any of the traffic targets to display N#, direction, ground speed, pressure altitude, climb/descent rate and closure information.

Traffic can also be displayed on the moving map, and this overlay is enabled with a setting located under the Menu button in the upper right corner of the screen. At the upper left of the map are status icons to indicate what type of traffic you are receiving, either Air-to-Air targets coming directly from aircraft equipped with 1090 ES out or TIS-B traffic originating from ADS-B ground stations. Since the Aztec does not have ADS-B Out capability and cannot ping the ADS-B ground stations for the TIS-B traffic picture, we only saw a few traffic targets show up with the system for the entire flight. 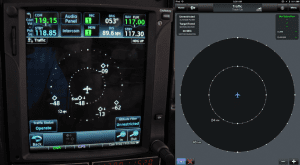 We were able to see all in-range traffic targets on the installed Garmin active-traffic system in the Aztec, and probably 5 – 10% of those showed up through the GDL 39 on the Garmin app. All but 1 of the traffic targets were airliners transitioning the terminal areas, and the 1 GA aircraft that did show up was about 70 miles away. At one point while passing through the Columbus Class C airspace we had 5 airplanes show up on the installed traffic system, while the ADS-B display on the Garmin app showed none of them. And we had 2 traffic callouts from ATC near Cleveland that showed on the installed active traffic system, but again neither showed up over ADS-B. This is no fault of the GDL 39, but just goes to show that a portable ADS-B traffic system provides a very incomplete traffic picture unless you have ADS-B out in your aircraft.

Most pilots will buy the Garmin GDL 39 for it’s subscription-free ADS-B weather capability, and the performance of this feature is excellent. The system began receiving data from ground stations just a few hundred feet after takeoff from the Cincinnati area, and began displaying regional radar not 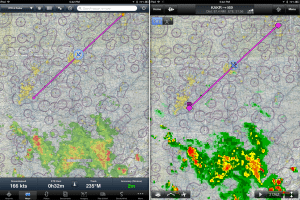 The ADS-B weather performance was similar on both the ForeFlight app with Stratus (left) and the Garmin Pilot app with GDL 39 (right). Note that the radar opacity was lowered slightly on ForeFlight when the screens were saved.

long after. Similar to the ForeFlight/Stratus combo, the weather products can be displayed right on the moving map on top of sectional and en route charts.

One thing to take note of is that there are two options for radar on the map overlay settings–you need to choose the 2nd option called “Radar (FIS-B).” The “Radar” option shows internet-based weather radar when on the ground. And like ForeFlight/Stratus, the Garmin app combines the 250NM regional radar and national radar picture seamlessly with the same overlay toggle. See the screen at the right comparing the the same weather side by side (the radar opacity is turned down slightly on ForeFlight). 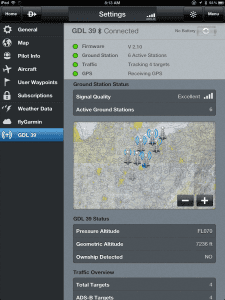 The Garmin app displays all the ADS-B weather products, including NEXRAD radar, METARs, TAFs, Winds Aloft, Pireps, TFRs, Airmets/Sigmets and NOTAMs. The status page provides complete system information, including GDL 39 battery status (if installed), weather age, type and number of of traffic targets received, and even a map showing number, location and signal strength of ADS-B stations from which you’re receiving data. This is a handy display for tracking when you might fly out of ADS-B coverage.

One unique feature of the GDL 39 is that it continually caches the weather data to the antenna’s internal memory. This means you don’t have to keep the Garmin app active throughout the entire flight; once it wakes up from sleep mode or is switched to from another app, the GDL 39 will automatically send the latest weather data and not have to wait for the next data transmission from the ADS-B ground stations. Garmin Pilot can also loop the radar image, so you get an idea of a storm’s movement.

At $799 the GDL 39 is in the same price range as other portable ADS-B receivers on the market, and has the added benefit of integrating both 978 UAT and 1090 ES receivers for traffic. As mentioned above though, you will only see a small percentage of nearby traffic unless you are equipped with a compliant ADS-B transponder in your aircraft. The weather reception was nearly identical to Stratus, and the tight integration with the Garmin app is a big plus.

One other feature that may be of interest is the GDL 39 can display weather on Garmin portable GPSs in addition to the iPad, including the entire aera series, the 696/695 and 796/795. This is a nice way to get some added value out of an older GPS you may have sitting on the shelf. A different part number should be ordered for this application.

Garmin offers an optional battery for those who don’t have access to 12/24v power in their airplanes, and they’re even tossing in the battery for free if you order before August 31. Click here for more info on the Garmin GDL 39. 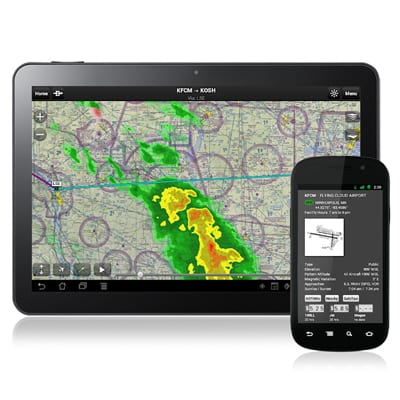 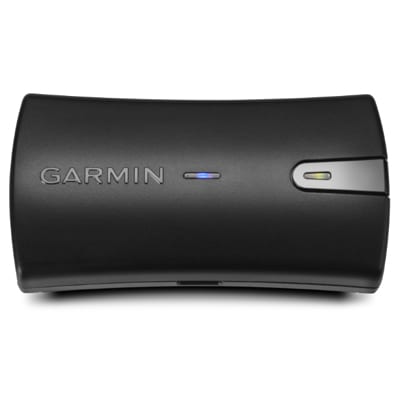