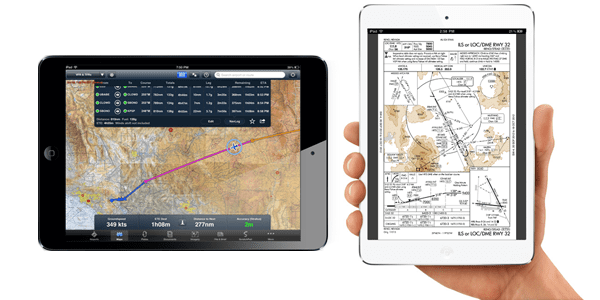 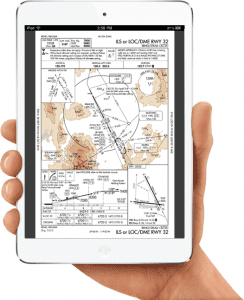 Most pilots will agree that the iPad is hands down the best consumer product currently available to serve as an electronic chart bag (EFB) in the cockpit. In addition to the extensive list of features contained in the hardware itself, there are over 100 dedicated aviation apps designed exclusively for the iPad. It’s not perfect though, and a common complaint is that it is too big to use in the tight constraints of general aviation airplanes.

Size, however, will no longer be an issue with today’s announcement of the iPad Mini from Apple. The new iPad Mini measures 5.3″w x 7.87″h, weighs less than half of the larger model, and can used with one hand. The 7.9″ diagonal screen has the same resolution as the iPad 2, meaning all your existing aviation apps will run seamlessly on the new model. It retains the same 10-hour battery life as the other iPads, comes in 16/32/64 GB storage sizes, and starts out at $329 for the WiFi-only model. Models are also available with AT&T/Verizon/Sprint 4G capability, and these include an internal GPS/GLONASS receiver.

The iPad Mini replaces the traditional 30-pin charging connector with Apple’s new Lightning connector, which means you’ll need to replace your existing charging cables or get one of Apple’s 30-pin to Lightning adapters. The good news is that the iPad Mini retains WiFi and Bluetooth capability, so all your wireless GPS & ADS-B receivers will work just fine with this new model.

The combination of reduced weight and physical size will make it ideal for mounting on a yoke or side window with the 7″ Ram Cradle, and will be much less obtrusive when used with a kneeboard. And while the iPad Mini is very similar in specs to existing smaller tablets from Amazon and Google, we think the immediate availably of high-quality aviation apps from companies like ForeFlight, Garmin and WingX Pro will make it a natural fit with pilots.

In addition to the iPad Mini, Apple also announced a new 4th generation iPad. This improved model primarily adds a faster processor and the new Lightning connector. Pre-orders for the iPad mini and iPad 4 will start on Friday, October 26, with the Wi-Fi models shipping on November 2 and the cellular models shipping two weeks later.

Which iPad should I buy?
30 replies