Since the iPad Air was first revealed in 2013, it has filled a sweet spot with customers who want a modest upgrade over the base model full-size iPad but don’t need the power user features of Apple’s Pro line of mobile tablets. Today, Apple announced the 5th iteration of lightweight tablet with a heavy comparison to laptop computers in its price range. 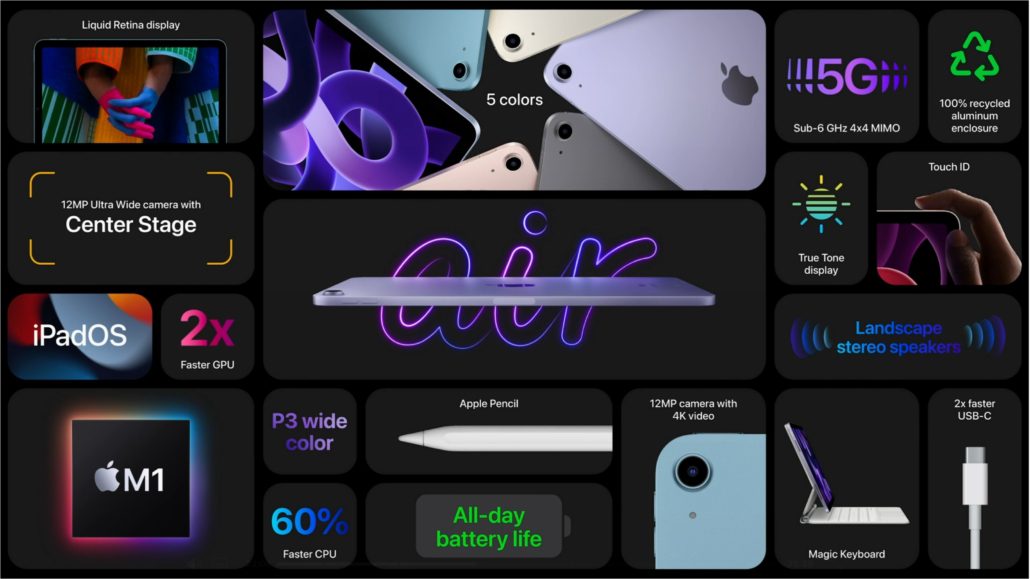 Likely the most important improvement over the previous 4th gen iPad Air is the upgraded processor. The newest iPad Air now comes installed with Apple’s very own home-grown M1 processor. This replaces the previous use of the A14 Bionic chip. The M1 processor has seen success first in Apple’s computers, then with the iPad Pro line.

“This is the same M1 chip that we brought to iPad Pro, and the 8-core design of the CPU delivers up to 60% faster performance over the A14 in the previous generation of iPad Air,” announced Angelina Kyazike, Engineering Program Manager, iPad. “The 8-core GPU delivers amazing graphics performance — up to twice as fast in fact, M1 in the new iPad Air makes it faster than the fastest competitive tablet, and the new Air is up to two times faster than the best-selling Windows laptop in its price range.”

Practically speaking, pilots should continue to see improvements such as faster loading navigation maps and overlays. This also lays the ground work for new features from our favorite app developers. This also aligns the iPad experience with that of Apple’s traditional computing platforms such as MacBook and iMac.

If you opt to spend a little extra and buy a data capable iPad Air, you’ll now be able to connect via 5G for ultra high speed downloads while on the go. Apple says that 5G can reach “peak speeds of up to 3.5Gbps in ideal conditions.” The new iPad Air also has eSIM and Wi-Fi 6 support. It’s available in both cellular and non-cellular models. For connecting peripherals and transferring data, the USB-C port is now up to 2x faster than the previous generation, with data transfers up to 10Gbps, so importing large photos and videos is even quicker. The port connects iPad Air to a vast ecosystem of USB-C accessories, including cameras, external storage, and displays with up to 6K resolution.

Like its predecessor, the new iPad Air is compatible with the $129 Apple Pencil, which magnetically attaches to its size, as well as the $299 Magic Keyboard. It’ll also work with the $179 Smart Keyboard Folio and $79 Smart Folio covers. It uses Touch ID built into its power button as its biometric security. The iPad Air 5 also comes loaded with iPadOS 15. Read our complete pilot’s guide on Apple’s most current mobile operating system.

The fifth-generation iPad Air starts at $599 for the base model — the same price as its predecessor. It will be available to pre-order on Friday. March 11. It’ll ship out to customers on the following Friday, March 18.

Will The New iPad LiDAR Scanner Change The Game For Pilots?

Five tips for flying with the iPad at night