Blog - Latest News
You are here: Home1 / Beginner Tips2 / Five tips for flying with the iPad at night

For most general aviation pilots flying at night is a pretty rare event, making up less than 10% of hours logged. But there are some real advantages to flying after sunset, including smoother rides and less traffic. Before the iPad, we relied on flashlights and other gadgets to light up the cockpit and view charts in the dark. While you’ll still need a flashlight for preflight and as a backup lighting source (we really like this one by the way), the days of holding a mini-Maglite in your mouth and shining it down on a paper sectional are gone thanks to the iPad’s backlit screen.

But just because the iPad solves part of the night lighting equation doesn’t mean you can just hop in the airplane and start using it the same way you do during the day. Here are some things to consider the next time you go flying at night with your iPad.

1. Dim the iPad screen. Before heading out to the dark cockpit, make a point to set the iPad’s screen brightness control to the lowest possible setting. That way the screen won’t come on at full brightness when you turn it on for the first time in the airplane and ruin your night vision. To adjust this, bring up the iPad’s Control Center by sliding your finger down from the top right corner of the screen and use the brightness slider. 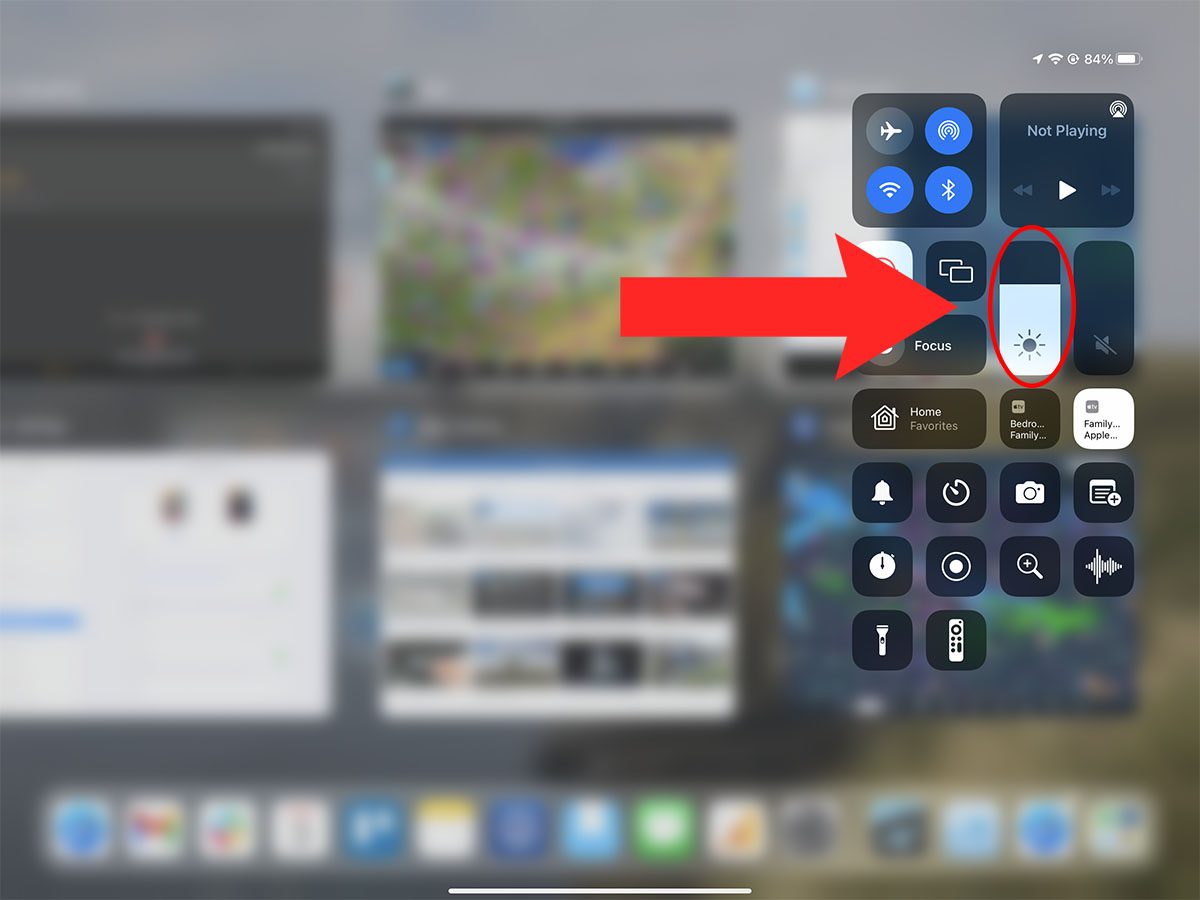 2. Set screen to Dark mode. After setting the screen brightness to the lowest value, go into the main iPad settings and choose Display & Brightness. from here, you can change the Appearance setting from Light to Dark, which will make most background and menu colors black instead of light gray. This can make a big difference at night, cutting down on a lot of night vision-destroying light. You can also set this feature to come on automatically based on time of day (this can be adjusted by tapping the Options menu underneath it). 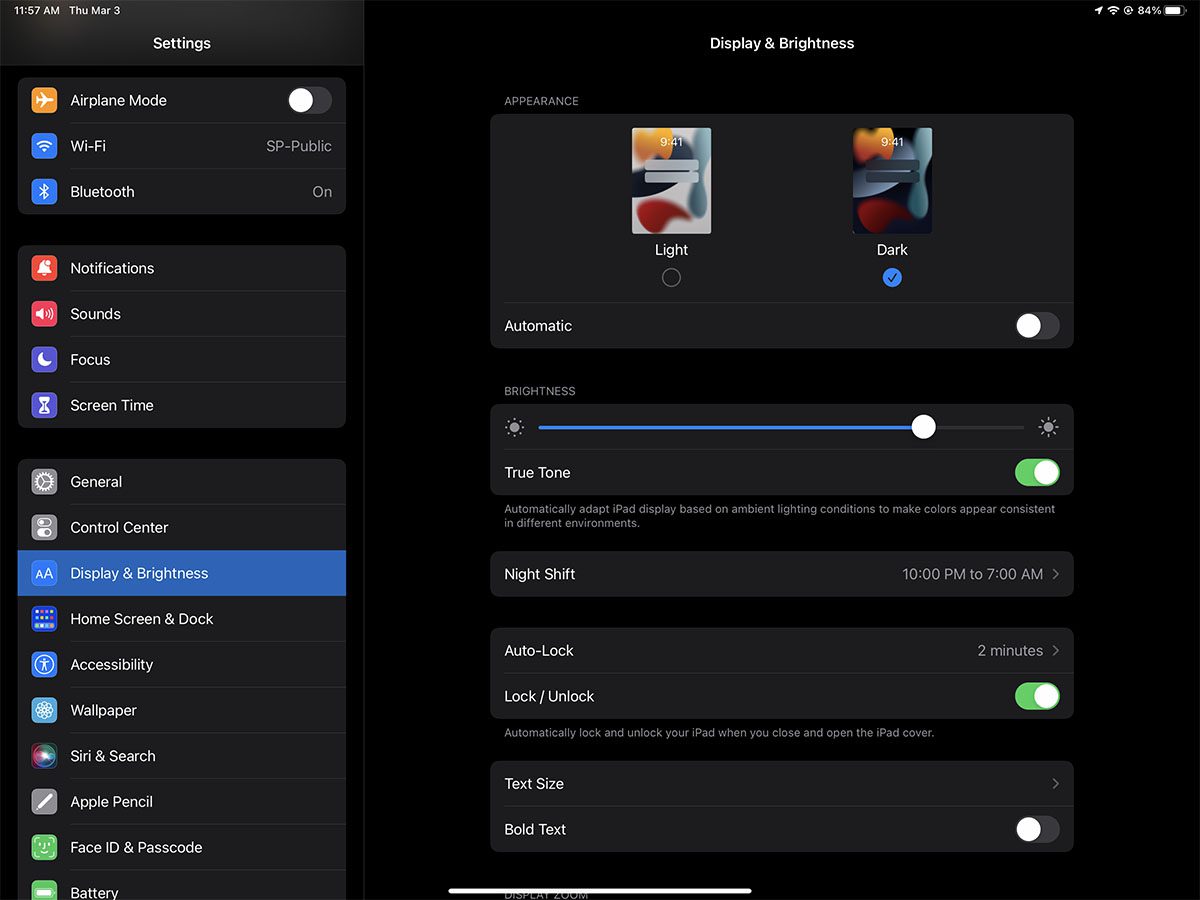 3. In-app screen dimming. In our experience even the lowest screen brightness setting can still be too bright once your eyes adjust to low light at night, especially when viewing the congested yellow areas of a sectional or a bright white instrument approach chart. Fortunately, most apps provide options for night (or dark) modes, along with a setting that allows you to dim the screen even further to a level that’s easier on the eyes:

On the Maps screen, tap the Settings button (gear shape) at the top, and adjust the slider labeled Screen Brightness. This works in conjunction with the iOS screen brightness setting but allows you to dim the screen even more. Just make sure that when you open ForeFlight again the next day to bring this back up again for normal viewing. Directly under this control is an option to invert chart colors, which will provide a dark view for sectional and en route charts. This makes a big difference, especially on IFR en route charts, which are mostly white. 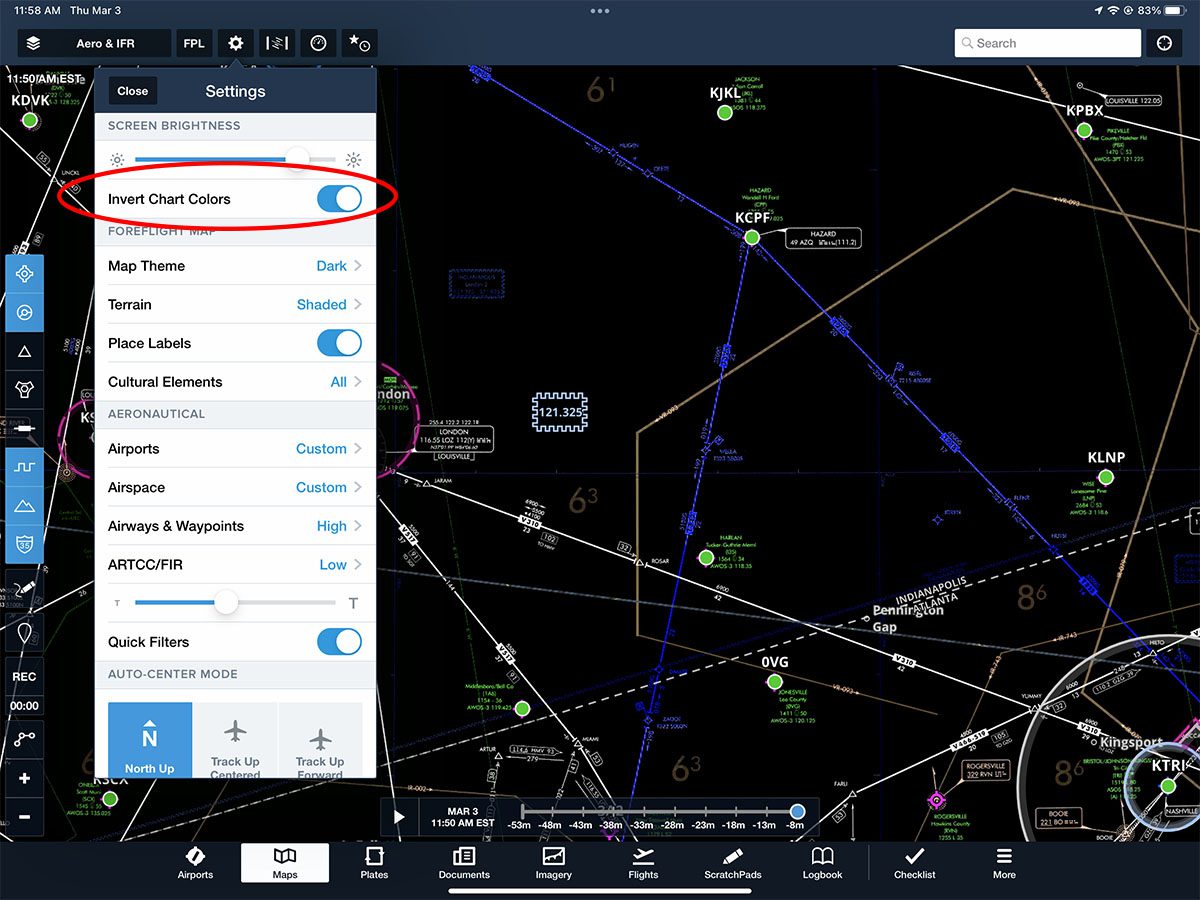 ForeFlight’s Aeronautical Maps layer also offers a Dark Map Theme (enabled from the Map Settings) that will activate a dark blue map background that’s easier on the eyes at night. 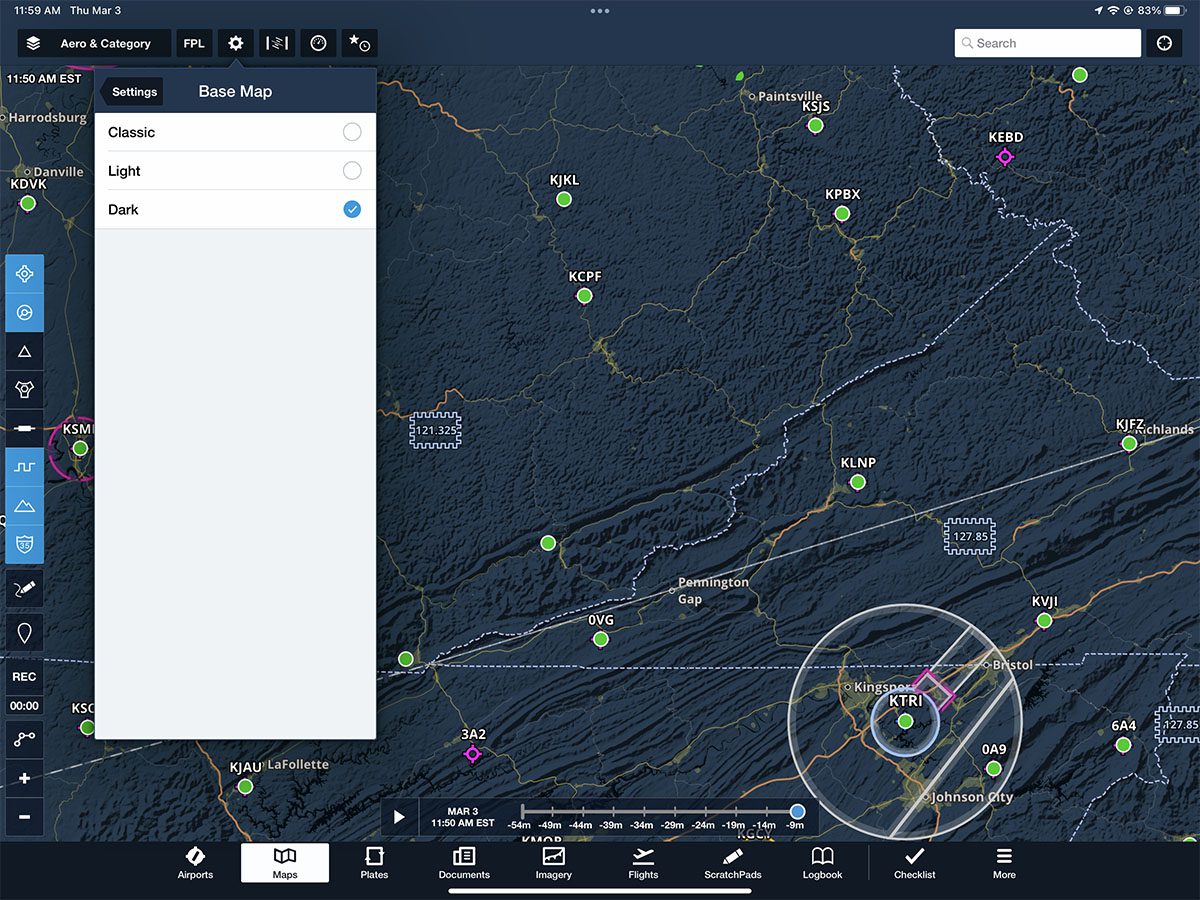 When in the Plates section of the app, you’ll find a separate switch here to invert the chart colors for terminal procedures or adjust brightness again. 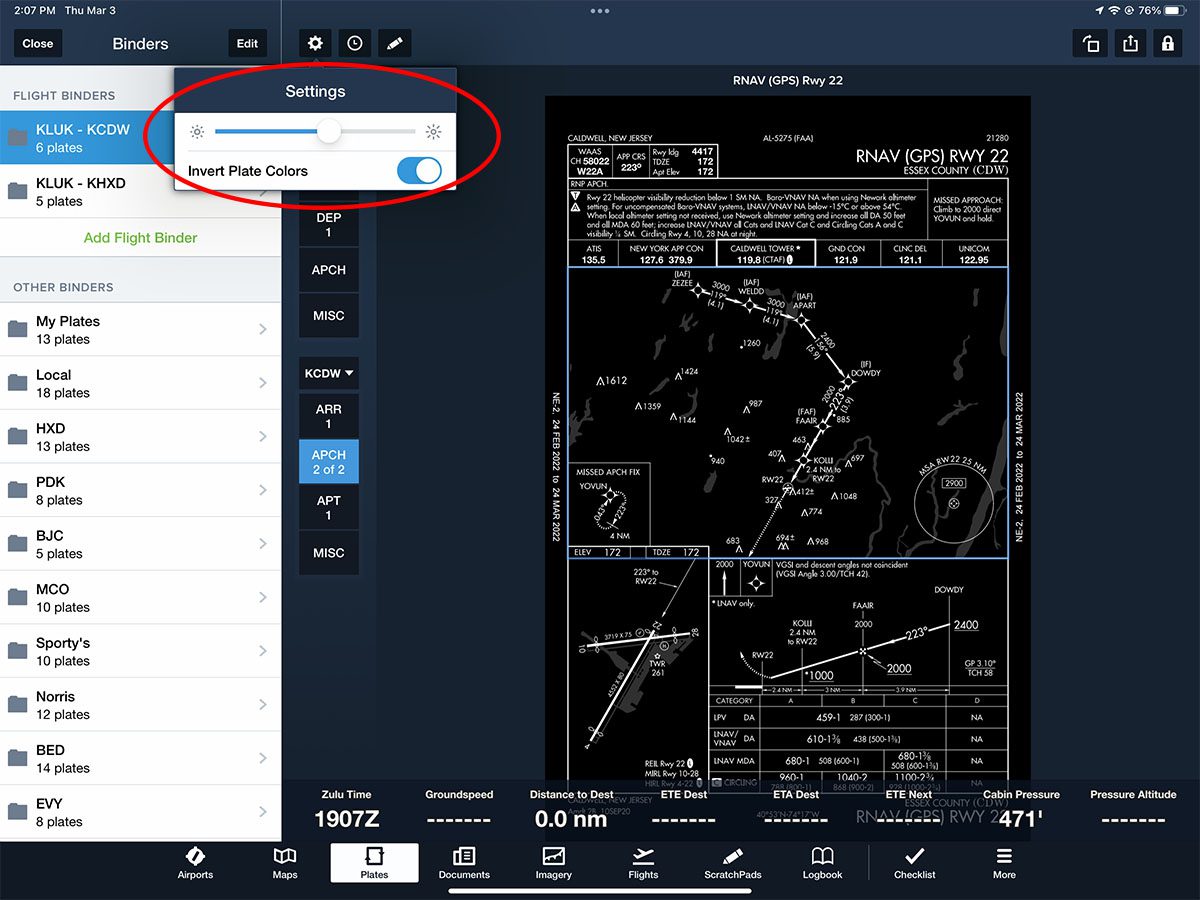 Finally, head over to the main ForeFlight Settings screen in the More Tab, and change the App Theme to Dark, which will change the background colors used throughout the app to a dark blue. This is particularly helpful for menus. Note that you can also choose System, which will sync ForeFlight’s theme with your iOS settings (see 2 above).

This app has an overall black theme anyway, so much of it is well-suited to night flying anyway. But there is also an in-app brightness slider, accessed from the Tools menu at the top right of the screen. 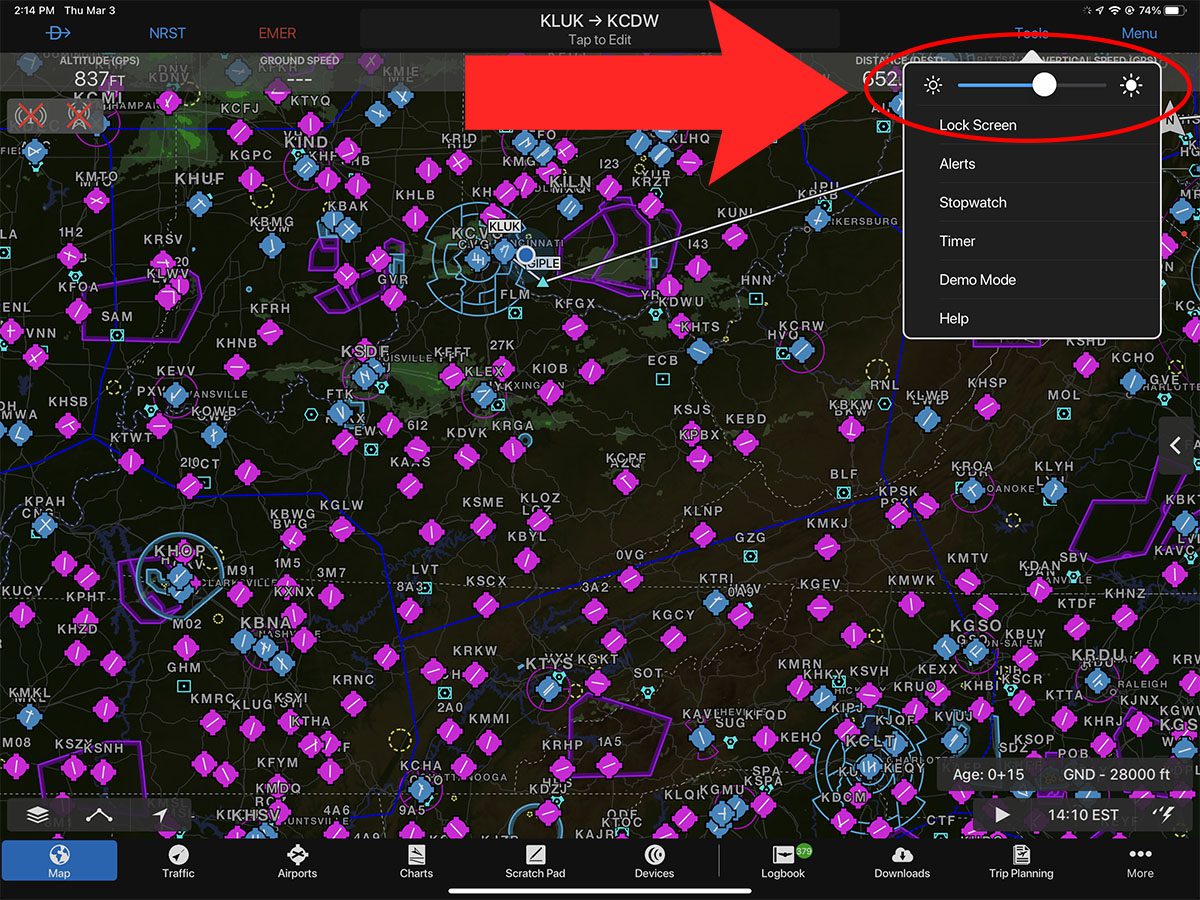 Night mode is activated from the Menu button at the top right of the Maps view. This will switch the VFR/IFR data-driven map screens to a darker color scheme and cut down on the amount of light emitted from the iPad. Unlike ForeFlight, this will not affect the actual FAA charts, like the IFR en route, but it will affect approach plates. 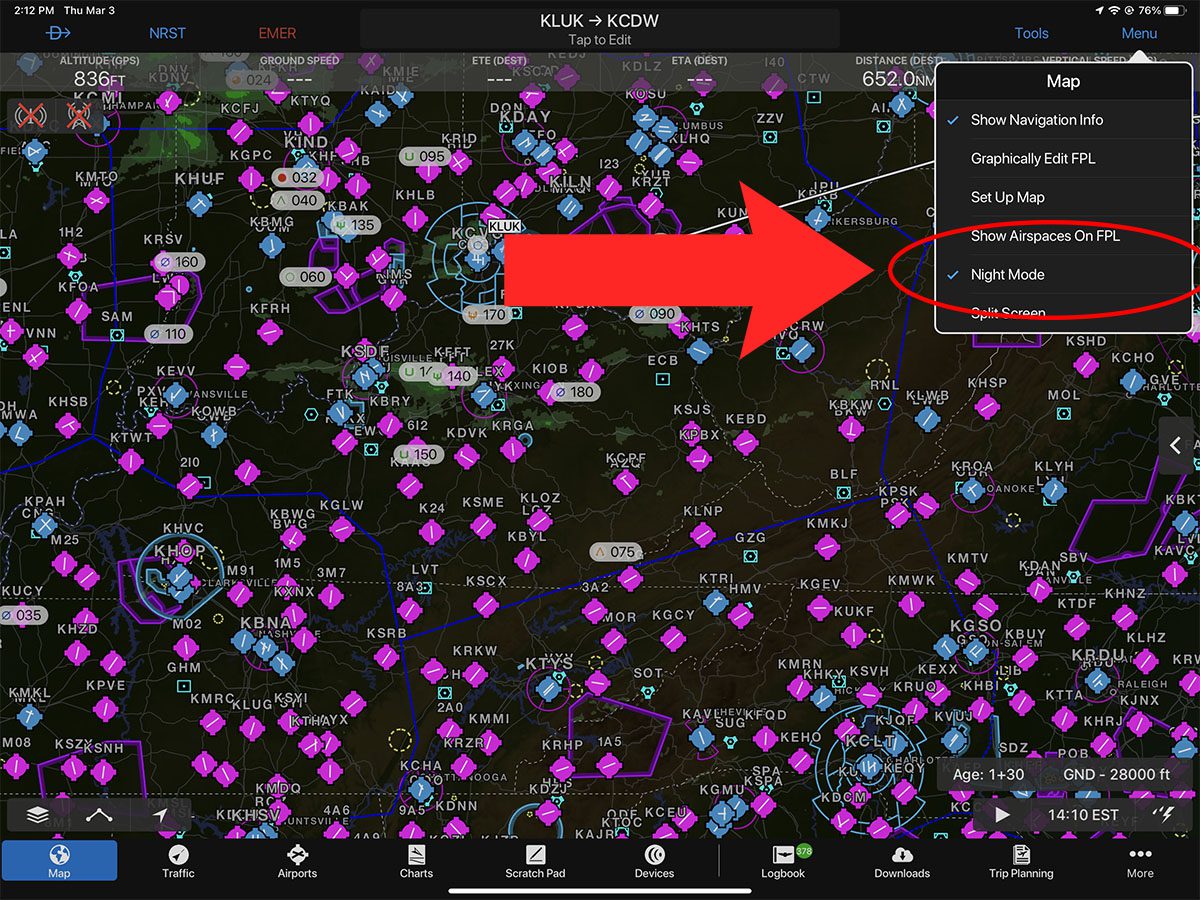 This app includes several options to assist with night flying and the iPad. On the Moving Map page you’ll see a light bulb button at the top right with several night-enhancement settings, including in-app screen dimming, nighttime charts, white-on-black charts (useful when viewing approach charts or airport diagrams) and finally a toggle for even more screen dimming if needed. 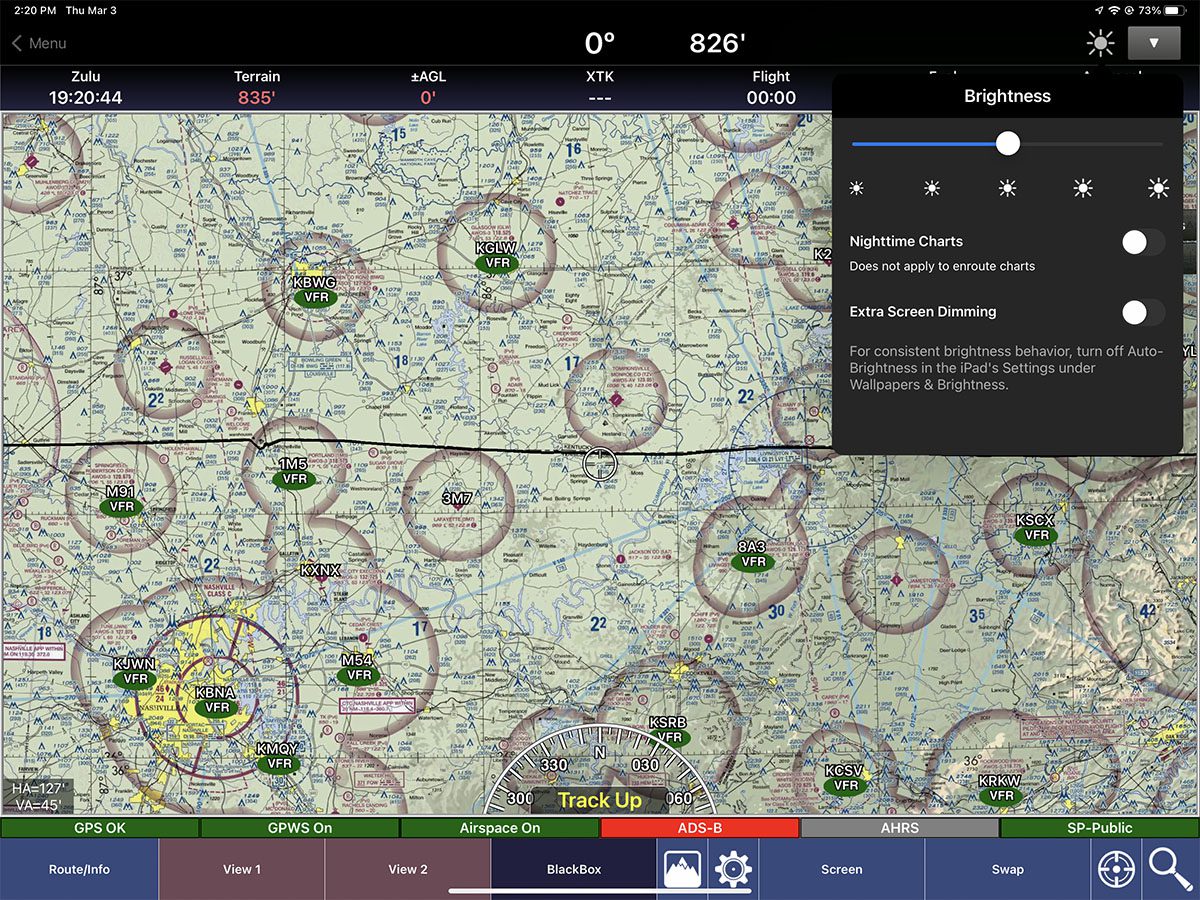 4. ADS-B Receiver Status Light Dimming—just like you dim the annunciator lights on your instrument panel at night, you’ll want to consider doing the same thing on your ADS-B receiver. For example, if you’re flying with a Stratus ADS-B receiver, this is accomplished directly from the ForeFlight app. Tap the Settings button at the top of the map page (gear button), scroll to the bottom of the window and select Stratus, and then scroll down again about midway until you see a slider for LED Brightness. Setting this to a lower setting will decrease the brightness of the status lights on the front of the Stratus. 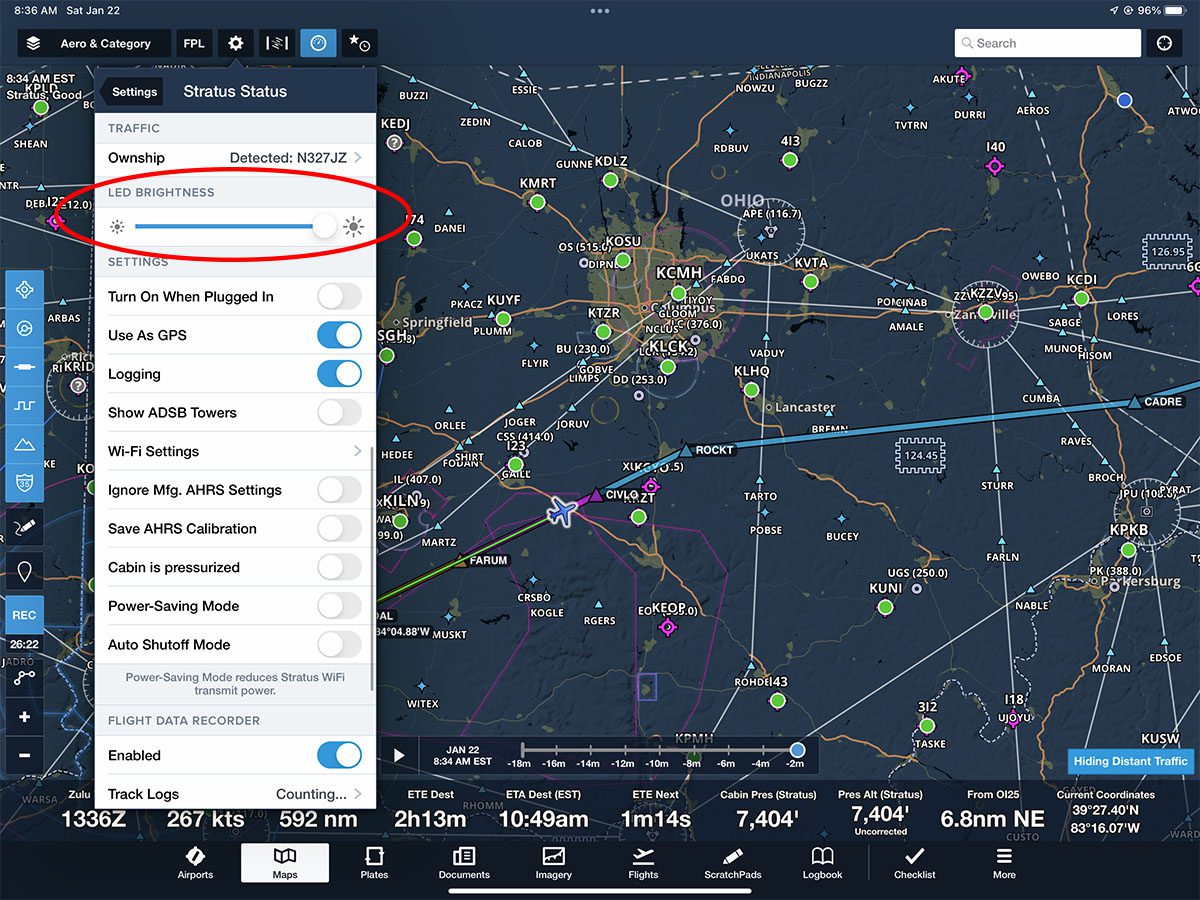 5. Use The iPad as a flashlight. Like the iPhone, the iPad has a built-in flashlight utility that uses the camera flash to illuminate an area—it’s accessed from the Control Panel. This is helpful as a last ditch effort to light up the area, but it can damage your night vision because it’s white light. There are free flashlight apps available (like this one) that use your screen to create the light. The benefit here is that you can both turn down the intensity and pick another color that is more night vision-friendly, like red. 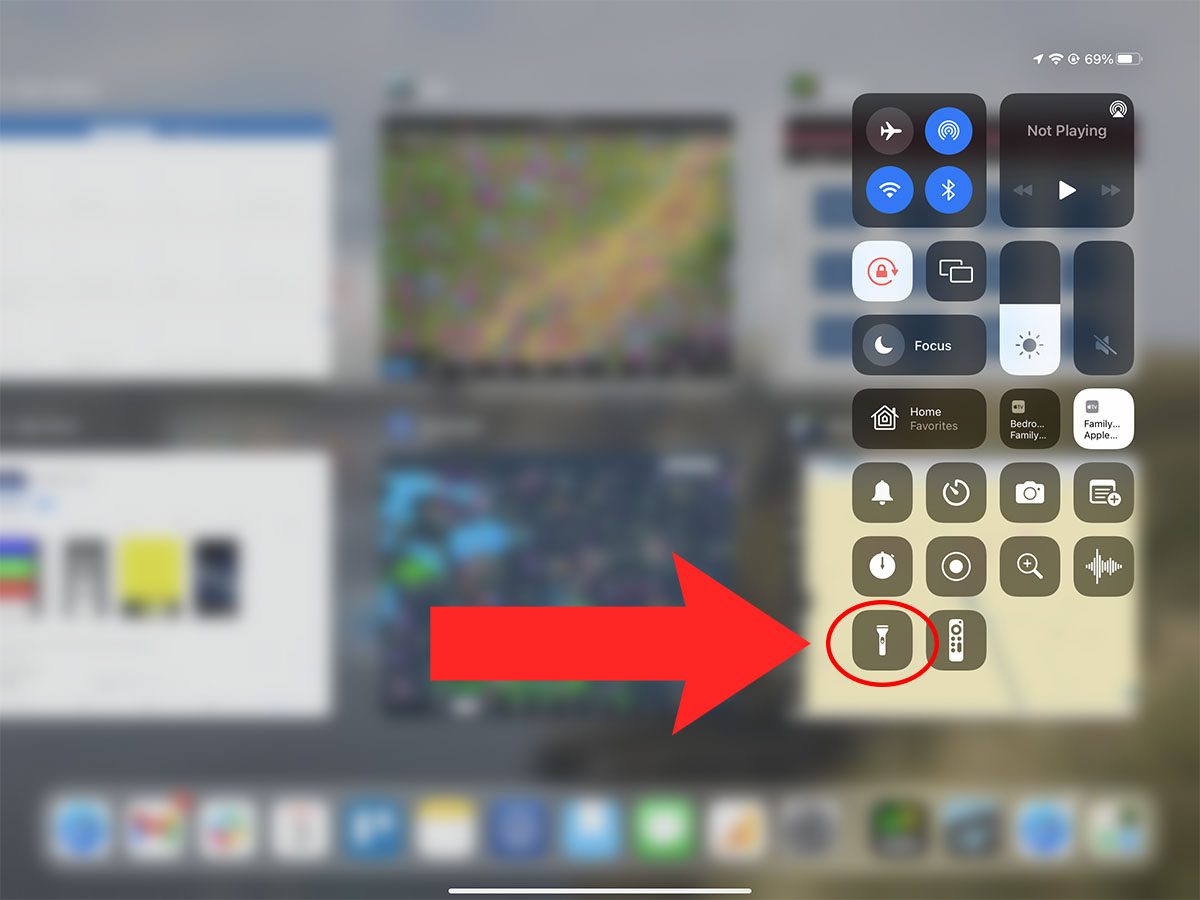