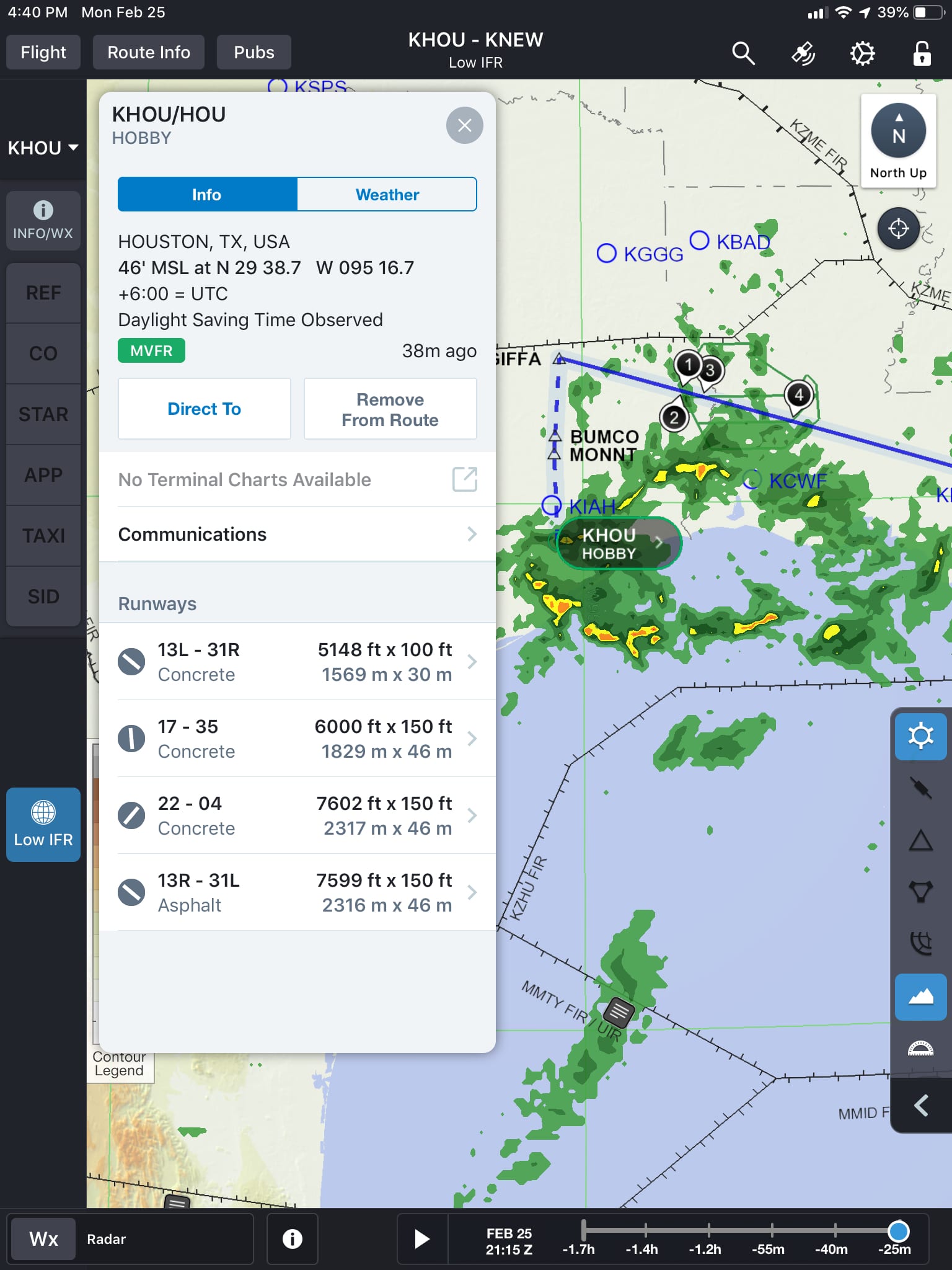 Most U.S. airlines today rely on Jeppesen’s FlightDeck app, which was initially launched as a digital chart viewer to organize and display Jepp charts in the cockpit. The charts were the main focus here, and the FlightDeck app didn’t include much in the way of flight planning, weather or moving map features that GA pilots had become accustomed to using in apps like ForeFlight, Garmin Pilot and FlyQ.

Up until recently, there was such a large disparity in features between these two classes of apps that we’d regularly hear from airline pilots who liked to “sneak” their personal iPhone or iPad onto the flight deck to run ForeFlight and use its more advanced features alongside the company-issued Jeppesen app. 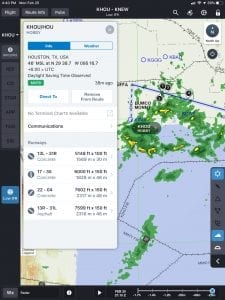 Fortunately, the gap in features is beginning to shrink, thanks to the partnership between ForeFlight and Jeppesen that was established back in 2017. In simplified terms, Jeppesen’s focus would be on supplying high-quality data to ForeFlight, in the form of worldwide terminal procedures and data-driven maps, and in return, ForeFlight would help Jeppesen build up its pro-level FlightDeck application with more capable flight planning and moving map features.

This first real benefit of this collaboration appeared shortly after the partnership was announced in the summer of 2017, when ForeFlight added the ability to view Jeppesen charts right in the ForeFlight app. And now with the recent release of FlightDeck Pro X 4.0, airline pilots can now benefit from a much-improved app from Jeppesen, thanks to ForeFlight’s input.

Here’s a quick rundown of what’s new in the latest release of Jeppesen FlightDeck, giving an inside look at the app today’s pro pilots are using.

While the latest version of FlightDeck retains a somewhat similar layout as previous versions, pilots familiar with ForeFlight will instantly recognize the influence in the app. The design and layout feel much more polished, and the app’s buttons and controls are much more intuitive to use. There’s a redesigned Toolbar at the top of the screen, that provides quick access to Flights, Route Info, Publications, GPS Status and Settings.

The updated Flight Drawer is much easier to use now, and is the place to add departure and destination airports, routing and SIDs/STARs. You can save routes, or share them wirelessly to another nearby iPad. 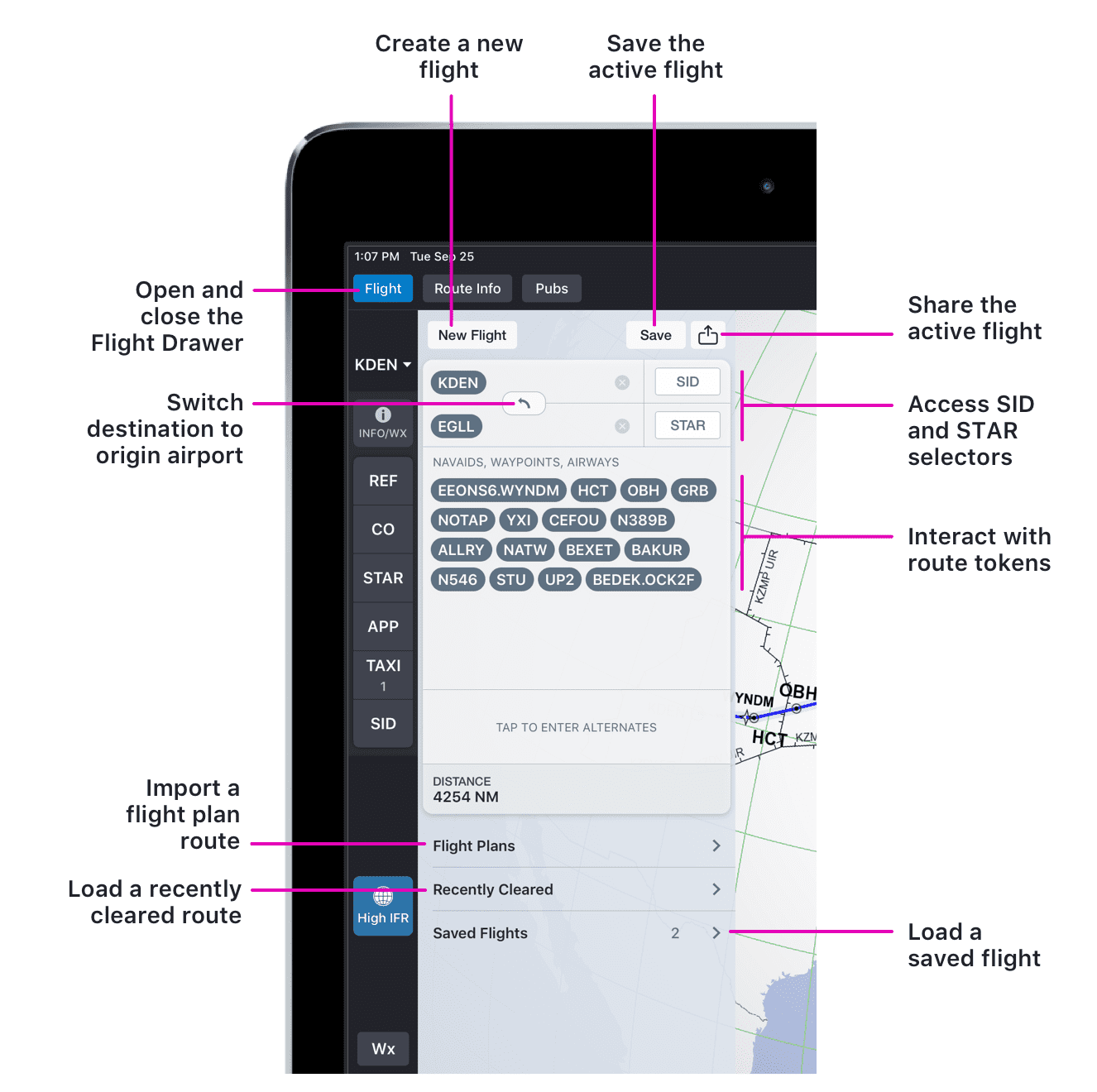 You can tap a route token (the small blue circles with waypoint IDs) to display more info about it or add or remove it from your route. You can also drag and drop the location of the token in the route string to edit your route, just like in ForeFlight. If there is an error associated with a route object, FliteDeck Pro X displays the route token in amber. This color-coding enables you to quickly identify specific errors and identify when there may be more than one error in the route string. 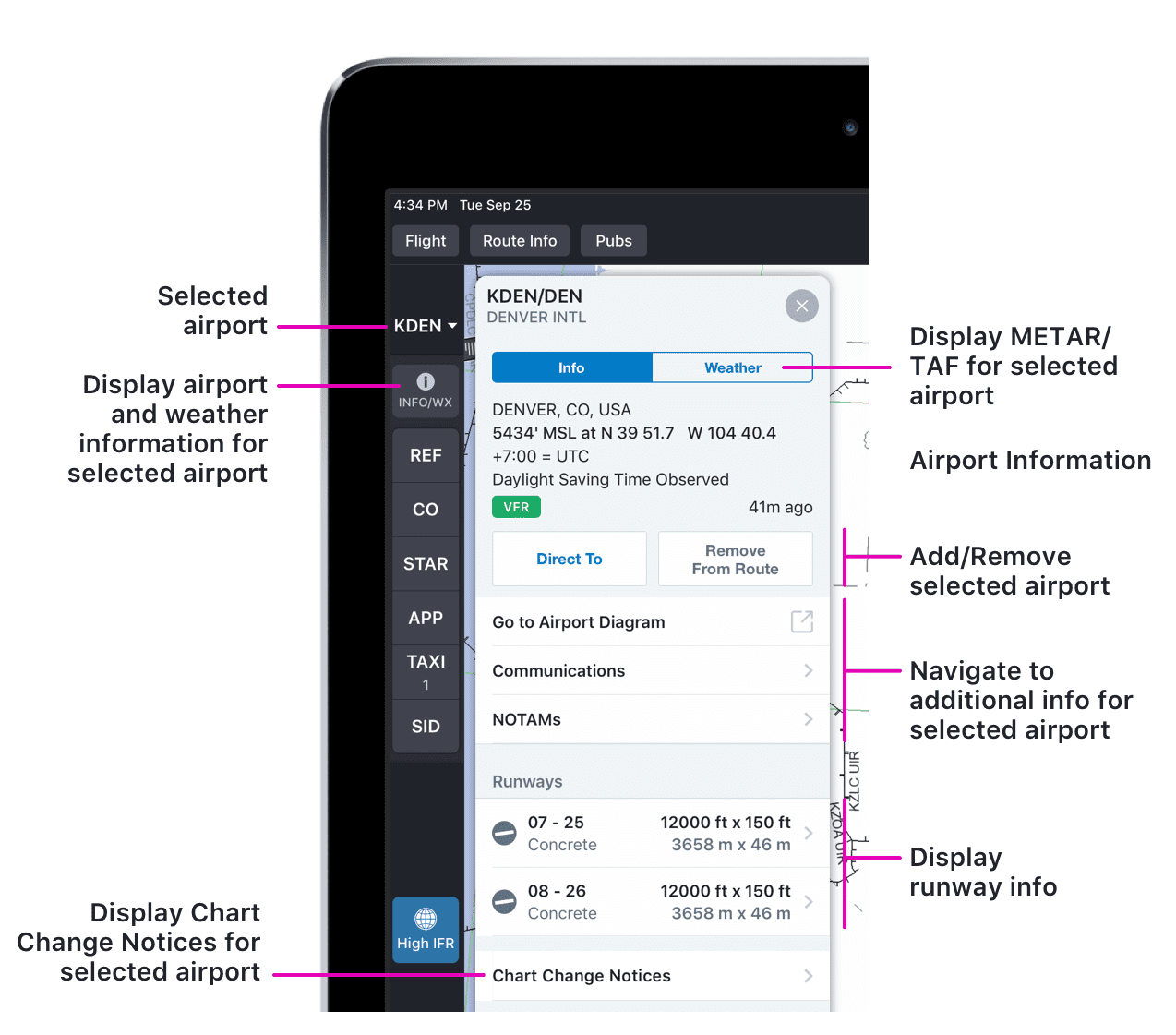 When there is at least one NOTAM associated with a chart, FliteDeck Pro X displays a NOTAMs button at the bottom of the chart display. The number of NOTAMs associated with the chart is indicated on the button. 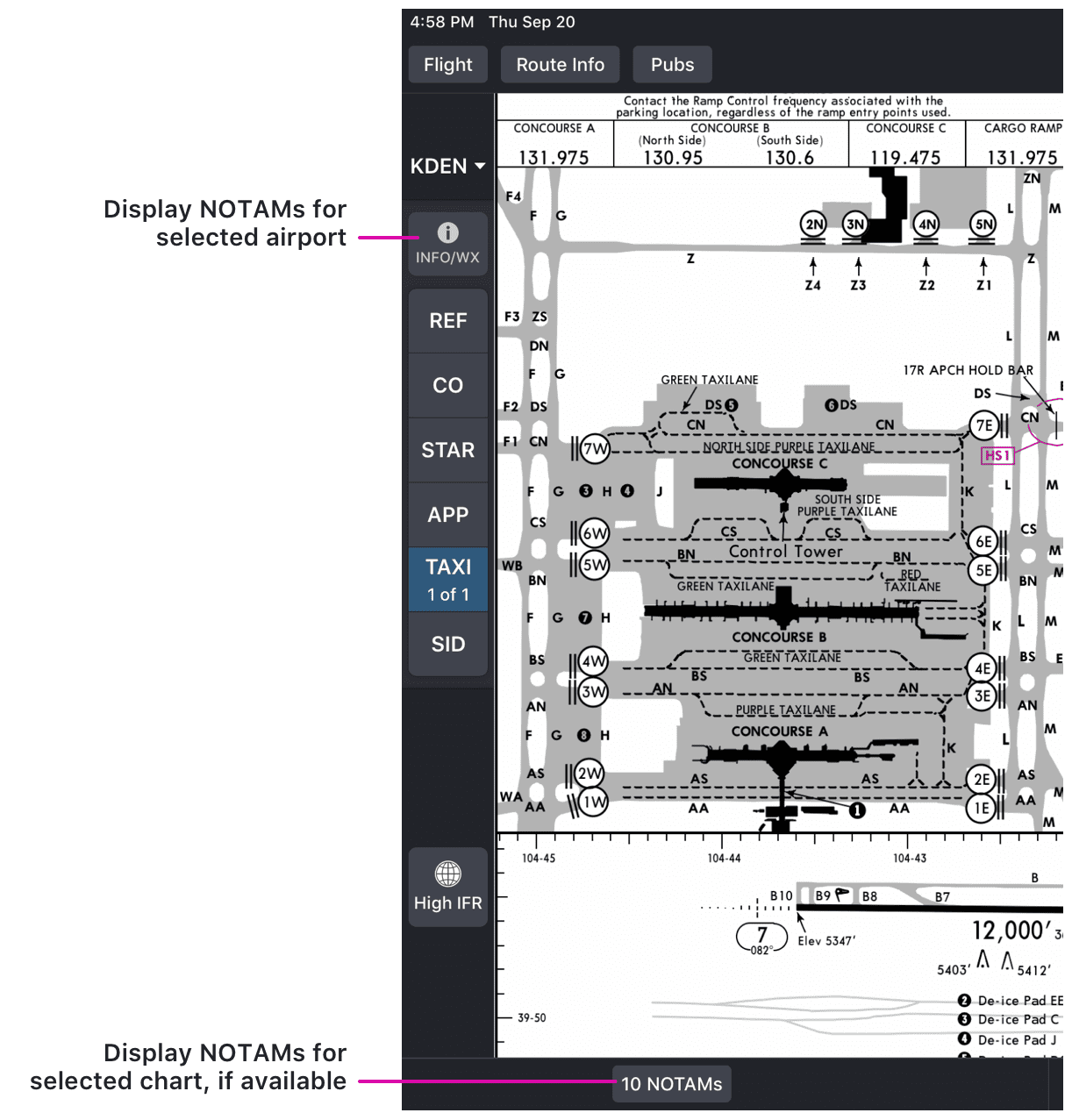 FlightDeck Pro X provides a more streamlined interaction for selecting SID and STAR procedures from the Flight Drawer. Now, for example, when issued a runway change, instead of cycling through procedure, transition, and runway popovers, you just need to tap the SID or STAR button from Flights and make the necessary changes. 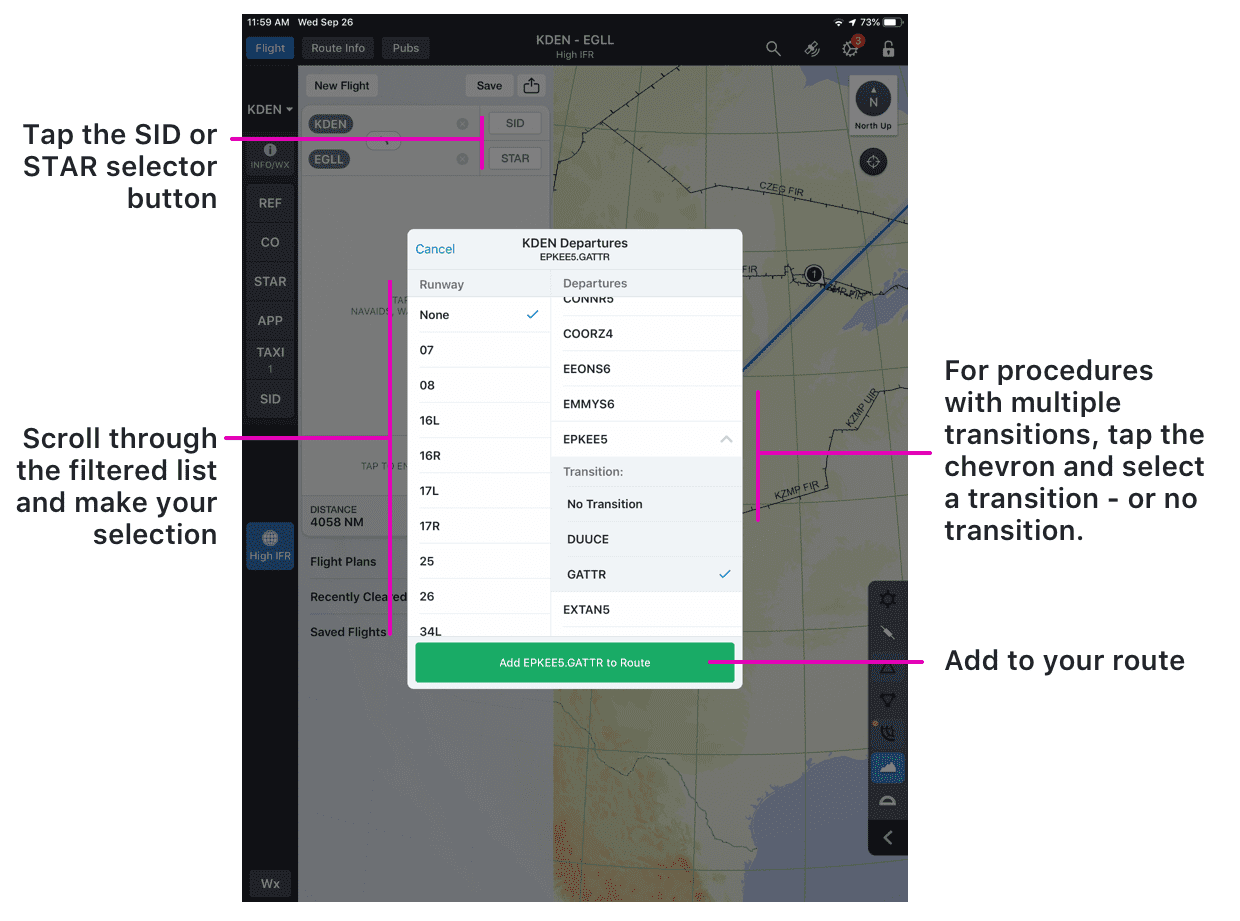 While the FlightDeck app does not provide support for in-flight ADS-B or SiriusXM weather, the pre-flight weather imagery on the moving map is much easier to use and is more responsive. The weather data is sourced from the Weather Company, and offers Radar, Icing, Turbulence, Echo Tops, Winds/Temps Aloft and Lightning layers. New controls were added to the bottom of the screen to replay radar imagery, or change altitudes and forecast times for the other weather layers. 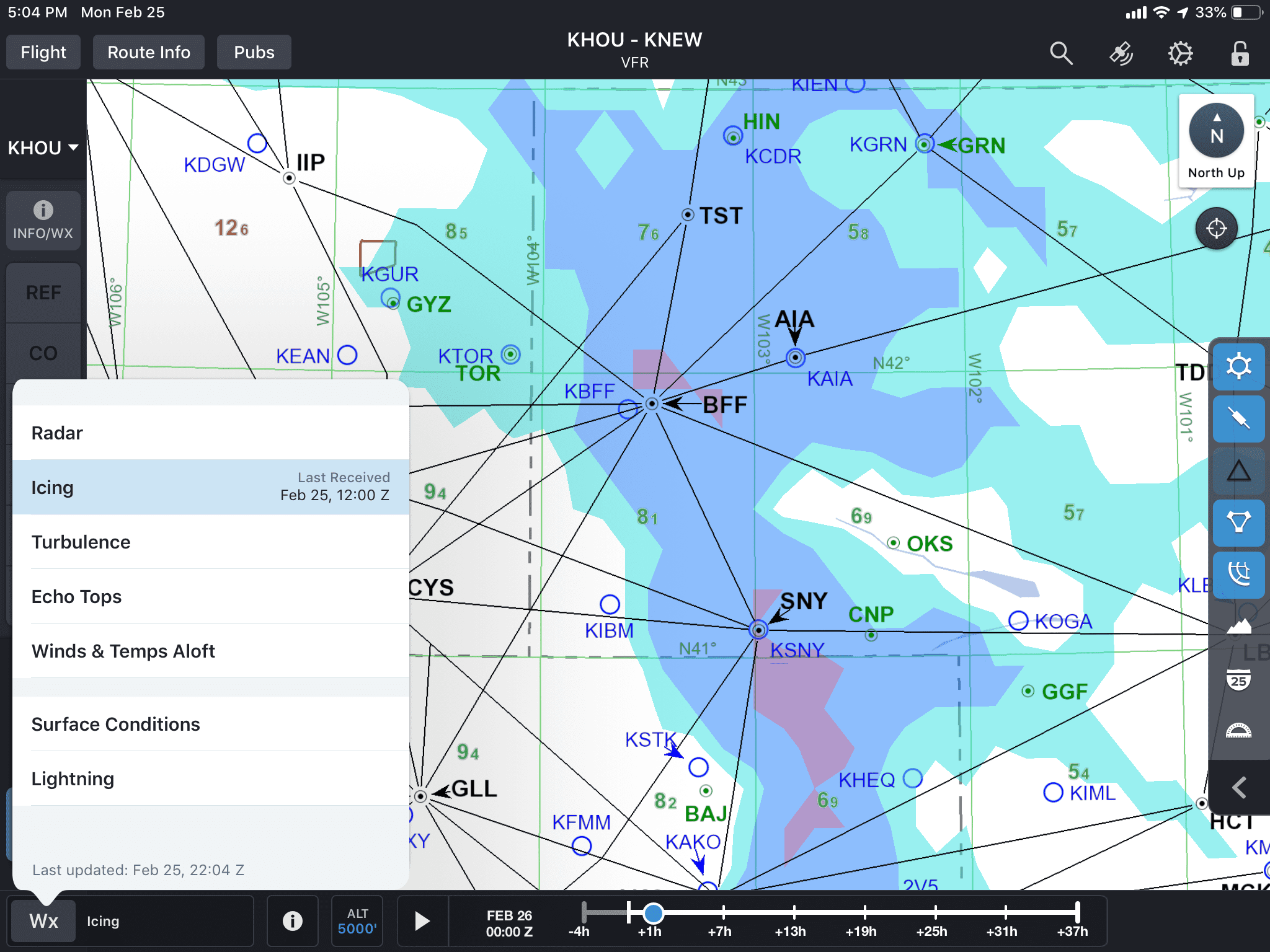 We’ve talked to several airline pilots who have been using the new app for a few weeks now, and they really like the direction the app is moving. The collaboration between ForeFlight and Jeppesen is a win-win for pilots of all levels, allowing iPad pilots to experience the best of both worlds, whether they’re flying a Cessna or a Boeing.

How do different sizes of iPad fit in an airplane?