Blog - Latest News
You are here: Home1 / Apps2 / 5 things to look for in the newest version of ForeFlight 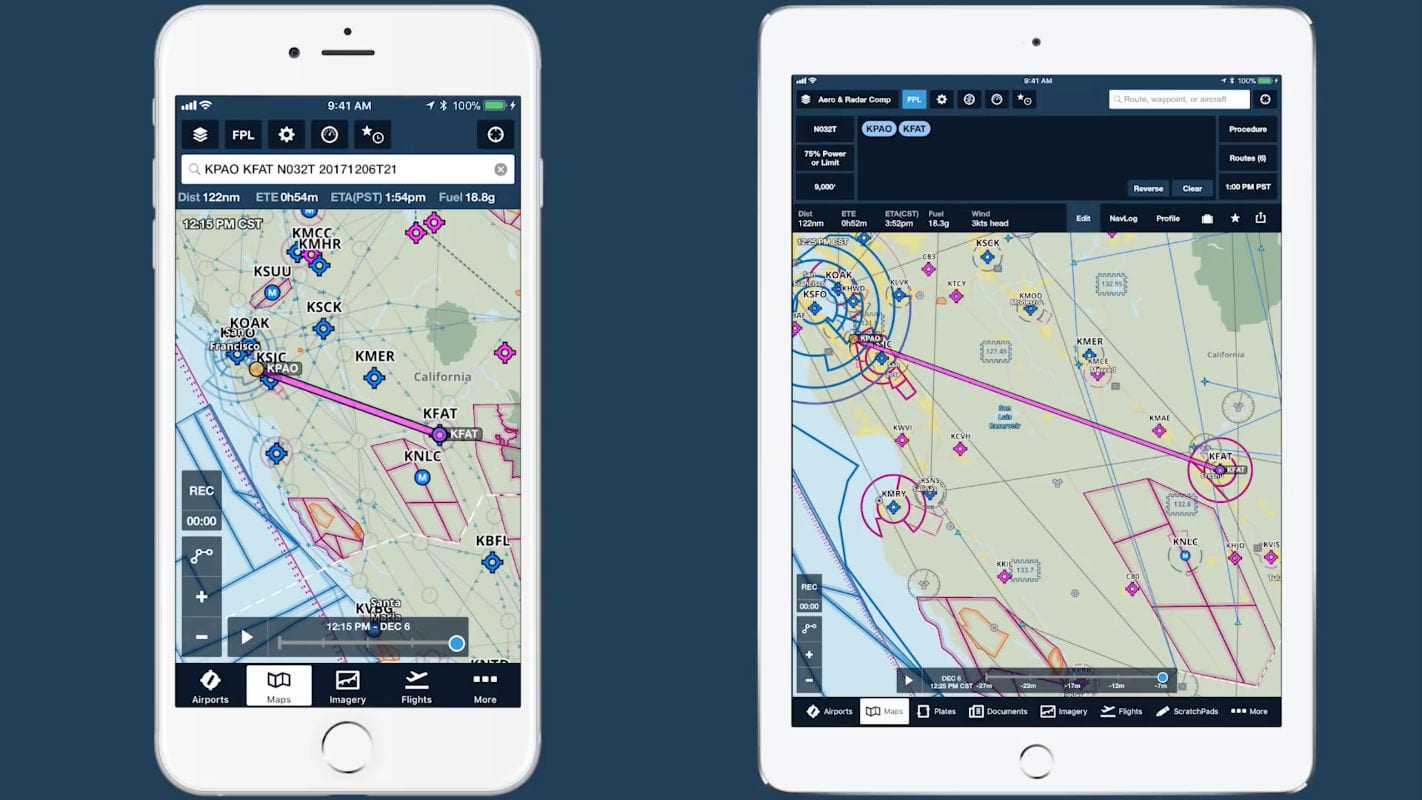 When ForeFlight first launched over 10 years ago, the app was designed for one device: the iPhone, with its 3.5″ screen. Now the app can be found on a huge variety of Apple devices, from 4″ iPhones to 13″ iPads. Making one app look good on all those devices is a serious challenge, but it’s one that ForeFlight has tackled in a big way with version 9.5.

The user interface hasn’t been radically changed, but there are dozens of small tweaks, especially noticeable on the iPhone. Whereas once the iPhone was mostly used by pilots for basic functions like checking weather, the latest generation of phones (especially the top-of-the-line iPhone X) are now being used as primary Electronic Flight Bags. The latest version offers essentially the same experience no matter what device you use, making ForeFlight both easier to use and more powerful on the iPhone.

Redesigned interface on iPhone and iPad

This is the big news and the changes are evident all over the app. The overall goal is a responsive layout, so one version of the app adapts to varying screen sizes. No more iPhone vs. iPad features.

The iPhone now uses a tab bar for navigation, instead of the old option for a slider bar menu or full screen menu. This is just like the iPad tab bar, although there are obviously fewer buttons on the smaller iPhone screen. It’s a lot easier to manage – switching back and forth between frequently used features requires about half the number of screen taps. 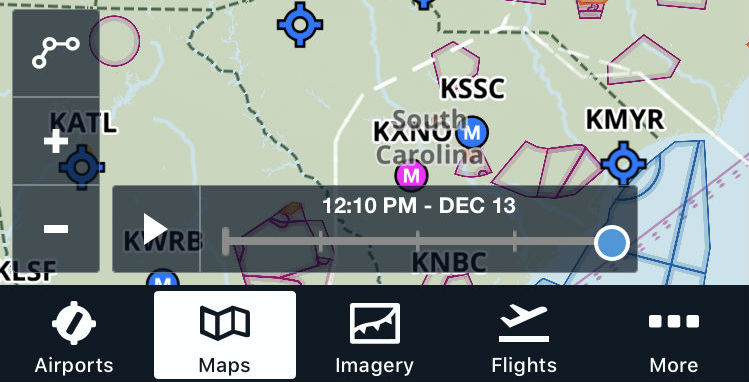 A redesigned Airports tab on iPhone is a lot more intuitive than the previous version, which required searching for an airport or tapping on an airport on the Maps page. Just like the iPad, you simply tap Airports in the bottom left and then choose the major screens: Info, METAR, Forecast, Winds, and FBOs. You can still search, but you can also review favorites, recents, and nearby airports with one tap. 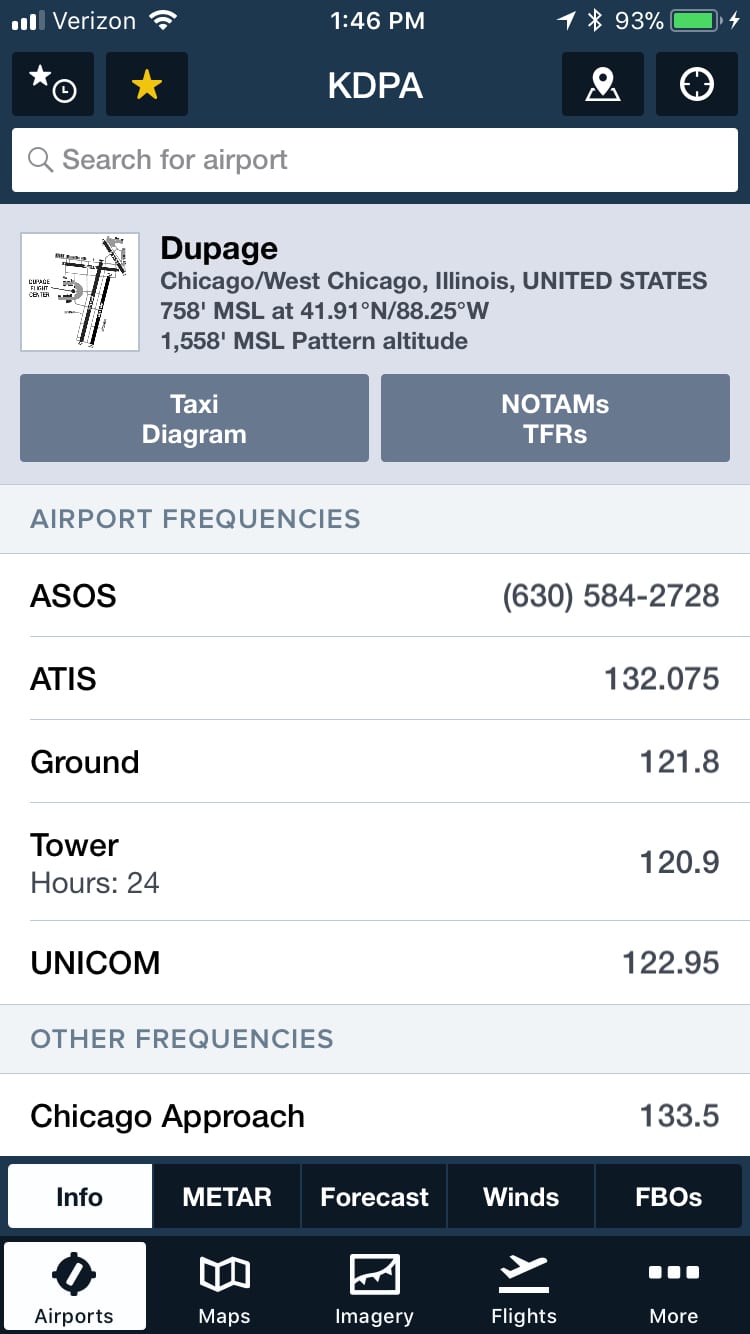 The top navigation bar on the Maps page is smaller, so you can see more of the map, and it also matches the iPad layout. Buttons for map layers, flight plan, settings, data blocks, and favorites/recents are all in a row now. The search box on iPhone also matches the iPad now, and shows the essential trip info below it. This makes the quick flight planning process on the Maps page essentially identical to the iPad. 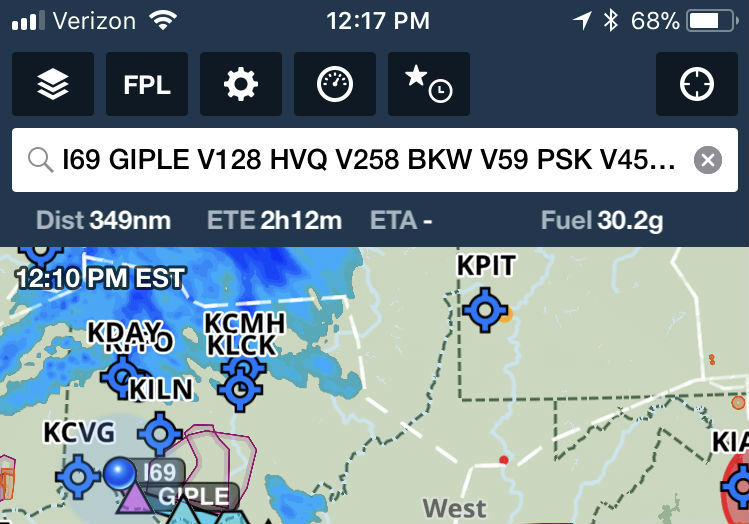 Similarly, full FPL functionality is now available on iPhone, including the Route Advisor and Pack options. Instead of finding a route through Flights or Routes, like before, simply type in your departure and destination airports in the Maps search box, then tap FPL. 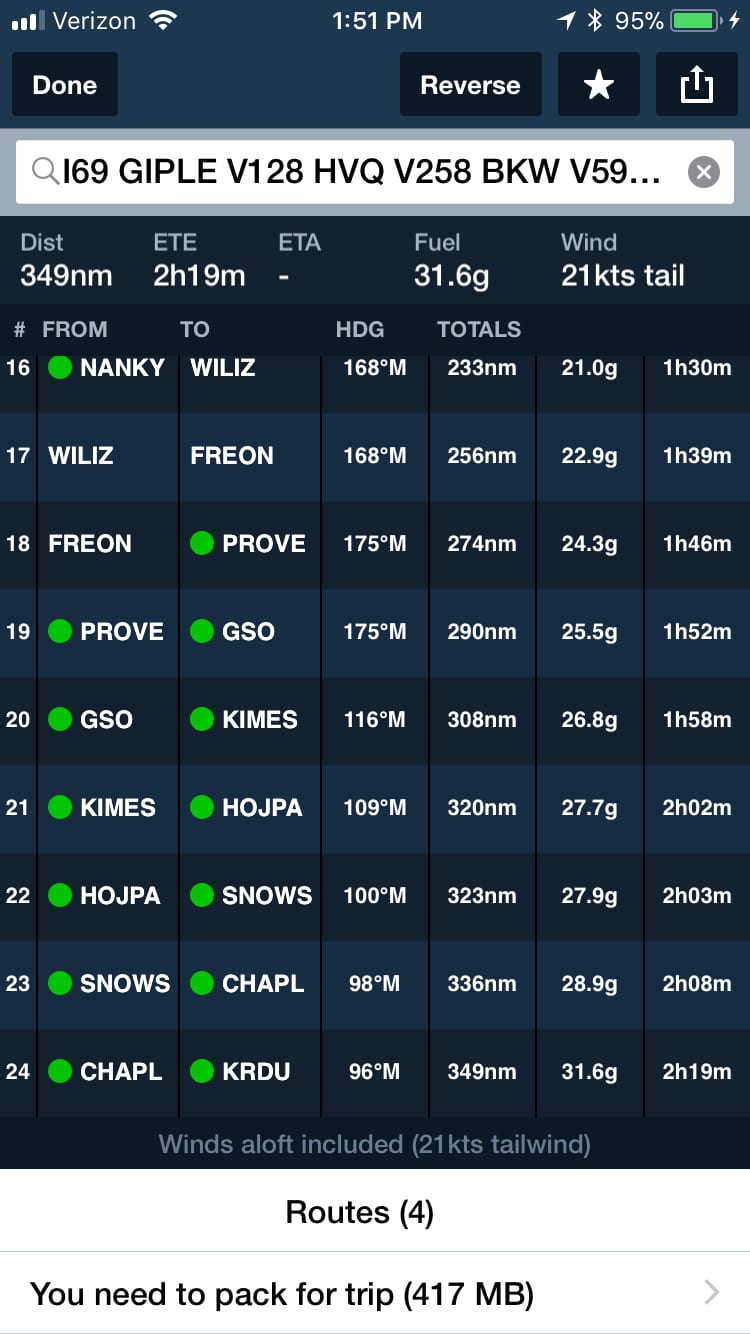 ForeFlight 9.5 also supports landscape view on iPhone for the Maps page, including slide-over windows for airport information. This is really nice for those east-west flights, especially on larger phones like the 7 Plus/8 Plus or iPhone X (which is fully supported in this version). 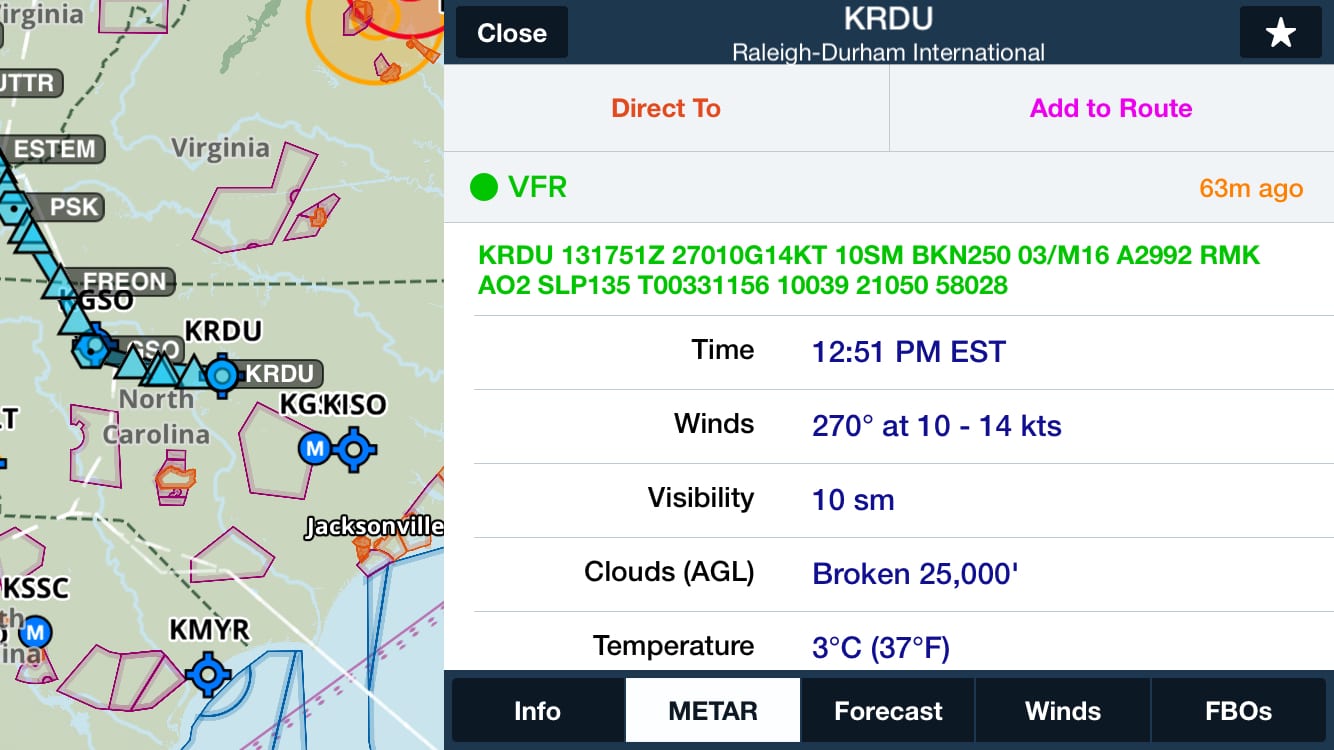 Favorites and recents are now one button. On the Airports tab, for example, tap the combined star/clock symbol at the top left and you’ll see a screen with options for Favorites, Recents, and Browse. It makes a lot more sense than scattered buttons. 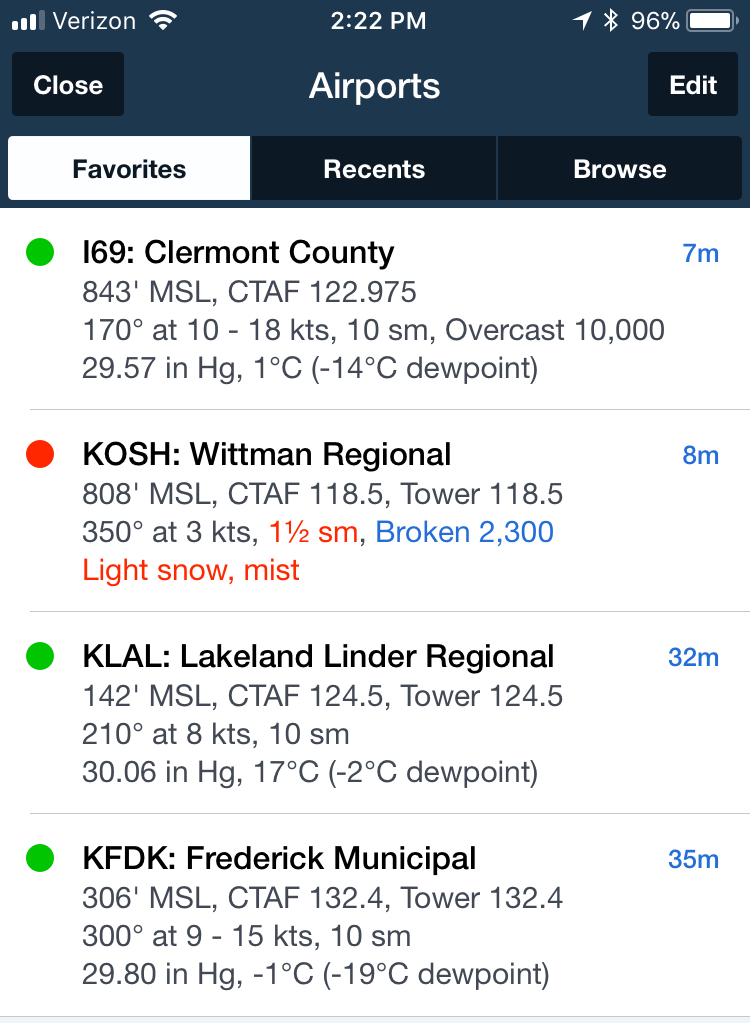 The More tab has been reorganized, with fewer distracting colors and a more logical order. It is easier to get to Checklist or Weight & Balance from any screen on iPhone, without searching around the page. 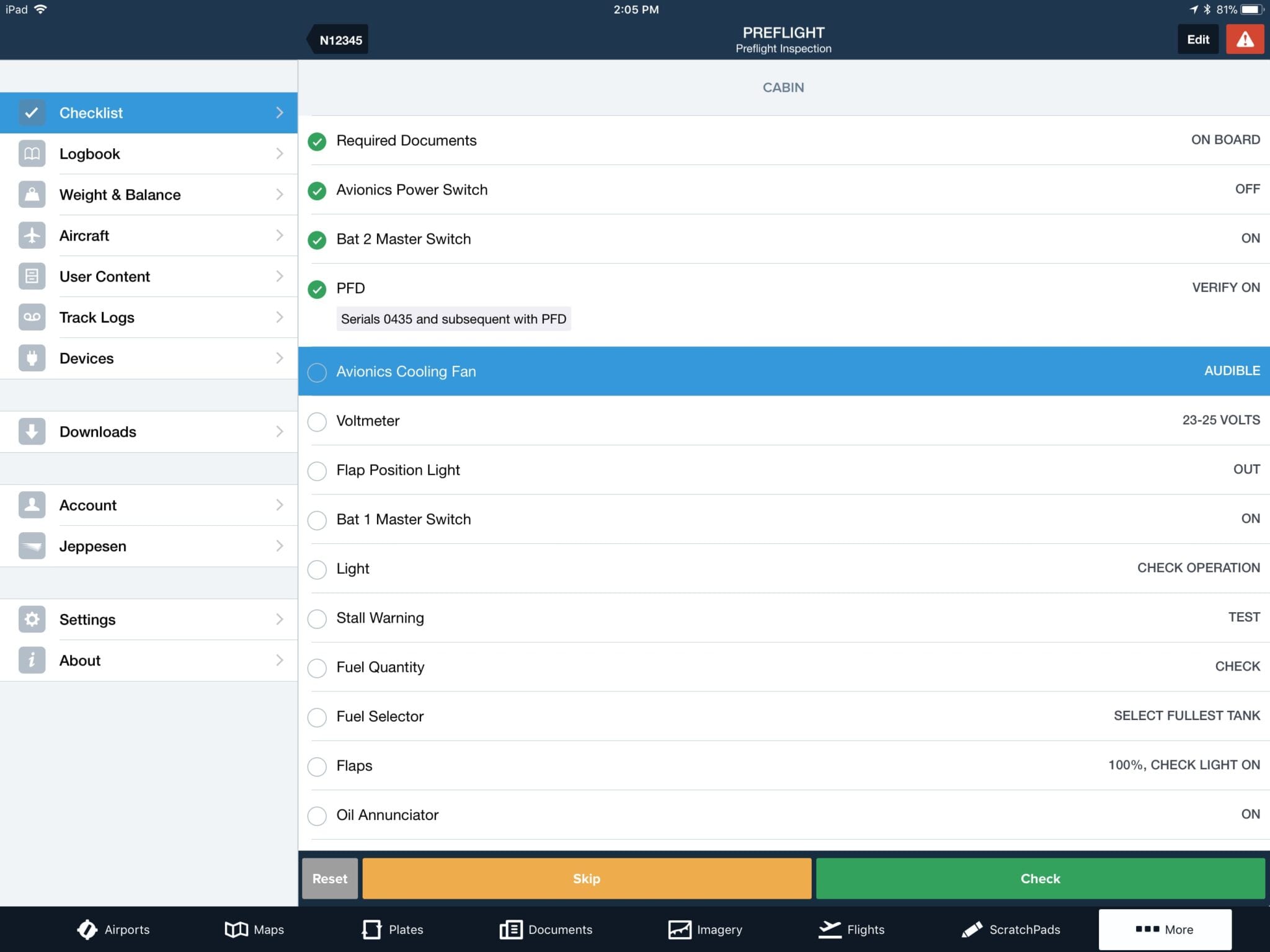 The responsive layout is noticeable on the larger iPad Pro 10.5″ and iPad Pro 12.9″ models. You’ll see a wider FPL window, and a shorter tab bar at the bottom so there is more screen dedicated to the map. 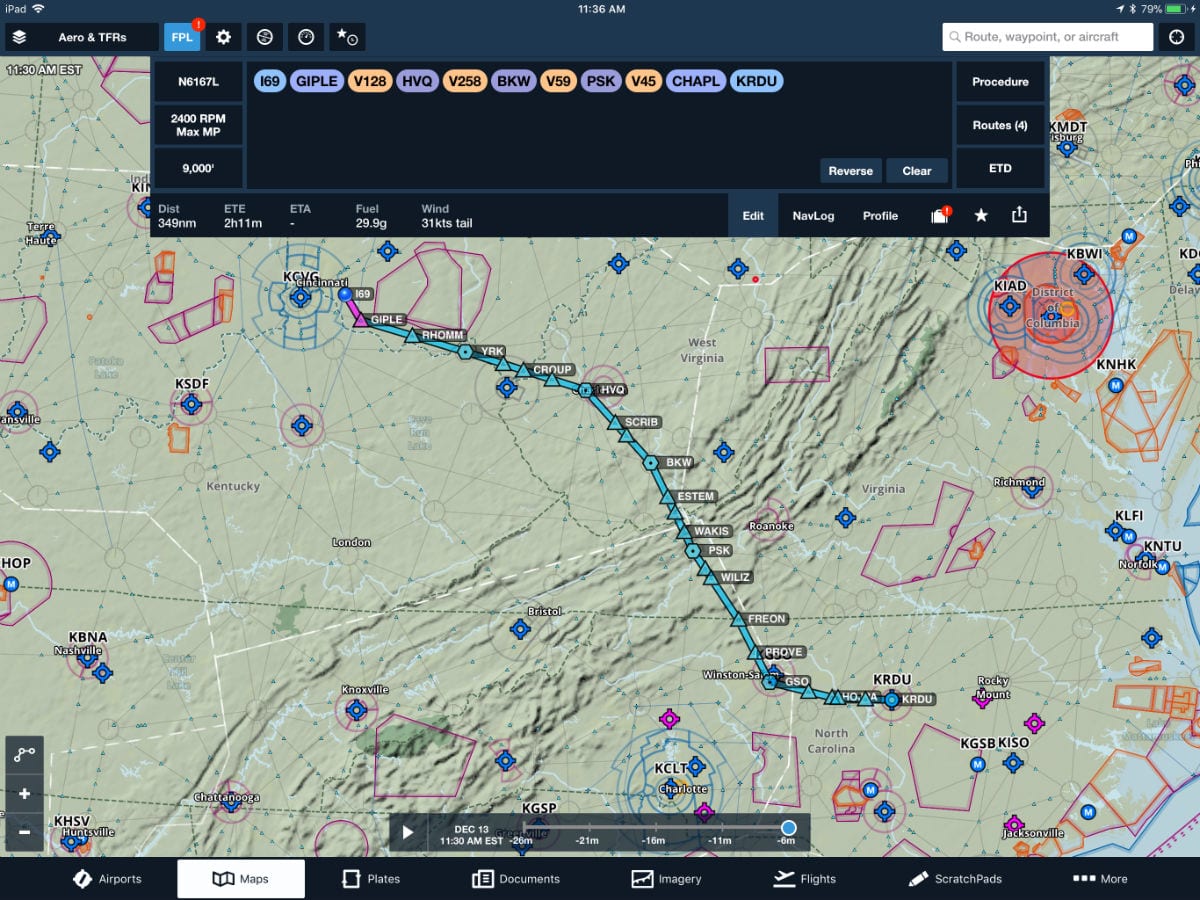 Here’s a minor update, but a really useful one. When flying a multi-leg flight, especially if you’re on a Victor airway, it’s often important to know about the length of a leg or the MEA. It’s also common to get cleared to “fly heading 170, intercept V128.” Answering such questions used to involved using the measure tool (with two fingers) or tapping the FPL box to activate a leg. Now it’s much more intuitive – just tap on the leg and you’ll see a pop-up with key information, as well as the option to fly the leg, go direct to the second fix that defines the leg, or delete that fix. 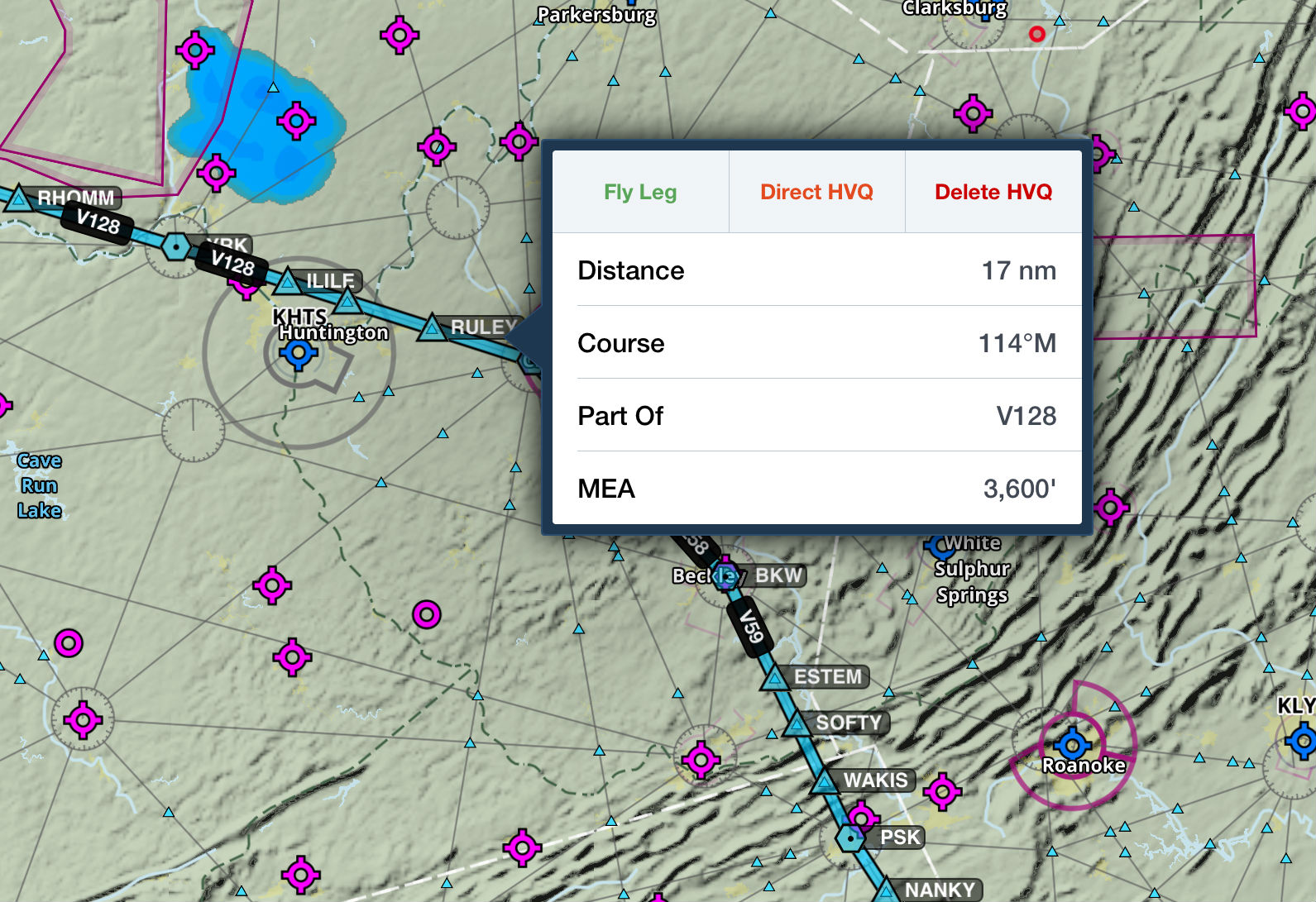 FBO information, always important to consider at bigger airports, is now integrated into Flights tab. Tap on the line under Destination Services to select the FBO you prefer. Then, once it’s selected, you can call, email, or navigate to (in Apple Maps) with one tap. Tap on the i button to learn more, including the current fuel price – even contract fuel pricing if you’ve connected a JetFuelX account to ForeFlight. Helpfully, ForeFlight will remember your choice the next time you go to that airport. 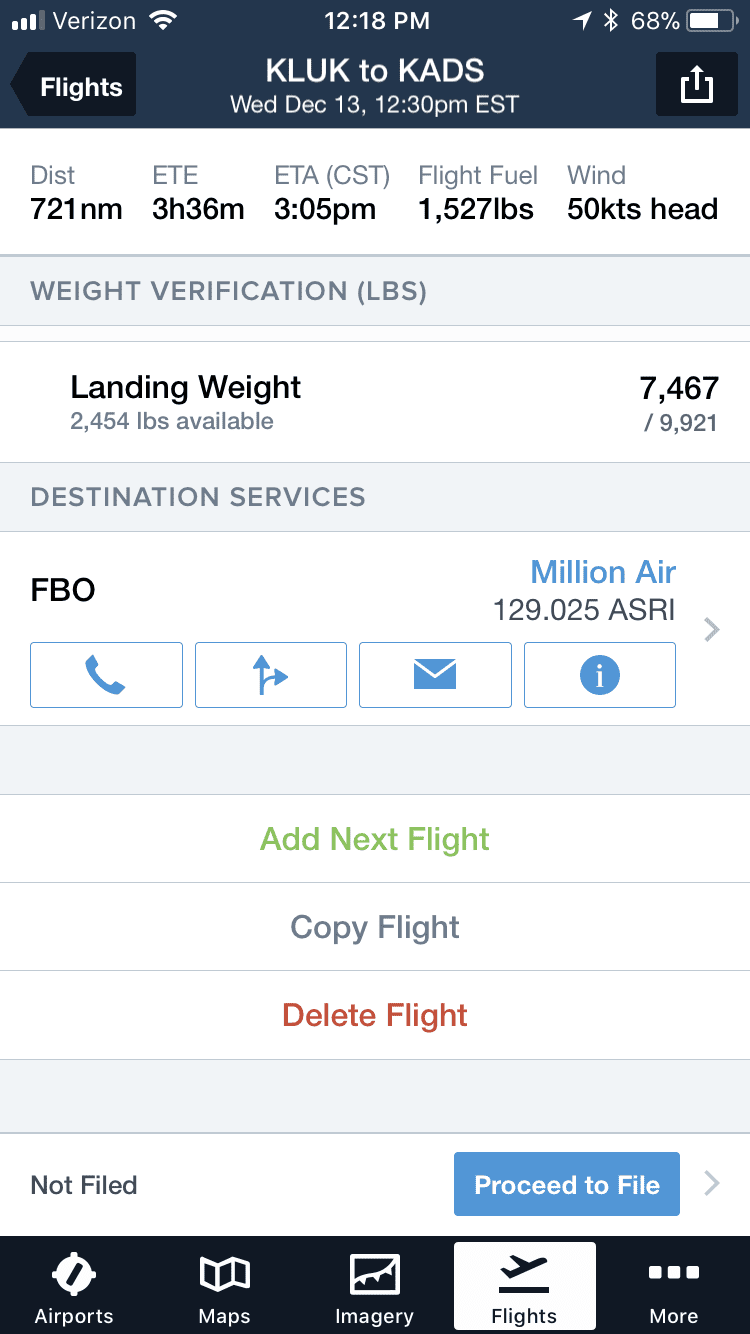 ForeFlight’s graphical preflight briefings have become more and more popular, as they collect and organize an otherwise confusing array of information. Now these briefings are automatically synced between all devices on your ForeFlight account. That means you can brief on your laptop, then review the details on your iPad before takeoff. No need to retrieve a new briefing.

You’ll also notice some new details if you haven’t used Flights lately. RAIM predictions are now noted on the Navlog:

The graphical briefing also includes the new cloud coverage maps. While not 100% accurate, they do give a big picture view of cloud tops and coverage: 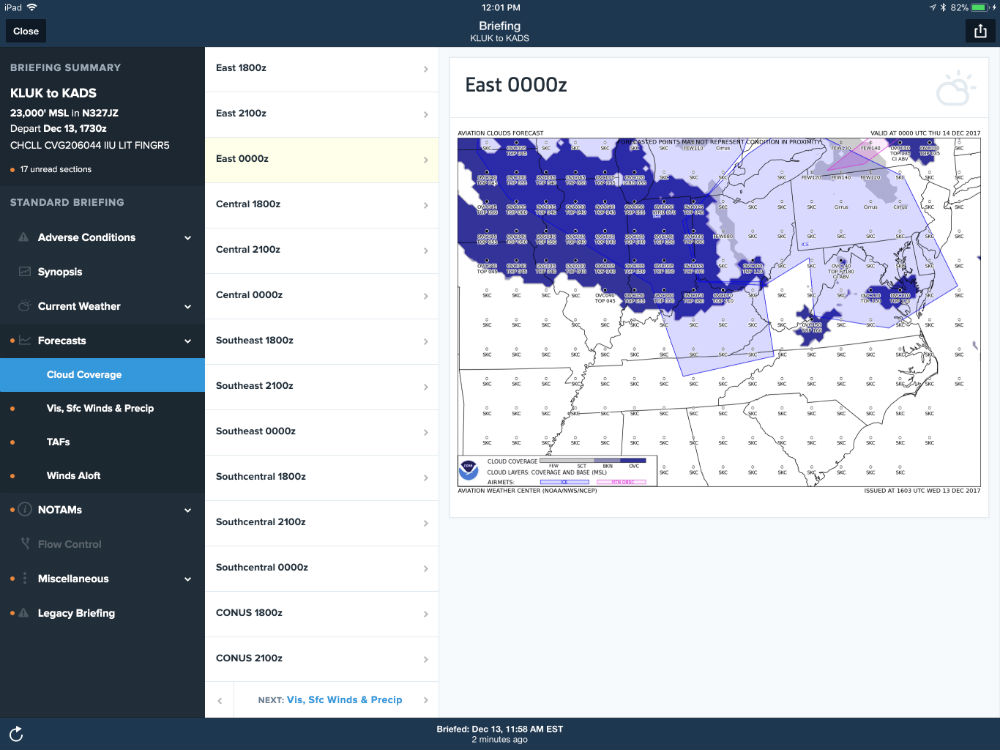 Finally, you can tap on the clock symbol next to a METAR to see the last few observations (instead of only the most recent one).

Finally, ForeFlight has launched some big upgrades to the Military Flight Bag option in the app. While most pilots probably don’t use this feature, a growing number of pilots from the Air Force, Coast Guard and other branches are using ForeFlight as a critical part of their daily operations. The app now offers TPCs, JOG, ONCs, and Range charts for download, and the process is surprisingly easy. This makes ForeFlight really the only full-featured charting option for military pilots on iPad. 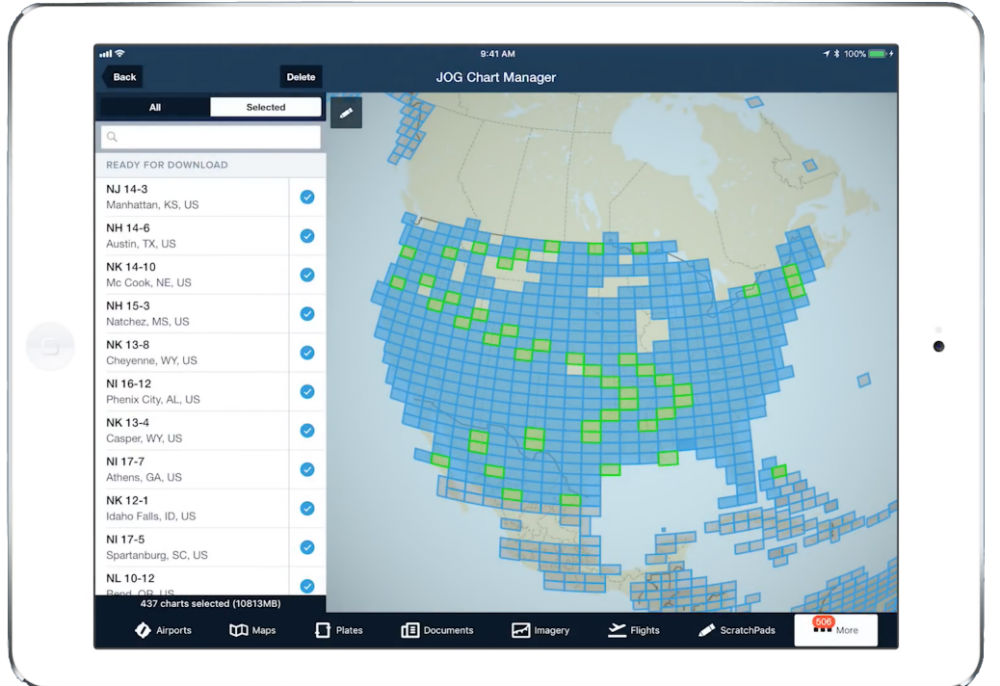 ForeFlight has a helpful video that explains some of the major design changes:

iOS 11 tips and tricks for pilots