Blog - Latest News
You are here: Home1 / Beginner Tips2 / Do I really need to use Airplane Mode on my iPad or iPhone?

One of the most common questions we hear as pilots is, “Do I really need to put my phone in Airplane Mode?” The airlines have been saying yes for years, but many travelers think this advice is outdated and it’s safe to ignore. Is that true in a small airplane? And what is Airplane Mode anyway? Here’s our advice. 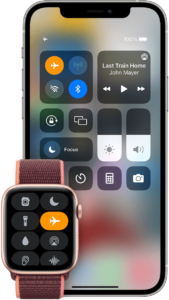 Does it really matter?

Let’s begin with the actual rules. First there’s FAR 91.21, which covers all portable electronic devices—not just cell phones—being used on any aircraft operating under an air carrier certificate (think airlines) or under IFR. No portable electronic devices can be used in these cases unless “the operator of the aircraft has determined it will not cause interference with the navigation or communication system.” This is a fairly simple determination for a GA pilot to make in the airplane, and the FAA has been clear that sophisticated testing equipment is not required to satisfy this FAR.

There’s also AC 91.21-1D, which expands on FAR 91.21. This AC offers suggestions for evaluating portable electronic devices and clarifies that cell phones and LTE-enabled iPads, while prohibited from use in flight by FCC regulations, are allowed to be used in aircraft while on the ground for picking up a clearance or filing a flight plan.

Neither of these FAA documents explicitly ban the use of cell phones or LTE-enabled iPads, but the FCC does in 22.925: “When any aircraft leaves the ground, all cellular telephones on board that aircraft must be turned off.” More practically, it’s clear the main concern from regulators is electromagnetic interference (EMI), and in our experience we’ve almost never seen any interference from an operating cell phone. However, it’s worth pointing out that the chance of interference isn’t zero—hold your iPhone up to the compass and see what happens.

However, even if there’s no EMI there are good reasons why you should consider using Airplane Mode.

First, consider why the FCC bans the use of cellular devices—it’s really about the cell towers on the ground, not the airplane instruments. Airborne cellular transmitters have line of sight to many more towers than a typical phone on the ground, which means your iPhone at 2500 feet can easily swamp channels on multiple towers. This isn’t good for the performance of the rest of the cell network and for everyone on the ground. Some people even think carriers temporarily blacklist phones that connect to lots of towers. If you’ve ever tried to get your emails while your airline flight was on approach but found performance to be really bad, that might be what’s going on.

Secondly, Airplane Mode is much more efficient for your phone or iPad battery. This is mostly because your devices won’t be using extra power to search for cell towers or trying to coordinate connections with towers that are barely reachable. Leaving LTE on for the entire flight can easily consume half your battery life on a two-hour flight.

Lastly, Airplane Mode should make your apps perform better. Instead of trying to make network requests that will most likely time out when you barely have any bandwidth, network requests won’t happen at all, and your apps should just fall back to being offline. Anecdotally, we’ve also seen more reliable performance with external devices like ADS-B receivers when LTE is turned off.

Does that mean you should never use your cell phone in flight? No. In a worst case scenario, like a total communications failure in flight, we wouldn’t hesitate to try calling ATC on the phone. It has happened, and it has worked. You might have to beg forgiveness with the FCC, but that’s a small price to pay.

One last note: remember that Airplane Mode does NOT disable the internal GPS (if your iPad has one). Many years ago that was the case, but no longer. You can turn Airplane Mode on and still navigate in ForeFlight.