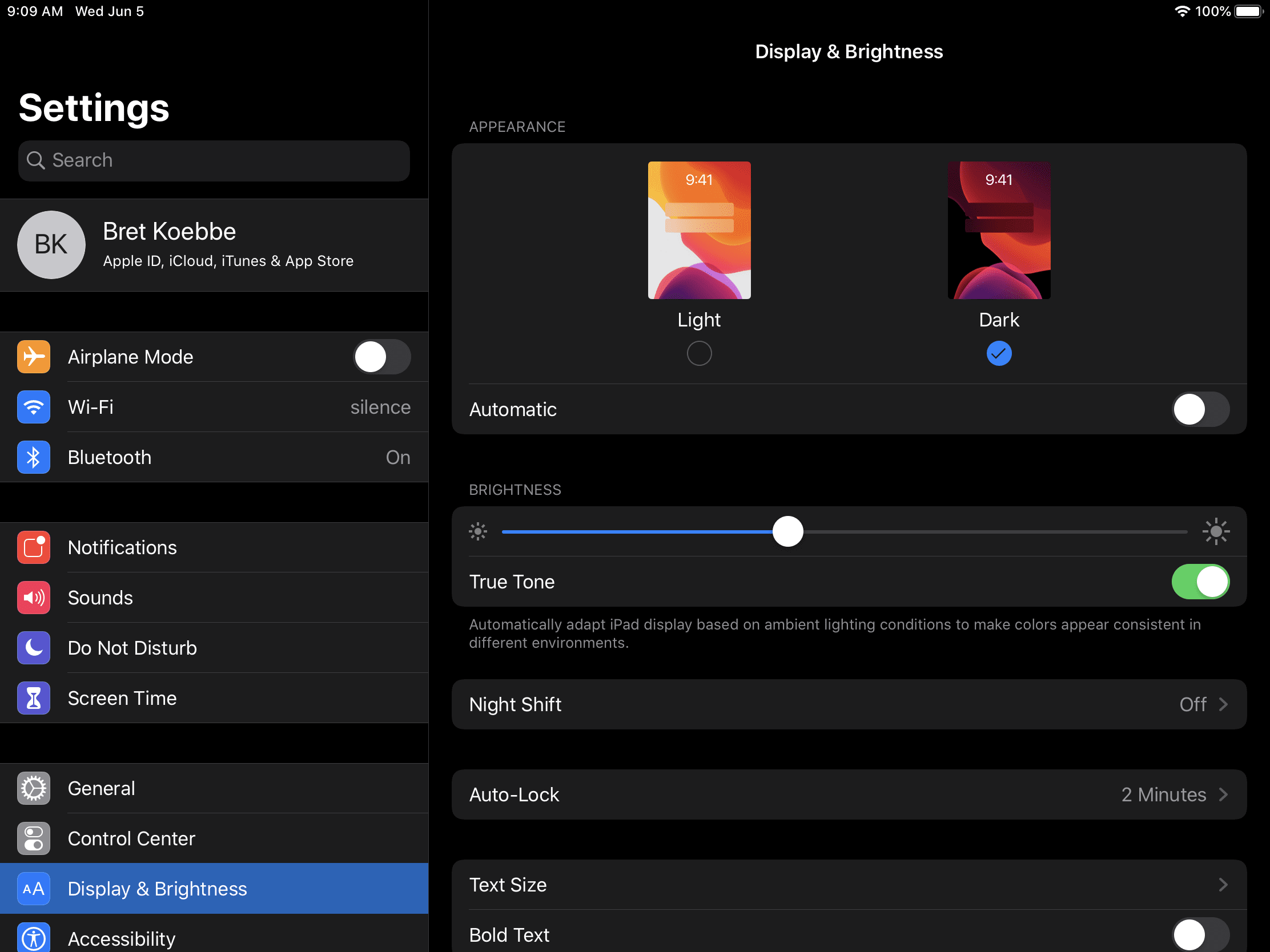 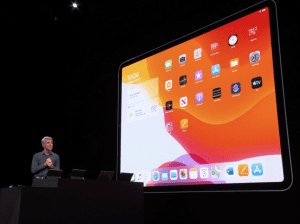 Apple kicked off their annual developer’s conference this week with an information-packed keynote, focused on sharing the new software updates coming out for their various platforms later this year. As usual, the majority of the focus was on the next big update for mobile devices, called iOS 13.

Apple also debuted a new operating system with exclusive features for the iPad, called iPadOS. While these won’t be available for your devices until September, here’s a sneak peak at the features pilots can look forward to when these updates are made public.

As with any major iOS release from Apple, there are hundreds of updates and feature changes, ranging from an all-new Reminders app and a Dark Mode, to small Control Center tweaks that make everyday interactions more powerful.

We’ve been using a beta of iOS 13 for a day now alongside our app development team, and this beta feels surprisingly polished. What’s most noticeable is that just about every control and interface has been refined with additional usability, from the sharing feature to daily interactions with the Mail and Messages app. Here are our first impressions and the features we think pilots will find most useful.

iOS 13 is designed to be faster and more efficient all-around. FaceID unlock time is 30% faster and apps will launch twice as fast on iOS 13. Apps are packaged more efficiently in the App Store (up to 50%) and updates are 60% smaller.

Why it matters: Apple has shifted its focus in recent years to software refinements that allow you to get more life out of your older iOS devices. These include both performance and battery life improvements that will extend the life and usefulness of the iPad or iPhone that may be a few years old now.

There is a new Dark theme appearance option available, that intelligently inverts the colors of the native Apple iOS apps and compatible third-party apps.

Why it matters: Aviation apps like ForeFlight have offered dark themes for awhile now, while other apps like Garmin Pilot rely on a dark theme by default. Many prefer this view since it’s easier on the eyes in low light conditions, and will allow you to view your non aviation apps with a similar style in the cockpit. It should improve battery life as well due to the lower level of brightness required by the display.

Apple previously prevented you from downloading apps or app updates over cellular data that were over 200MB size – this restriction has been removed in iOS 13.

Why it matters: This provides additional flexibility for the times you’re away from WiFi and need to install a critical app update using your Verizon or AT&T data connection. Or maybe just install a new iPad game right before your airline flight lifts off (we’re not here to judge).

You can select a different WiFi network or Bluetooth device right from the Control Center by long-pressing on the WiFi and Bluetooth buttons.

Why it matters: A necessary part of iPad preflight is connecting to wireless accessories, and now you can select the right one without leaving your primary EFB app. 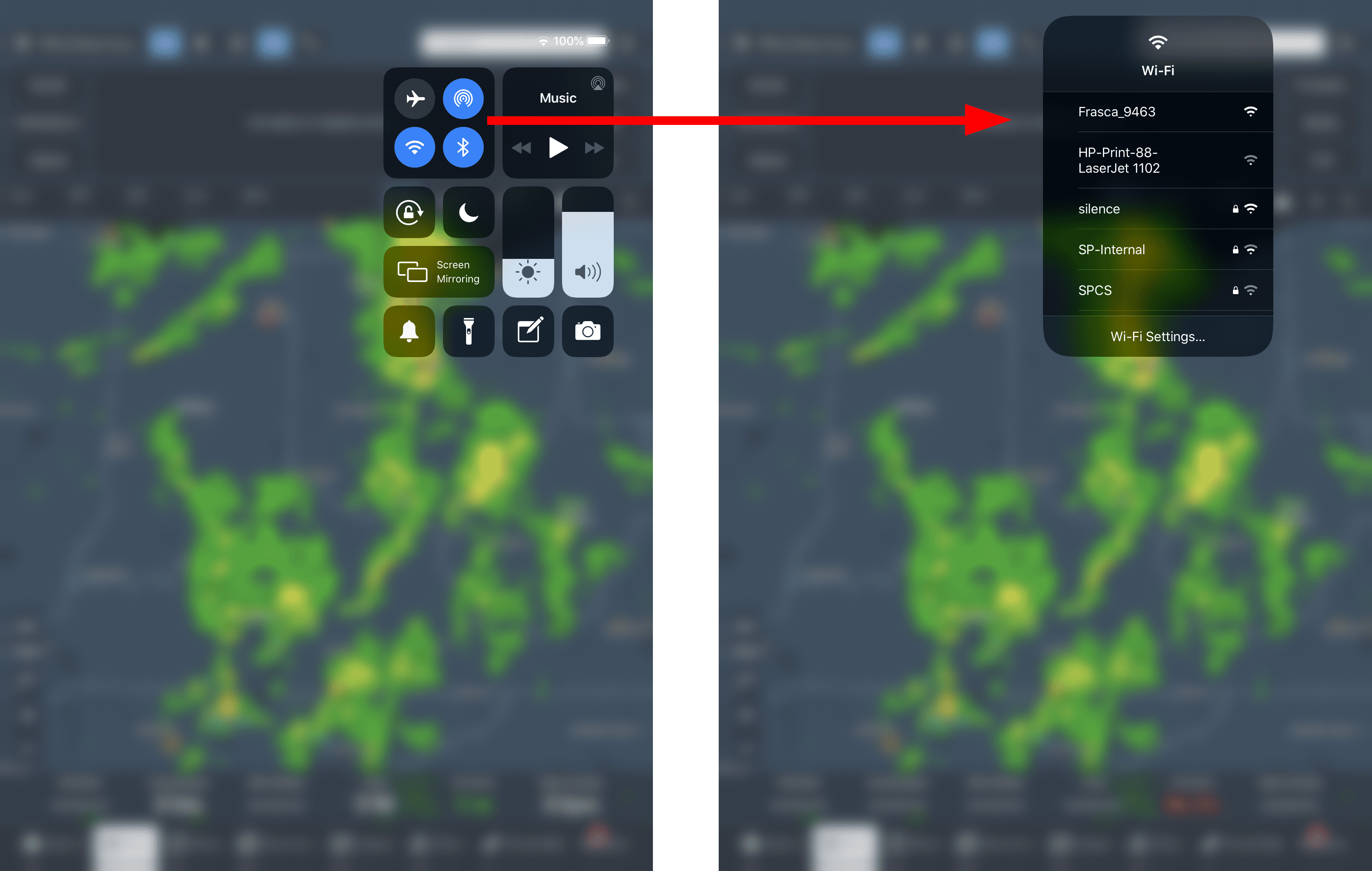 Apple finally added the swipe-to-type entry method when using the on-screen keyboard, allowing you to drag your finger around to various letters when entering text.

Why it matters: This method can be easier to enter short lines of text like airport IDs or routing in your aviation app when flying through turbulence since you can leave your finger pressed against the screen the entire time for greater precision and control. 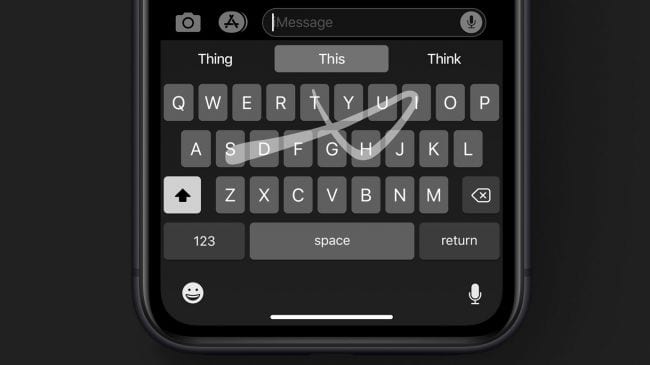 When opening an app that requests to use your location for contextual data (like a weather or map application), you now have the option to allow the app to use your location only once. It will then prompt you the next time you launch the app with the same set of options.

Why it matters: Apps using your location while running in the background can shorten battery life for functions you may not need, in addition to privacy concerns. This is helpful when using your device outside of aviation and opening infrequently used apps. 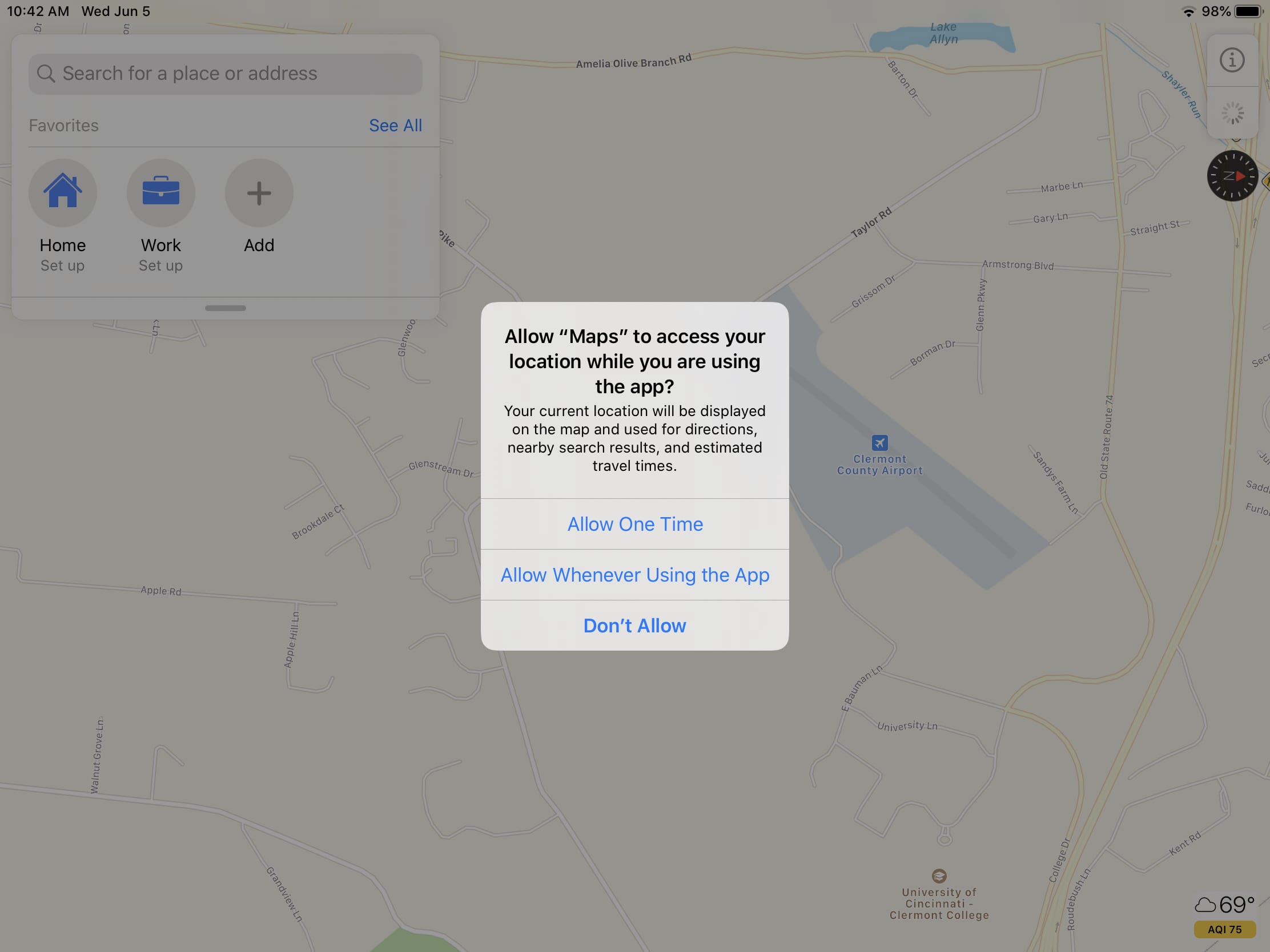 While the core functionality of the iPad has its roots in the iPhone’s operating system, Apple recognized that there are enough differences now that it needs its own OS. During the WWDC Keynote presentation, Apple announced that the iPad will now run a modified version called iPadOS (technically referred to as iPadOS 13).

This means that the iPad gets all the iOS 13 features debuted Monday, plus the following new features:

Apple decreased the size and spacing between icons, allowing you to display 30 apps on your home screen now, in addition to what’s shown in the dock (it was previously 20). You can also show the Today View with app widgets on the home screen when in landscape orientation.

Why it matters: We’ll likely see app developers take advantage of widgets more now since they can remain constantly in view. It’d be great to show the latest METAR/TAF here, or details about an upcoming flight from your EFB app.

The Files app can transfer files to or from a connected USB drive or SD card when using a USB reader in the new iPadOS.

Why it matters: This could allow you to update GPS database cards right from your iPad, without the need for third-party specialty systems or dragging your laptop out to the airplane each month.

Why it matters: Apple is making great strides in furthering the multitasking features to further enable its use as a laptop replacement. Running two apps side-by-side allows you to get more out of your current aviation apps when used on the ground. In this example, Sporty’s Pilot Training app is showing an Instrument quiz on one side and the Instrument Flying Handbook from its FAA Library in the other. 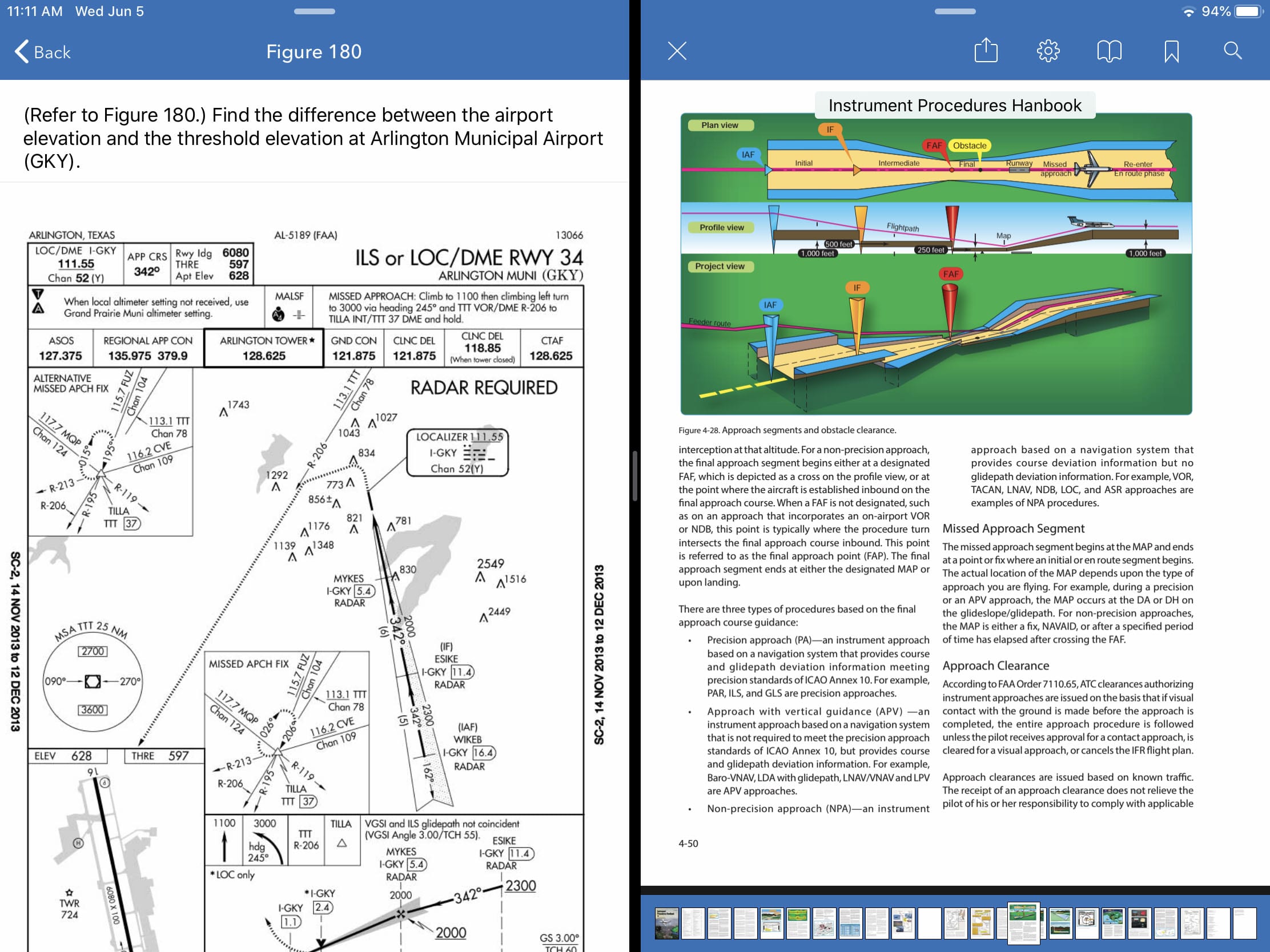 iPadOS includes new shortcuts you can use to interact with text on the screen. Simply drag your finger across a line of text to select it, double tap a word to select just it, triple tap to select a sentence, and use four taps to select a paragraph. Copying and pasting is simplified too – copy the text with a three-finger pinch, and then un-pinch to paste it in a new location.

Why it matters: Pilots have always loved the multitasking features in the airplane since they allow for quick manipulation with minimal heads-down time. These new text enhancements are a welcome update, especially when dealing with long routing or the manual entry of IFR procedures.

iOS 13 will debut mid-September for public download, although Apple is likely to open a Public Beta program next month if you want to try it out ahead of time. It is compatible with the following devices: