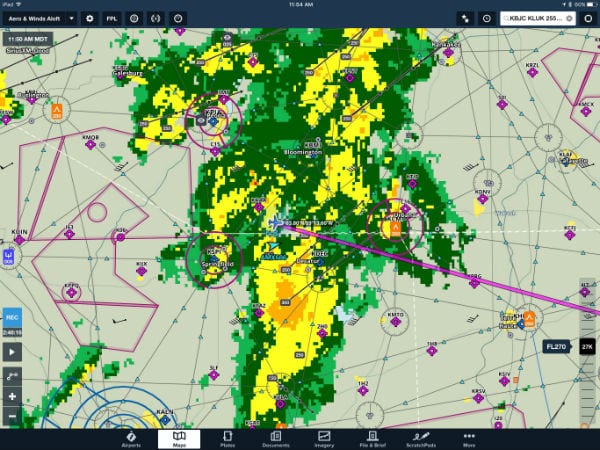 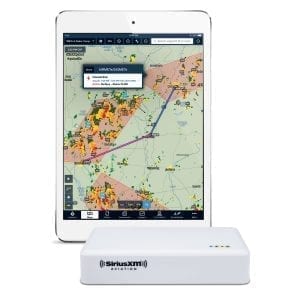 About a month ago, ForeFlight introduced support for the SiriusXM Aviation Receiver, also called the SXAR1. It’s the first widely-available product that delivers satellite weather to a popular electronic flight bag (EFB) app. We’ve had the chance to fly with it on numerous trips now, and overall we’ve found the SXAR1 to be reliable and useful. Here are some notes from a recent cross country flight in a Pilatus PC-12.

First, we intentionally ignored the instructions and played “dumb pilot,” simply placing the small white box on the dash and going flying. The SXAR1 was easy to pair with our iPad using the Settings app, and it automatically reconnected each time after that without any hassle. There is only one button on the box, so the learning curve is almost non-existent.

Right away, we noticed one of the nice features of SiriusXM Weather. Since it’s delivered via satellite, it can be received on the ground. So by the time we reached the end of the runway, we already had weather on ForeFlight. 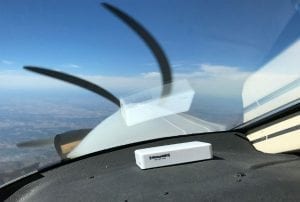 The SXAR1 worked just fine under a heated windshield.

Of note, the SXAR1 worked just fine under the dual pane, heated windshield in the Pilatus – without the use of an external antenna or a suction cup mount (both good options for improving reception if needed). Every airplane is different, but we were pleased with the satellite reception throughout the flight.

Our flight took us from Denver to Cincinnati, a 1000 nm trip, so having full resolution radar and PIREPs for the entire country immediately after takeoff was a nice feature. We had some weather to contend with, and being able to watch the radar image develop over time (including animating the radar) was helpful for watching the trend. Here’s the weather picture right after takeoff: 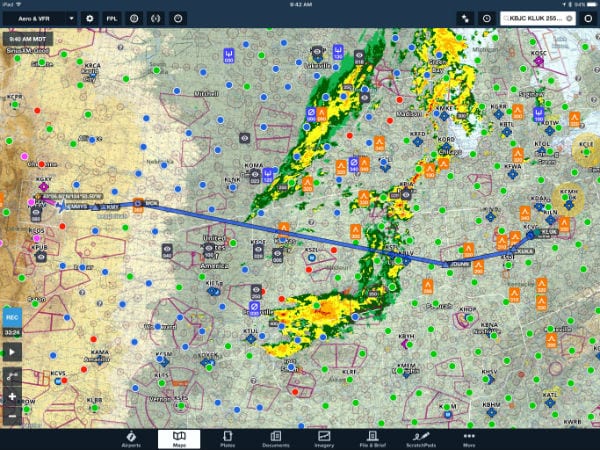 As always, the ruler tool in ForeFlight was a tremendous help, and when combined with the long-range/hi res radar imagery from SiriusXM, we had a complete plan well before we got to the area of weather. 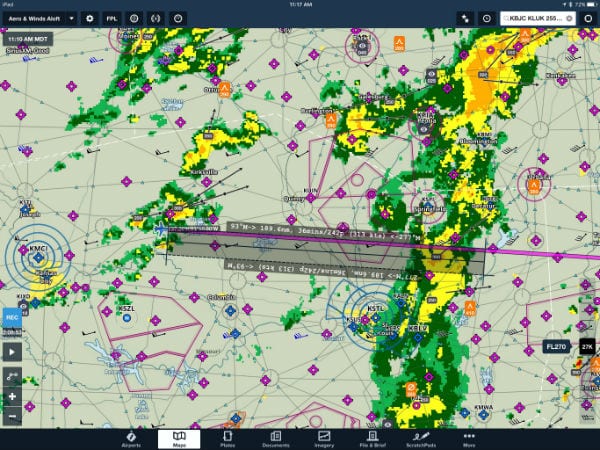 As we approached the largest section of weather, we faced the eternal debate with datalink weather: is that weather we can fly through or do we need to go around? The most important information is to know the type of air mass you’re flying in, specifically whether it’s convective or not. Because of our solid pre-flight weather briefing, we knew that this area was mostly just rain, without embedded thunderstorms.

That was helpful, but the SiriusXM radar image showed enough yellow and orange to make us think. Part of the issue here is that ForeFlight displays two radar layers: composite and lowest tilt (sometimes called base reflectivity). Both of these products have their pluses and minuses, but generally pilots watch composite because it presents a sort of worst case scenario. Here’s the composite radar image:

And here is the lowest tilt image, which shows a much less colorful line: 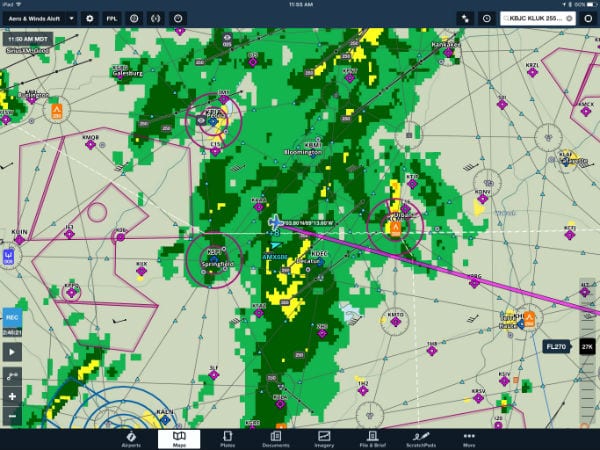 For comparison, here is the ground-based NEXRAD radar image from the same time: 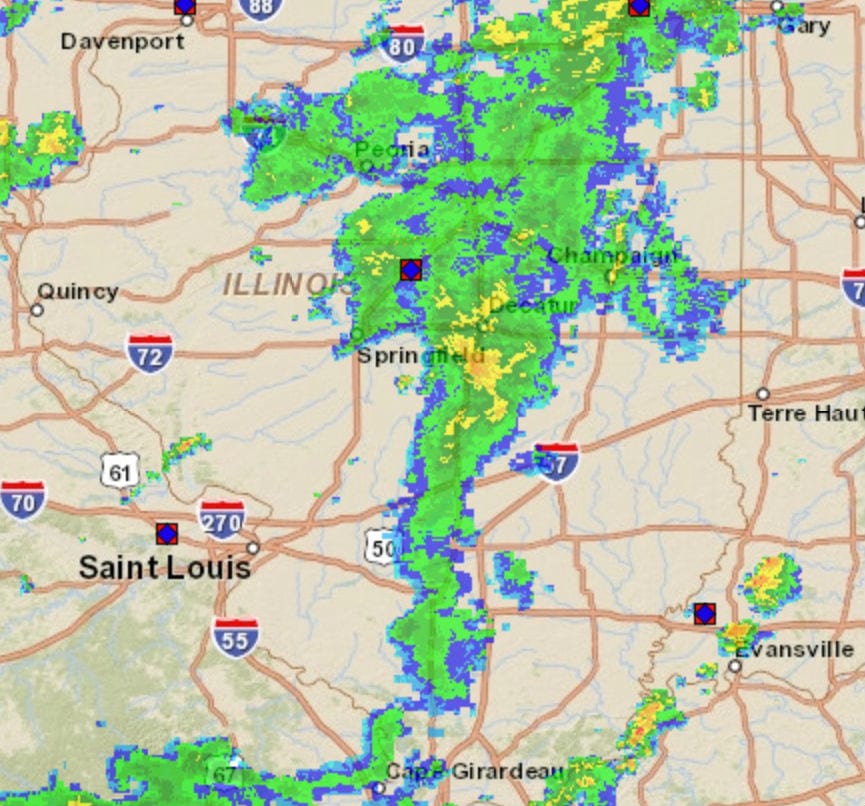 Another valuable tool in evaluating weather is the SiriusXM storm cell information, which shows tops and movement. Tapping on a storm presents a pop-up like this: 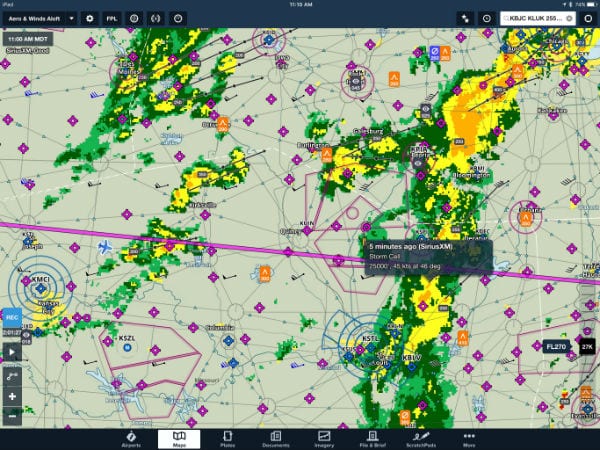 In the end, by combining the two radar images with the storm cell data (and of course the view out the window) we had a smooth flight through the rain. Overall, though, we found the composite radar overstated the intensity of the rain just slightly. That’s OK, since we’d rather take a conservative approach, but it’s worth understanding why. Notice the levels at which ForeFlight shows yellow returns – it’s different for internet radar, ADS-B radar and SiriusXM radar: 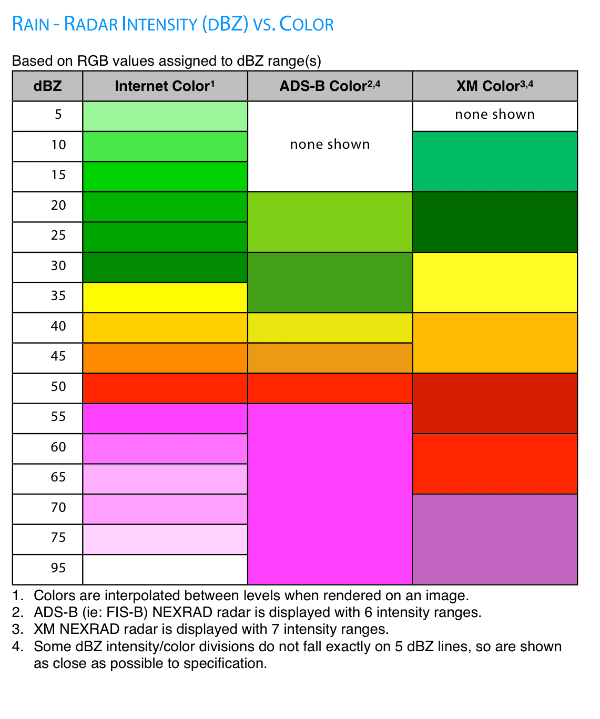 We tested one final option on this flight: using multiple devices connected to the same iPad. In fact, at one point we were using an SXAR1 (weather), a Stratus 2S (ADS-B traffic, pressure altitude and flight data recorder), and a panel-mounted Garmin FlightStream 210 (AHRS, GPS and flight plan transfer). It’s pretty much overkill, but it worked well and offered all the information we could want at our fingertips. 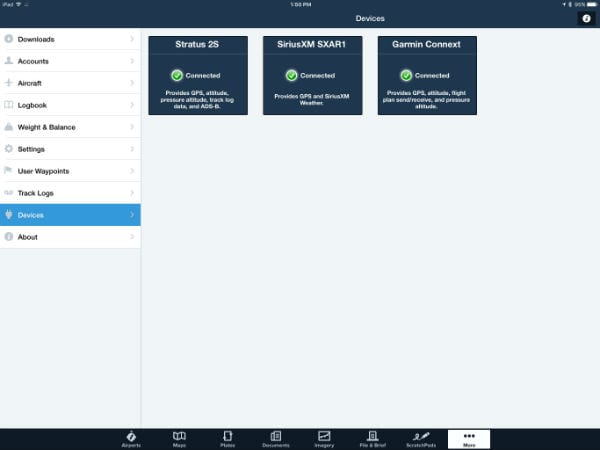 For more details on running a Stratus and ForeFlight at the same time, read this in depth article.

After a long day of flying, we can also affirm that the SXAR1’s battery life is excellent – the quoted 6 hours seems conservative, in fact.

Of course no product is perfect. We found ourselves wishing we could connect more than just one iPad to the SXAR1 at once, and we missed having XM Radio to listen to on a 4+ hour trip (neither one is an option at this time). We also wished there were a few additional weather products, like satellite imagery and echo tops. Hopefully all of these shortcomings will be addressed in time, although it’s worth pointing out that none of them are show stoppers for us.

The SXAR1 is a solid product that makes cross country flying a lot easier and safer. We can wholeheartedly recommend it. For more information on the SXAR1, visit Sporty’s website.