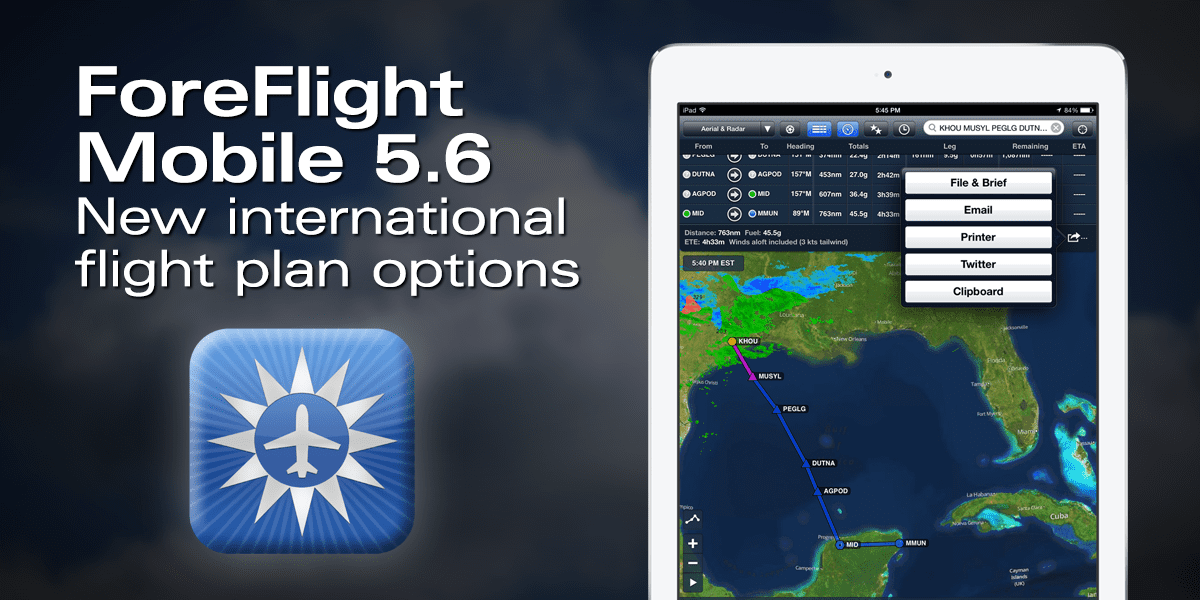 Lots of pilots use ForeFlight for pre-flight planning and in-flight charts, but a surprising number don’t know about all the flight plan filing features built into the app. With the latest update, version 5.6,  there are now more flight plan options than ever so it’s a good time to take another look. This update is short on flashy features, but look below the surface and you’ll see a number of interesting changes.

First up is an all-new deep integration with Lockheed Martin Flight Service. Whereas briefings and flight plans have traditionally gone through DUATS, ForeFlight is now moving to the new Lockheed Martin AFSS system (although DUATS is still supported). The biggest difference is that your flight plans can now be viewed by FSS specialists, so it’s easier to update your details or open a VFR flight plan. Previously, your DUATS flight plan usually went directly to ATC, so any changes meant you had to file another one–a frustrating experience if you’ve ever been through that.

There’s nothing extra to do in order to use these new features, and you do not have to set up an account. These briefings and flight plans are recorded and comply fully with FAR 91.103, so they are “legal” briefings (if such a thing really exists). You’ll also get email and iOS push notifications, which is a handy way to know the status of your briefing and flight plan. We wouldn’t be surprised to see more features come out of this ForeFlight-Lockheed Martin integration, so stay tuned.

Besides the new Flight Service features, ForeFlight 5.6 now supports ICAO flight plan filing for US flights. For better or worse, all flight plans will probably have to be filed this way at some point in the future, so it’s worth getting acquainted with this new format. The usual fields are there, of course, but there are additional ones for survival equipment, type of flight and other details. It’s a more comprehensive flight plan form, and it passes more information to Flight Service and Air Traffic Control. It’s also required for flights crossing foreign airspace, which is common on trips from the Northeast US to the Upper Midwest.

Pilots can now file flight plans from the US to Mexico and the Caribbean.

Late last year, we explored how version 5.5 brought a host of international charts to ForeFlight, making it easier to plan those flights south to Mexico or the Caribbean. Now the app includes full ICAO flight plan filing support for these international destinations too. Notably, IFR flight plans can be filed not just between the US and Canada, Mexico, and the Caribbean, but also within those countries. This makes ForeFlight a complete pre-flight and in-flight option for Canada, and a pretty good option for the other countries. The only major feature that is still missing is approach charts.

Two final features are aimed mostly at airline and military pilots. First, ForeFlight now offers complete worldwide coverage for DFLIP data. These charts are published by the US Department of Defense, so are not an option for civilian pilots, but this addition makes ForeFlight a powerful tool for worldwide military use. Secondly, there is an additional Ownship Position setting, which allows pilots to see their airplane on taxiway maps but not on en route charts. Part 121 and 135 operators are technically barred from using Ownship Position in flight, but this feature at least allows them to use the Runway Advisor feature in ForeFlight during ground operations.

ForeFlight 5.6 is a free update for current users; it does require iOS version 6 or later. Download the update in the App Store.