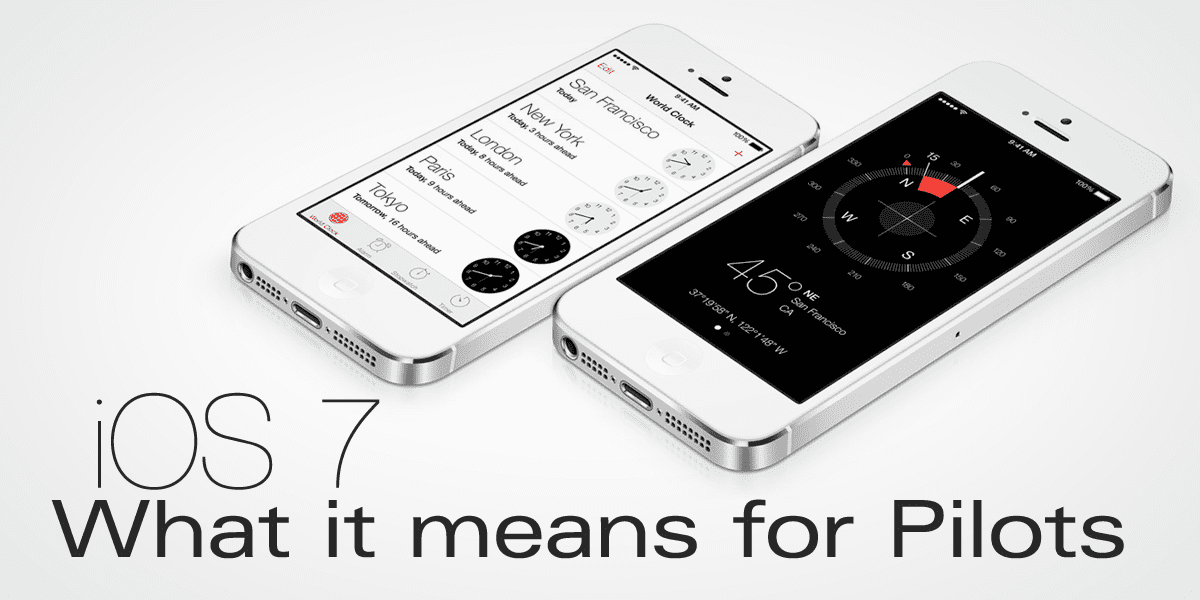 iOS 7 features an all-new Control Center that makes it faster to change settings.

Today, Apple unveiled its much-anticipated iOS 7, the latest version of the operating system that drives the iPhone and iPad. While the company continues to make great hardware, some users have complained that the basic software was getting tired and needed a major overhaul.

That’s exactly what CEO Tim Cook delivered today, calling iOS 7 “the biggest change to iOS since the introduction of iPhone.” The initial pictures seem to support that claim–Apple has removed many of the wood and leather design elements in favor of clean, flat icons and bright colors.

While much of this update is cosmetic, there are some big changes under the hood too. Some of these should be good enhancements for pilots. Let’s look at some highlights.

One of the biggest complaints about iOS has been how hard it is to adjust the settings–if you wanted to turn Airplane Mode on, for example, you had to close the app you were using, open the separate Settings app, find Airplane Mode and then turn it on. This has been simplified in iOS 7, with the new Control Center. Swipe up from the bottom of the device to see a selection of quick access buttons, then toggle Airplane Mode, Bluetooth, screen brightness and other settings with a single tap. It actually works a lot like Android, but it’s an improvement nonetheless.

This should make it a lot faster to connect to wireless accessories in flight (like a Bluetooth GPS or a WiFi ADS-B receiver), and it also puts the calculator and timer features close at hand. Both of these can be helpful in the cockpit. Finally, the Control Center also features a flashlight button that turns on your camera flash. While it may sound like a gimmick, we’ve been surprised how frequently we use free flashlight apps on pre-flight inspections, and this makes it a little easier. The new Control Center even works from the lock screen.

We talked to Tyson Weihs, CEO at ForeFlight, and he agrees: “As a pilot and iPhone/iPad user, Control Center is awesome. Part of the pre-flight checklist in my airplane is disabling cellular radios, adjusting brightness controls for better battery life, and enabling Bluetooth so I can get ForeFlight audio alerts. Being able to access those settings quickly from Control Center will reduce the number of taps and touches required to adjust settings.”

Multitasking gets a big upgrade in iOS 7.

The ability to switch back and forth between apps (multitasking) has always been an area where iOS lagged. Currently, pilots have to double tap the home button, then choose an icon to switch apps. In many cases, it’s not much different than simply closing the current app and choosing another from the home screen, especially since background apps can’t do much.

iOS 7 promises a much smarter multitasking system. It will monitor which apps you use most often, and use that information to determine which ones need more full-functioning multitasking. For example, iOS 7 will allow background app processing so that apps will work more quickly and intuitively when they start back up. When switching between apps, you’ll also see a preview of the screen, not just an icon.

The practical effect here is that some aviation apps may be able to do a lot more in the background. For example, ForeFlight has enabled limited background downloading of charts, but this is really just tricking the system and it’s limited. With iOS 7, this should be much more powerful, and keeping content updated in apps that are running in the background should be a lot easier. Weihs says, “The new multitasking support and background push notification capabilities could let us do things, for example, like trigger background downloads when wireless connections are strongest and trigger background downloads as soon as charts become available, ensuring the most current charts are always aboard. We can get much smarter about digital chart delivery.”

The big question here is what effect this new multitasking system will have on battery life–some Android phones have terrible battery life when running multiple apps in the background. Look for more details here later in the year.

The new AirDrop feature could have uses for pilots, like sharing flight plans.

This feature allows you to share files and photos directly with another iOS device–eliminating the need to send an email or text message. While this is a great way to share a photo or contact with a friend, there are also some interesting potential uses for pilots. You could share a flight plan with your copilot, for example, without an internet connection (using Bluetooth). It will be interesting to see how well developed this feature is; Apple says it will work with “any app with a Share button.”

App updates are one of the best features of iOS, as app developers continuously release new features that are free and instantly available via download. But you have to remember to do those updates to get new features. iOS 7 promises to make most of these updates automatic, so your apps will always be up to date. Much like multitasking, the software will only schedule updates at convenient times–like when you are connected to WiFi and the screen is on.

One of the overlooked features of the iPhone and iPad that makes it so powerful is the built-in sensor package. Smart app developers have used the on-board GPS, gyro and accelerometer to do interesting things–like a simulated instrument panel. Buried in a footnote about iOS 7 was the bullet point that an inclinometer will now be available. This is used in turn coordinators in airplanes, so there are some exciting possibilities for aviation use if a gyro, accelerometer and inclinometer were combined. It certainly won’t be an AHRS replacement, but there could be some entertainment value if nothing else.

While recording video is hardly a core feature for pilots, the latest version of the iPhone in particular is an excellent video camera–on part with many purpose-built HD cameras. iOS 7 promises to add even more high end features, including the option of 60 frames per second recording. While 30fps is plenty for everyday use, 60 fps allows for great slow motion video.

iOS 7 is available now for developers, and will be available to the public this fall. Surprisingly (in a good way), Apple announced that it will be compatible with iPhone 4 or newer and iPad 2 or newer. Those are the same requirements as iOS 6, and it should have iPad 2 owners breathing a sigh of relief.

This is a major change, no doubt about it, but a lot of it relates to non-aviation uses like the Photos app, internet radio and Siri. We think iOS 7 will be an update almost everyone will want to do, but it certainly doesn’t make iOS 6 obsolete for aviation use. It does reinforce that iPhone 3G/3GS and iPad 1 users should be thinking seriously about upgrading. Those products will not get any more updates.