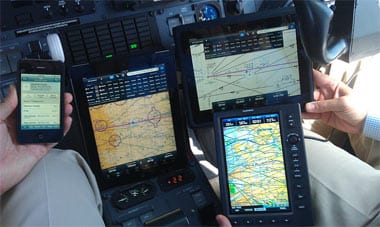 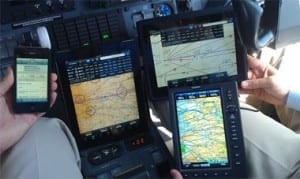 Make sure you have 3G turned off in the air.

At this point there’s no question that the iPad can be a very useful tool in the cockpit. If used for nothing more than displaying electronic charts, it’s worth its weight in gold. One thing you have to keep in mind, though, is that you will be using this portable electronic device in close proximity to your avionics, and there’s the potential for interference. The fact that the iPad also serves as a communications device increases this potential.

On a recent IFR flight in a Bonanza A36, we were flying in IFR conditions towards Nashville, TN, at 6,000 ft. We were relying on a panel-mount IFR-certified KLN 90B GPS for primary navigation, and had an iPad 3G mounted on the yoke column displaying a larger moving map. Halfway to the destination, the red NAV flag appeared on the HSI, and the GPS stopped displaying navigation data. A quick look at the satellite status page showed only one satellite was being received, and it was searching for others. We reset to the unit’s power, and everything worked fine for about 20 more minutes–until it again lost signal two additional times.

When arriving back to Sporty’s at the Clermont County Airport, we informed the avionics tech about the GPS problem. After some testing, they found nothing wrong with the navigation equipment in the Bonanza, but he asked if there were any devices with a cell phone radio turned on during the flight. We typically always turn off all cell phones before departure, but we unknowingly left the 3G Cellular Data enabled on the iPad–and the iPad was less than 6 inches away from the GPS unit. We determined this was the culprit.

Many people recommend putting the iPad in Airplane Mode, using the toggle switch at the top of the settings page, to reduce the possibility of interference in the cockpit. This mode, as the name implies, was designed to disable all the wireless features of the iPad to comply with airline regulations. While it will almost certainly limit the possibility of interference, it also restricts some features that you may find useful as a pilot in Part 91 flying.

With all that being said, we recommend a different approach for getting your iPad ready for flight. Instead of using the catch-all airplane mode, turn off the individual wireless functions that aren’t needed (always the 3G cell data). Here’s where you’ll find each setting: