Blog - Latest News
You are here: Home1 / News2 / Apple’s iPad Finally Gets a Redesign With USB-C And Edge-To-Edge...

As has come to be expected, Apple has announced new iPads for the fall season. This year’s updates bookend the product lineup with improvements to both the top of the line Pro model as well as changes to the entry-level standard iPad. 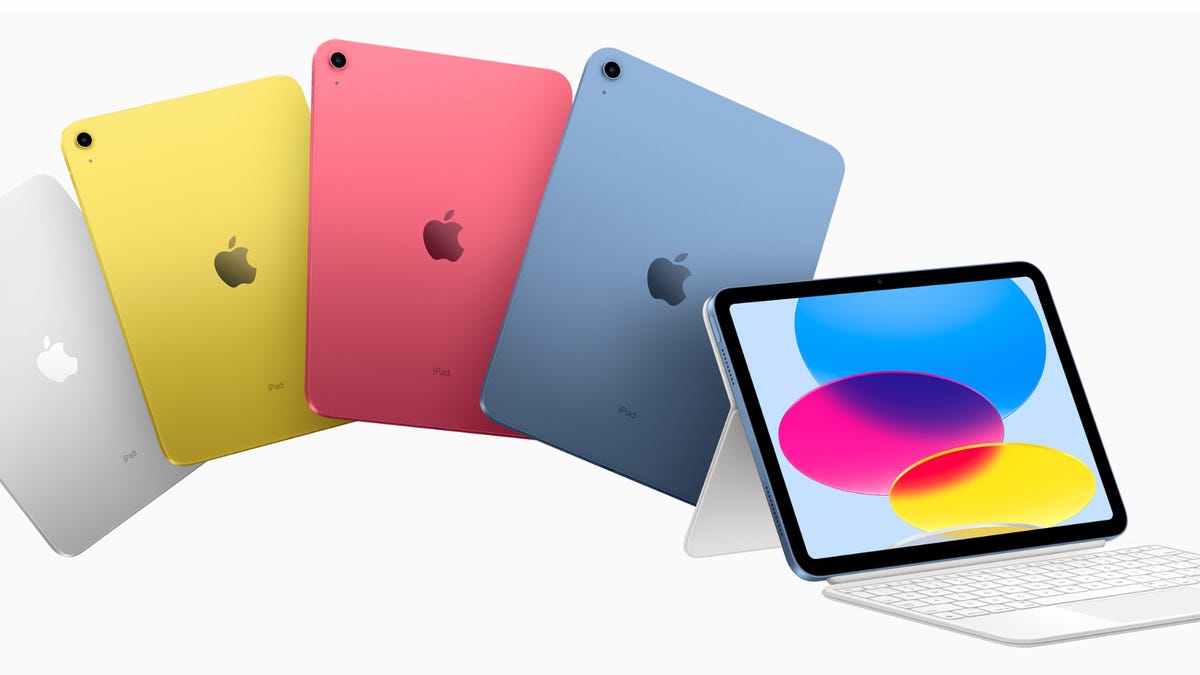 2022 marks the 10th generation of the iPad and it also brings a price increase. The entry-level iPad has maintained a relatively reasonable price of $329 for several years and a bump in price is not surprising. The 10th-gen iPad can be pre-ordered now starting at $449 but you can still buy last year’s iPad model (starting at $329).

Not only is the iPad available in four colors but Apple has assimilated several features from other models in the lineup to justify the increased price tag. The home button is finally gone once-and-for-all. The touch ID sensor has been relocated to the power button, similar to the iPad Air, which allows the display to be stretched to a larger 10.9″ on the diagonal. Additionally, the processor was bumped up from last year’s A13 to an A14 for snappier performance when rendering data-driven map layers or large, stitched together sectional charts. Other miscellaneous improvements include a better back camera, 5G cellular connectivity, and the lightning charge port has been replaced with USB-C (just like the iPad Pro).

A specially designed Apple Magic Keyboard Folio ($249) creates a new typing experience for the iPad and the Apple Pencil 1 is now also compatible. Existing Pencil 1 users can connect with a $9 USB-C adapter. Another interesting note: the front camera is now moved to the landscape edge of the display so video is now better centered when resting on a stand.

Considering the increase in specs while still selling at a reasonable price, this entry-level offering is a solid tablet for the cockpit and should be a tempting solution for any pilot considering getting started flying with an iPad. 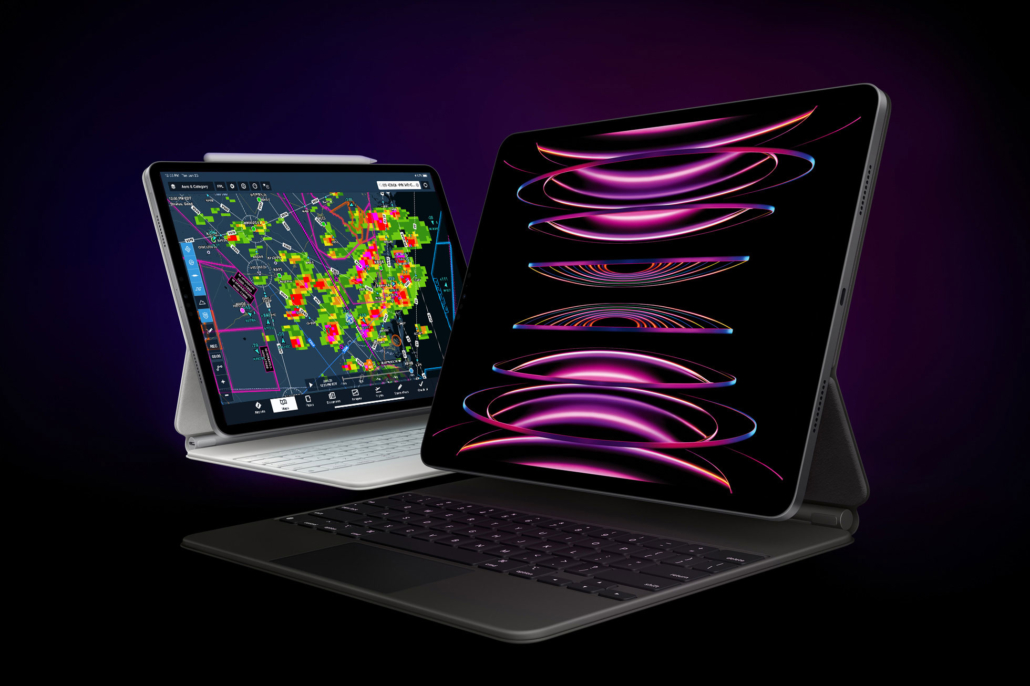 Along with the entry level iPad, both the 12.9″ and 11″ versions of the Pro are getting updates this fall. Its been a year and a half since the iPad Pro received the first generation M1 series chip and this year, Apple is proud to tout “breakthrough performance from the M2 chip.”  The new 8-core processor is claimed to be 15% faster than the predecessor and the 10-core GPU provides 35% faster graphics performance. The power of the M2 seems to be geared more toward content creators, specifically with the ability for the tablet to process Apple’s premium ProRes video codec even faster.

The newly announced Pro also supports new pencil hover technology that detects the Apple Pencil before it even contacts the display. This could make jotting digital notes in the cockpit a little easier. You’ll also get full support for an external monitor by connecting with the USB-C port.

Using an iPad Pro with iPadOS 16 will also unlock additional pro-level features including:

The iPad Pro may be a bit overkill for a singular flight deck tablet solution, but if you’re a creative professional who can divide the mission, the iPad Pro is the ultimate in mobile computing and is likely to offer the best longevity. 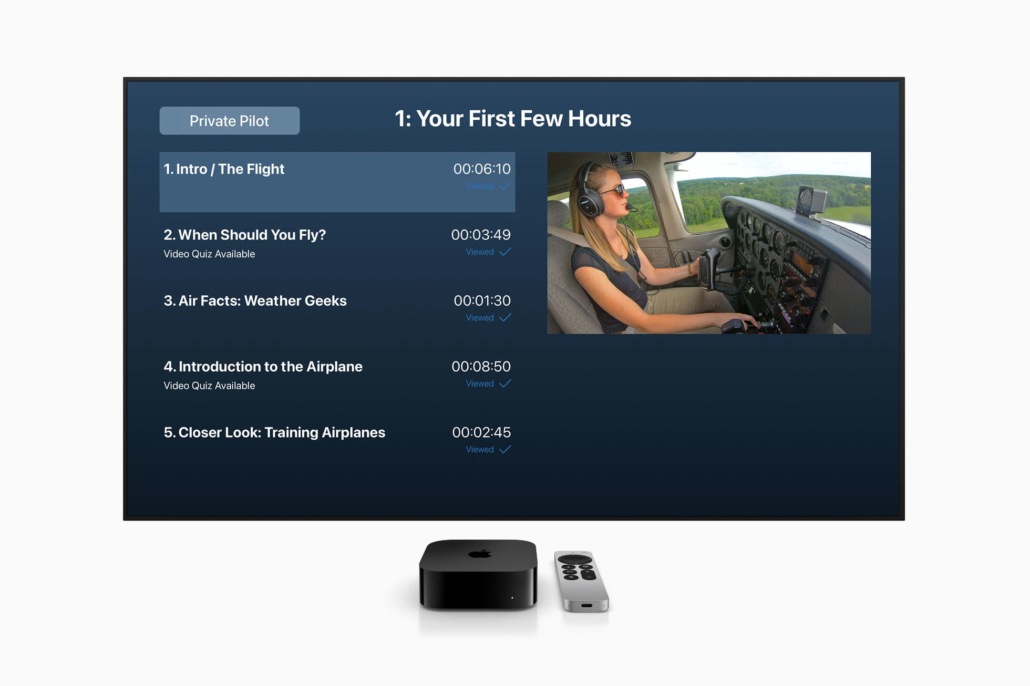 Last and maybe least comes a modest update to Apple’s smart TV, with the next generation of Apple TV 4K. The Apple TV is now powered by the A15 processor, which includes support for HDR10+ so users can watch their favorite movies and TV shows in the best quality possible. The Apple TV is also available now with a gigabit ethernet connection for improved streaming capability as well as increased storage capacity (up to 128GB). The Apple TV is also an excellent way to study for that upcoming pilot certificate or rating using Sporty’s Pilot Training app.