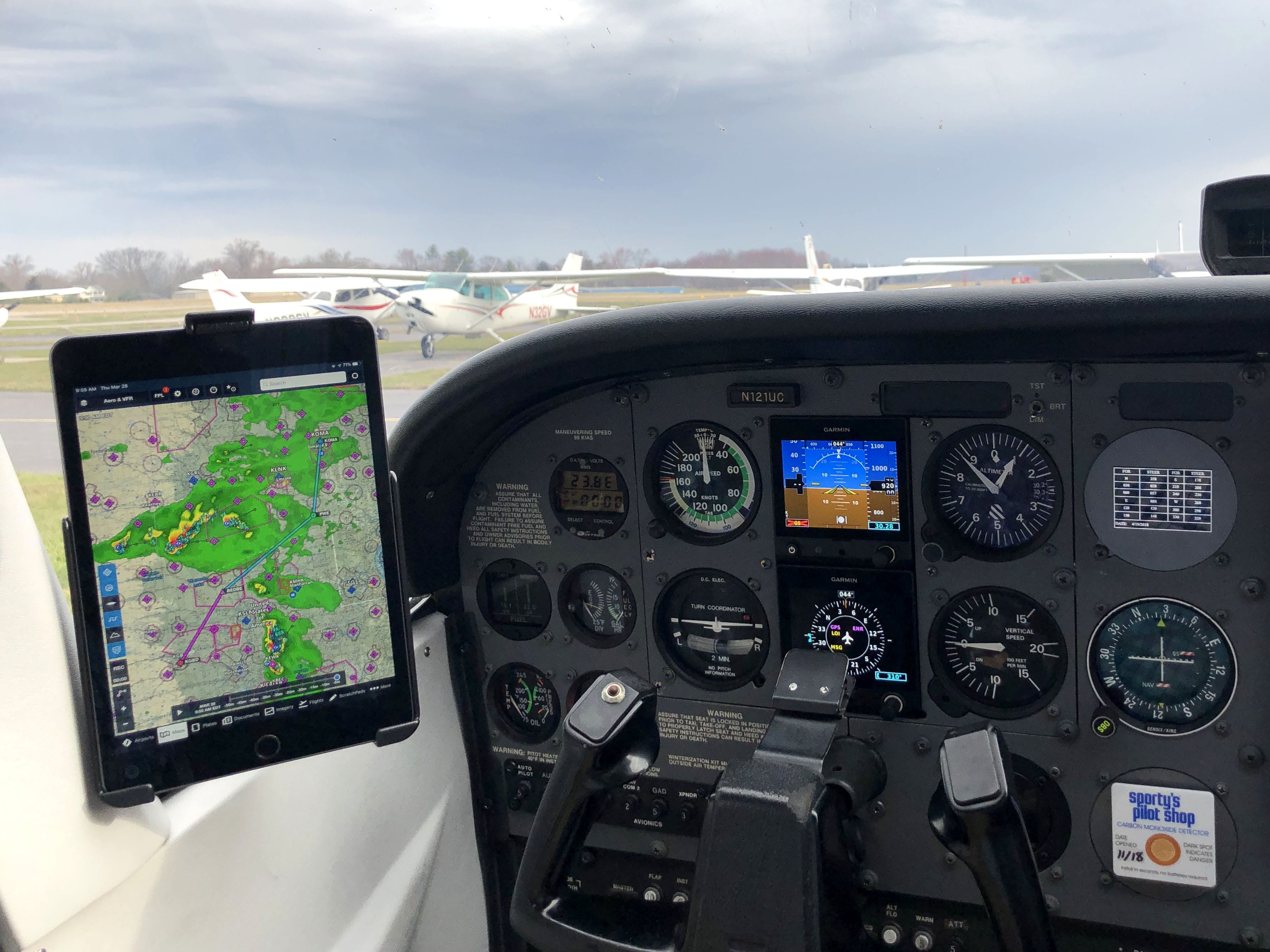 Apple unveiled the first update to the iPad Mini last week in nearly four years, and there is no group more excited about this new model than pilots. We received our new model today and put it through the paces in the cockpit. Our initial reaction? You’re going to love it – here’s why. 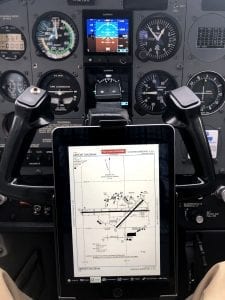 The iPad Mini is a favorite among pilots thanks to its small footprint, lightweight design and affordable price. Unlike the new Pro iPad series from Apple which uses an all-new design and no home button, the new Mini 5 is the exact same size as the iPad Mini 4. This is great news for current iPad mini owners looking to upgrade and use existing accessories. It also uses the same Lightning charging cable, so there are no new chargers or cables to carry in your flight bag.

Pilots will also appreciate that it uses the same buttons and controls as the iPad Mini 4, including the tried and true home button with TouchID, so there are no new gestures or FaceID concerns to deal with in the cockpit. The battery in the new Mini is the same as previous models, but if you’ve been hanging on to an iPad Mini 4 for a while that has been through lots of charging cycles, you’ll likely notice a nice increase in battery life with the new model.

High-performance in a small package

We regularly fly with all models of iPads in our flight operations, ranging from an iPad Air 2 to the new iPad Pro 11″ model. While the A12 processor in the new iPad Mini isn’t quite as fast on paper as the Pro models, you wouldn’t know it when using aviation apps. Sectionals and maps load just as fast on the Mini as the Pro and switching between screens and apps is instantaneous.

The new Mini also includes the anti-reflective screen coating that’s been a pilot-favorite feature on the Pro line of iPads. We did a quick test putting the new Mini side-by-side with the iPad Pro 11″, and it was equally as bright and readable in the cockpit. 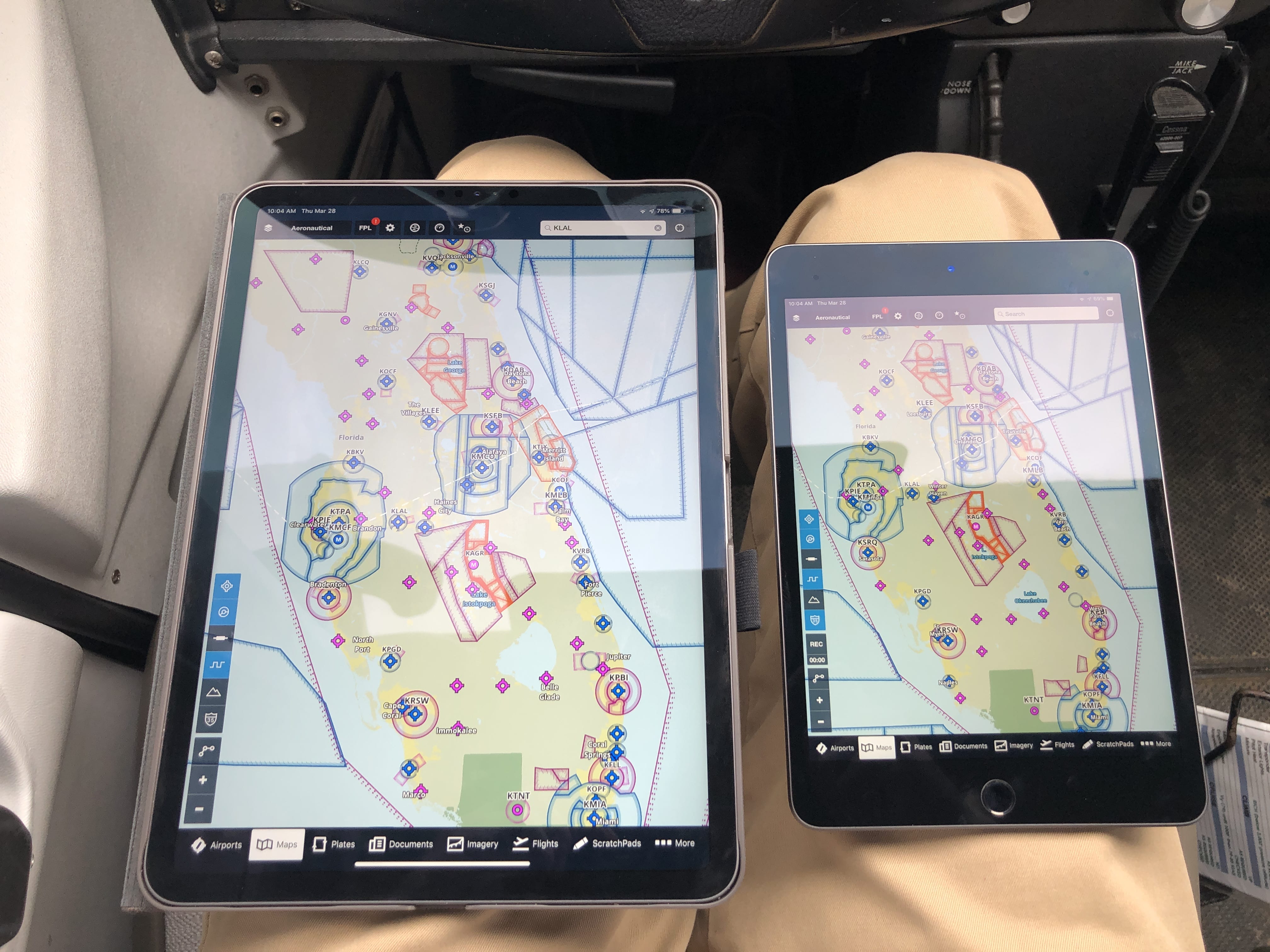 The iPad Mini 5 can also take advantage of all the multitasking features, like split and slide-over views to interact with two apps simultaneously. 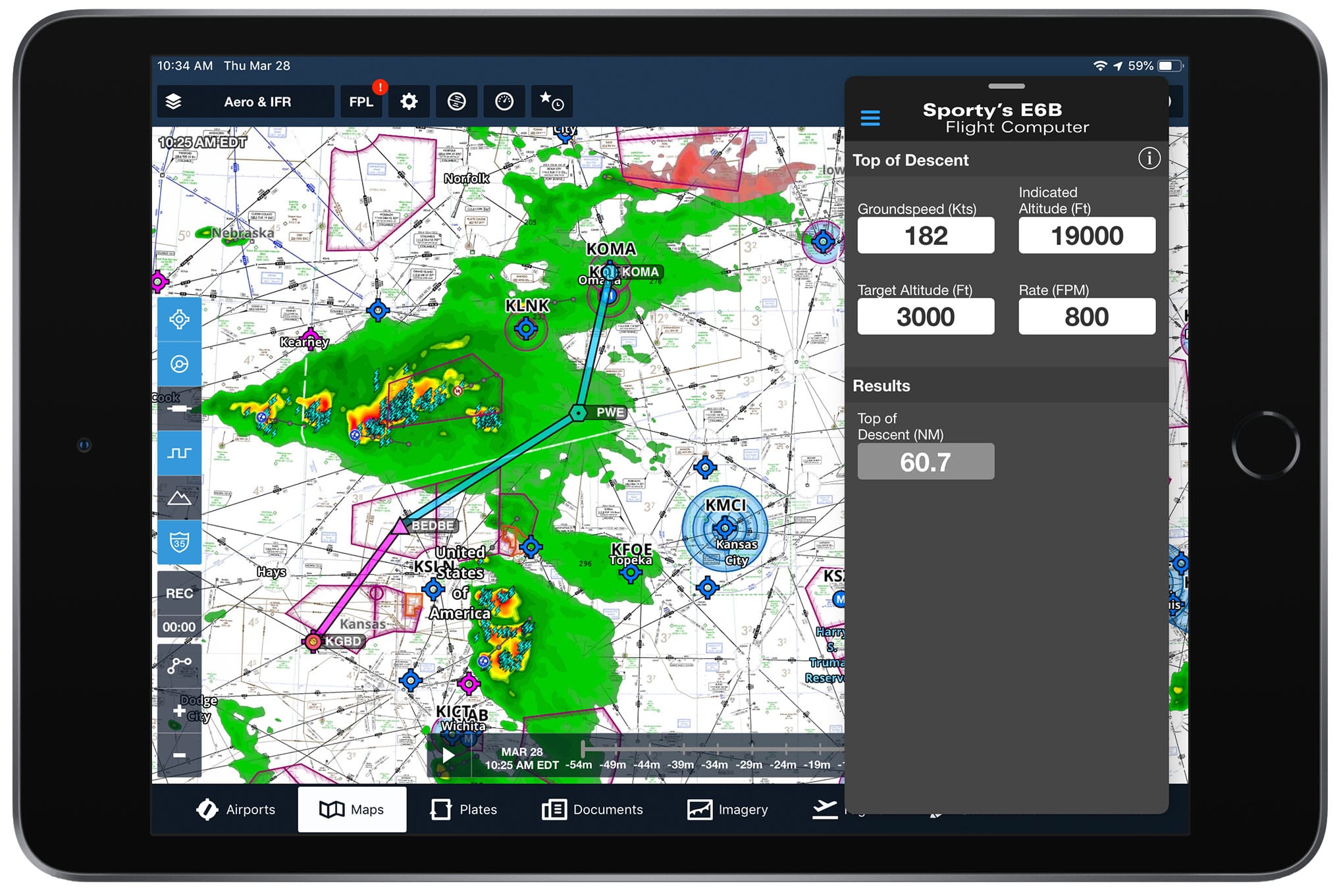 It also includes Apple Pencil support (the original Pencil, not the new one announced late in 2018), allowing you to more accurately jot down notes and clearances in flight.

The iPad Mini offers the most flexibility when it comes to mounting in the cockpit and works well in many locations. A favorite option among pilots is to use a suction cup to mount it on the left side window, where the Mini’s smaller size doesn’t block much of the view in the lower section of the front window.

In the example illustrated above, we used the popular RAM suction cup kit, which incorporates a form-fitting cradle to hold the iPad securely in place. If you’d prefer to keep a case on your iPad Mini and still mount it this way, consider either the RAM 7″ X-grip or the RAM spring-loaded cradle.

There’s an alternative to RAM mounts that recently hit the market, called the Robust Mounting System. These are less expensive and customizable and work well with the iPad Mini (or any size tablet for that matter).

On the other end of the spectrum, MyGoFlight offers a premium iPad Mini mounting system that can be used with an articulating arm for increased flexibility in mounting when using a suction cup.

The Pivot Case system, used by Southwest Airlines, provides both a protective case and suction cup mounting system that is fully compatible with the iPad Mini.

For those that fly in warmer climates, the X-Naut cooling case also has a model that is compatible with iPad Mini. This unique case incorporates cooling fans, allowing you to run the iPad in temperature and sunlight conditions that would normally cause it to overheat. 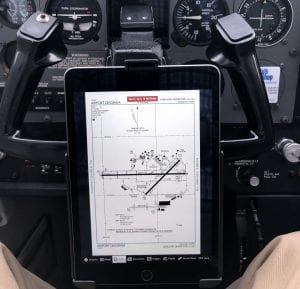 The iPad Mini works equally as well mounted on the yoke since its smaller size and weight won’t block the instruments or affect the feel of the flight controls. Most of the suction mounts listed above offer companion yoke mount options:

The last option to consider is a kneeboard, which works well for aircraft without a yoke and for those want additional protection and pockets to keep accessories within reach. There are many options here, ranging from basic straps to protective kneeboards with lots of organization. Here are links to the various options, and make sure to check out our kneeboard buyer’s guide for a comprehensive review: 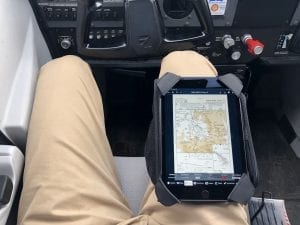 We were glad to hear that the new iPad Mini 5 retained the same affordable price of $399 for the 64GB model, but we’d recommend paying the extra $150 and upgrading to the 256GB to ensure you have plenty of space down the road for all your apps, aviation databases, and media. Like with other iPads, you can upgrade to the model with Cellular data for an extra $130, which also adds an internal GPS.

How to use ForeFlight’s new Passenger app