Slowly but surely, the aviation app landscape has changed over the last three years, as the market moves into a more mature stage and the number of new electronic flight bag (EFB) apps decreases. Whereas the market was once packed with dozens of small companies with similar apps, lately pilots have chosen between just a few big players. In fact, our latest surveys show that over 90% of general aviation pilots are flying with either ForeFlight, Garmin Pilot, or Fltplan Go.

That trend looks set to continue, or even accelerate, as Garmin announced today they have acquired Fltplan.com, including the popular flight planning website and EFB apps. Terms of the deal were not released, but Garmin says the Connecticut headquarters of Fltplan.com will continue to support the product line.

The motivation for such a deal is fairly obvious, but it’s worth considering how many complementary parts there are. For one, Fltplan.com has a large user base, especially among turbine pilots and charter/fractional companies. The company claims they have 165,000 registered users who create more than 6 million flight plans per year – over 50% of all N-registered flight plans. Do the math and you find that Fltplan.com customers are filing an average of 36 flight plans per year, meaning they are an active group. The acquisition instantly adds a huge new list of pilots to the Garmin ecosystem, which has been growing but still trails ForeFlight by a significant margin in the app world.

Beyond the new customers, Fltplan.com also gives Garmin a much more complete suite of tools, including pre-departure clearances (PDCs), eAPIS services, runway analysis, and Safety Management Systems (SMS). Fltplan.com is also know for extremely accurate performance models, which can predict flight times and fuel burns within one or two percent. These higher end features will be especially valuable when competing against ForeFlight, which has been pushing into the turbine market aggressively over the last year. The feature gap between the two companies is much smaller now.

The deal raises some important questions, too. Fltplan.com’s business model is quite different from Garmin’s. Their apps and website are free, supported by a combination of ads and premium services (the eAPIS service, for example, costs $249/year). Garmin’s apps, by contrast, require an annual subscription. Both companies offer iOS and Android versions of their apps. 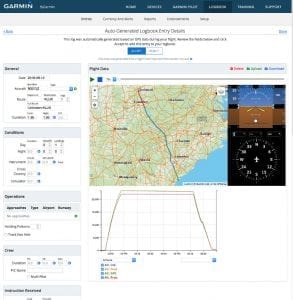 Garmin’s website has been adding features over the last year, and might get even more with the addition of Fltplan.com.

If that’s the case, we would expect some Garmin features to migrate into Fltplan Go and vice versa. For example, Fltplan.com’s performance models would be a nice addition to Garmin Pilot.

Another area to watch is website integration. Garmin has slowly been building additional features into its fly.garmin.com website, including device management and logbook entries. Might some of Fltplan.com’s online flight planning features come to the Garmin website? Koss says the company is still evaluating those opportunities: “It’s too early for us to announce anything at this time.”

This will certainly be an interesting story to follow over the next few months. The battle between Garmin and ForeFlight is heating up, and pilots will probably be the winners.