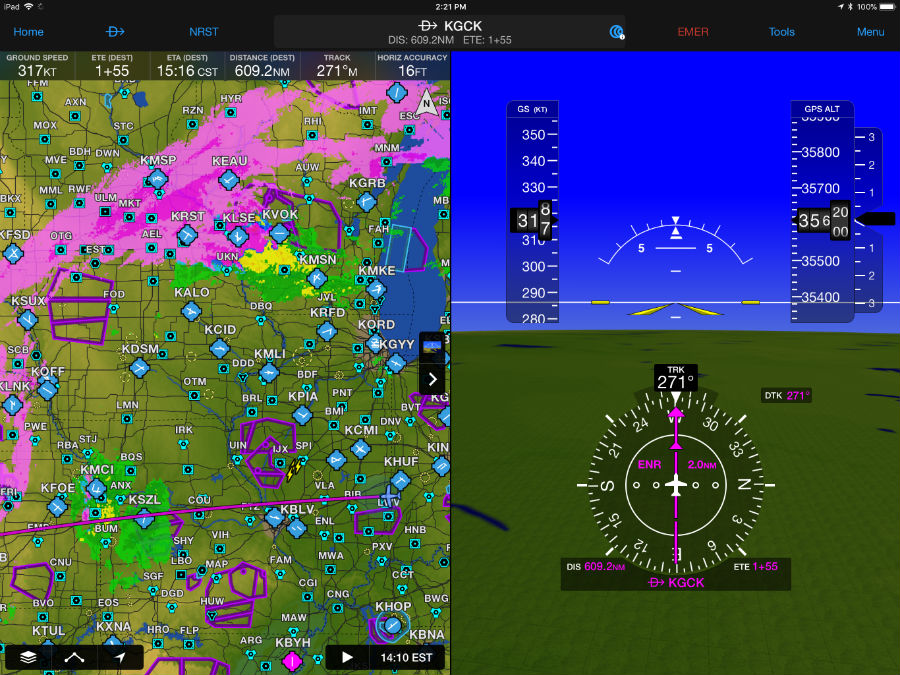 ADS-B or SiriusXM? For the past seven years, that has been one of the first questions iPad pilots have asked when considering the options for in-flight weather. ADS-B does not require a subscription, making it very attractive for pilots who fly infrequently or for those looking to save some money. However, ADS-B does not work everywhere, especially at low altitude, so some other pilots prefer the go-anywhere-any-altitude capability of SiriusXM satellite weather. Sure, it requires a monthly subscription, but it offers more weather products and more coverage.

We’ve taken it flying on multiple trips and have been impressed. Here’s a full report.

The GDL 52 is a small, battery-powered receiver that sits on the glareshield just like other Garmin portables. Simply turn it on and connect it to your tablet via Bluetooth, then open the Garmin Pilot app. From the Map page, tap the layers menu at the bottom left corner to see the options. You’ll notice under Radar there are four choices: Internet (full resolution that only works on the ground), FIS-B (the subscription-free option from ADS-B), SXM (the composite radar image from SiriusXM), and SXM Base (the lowest tilt angle radar, which is often what the TV weather reports use).

There are also options to turn on the SiriusXM infrared satellite image, as well as storm cells, echo tops, lightning, icing and turbulence forecasts. These are all exclusive to SiriusXM, while both ADS-B and SiriusXM offer METARs, TAFs, PIREPs, TFRs and SIG/AIRMETs.

Here is an example of the ADS-B radar image, zoomed out to a fairly wide scale. 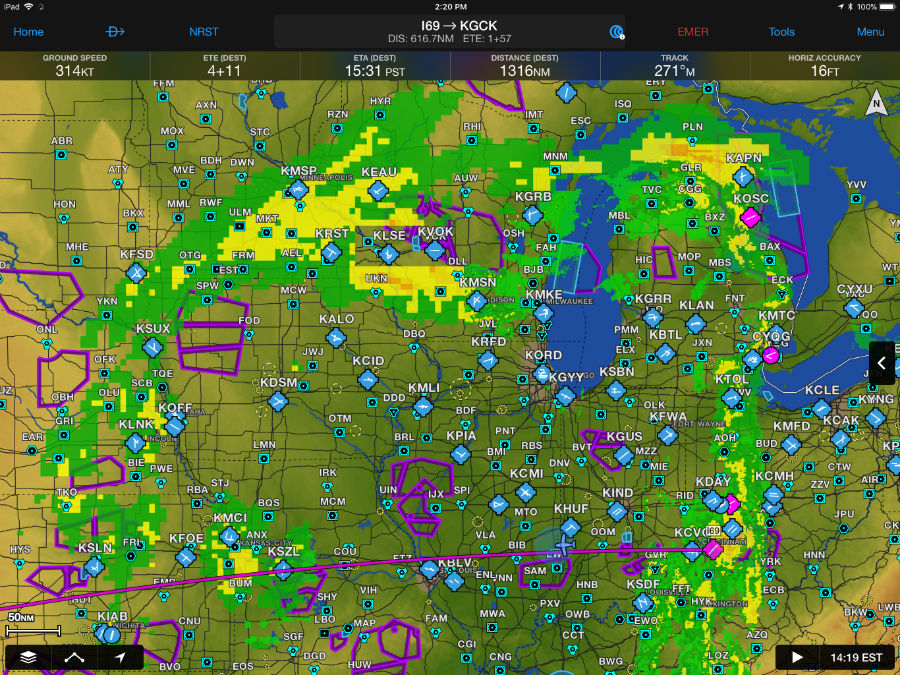 The SXM product is slightly higher resolution than the ADS-B radar image, especially at distances far from your location (ADS-B radar is typically only higher resolution within about 250 miles of your airplane). There’s also the added benefit of SiriusXM’s color-coded radar, so you can see where areas of mixed precipitation or snow might be. 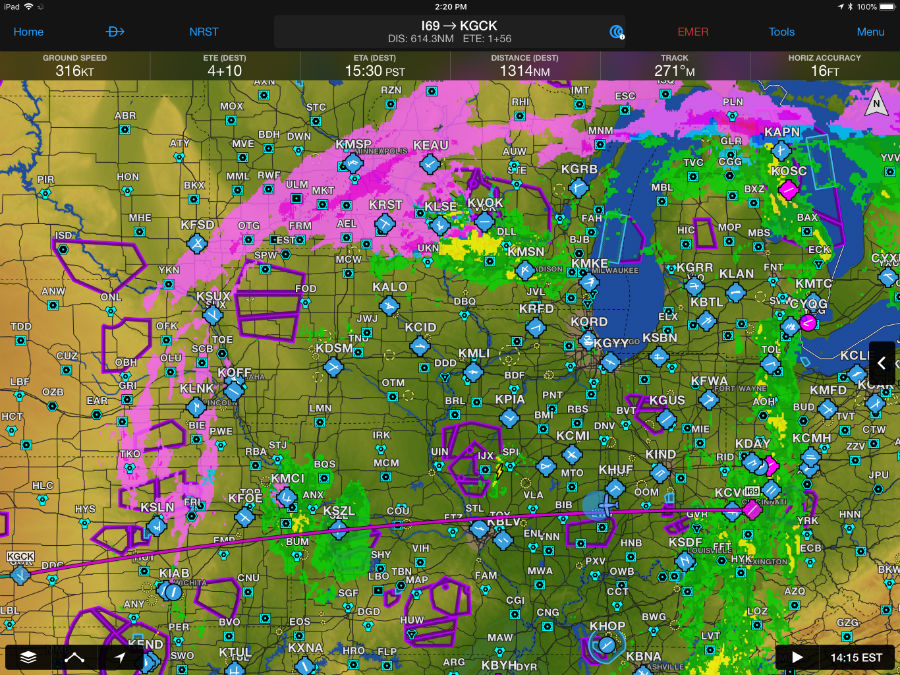 Garmin Pilot does a great job of stitching together both data sources. In this example, we can read the TAF for a nearby airport from ADS-B, with SiriusXM used for a distant airport (since ADS-B only shows text weather from Class B airports beyond about 500 miles). The combination means you always have up-to-date weather and no messy configuration. 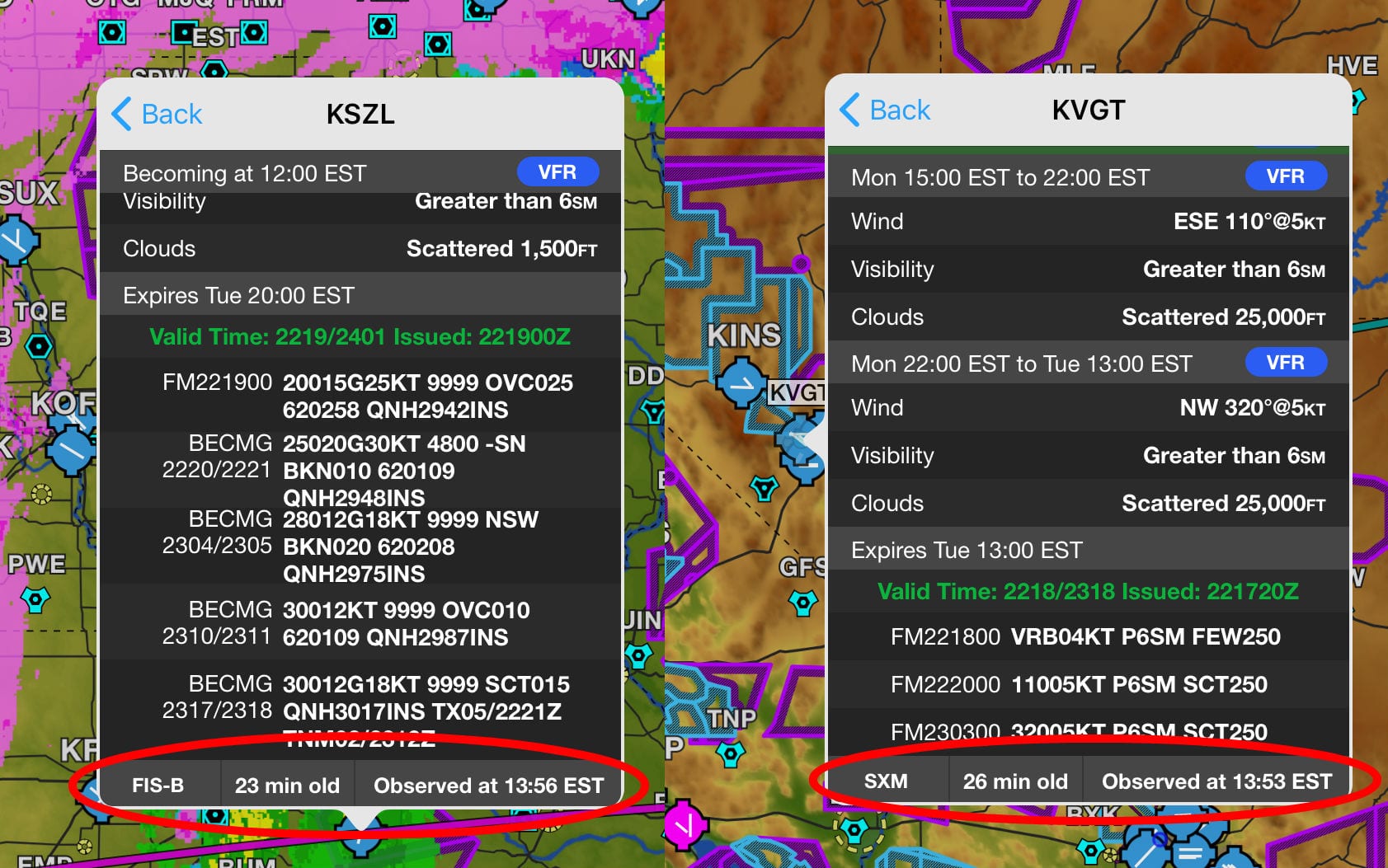 As always, you can find complete status information in the Connext tab. 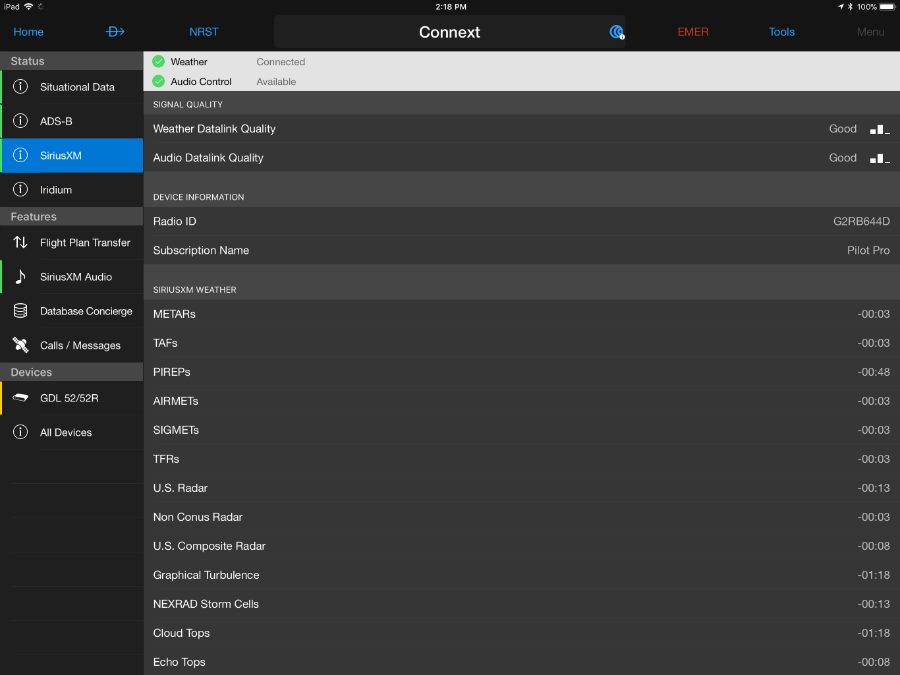 In addition to the ADS-B and SiriusXM receivers, the GDL 52 also has a built in GPS receiver and an attitude heading reference system (AHRS). That makes it an all-in-one tool, driving the app’s moving map and backup attitude display. We found the combination of synthetic vision and moving map with weather to be a powerful setup.

As always, SiriusXM brings more than just weather. The GDL 52 can also stream SiriusXM radio, which we enjoy on longer trips – especially with passengers. The audio can be streamed wirelessly over Bluetooth to compatible headsets, and there’s also an audio-out plug. Channel and volume controls are in the same Connext menu. 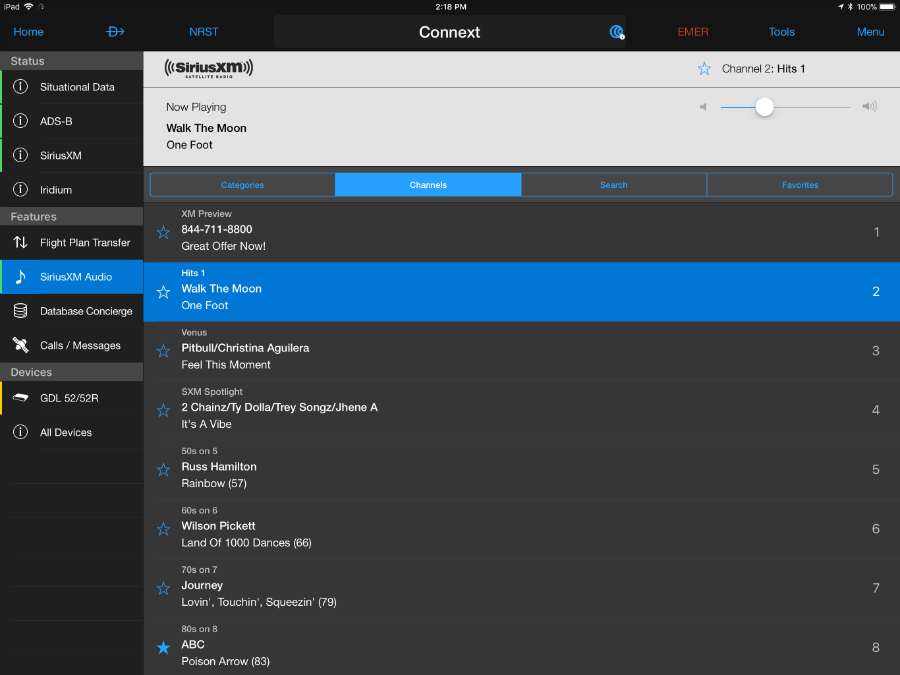 The GDL 52 may be overkill for pilots who don’t fly high performance airplanes or longer cross countries. For them, a GDL 39 3D (which is ADS-B only) or a GDL 51 (which is SiriusXM only) might be a better fit at a lower price. But we can think of plenty of scenarios where it would be useful to switch back and forth from ADS-B to SiriusXM. Maybe subscription-free is good enough for the slower winter flying months, but SiriusXM is better for the big trip to Oshkosh or a flight to Canada. SiriusXM does allow you to pause your subscription for up to six months. Also don’t forget that the addition of ADS-B means you have traffic in addition to weather. This was our favorite mix, with high resolution radar alongside ADS-B traffic.

The GDL 52 works with the Garmin Pilot app on iOS and Android devices, as well as Garmin portable GPSs like the area 660 and 796. It is available now for $1149, and SiriusXM is including three months free of their Pilot Preferred weather package and their All Access audio subscription as well. There’s even a $200 rebate through the end of the year.