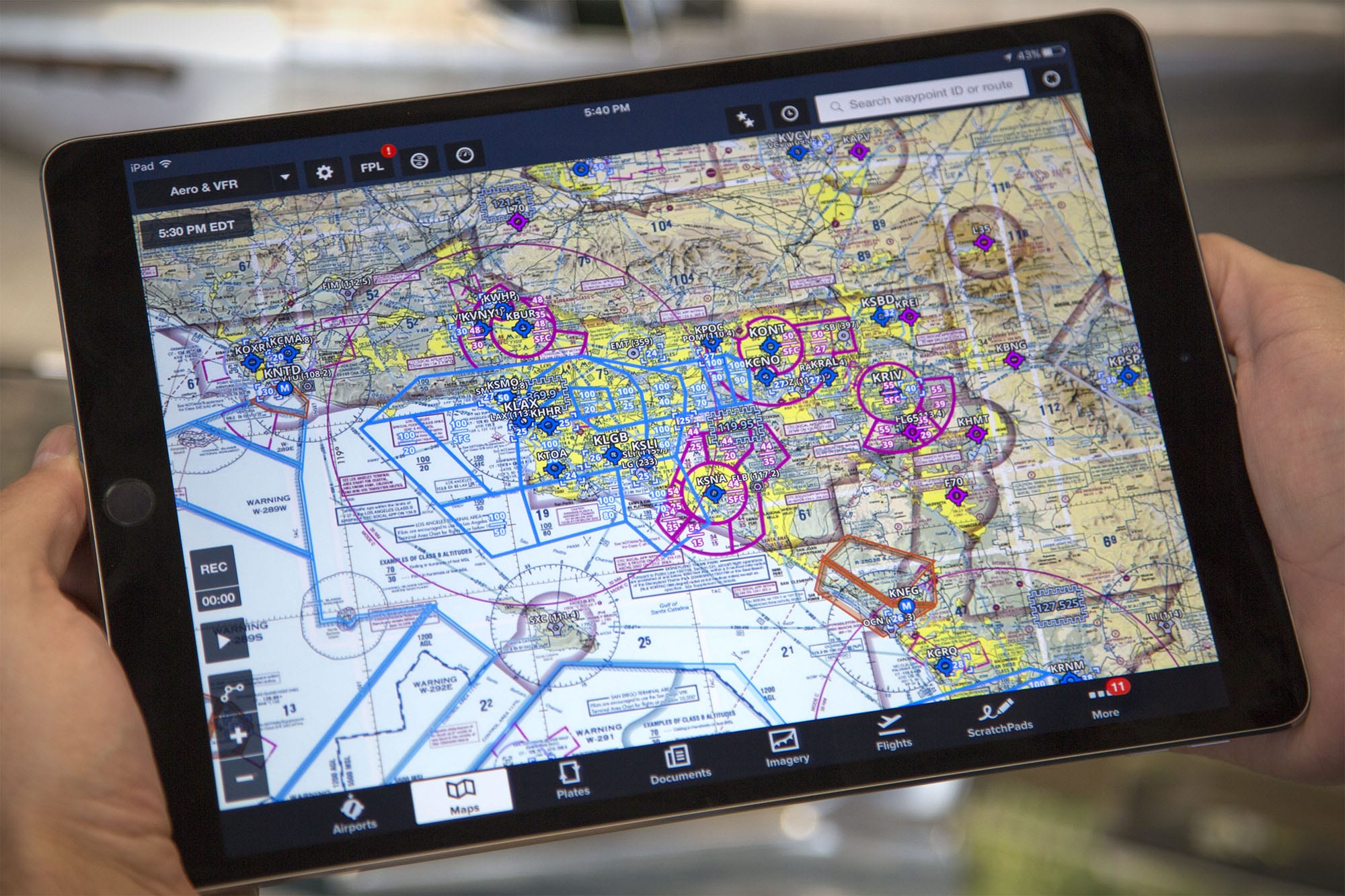 Apple introduced the new 10.5″ iPad Pro at their annual developer’s conference last week and they’re already being delivered to customers. The new Pro model replaces the 9.7″ iPad Pro and includes a bigger screen, upgraded processor, and a few other hardware tweaks. We received the new iPad yesterday and have been using it side by side with our 9.7″ iPad Pro in the office and in the airplane to see how it stacks up. Here’s a summary of our initial thoughts.

First impressions on the ground

Out of the box, the initial setup is a breeze using iCloud to sync up all your apps, data and preferences. Once the home screen gt up it was instantly apparent that Apple made some significant improvements to the display. While the screens on the older iPad Air and Pro models are already impressive, the new 10.5″ Pro screen is clearly a different animal, especially when viewed side-by-side with the previous models. The colors are more vibrant, the black levels are deeper and the overall display is much brighter at the max brightness setting.ht 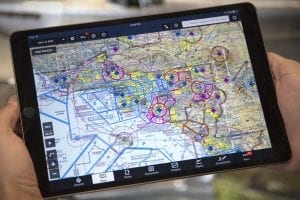 The next display improvement you’ll see is the improved refresh rate, which was doubled from 60hz to 120hz. You’ll really notice it as you scroll vertically through lists of data in your favorite app, or pan and zoom around aviation charts. All the text and graphics stay sharp as you move around the screen, allowing you to easily read and interpret the data while swiping around. It also makes for easier reading when scrolling through web pages, magazine apps and news sites.

What surprised us the most was how much bigger the screen appeared when placed next to the 9.7″ Pro and iPad Air models. While the screen measures only 0.8″ larger diagonally, it adds nearly 15% more screen size and gives the tablet an immersive feel. Best of all Apple achieved this by slimming down the front-facing bezels, while only adding 0.2″ to both the height and width of the iPad frame. The slight increase in size is nearly impossible to detect until you attempt to use your previous iPad Air or iPad Pro form-fitting case and realize it won’t fit. 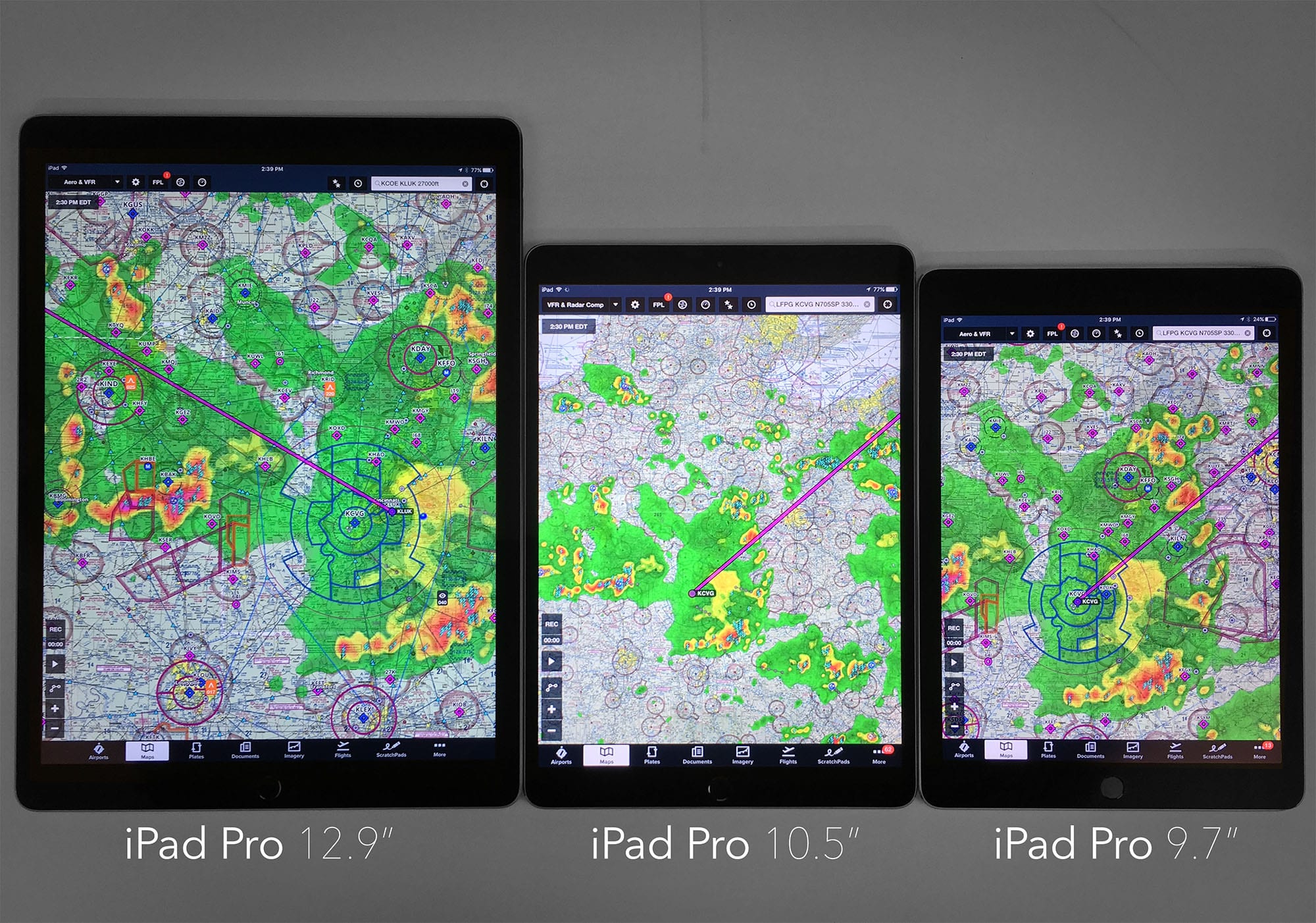 The 10.5″ iPad includes a more powerful A10X processor with a 12-core graphics processor, which Apple claims to be up to 40% more powerful than previous models. The previous-generation iPads, including the iPad Air 2 and 9.7″ iPad Pro, already featured lightning-fast processors, so from a pilot’s perspective, it’s tough to detect a noticeable improvement in speed on this new model. You’ll notice that data-driven maps and sectionals load more quickly when panning across the U.S., but we’re talking about improvements measured in fractions of a second. The real benefit will come to those using processor-intensive apps, like photo/video editing software and or games with 3D environments.

The camera on the new iPad is as good as it gets from Apple these days, using the same technology found in the iPhone 7. It can take 12MP pictures and record 4K video, which is a great resource in the cockpit to record dynamic weather and scenery during your flights.

Flying with the new iPad 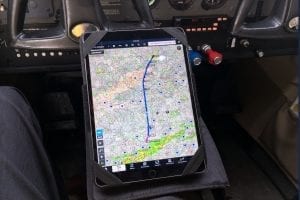 The new iPad Pro works well with kneeboards that use straps or flexible clips.

The first thing to consider when using the new 10.5″ iPad in the airplane is how to secure it. The good news is that since it is only a fraction of an inch taller and wider, it works well with most kneeboards and leg straps that use flexible mounting fixtures. We tested it with the following kneeboards and it worked well with each:

For those that prefer to mount the iPad using a RAM mount, there are a few more limitations. Since the RAM 9.7″ iPad cradle uses a rigid plastic mold, it will not accommodate the new model. You could, however, use the RAM 10″ X-grip to hold the new iPad and continue to your existing suction cup or yoke mount.

In the air, the new iPad Pro is right at home in the cockpit. The larger, brighter screen is clearly an improvement when viewing charts and aviation data in flight. It includes the same antireflective screen coating as the 9.7″ iPad Pro model, and it appears to offer about the same level of viewability when exposed to sunlight or other bright reflections.

We weren’t in the air long enough to perform a true battery test while using GPS and ADS-B receivers, but it’s safe to say based on Apple’s specs that battery life should be comparable to previous models.

The new 10.5″ model comes with larger storage options, including 64GB, 256GB and 512GB, which is double that of the previous iPad Pro. The base model starts at $649 for the WiFi only option and goes up to $1,079 for the 512GB model with cellular data. Like all previous iPads, you’ll need to buy the model with cellular data to get the internal GPS.

The 10.5″ iPad Pro joins Apple’s entry-level “iPad” that was introduced back in March. This basic model retains the familiar 9.7″ size and has internal specs comparable to the discontinued iPad Air 2. Best of all it starts at nearly half the price of the new iPad at only $329.

So which model is best for pilots? For those on a budget, you can’t go wrong with the less-expensive iPad model. You can upgrade to the larger 128GB model and still keep the price under $430. This features a bright retina screen and a processor that will effortlessly run all the high-end features in today’s aviation apps.

For those who want the latest and greatest and a truly incredible screen, it’s worth considering the new 10.5″ Pro. This iPad will provide the best user experience available today with a noticeably larger screen, smoother scrolling, and better camera, all while maintaining a form factor that is easily manageable in the cockpit.