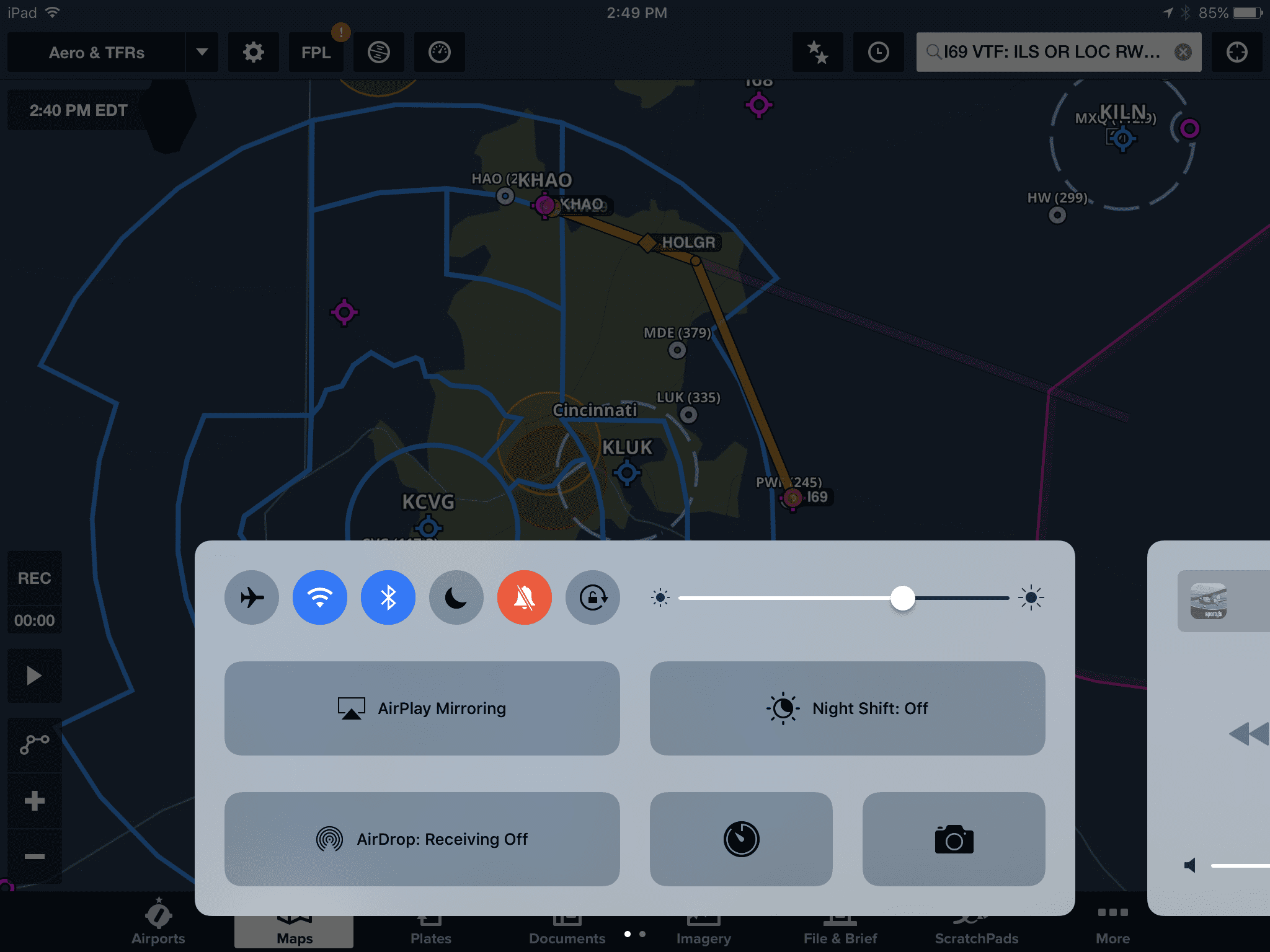 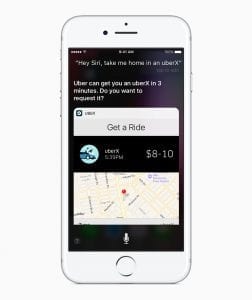 Apple released the much-anticipated iOS 10 software update for iPhone and iPad today, introducing a variety of improvements and new features for these devices. While the overall design hasn’t changed much with this update, you’ll find numerous improvements throughout the interface that make for a much better experience when using your iPhone or iPad.

Pilots should always be cautious about updating to a brand new version of iOS version right when it is released, due to the importance of the iPad and aviation apps to our flying. While Apple and app developers test the software extensively months in advance, all new operating systems have undiscovered bugs that need fixing and may cause unexpected device or app issues.

So it’s important to check for guidance from your aviation app developer and GPS/ADS-B receiver manufacturer to see what they have to say on the topic. To help with this task we started the iOS Green Light Program, which serves as your one stop shop to determine if your favorite EFB app or accessory is compatible with the latest iOS release from Apple. We keep in touch with all the major app and accessory manufacturer’s to get their recommendations on whether or not to update, based on their extensive testing with each  iOS release. The iOS Green Light page is updated regularly, so make sure to check back often to see when you’re safe to update. 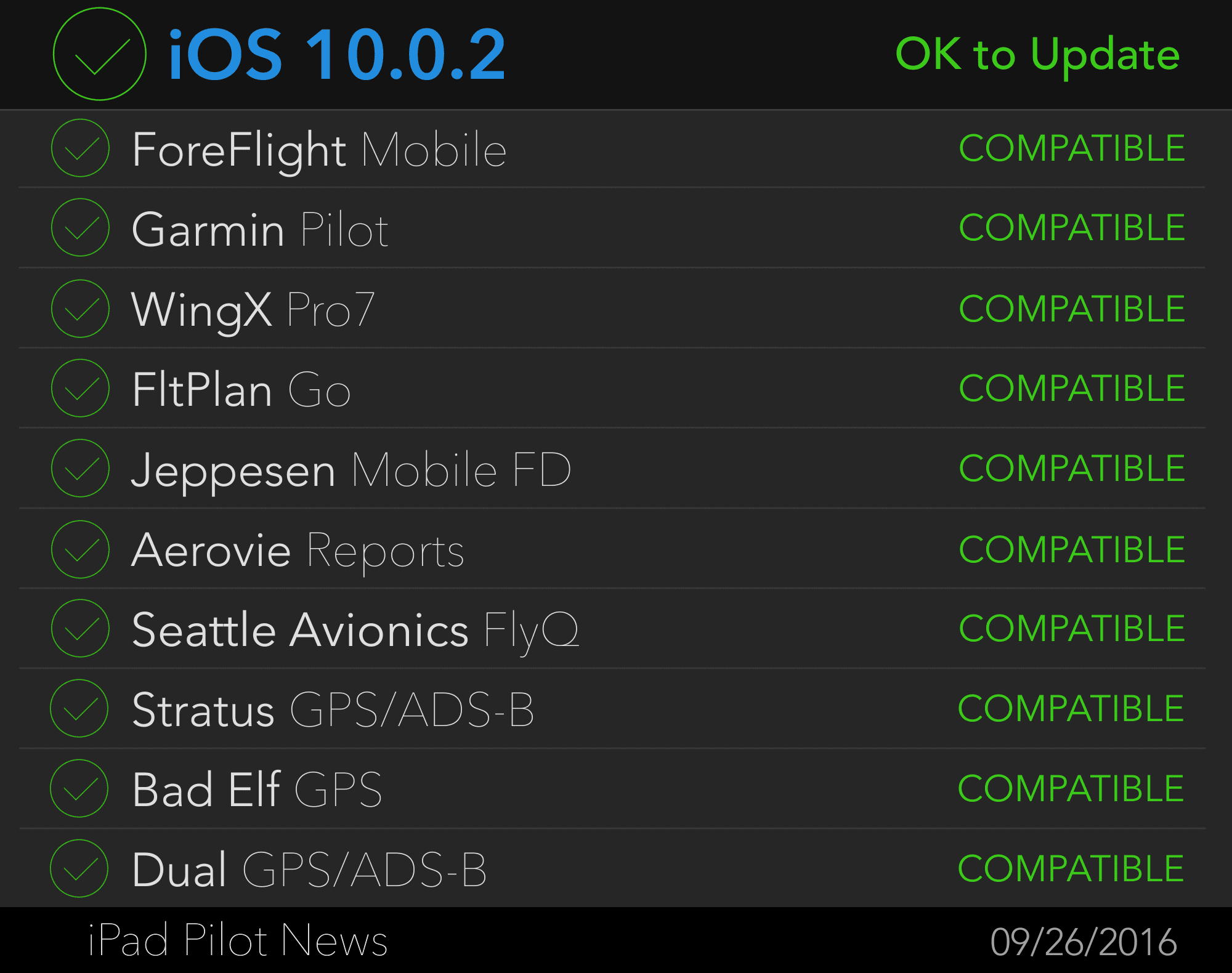 Like it or not, Apple typically drops support for older iPad models with each new major iOS release. This time around they left off the iPad 2, 3 and the original iPad Mini from the eligibility list. Here’s the short list of iPad models that are compatible with iOS 10:

And here are the compatible iPhone models:

When you decide you’re ready to update, the first thing to do is back up your device using iTunes or iCloud, following these instructions. Next make sure your device’s battery is charged and are connected to the internet via Wi-Fi, and go to Settings > General > Software update, and tap the Download and Install button.

You’ll find that this update installs pretty quickly, thanks in part to the smaller file size of the download. The iOS 10 update size is approximately 1 GB (size depends on your device), compared to the iOS updates from years past that measured over 4.5 GB. This is good news too for those that don’t have much free space on their iPad, eliminating the need to temporarily delete apps or aviation chart databases to make room for the update.

Most of the headline-grabbing iOS 10 features focus on updates to the native Messages, Music, Photos, News and Maps apps. Beyond those enhancements, Apple added hundreds of improvements all throughout the interface to provide a much better user experience. Here’s a look at several of the more prominent changes that you’ll notice right away.

New screen unlock method–The first thing you’ll inevitably do after updating to iOS 10 is go to the lock screen and swipe from left to right to attempt to unlock the device, only to find that takes you to a new widgets screen (more on that later). To unlock the an iPad or iPhone on iOS 10 you now just need to press the home button a second time to reveal the home screen. The other big change here is that you’ll need to swipe from right to left to launch the camera app, instead of swiping up from the bottom. 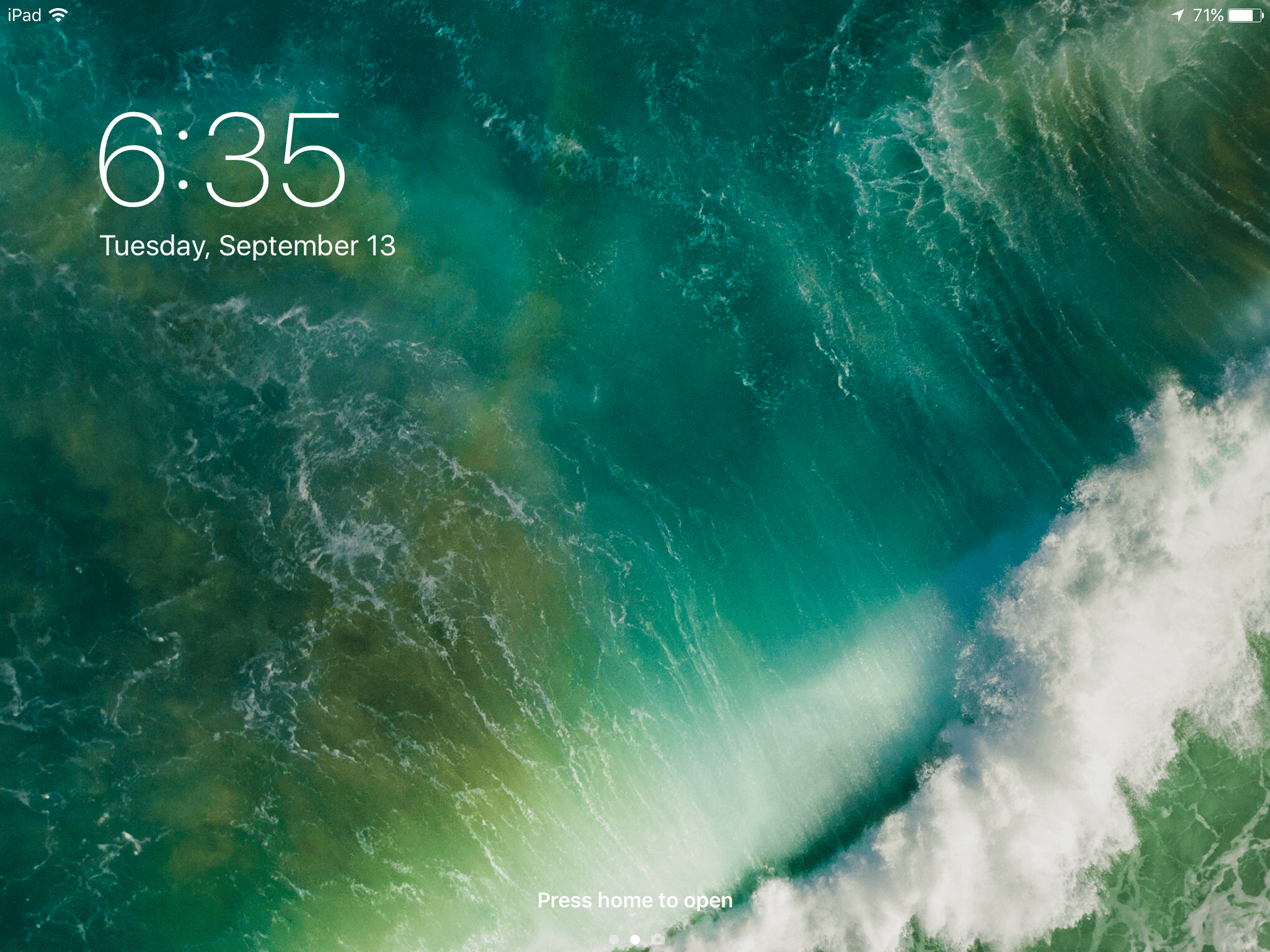 New Widgets screen–Apple added the concept of widgets to the iPad and iPhone several years ago in iOS 8, but their usefulness was often overlooked since they were buried in the Notification Center. They now have their own dedicated screen, accessed by swiping from left to right on either the lock or home screen on your device. While not all iOS apps offer widgets, we’ve found them useful over the past few years to display weather radar and quickly read the latest news headlines. 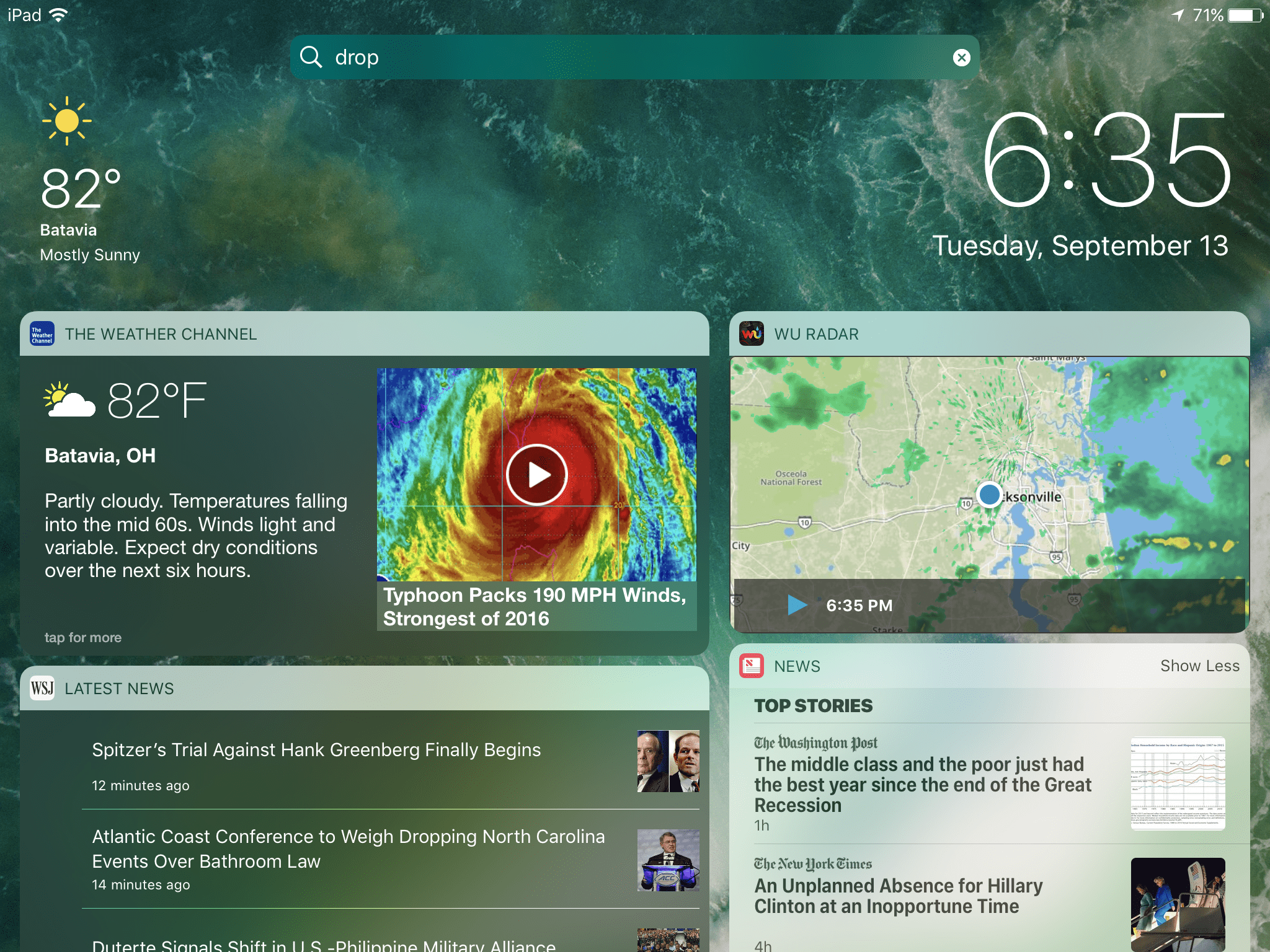 Updated control panel layout–The control panel, which is accessed by sliding your finger up from the bottom of the screen, received a minor makeover in iOS 10. It now includes 2 separate screens to better organize the controls. The first screen includes the familiar buttons to enable/disable WiFi, Bluetooth and other frequently-used settings, while the second screen includes media player controls. The best thing here is that the Airplane Mode, WiFi, Bluetooth, Do Not Disturb, Mute and Lock Rotation buttons show as bold new colors when activated, making it easier to see how everything is configured.

Remove native apps–iOS 10 allows you to remove many of the native apps like Apple Music, FaceTime and Podcasts from your device. Not only will it help declutter your home screen, but it can also free up some internal memory if you delete them all. And don’t worry, you can always go back to the app store to download them again if needed. 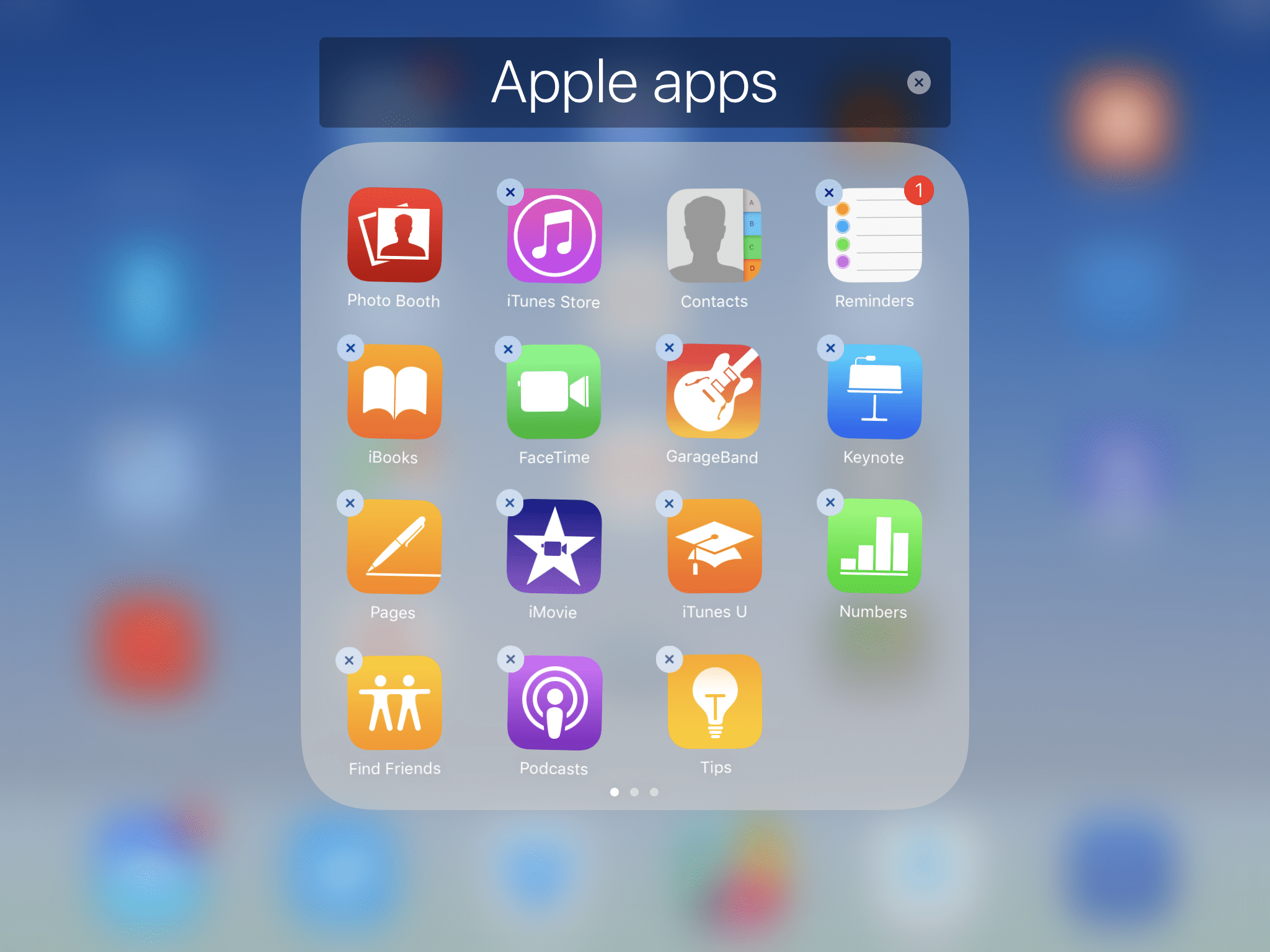 Multiple Safari tabs–iPad users can have multiple tabs open in the same view side-by-side in the Safari web browser. With at least 2 tabs open in Safari, press and hold on the name of one of them and drag it to either side of the screen, and release it once the main window shifts over. 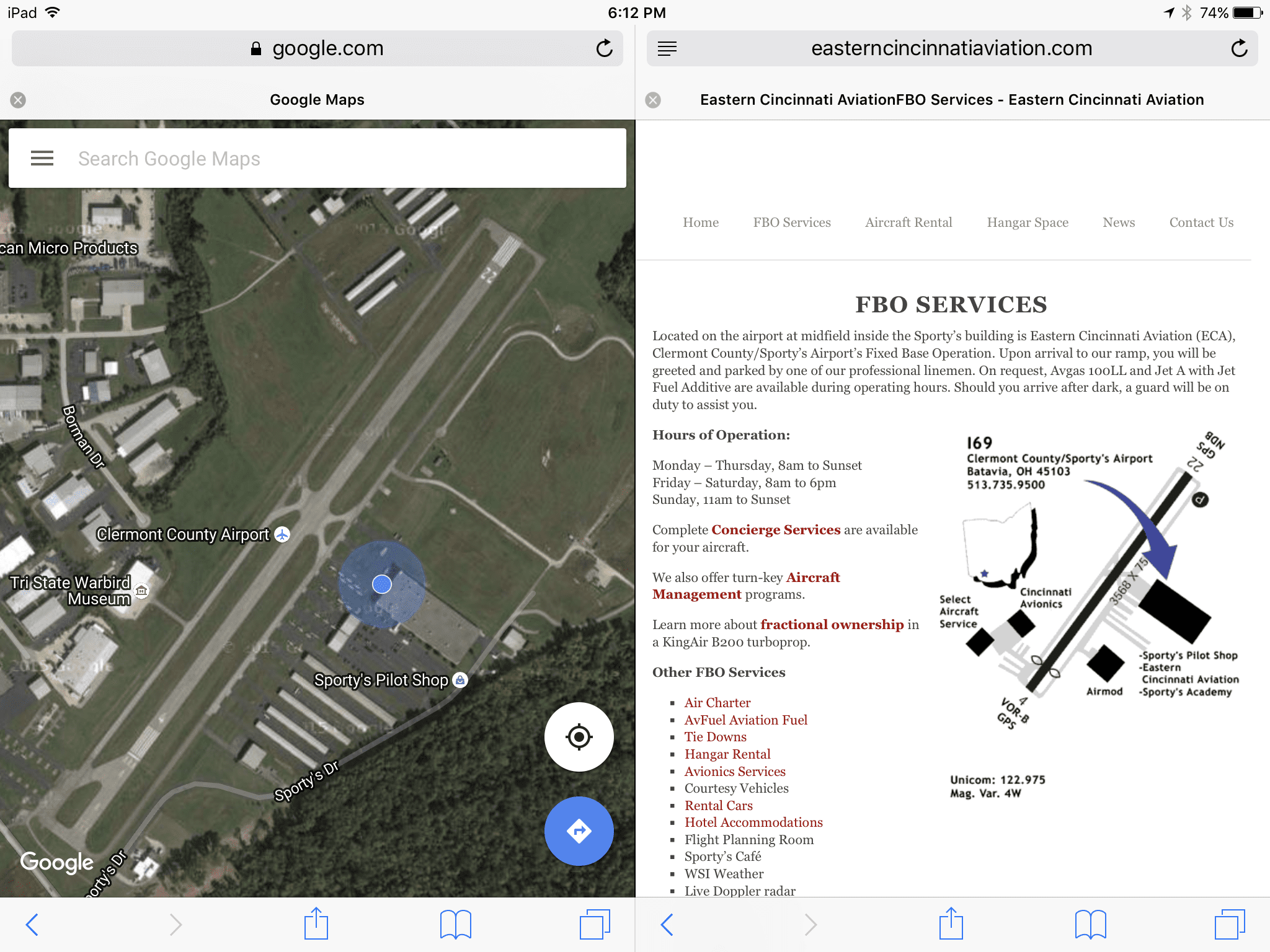 Where’s my car–For those that connect their iPhone to Bluetooth in their car or the Apple CarPlay system, iOS 10 now keeps track of where you parked your car and will display a notification to help you track it down when you return.