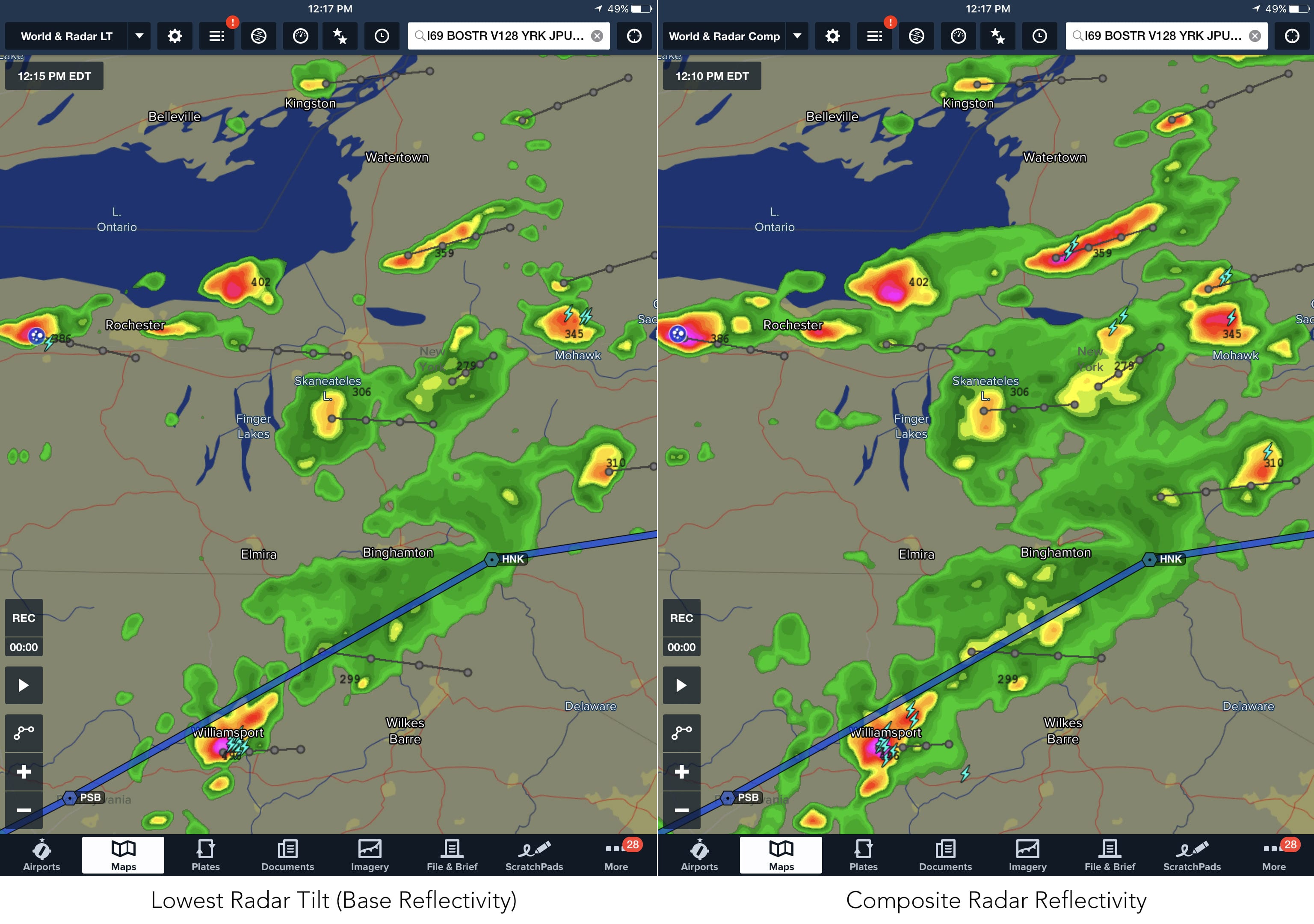 We’ve noticed a trend in recent years that most of the aviation EFB app developers release major updates in the weeks leading up to Oshkosh, allowing them to show off all the new features at their exhibits at the country’s biggest aviation event for pilots. ForeFlight didn’t disappoint again this year and just unveiled their mid-summer update, bringing some exciting new features to the app and refinements to existing ones.

ForeFlight got its start as an online preflight weather service for pilots, so it’s no surprise that they continue to improve and invest in the app’s weather offerings. This new release adds a second radar overlay option for the moving map called “Lowest Tilt,” which displays the low-elevation scan from a radar site, also known as base reflectivity. This gives pilots a different perspective when compared to ForeFlight’s existing radar layer, which provides a composite view of multiple angles of radar scans. 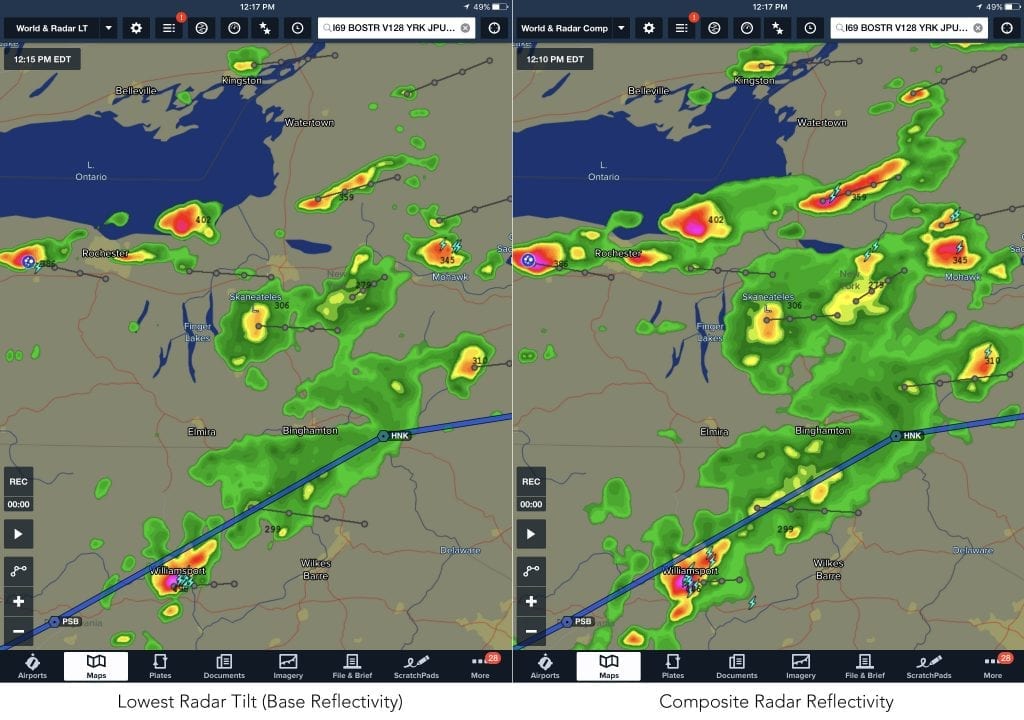 There’s also a new option located in the main map settings menu to switch the coloring of the radar imagery to the low resolution, 4-color scheme. This meets the specs defined by the Radio Technical Commission for Aeronautics as the standard for airborne radar coloring. It essentially allows you to view the precipitation returns using the same intensity scales as those found on onboard aircraft weather radar systems. 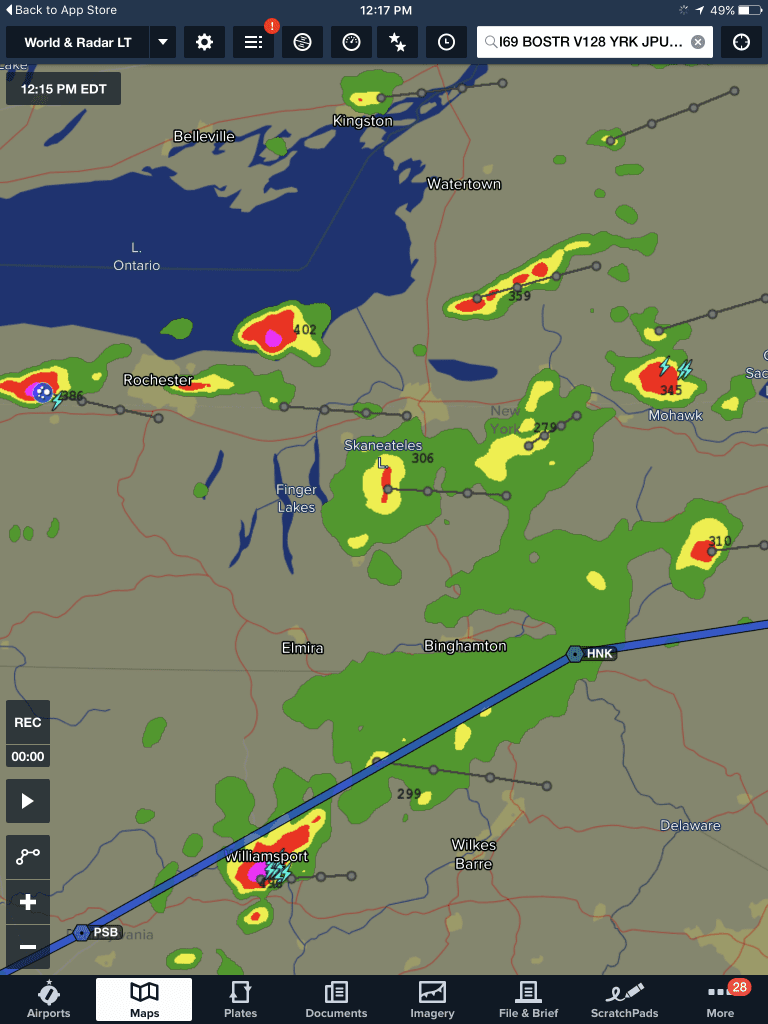 ForeFlight made one other small weather-related change as a part of this update. The Lightning layer no longer declutters groups of lightning strikes, allowing you to see all the strikes in a given area to get a better sense of where dangerous convection is occurring in a storm.

Bundled with ForeFlight 7.7 is a firmware upgrade for Stratus 1S and 2S receivers. This upgrade adds support for the Stratus ESG, Appareo’s new all-in-one ADS-B Out solution. Stratus 1S and 2S devices can connect to the Stratus ESG via a USB cable to take advantage of its auxiliary power for continual charging, as well as the transponder’s externally mounted WAAS GPS and ADS-B antennas for maximum reception. 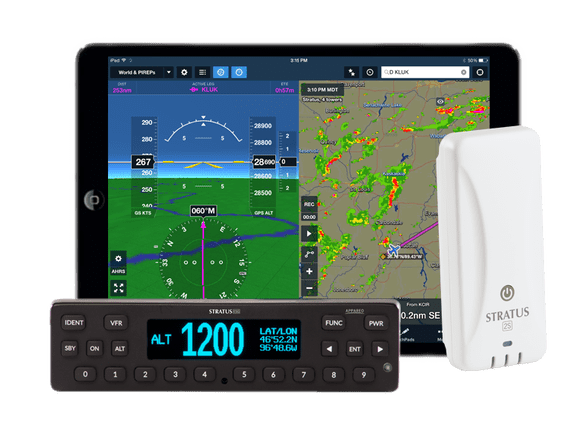 The upgrade also adds new features to the Stratus 2S. The built-in Flight Data Recorder now has automatic flight leg detection which automatically stops a Stratus Track Log and starts a new one when a full landing is detected. In addition, customers have the option to save AHRS calibration settings between uses – this is especially helpful for taildragger aircraft pilots who set ‘straight and level’ attitude while inflight.

Additional new features in the update

New flight instrument–ForeFlight 7.7 includes a new instrument option at the bottom of the maps view called Descent to Destination. This uses your GPS ground speed, GPS altitude, and distance to destination to compute the required rate of descent in feet per minute to be at your destination elevation upon arrival. 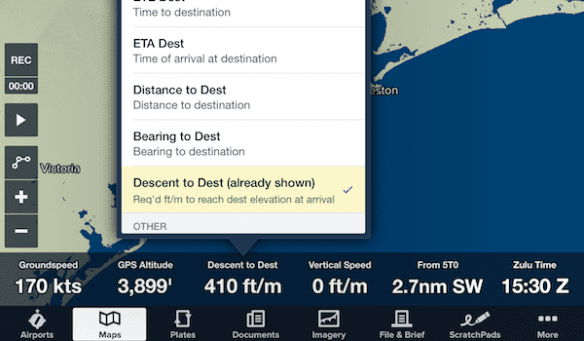 Logbook flight sharing–pilots who use the Logbook feature in ForeFlight now have the ability to send the final log data from a particular flight directly to another ForeFlight user. The recipient will receive a notification in their ForeFlight app, with the option to approve and save it in their logbook. This is useful for student pilots and CFIs flying together, or for 2-pilot crews to save time on routine flight logging.

Military flight bag download improvements–Military customers have the option of downloading new charts and databases from a wired internet connection, useful in locations where high-speed wireless internet isn’t an option.

The last big thing in ForeFlight 7.7 is one that you might not notice right away, but opens the door to significant functionality down the road. The app is using an all new map engine that is much faster and delivers “blazing speed”, according to ForeFlight CEO Tyson Weihs. He recently teased about bigger things on the horizon on twitter:

Customers raving about the blazing speed of the all-new, home-grown @ForeFlight Map Engine in 7.7. Can't wait to show what's next. #OSH16

Check out the latest version of ForeFlight here on the app store.