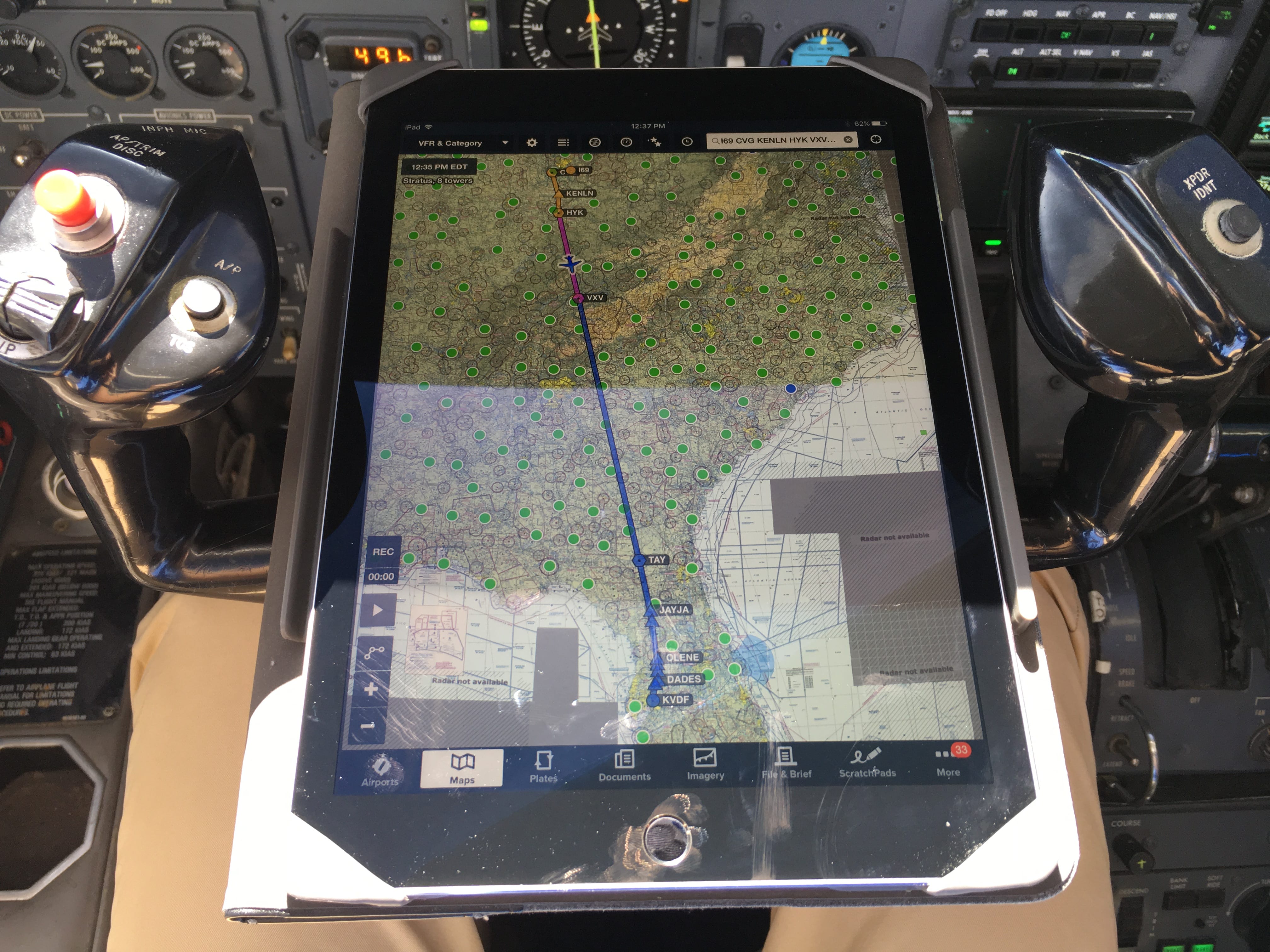 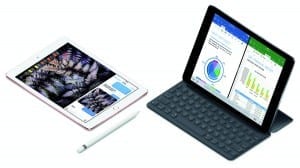 Apple released a new 13″ iPad Pro model last fall, designed to be the everyday powerhouse computer for creative professionals and those that rely on the iPad’s touchscreen interface. This was Apple’s answer to the Microsoft Surface tablet, and included the option to use Apple’s new keyboard and Apple Pencil for increased productivity.

We flew with the 13″ iPad back in November, and while it was more than capable on the hardware side, we found it to be too big for most airplane cockpits. Not long after, Apple followed up with the announcement of the smaller 9.7″ iPad Pro, which is essentially the next generation iPad Air 2. We took it flying down to Sun ‘n Fun last week, and wow were we impressed.

Let’s first take a look at what’s new in the 9.7″ iPad Pro and how it compares to the previous generation iPad Air 2: 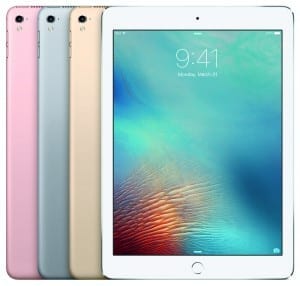 Design: At first glance the iPad Pro looks identical to the iPad Air 2, and has virtually the same dimensions and weight. If you look closer, you’ll notice the iPad Pro adds 2 additional speakers at the top of the device, a rear camera flash, a slightly larger camera lens and a new flush smart connector on the side for Apple’s keyboard.

Hardware: The iPad Pro uses Apple’s new A9X processor (same as the 13″ Pro), a nice upgrade over the A8X in the iPad Air 2. This is noticeably faster, and leads to virtually no delay when working with applications on the device. There are larger internal storage options available, though this comes with a price: you can choose between 32GB, 128GB or 256 GB. And like with all other model iPads, a WiFi+Cellular option is available, which continues to include the internal GPS.

Display: While the resolution of the device remains the same at a crisp 2048 x 1536 pixels, it’s the improved anti-reflective properties that make this model really stand out. Compared to the iPad Air 2, the iPad Pro’s Retina display is 25 percent brighter and 40 percent less reflective (more on this in a minute). Like the iPad Air 2, the iPad Pro model also supports split-screen multitasking, allowing you to run 2 compatible apps side-by-side on the screen.

Camera: The rear camera on the iPad Pro was upgraded to essentially the same specs as the iPhone 6S. It includes a 12 megapixel sensor and can record 4K videos–pretty nice when you want to take a high-quality picture or video from the cockpit.

Our speculation last month was that the iPad Pro would be the best iPad for pilots yet. Fortunately we were able to get our hands on one on the launch date to see if it lived up the hype. We spent most of last week flying with it on various missions, including a trip down and back to Sun n’ Fun in Lakeland, FL. One word to sum up our experience? Wow.

Given that this is really the “iPad 7” if you count each upgrade over the years, we’ve started to take for granted the upgraded processor in each new model. Yes it’s as fast as ever and makes it a joy to use with advanced features like synthetic vision and ADS-B weather in ForeFlight, but at the same time the iPad Air 2 is no dog.

The real reason you’ll want to upgrade to the new iPad Pro is for the new display technology. The iPad Air 2 was the first to employ an anti-reflective screen, and this was a big improvement over all previous-generation iPads when it came to sunlight readability. The iPad Pro steps up its game though, claiming to be 40% less reflective than the Air 2. They really nailed it this time. 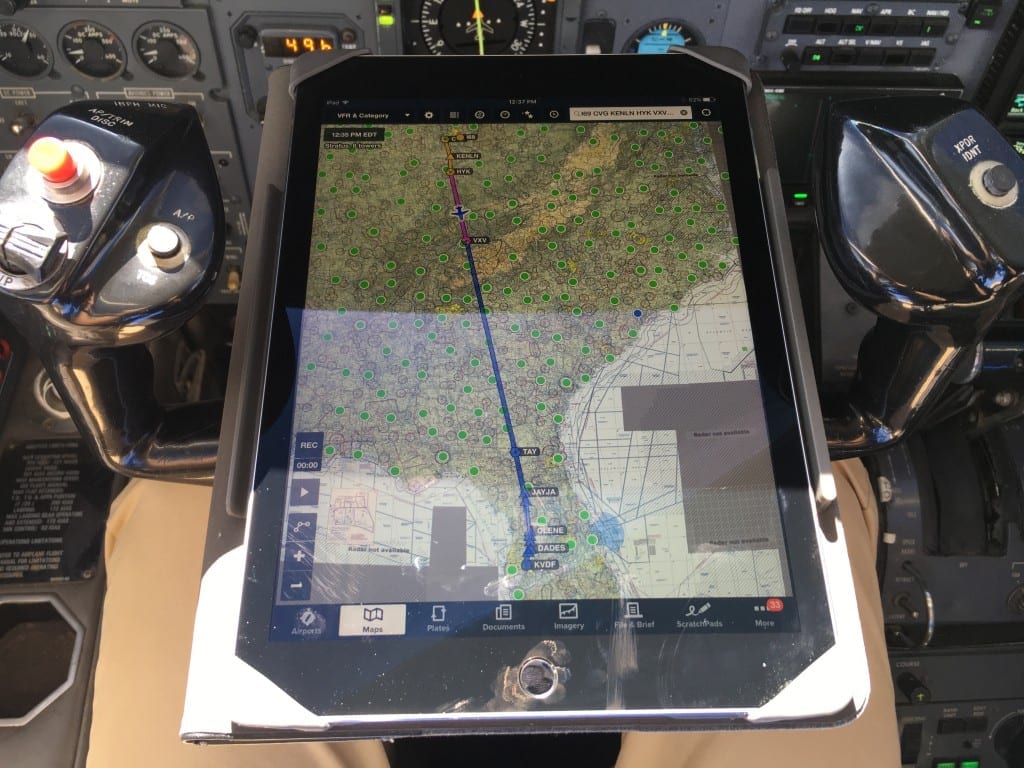 We tried the iPad out in 2 different low-wing airplanes last week, and found it to be very readable at just about all viewing angles in direct sunlight. Even when looking at a screen filled with fingerprint smudges and dust, we still couldn’t manage to take a “bad picture” of it to show any part of the screen washed out from the effects of the sun.

While we didn’t perform any scientific power tests, battery life appears to be comparable to the iPad Air 2. Over the course of a 3 hour flight, using ForeFlight and a Stratus 2S ADS-B receiver, the iPad Pro battery dropped down about 46%. Screen brightness was set around 75%. 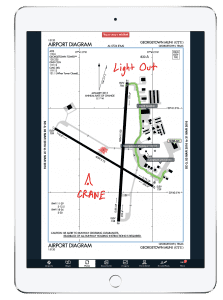 The other feature some pilots will really like is the compatibility with Apple Pencil. This $100 accessory allows you to take precise and accurate notes on the screen, in the ForeFlight scratchpad for example.

Because the Pencil is built specifically for the Pro, there is virtually no lag when jotting down notes, and allows you to rest your hand on the screen without affecting your writing ability. We found this very useful for writing down clearances, and making annotations on approach charts and taxi diagrams in the Plates section of the app.

Because the dimensions are nearly identical and all the buttons are in the same location, most iPad Air kneeboards and mounts will work just fine with the iPad Pro. We tried it out in the form-fitting Ram Mount iPad Air cradle, and observed just a small bit of play in the fit. It works just fine, but something to be aware of.

So now the ultimate question–should you upgrade? Based on our experience, pilots flying with an iPad Air or older should definitely give this some consideration, especially if sunlight readability in the cockpit has been an issue. Pilots flying with an iPad 4 or older will also notice a remarkable speed improvement, thanks to the under-the-hood upgrades in the processor over the years.

From a storage size standpoint, we recommend the 128GB model at this time. You could get by with 32GB, but we’re finding that the apps you’re most likely using outside of your main aviation app continue to get larger and need room to grow. We also maintain our recommendation to stick with the WiFi only model (unless you plan to use the Verizon or AT&T cellular data), and purchase a GPS or ADS-B receiver for position data.

Finally we’ll point out that Apple also dropped the price of the iPad Air 2 down to $499 for the 64GB model. This is an excellent value for those on a budget who are looking to upgrade from one of the original iPads, to benefit from a much faster processor and lots of storage space for charts and apps.

How to use ForeFlight’s weight and balance feature