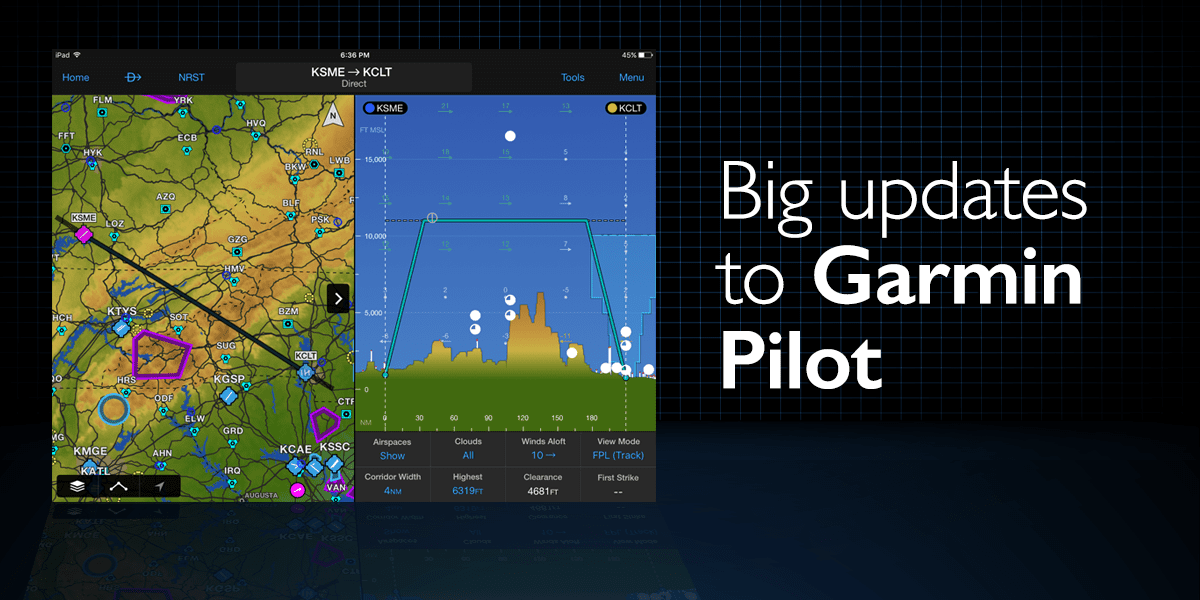 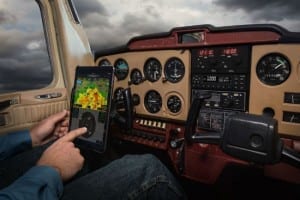 Garmin is charging full speed ahead into 2016 with big enhancements to both its ADS-B transponder and mobile app product lines. A few weeks ago they announced a new series of iPad-compatible ADS-B transponders, and now they’ve followed up with a big update to their iOS Pilot app.

The latest version of the app adds a wealth of new features, including a Flight Profile view, VFR charts for the UK, X-Plane flight simulator support, integration with the new GTX 345 ADS-B transponder and various trip-planning enhancements. Let’s take a look at what’s new here.

While the environment we fly in is inherently 3D, flight planning has been limited to a 2D world comprised of flattened charts, shaded terrain and textual weather reports. While these planning tools are more than effective, it leaves the pilot to visualize all the data to create a complete picture of potential weather hazards, airspace limitations and terrain or obstacle obstructions.

Garmin is aiming to simplify some of this with the introduction of a new Flight Profile view in the maps section of the app. This provides a vertical cross section display of airspace, terrain, obstacles and weather for your route,  useful during both the preflight planning process and when in the air.

To get started head over to the Maps section of the app. Tap the Menu button at the top right of the screen, and select the Flight Profile button under the Split Screen options. The flight profile will then display either at the bottom of the screen when in portrait mode, or on the right when viewing in the landscape orientation.

The profile is based on your active flight plan, with your departure airport on the left and destination on the right. Terrain is color-coded at the bottom of the profile, using the traditional green/yellow/red shading. If the selected altitude is too low for the route, potential impact points are shown with either obstacle or terrain symbols along the flight path. 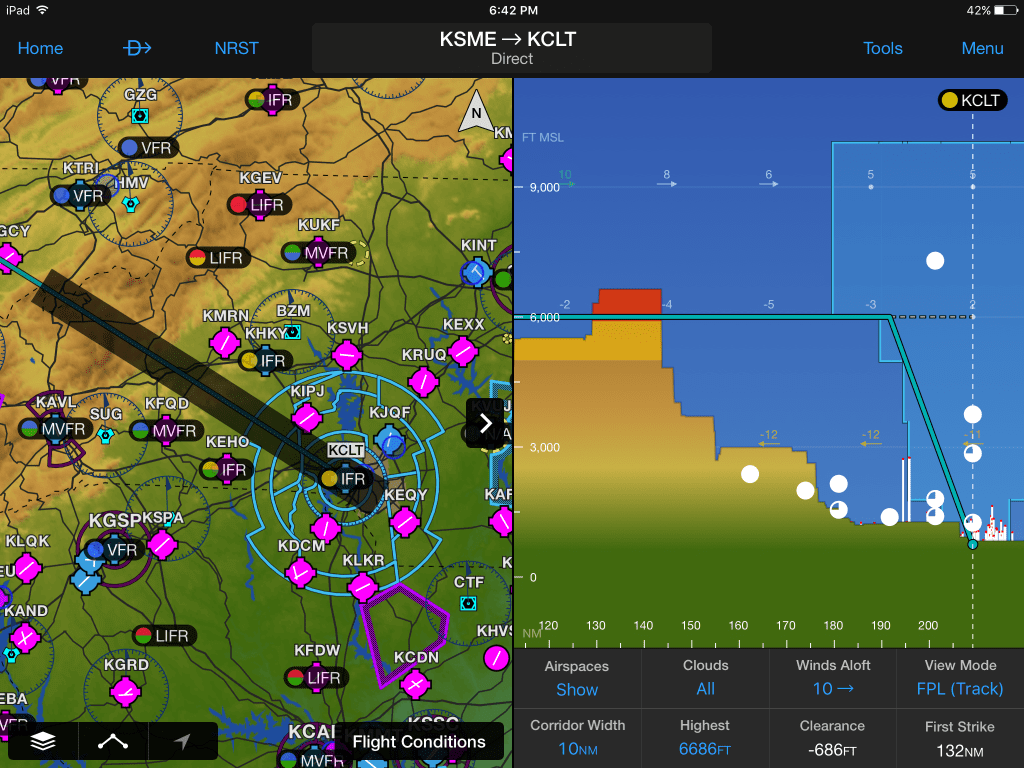 The two primary weather elements depicted are winds aloft and cloud height/coverage. Winds aloft are shown at 3,000′ intervals along your route and are color-coded at each reporting point based on whether its a headwind or tailwind. Unfortunately these don’t include the temperature aloft, which would be helpful to assess the freezing level.

Cloud coverage is shown based on METAR reports along your flight. The familiar pie-chart circle is used to depict the amount of cloud coverage, and at it is presented at the altitude for the lowest reported broken or overcast layer. You can then tap on the symbol to view a text report of all cloud layers observed at that site. 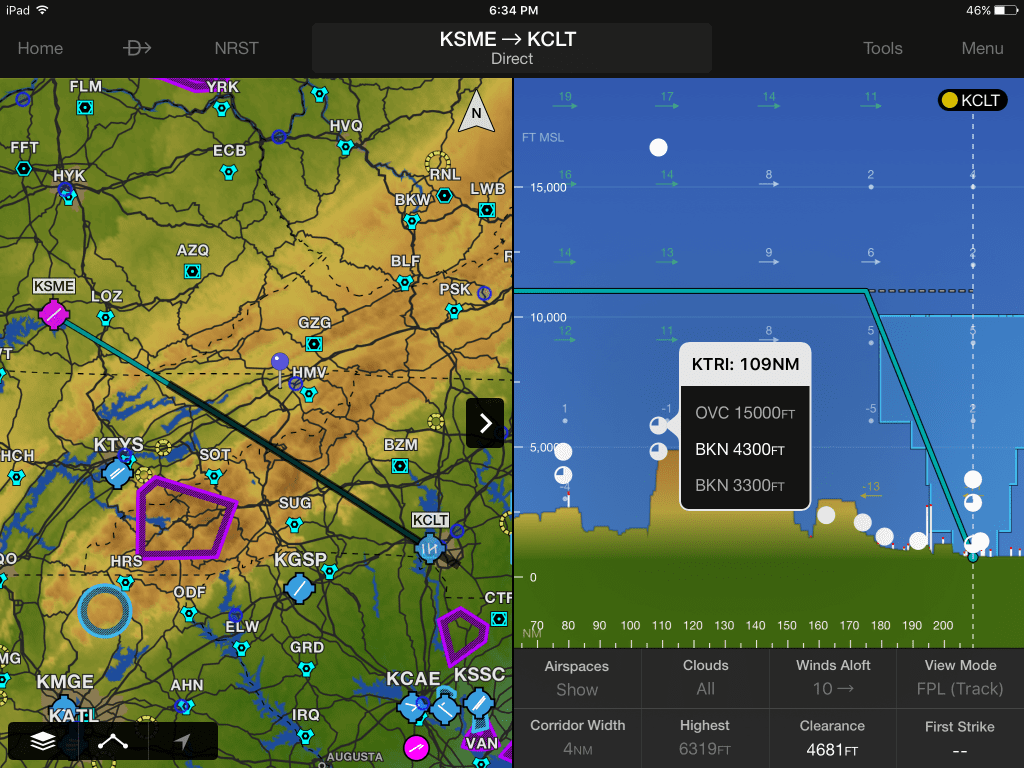 One of the unique features in Garmin’s profile view is the airspace depiction. This shows a vertical representation of all class B, C and D airspace on the route, along with MOAs, Restricted, Prohibited, Alert and Parachute jump zones. It’s also a helpful tool to use in the air since it will update the airspace ahead of you based on your current track. 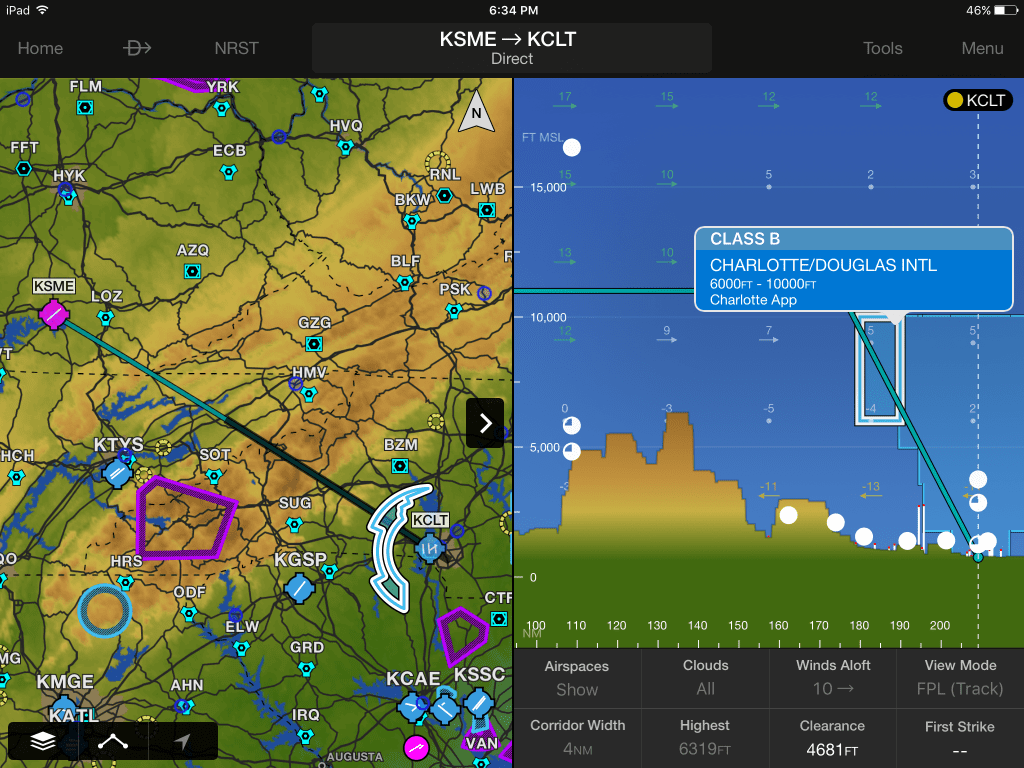 Garmin Pilot is now compatible with X-Plane 10 (or higher) Flight Simulator for home computers. This long-awaited feature allows you to send the GPS position and AHRS data from the flight sim right to the app on your iPad and fly it from the comfort of your home. This is a great way to practice using Garmin Pilot and explore some of the advanced features.

Here’s how to set it up: 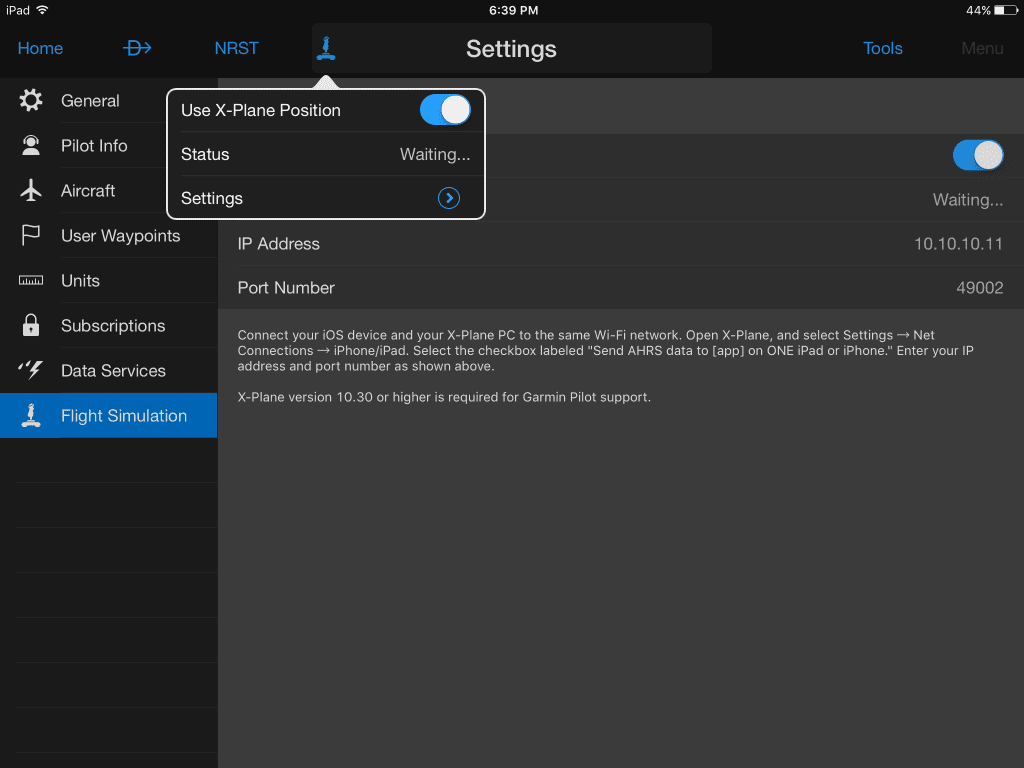 Garmin recently announced the GTX 345 all-in-one ADS-B transponder, which meets the year 2020 requirement by incorporating 1090ES out. A unique feature in this transponder is that it also includes a dual-link ADS-B In receiver, and the ability to send this data wirelessly to an iPad over Bluetooth in the airplane. The Garmin Pilot app is now fully compatible with the GTX 345, allowing you to receive the following data from the transponder: 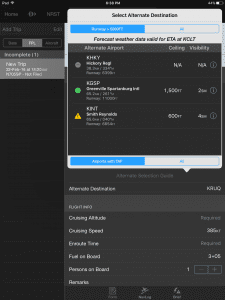 Garmin Pilot is available in the app store and includes a 30-day free trial.