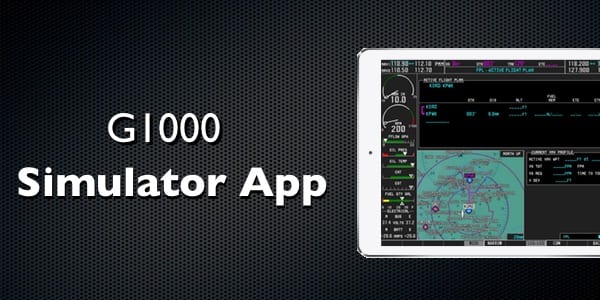 The Garmin G1000 (general aviation’s most popular glass cockpit by far) is almost 12 years old now, and yet for thousands of pilots every year it is new territory. Transitioning to the G1000 isn’t necessarily hard, but it does require some study and practice before blasting off into busy airspace. A little time spent on the ground can really pay off.

There are a number of training resources available to pilots, including a variety of training manuals from Garmin and a fairly comprehensive training course from Sporty’s that includes a desktop simulator program. But sometimes all you need is a basic simulator on your iPad that allows you to push buttons and turn (simulated) knobs, without all the guided lessons and scenarios. This is especially true for maintaining currency, since a quick session on the tablet that’s always with you can be easier than sitting down at a computer.

To fill this need, we’ve recently been using two apps from Simionic, a small company that’s more for simulator enthusiasts than Cirrus or Cessna pilots. While the apps are basic, they are affordable, easy-to-use and quite representative of the actual avionics. Just open the app and start flying.

The G1000 simulator is actually two apps, one for the Primary Flight Display (PFD) and one for the Multi-function Display (MFD). This is handy for focusing on one screen at a time, although the app does allow you to pair two apps together on two separate iPads. As long as both iPads are on the same WiFi network, you can have a two screen (PFD and MFD) setup and do some pretty realistic training.

The app can be used in full-screen mode, so the tapes and numbers are as large as possible, but the soft key indications can still be tapped on for practice. We liked this option on an iPad Mini. By contrast, on an iPad Air or Pro, you can tap the top left of the screen to show the bezel keys and knobs.

You can “fly” the PFD app by tilting your iPad or swiping your finger on the airspeed gauge. This allows you to watch indications change and even practice approaches. Also of note, the app does include full autopilot and flight director features for the GFC 700. Finally, you can use the app with Microsoft Flight Simulator X and X-Plane (again via WiFi) for even more sophisticated training.

Power users may be disappointed by some of the features that aren’t here. For example, there is no synthetic vision and the aircraft are limited to Cessna (172R, 172S, 182T and 206H). But given the price and ease of use, we think the apps are a great value.

You can download the apps in the iTunes App Store – one for the PFD and one for the MFD – both of which cost $9.99. A better idea is to buy the package deal and save 20%.