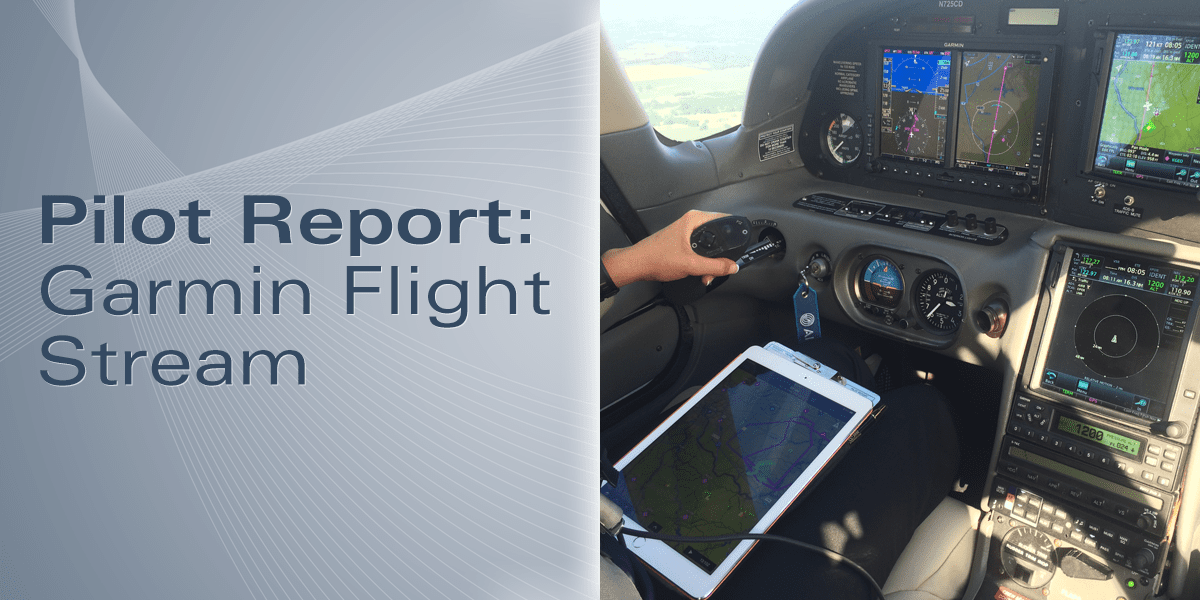 The iPad and its aviation support ecosystem are growing at an incredible pace. The current selection of aviation apps and GPS/ADS-B accessories available today exceed the capabilities of those found in all but the most sophisticated panel-mount avionics systems. The latest trend with the iPad in the cockpit is its ability to integrate directly with panel-mount avionics to create an even more powerful system. This, in turn, reduces pilot workload by keeping flight plans in sync on both systems; increases the reliability of GPS and ADS-B weather feeds since the iPad can tie into your airplane’s external antennas; and delivers pitch and bank information to your iPad from an AHRS permanently installed in your airplane. 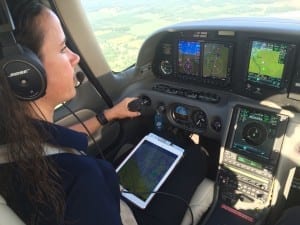 Garmin’s Flight Stream allows you to connect your iPad to the aircraft’s installed avionics.

The most capable of these systems, from a feature standpoint, is Garmin’s Connext, which adds wireless connectivity between select Garmin avionics and the Garmin Pilot app on iPad or iPhone. This system requires Garmin’s Flight Stream 210 module which serves as a wireless gateway and allows you to connect two mobile devices running the Garmin Pilot app over Bluetooth to compatible Garmin avionics. The Flight Stream 210 is an installed piece of hardware that your avionics technician will mount under the seat or behind the panel and is hardwired into your avionics system.

To take full advantage of the capabilities of Garmin Connext and the Flight Stream 210 system, you’ll also need a minimum of either a Garmin GNS 430W/530W or a GTN 650/750 navigator. With this basic setup you’ll be able to transfer flight plans between Garmin Pilot and your respective panel-mount GPS navigator. The Flight Stream 210 also contains an internal attitude sensor so it will deliver pitch and bank information to the Garmin Pilot app and drive both the backup instrument panel screen and the attitude display in the synthetic vision.

You can take Connext one step further and add a GDL 88 series transceiver which adds both the 2020 ADS-B Out compliance along with the ADS-B In capability, allowing you to receive the FAA’s free datalink weather and traffic information. The main benefit to the Connext system is that the Flight Stream will send the ADS-B traffic and weather automatically to the Garmin Pilot app on your iPad.

If you’re flying with a GDL-69/69A Sirius XM receiver, Flight Stream will also send this subscription-based datalink weather and music to the Garmin Pilot app. It’s worth noting that the Connext features are also included with the G3X Touch system for experimental airplanes and can make use of a GDL-39R ADS-B transceiver to send the weather and traffic data to your iPad.

The Garmin Connext concept and Flight Stream hardware debuted at Oshkosh last year,and on paper, it sounds like a pilot’s dream. We finally received an opportunity to fly with the system last week in a 2001 Cirrus SR-22 outfitted with the best avionics Garmin has to offer. This particular model had a G500 glass cockpit display, dual GTN750 GPS navigators, a GDL 88 ADS-B transceiver and a GDL 69 SiriusXM receiver. 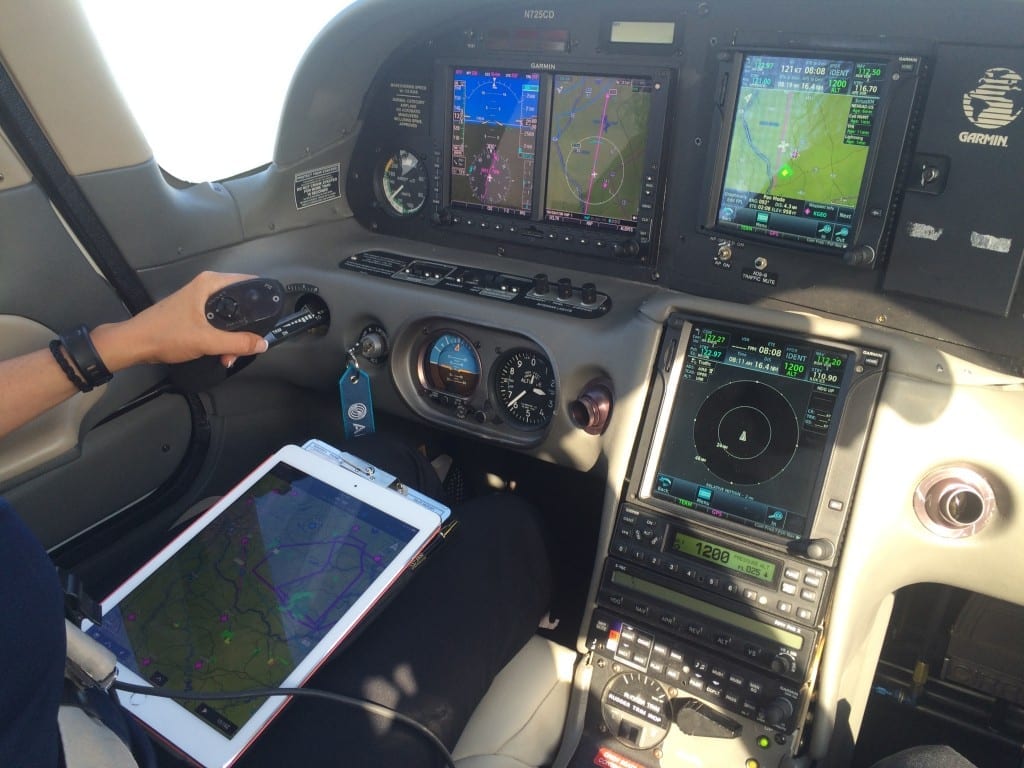 Before arriving at the airport, we used the Garmin Pilot iPad app to plan an IFR flight. A feature we use frequently when planning a flight in unfamiliar airspace is the Routing tool in the Flight Plan section of the app. This allows you to view routes planned by ATC for past flights and sort them by popularity. 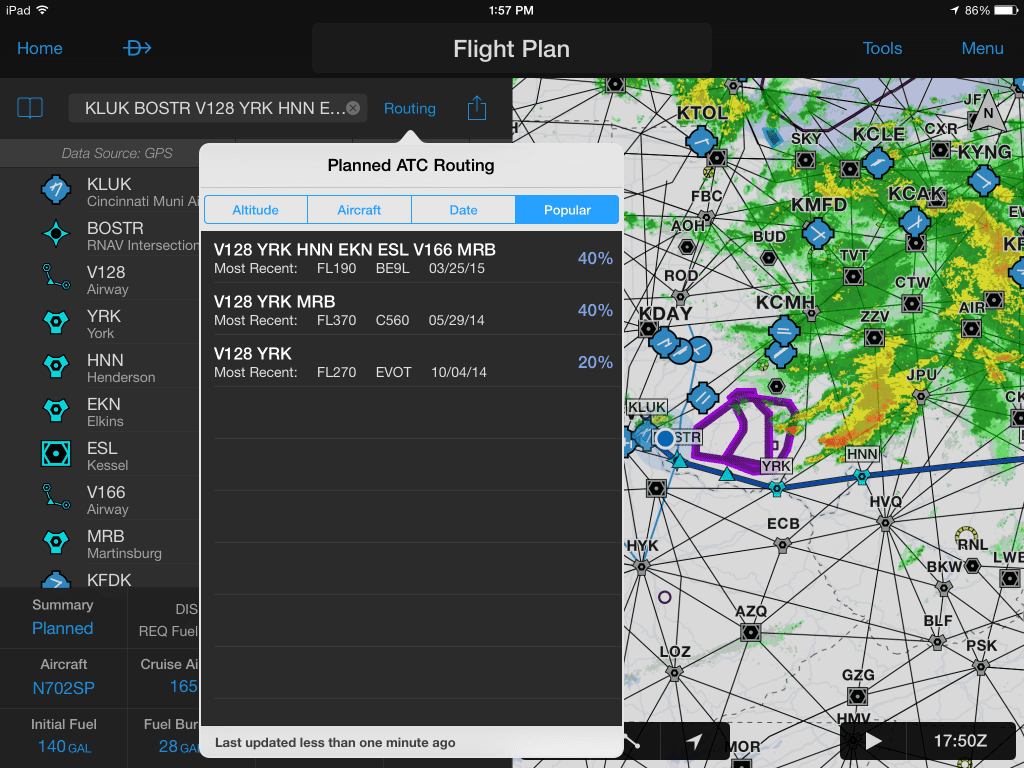 You then tap the route you like and it’s instantly added to your active flight plan in the app. From here it’s a good idea to save this flight plan in the app which is accomplished with the “book” icon next to the box where you enter the waypoints. It now takes only a few more taps to file the IFR flight plan using the File & Brief tool.

When it comes time to head out to the airplane and go flying, the Flight Stream system powers up as soon as you turn on the avionics. If this is the first time flying with the system, you’ll need to go through the traditional steps of pairing the iPad via Bluetooth. If you’ve already accomplished this step on a previous flight, you can enable “Auto Reconnect” from the GTN750 settings page which will make the connection automatically each time you go flying. You can connect two devices simultaneously. 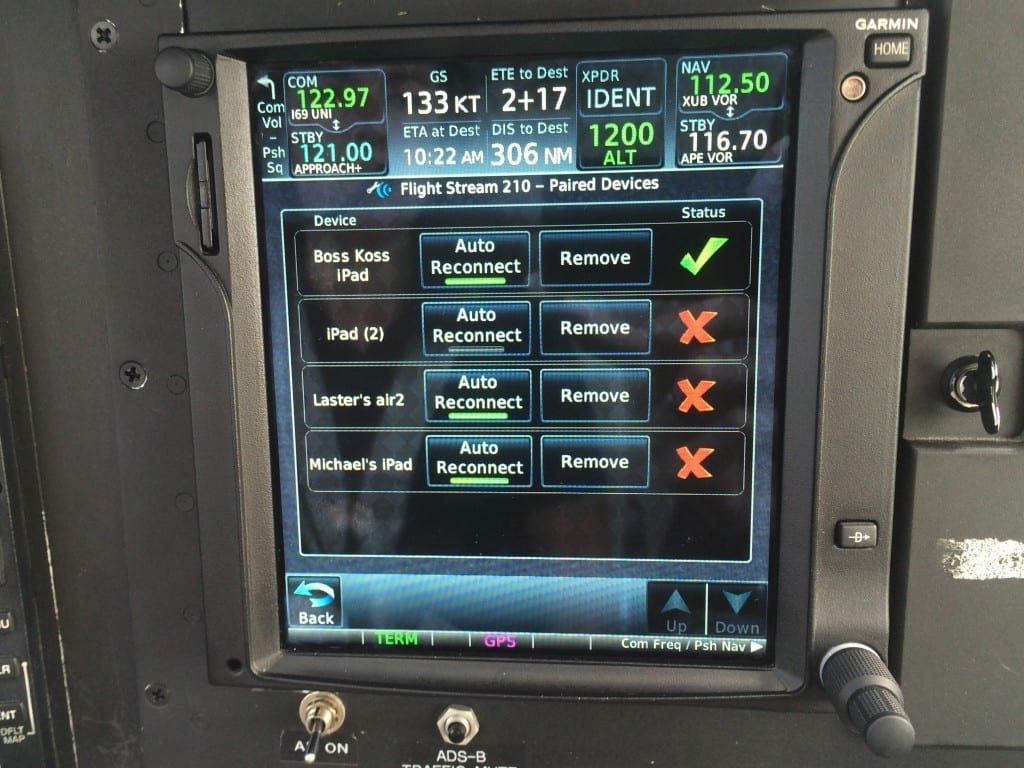 The next step is to transfer your flight plan from the iPad to the GTN750. This is accomplished by pressing the blue Connext button on the map page which displays a drop-down menu. Tap the “Send To” arrow in the Flight Plan Transfer section and it will be sent to the GTN750. 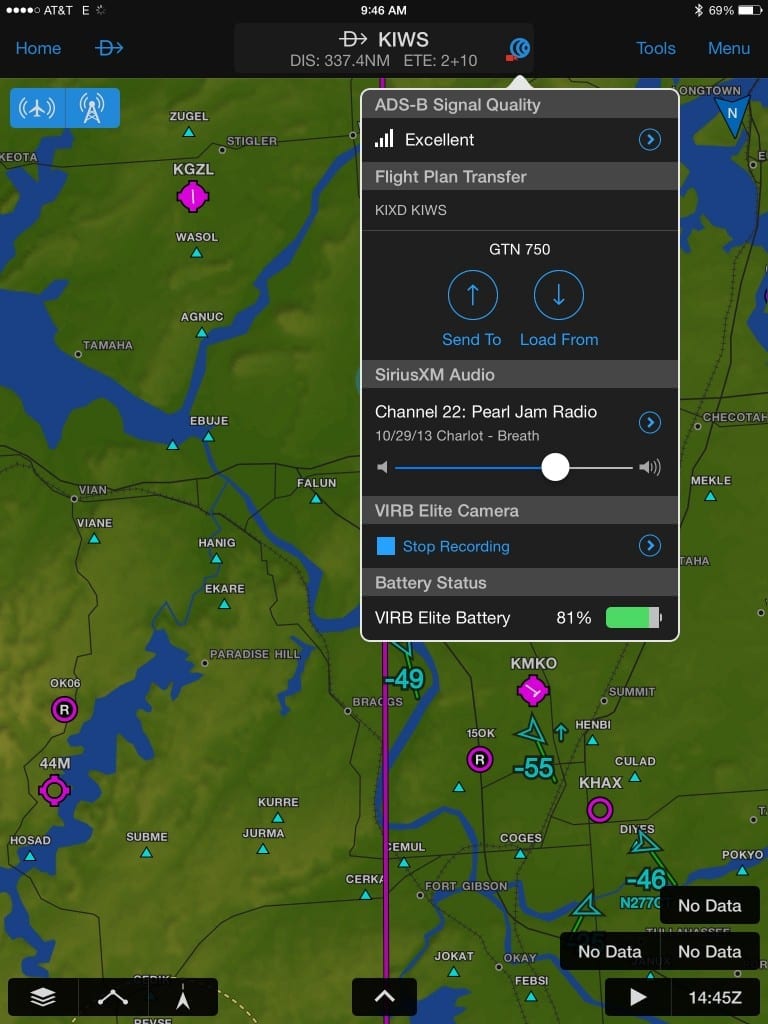 You’ll then see the MSG indicator flash on the GTN750 with the alert “New imported flight plan available for preview.” 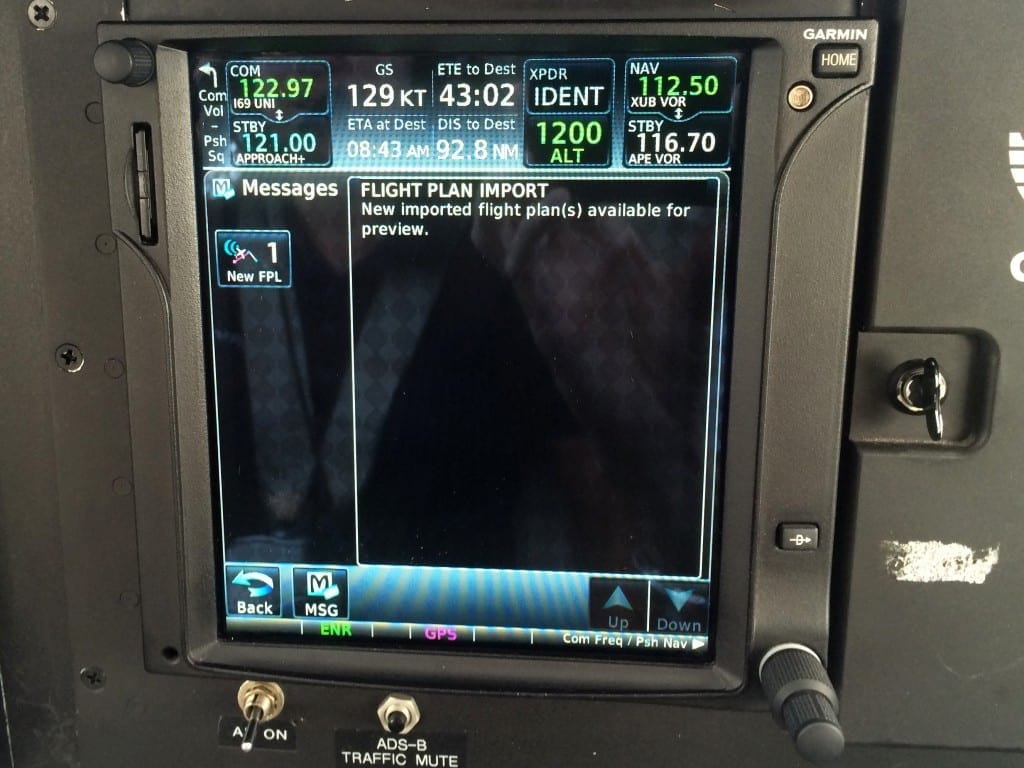 Press the New FPL button on the panel-mount GPS and then “Activate” to load the flight plan. While it would be nice if the flight plans synced without these extra steps, we’re not sure the FAA would approve without requiring some form of pilot acknowledgement. You can also send stored flight plans from the Connext section in the Garmin Pilot app saving some work for routes you fly frequently.

Now let’s say you’re en route and ATC clears you direct to the destination. You’ll probably find it easier to accomplish this task on the GTN750 since it only takes a few button pushes. The benefit here is that this new flight plan will automatically be sent to the Garmin Pilot app without requiring any steps from the pilot. 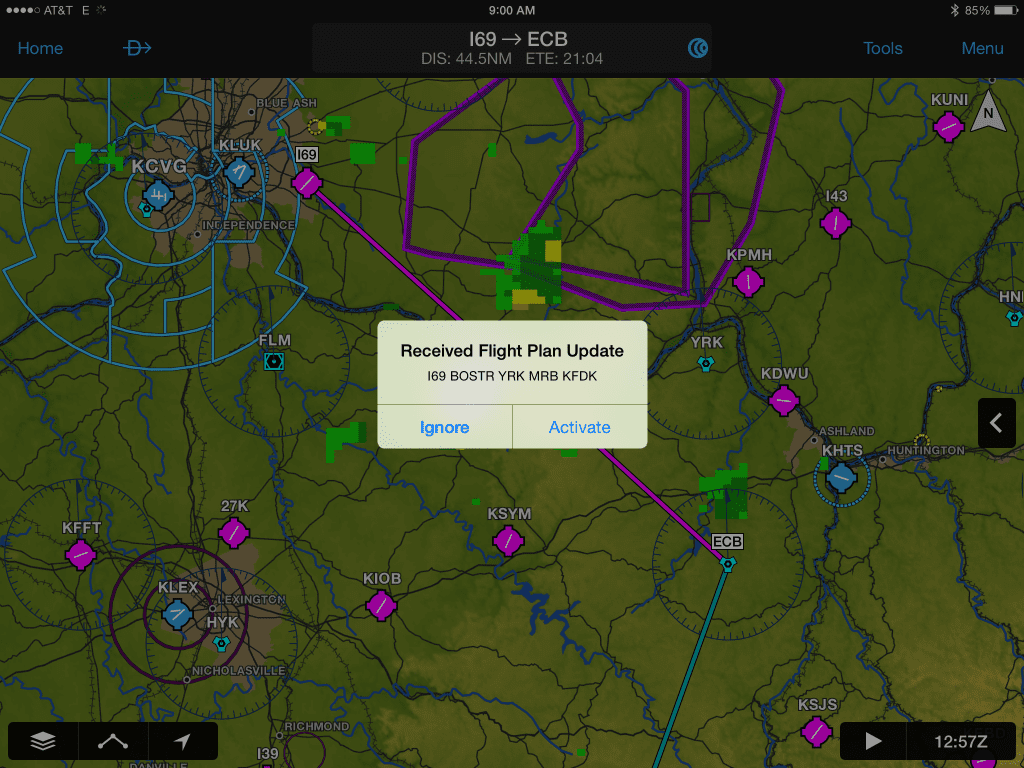 You can also configure this to have the Garmin Pilot app prompt you on the iPad before it updates the flight plan in the app.

Weather, traffic and attitude too

The next real benefit Flight Stream provides is wireless transmission of ADS-B weather and traffic data from the GDL 88 ADS-B transceiver to your iPad.

We were flying near busy Cincinnati, Class B airspace for this flight, immeidate after some rain showers passed so it provided a good opportunity to try this out. Because this connection is automatic, the iPad will start receiving weather and traffic as soon as you’re in range of an ADS-B tower. Up to this point, the only other option was to use Garmin’s portable GDL 39 ADS-B weather receiver to get weather on your iPad and the Garmin Pilot app.

While both the portable GDL-39 and Flight Stream ultimately provide you the same data, you’ll really appreciate the increased ADS-B tower reception coming from the exterior antenna and not having the added task of keeping the portable receiver’s battery charged or plugged in to auxiliary power. 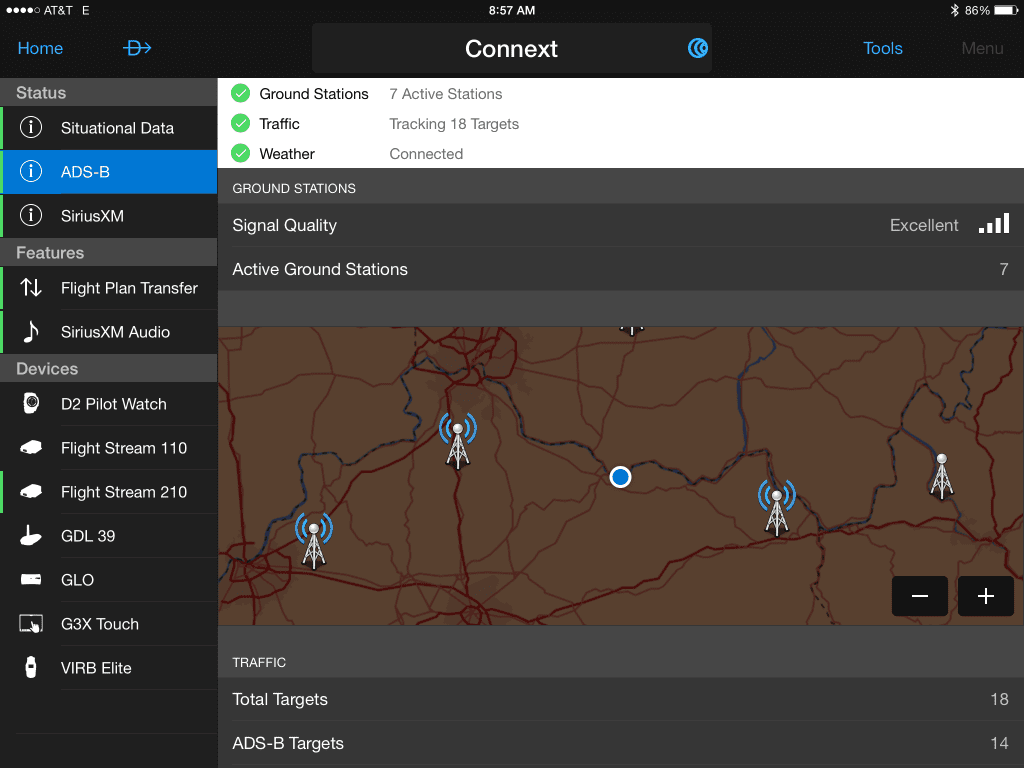 You can view full ADS-B status information in the Connext section of the Garmin Pilot app, including info on reception status, age of weather, and stats on nearby traffic targets. Garmin’s ADS-B traffic display system is by far the most robust of any of the aviation apps currently available, and it really excels when flying in an ADS-B Out airplane like this Cirrus. The pop-up traffic alerts provide exactly the information you’re looking for when another airplane gets too close. 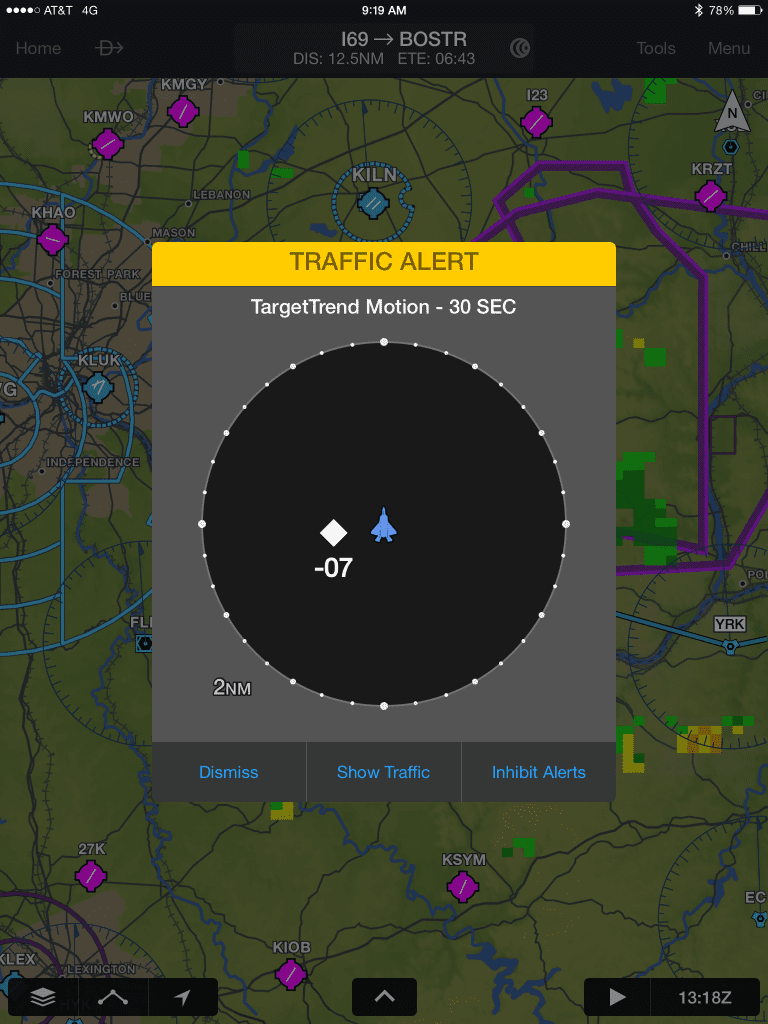 If you’re equipped with Garmin’s GDL-69 SiriusXM receiver, you can also display this satellite-based weather source on the Garmin Pilot app. A toggle on the moving map screen allows you to pick the source of the weather radar displayed if you have both systems installed. 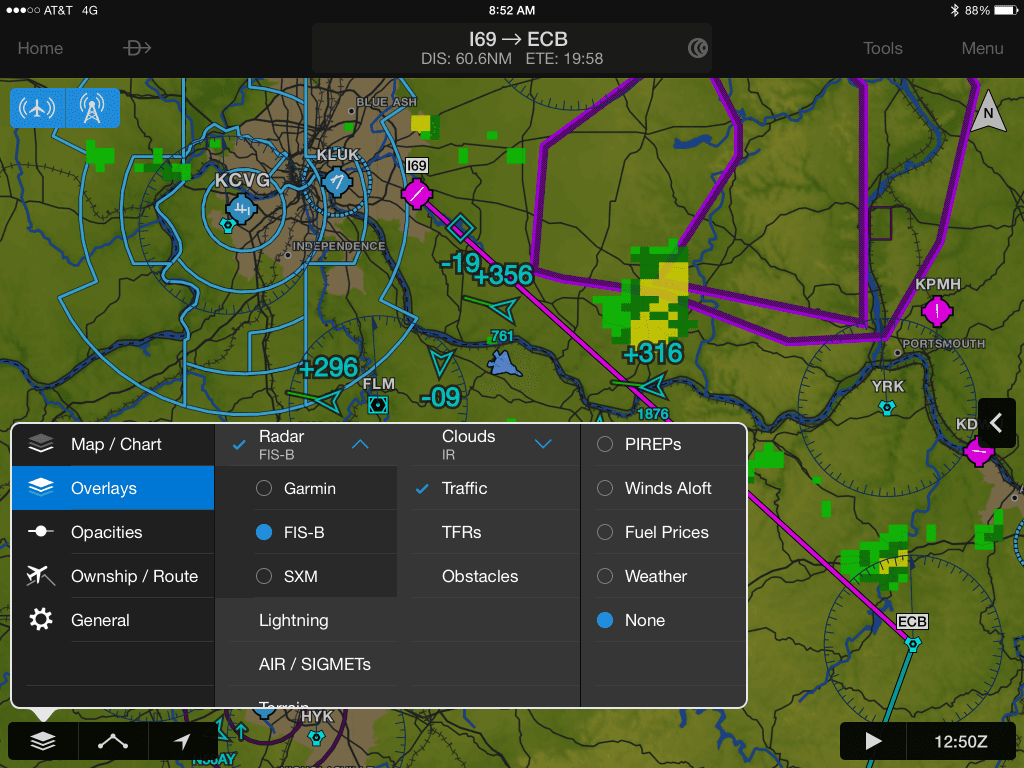 Pilots tend to favor the subscription-free ADS-B weather more and more these days, but many will still find the SiriusXM music features appealing. This too is integrated in the Garmin Pilot app and allows you to control radio station and volume right from your iPad.

The last major feature of Flight Stream is its ability to send attitude data to your iPad from a self-contained AHRS. This could be a lifesaver if your primary attitude indicator failed in flight, allowing you to keep the wings level using the digital flight instruments right on the iPad. 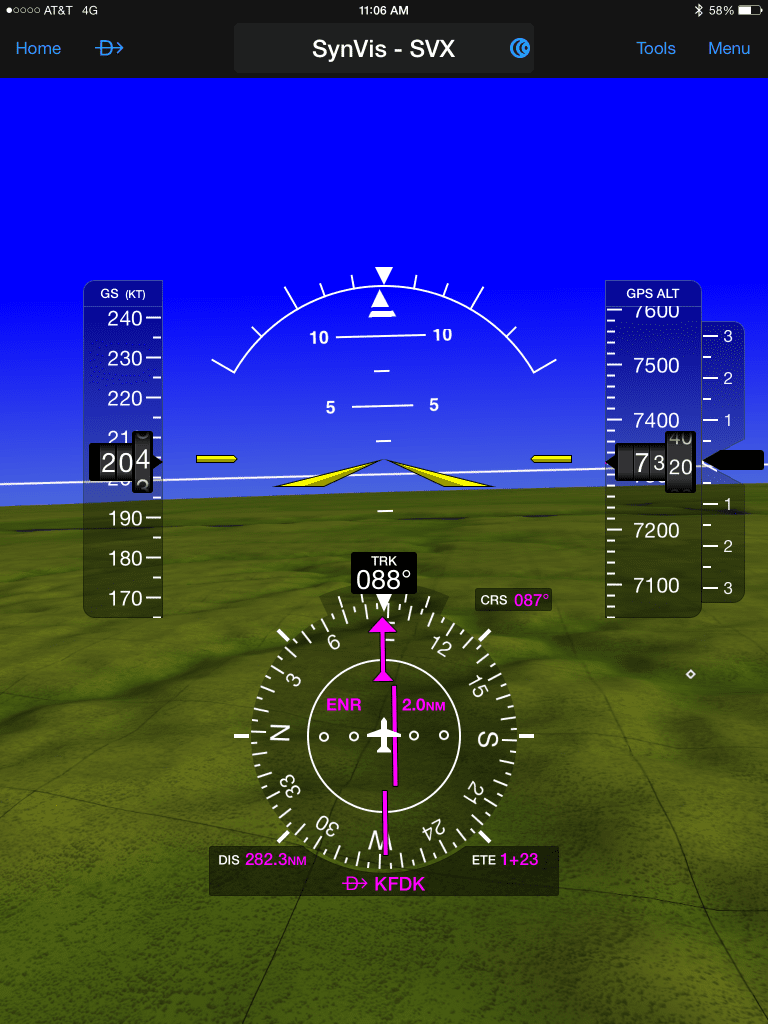 If you have a G500/G600, a future update will send attitude data directly from this system which is a higher-integrity attitude source. If that were to fail, the system would revert to using the attitude sensor in the Flight Stream and send that data to your iPad.

Garmin has a long-standing reputation for developing pilot-friendly avionics and Connext doesn’t disappoint. The standout feature is that everything just works. Once you pair your iPad to the system for the first time there is nothing else to do. There are no portable receivers to maintain or mounting hassles to deal with to get weather on your iPad.

Our most significant observation after flying hundreds of hours with the iPad and ADS-B weather is that no matter how big or fancy your GPS/MFD screen is in the panel, the iPad is consistently easier to use in flight to view datalink weather and make routing decisions when weather hazards get in your way. For this reason we found it especially helpful to research and plan re-routes using the touchscreen tools on the iPad in flight (rubber-banding, rulers, etc.), and then send it to the active flight plan in GTN750 when approved by ATC. And then when loading instrument approaches, or other procedures in the GTN750, it was nice to have the flight plan in the Garmin Pilot app always stay in sync.

The final observation is that this system requires some investment in the avionics in your airplane. If you’re looking for a basic, low-cost ADS-B out system, there are obviously less expensive alternatives. But at the same time, they also won’t provide the bells and whistles of Garmin Connext. And keep in mind this isn’t an all-or-nothing game–if you already own a Garmin 430W/530W or GTN series navigator, you only need to add the Flight Stream module which runs around $999 plus installation. You could then add the GDL-88 down the road to meet the 2020 ADS-B Out mandate with the added benefit of subscription-free weather and traffic data on your iPad.

We’d expect that Garmin’s Connext and Flight Stream products will continue to evolve over time and continue to add new capabilities. Each of these products, like their GPS counterparts, are upgradeable with software updates. By using an iPhone or iPad as the input and display device, the system becomes less dependent on installed avionics for control and much more expandable.

Quiz: how much do you know about ForeFlight?