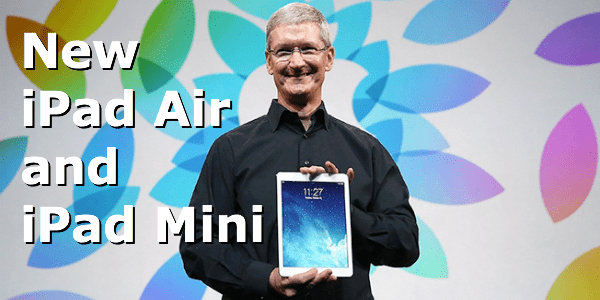 At an event yesterday, Apple introduced its much-anticipated 5th generation iPad and an updated iPad Mini. While most of the details had been leaked ahead of time, we’ll review what was announced–including some good news for pilots on a budget.

The new iPad is called the iPad Air, playing off the MacBook Air name the company has used successfully for its line of super-slim laptops (although we suspect a few pilots will call this the “iPad 5″). It’s the thinnest and lightest 10″ tablet you can buy, weighing just 1 pound. That’s an impressive feat, and should be welcome in the cockpit, but the bigger new is that the iPad Air includes Apple’s new, 64-bit A7 processor. This is the same chip that powers the new iPhone 5S, which is noticeably faster than any iPhone before. We expect this new processor (and its complement, the M7 motion processor) will unlock some interesting features in aviation apps down the road.

The iPad Mini upgrade may be even more important for pilots. Over the past year, the 7” iPad has become increasingly popular with pilots for its compact size and low weight. But it lacked the high-resolution Retina display that has been available on the larger iPad for a while. That’s now changed, as the latest iPad Mini includes the Retina display and the A7 processor–and it still starts at $399. With these latest upgrades, the iPad Mini and the iPad Air are essentially the same tablet, with similar styling, the same screen resolution and the same processor. You simply choose the size.

One final piece of news we didn’t expect is good for pilots on a budget: the iPad 2 and the original iPad Mini will still be available, starting at $399 and $299, respectively. These may not be the latest and greatest, but they’re perfectly good for flying, and they represent a great value. If you’re looking to get started with an iPad for less money, or if you need an inexpensive backup, we recommend these units.