ADS-B has become a household word among pilots over the last decade, especially with the popularity of devices like the Sentry, Stratus, and Garmin GDL receivers. While ADS-B weather is fairly well understood, ADS-B traffic is more complicated and there has been a great deal of confusion about when and how pilots can view this traffic information. In this article, we’ll try to explain in plain English what ADS-B traffic is, how to get it, and what the limitations are. 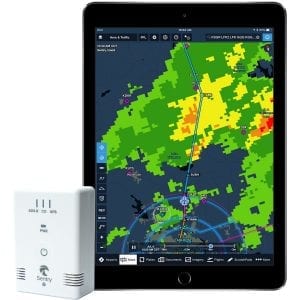 Portable receivers like Sentry make it easy to display ADS-B traffic (and weather) on your iPad.

The most important thing to understand is that ADS-B traffic is not like ADS-B weather. The weather product (technically FIS-B) is broadcast to anyone with a receiver—like an AM radio station. The only real limitation is that you must be in range of an ADS-B ground station. This is what some people call a “dumb transmission,” because you simply turn on the receiver and start receiving radar, METARs and TFRs. No additional equipment is required.

ADS-B traffic (called TIS-B), on the other hand, is very different—it is not broadcast to anyone and everyone. Instead, it is a “smart transmission,” meaning the ADS-B ground station sends a customized data package to a specific aircraft, and only in reply to an interrogation from specific types of panel-mount avionics. If you don’t have the right panel avionics, you probably won’t get reliable traffic. Instead of an AM radio, it’s a text message conversation.

Let’s quickly review the basics of ADS-B. This is (for our purposes, at least) a way to transmit information, and there are two parts of ADS-B: In and Out.

But there’s one more part to the ADS-B story. To avoid frequency overload, there are two frequencies that these ADS-B In/Out messages are transmitted on:

This means you can have multiple variations of ADS-B products: 978 In only, 978 In and Out, 1090ES Out only, etc. And while weather is only received on 978, traffic data is sent on both frequencies.

Enough technical jargon—let’s explain how to view traffic on your iPad.

Two ways to get traffic 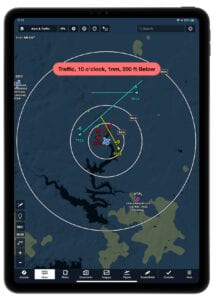 There are two basic ways to get ADS-B traffic with a portable ADS-B receiver—air-to-air and ground uplink. Air-to-air is straightforward: all airplanes equipped with ADS-B Out (so-called “participating aircraft”) will transmit their location, and the ADS-B receiver connected to your iPad will pick up these transmissions directly. Because almost all portable receivers are dual band (1090 and 978), they will receive all ADS-B Out transmissions from nearby aircraft. No ground stations ever come into play here.

But many airplanes are not equipped with ADS-B Out, so something has to be done to complete the traffic picture. This is where the ADS-B ground stations come into play. In addition to transmitting weather information (FIS-B), they can also send up traffic data (TIS-B). This traffic data includes all aircraft in radar contact—not just ADS-B Out aircraft.

Between the air-to-air traffic and the ground uplink traffic, you can get a very complete picture of traffic around you. Just like weather, you have to be in range of an ADS-B ground station to receive this data.

Unfortunately, it’s not that simple–you will only receive this TIS-B information if you are equipped with ADS-B Out. The FAA wants to encourage pilots to equip their airplane with ADS-B Out, so they’re requiring this equipment in order to receive traffic information. Many pilots think this is a bad idea, but regardless, it’s the way the system works right now.

All is not lost, though. If you do not have ADS-B Out, but you are flying near another airplane that is transmitting ADS-B Out, you can be a parasite. That is, you can listen in on that airplane’s traffic message and display nearby airplanes on your iPad. That’s because each ADS-B Out airplane receives back an ADS-B In traffic package from the ground stations, and it is specifically tailored to their location. In particular, that ADS-B Out airplane will see all traffic within a 15 mile radius and +/-3500 feet: 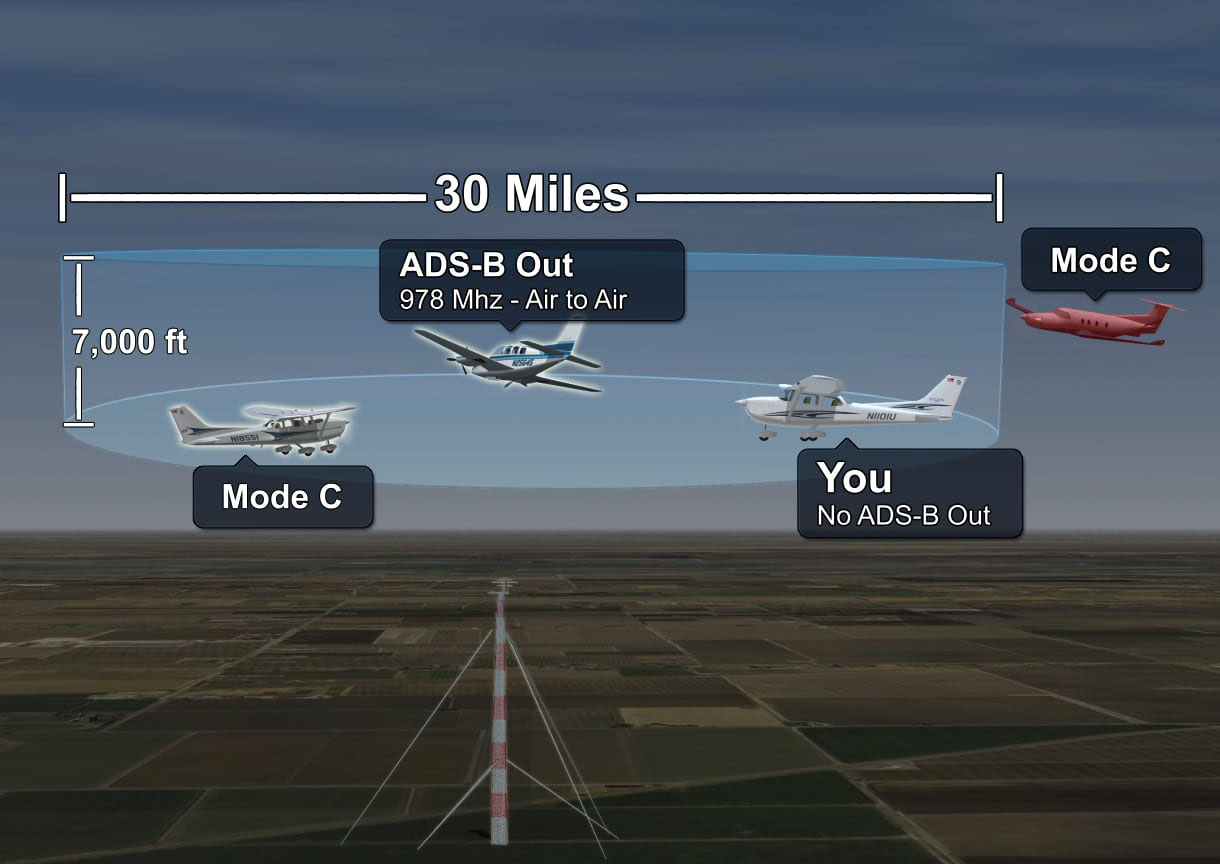 So if you’re flying in that “hockey puck” close to a participating airplane, you will have traffic uplinked from the ground, in addition to the air-to-air traffic. This is the best case scenario, as you have free traffic that rivals a $15,000 active traffic system. But as you can imagine, staying within 15 miles and 3500 feet of an ADS-B Out airplane can be a serious limitation. When you’re outside this hockey puck, you will only see air-to-air traffic, which is more limited.

Is TIS-B the same as Mode S Traffic?

No. Mode S traffic (sometimes called TIS-A) was popular in the early 2000s, with products like the Garmin GTX 330. This transponder received traffic information from terminal radar approach control, transmitted via Mode S. But the only traffic you receive with Mode S is the traffic in your local TRACON coverage area, and you only receive this information when you’re close to the TRACON. In addition, not all TRACONs support Mode S traffic.

TIS-B, on the other hand, does not depend on a TRACON. You see all traffic, even from en route radar facilities and TRACONs that do not support Mode S. In addition, the data is transmitted via ADS-B ground stations, not local TRACONs, so it is available over a much larger area of the country. 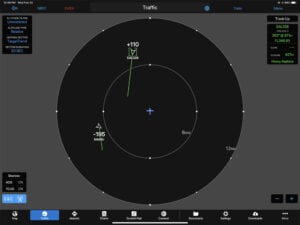 Garmin Pilot shows the source for each target: air-to-air or ground station.

There’s no doubt this subject is complicated. Here’s the one thing that is easy to remember: if you do not have ADS-B Out installed in your panel, you will not get reliable traffic on your iPad. That doesn’t mean it’s worthless, just incomplete. Most often, you’ll see lots of air-to-air ADS-B traffic, which includes a lot of high performance airplanes.

For those without ADS-B Out, the traffic feature is most useful in the terminal area, where airlines are coming in to land. There, you’ll see a lot of air-to-air ADS-B traffic, regardless of what ground stations are around. This is handy if you’re flying into a major airport. Since the 2020 mandate for airplanes to equip with ADS-B Out in order to fly in controlled airspace, tens of thousands of general aviation airplanes have added ADS-B Out. That means ADS-B traffic is much, much better than it used to be.

For more details on how ADS-B traffic works, check out this graphic with three different scenarios. To see ADS-B traffic in action, this article shows how Garmin Pilot displays targets.

New iOS 15 feature alerts you when leaving your iPad behind