Everyone was once a beginner with the iPad (even if some of us don’t like to admit it). And like most things in life, the way we move from beginner to expert is by trial and error. Along the way, many of us made some mistakes with the iPad and aviation apps. But don’t feel bad – most pilots make the same ones at least once.

1. Not pairing the iPad to a Bluetooth headset. Many apps include audio-specific features that are difficult to hear from your iPad’s speakers in the noisy cockpit. For example, ForeFlight presents both visual pop-up and aural alerts for runway proximity, traffic, cabin altitude, destination weather, terrain, TFRs, final approach runway and low altitude, and Garmin Pilot plays audio alerts for potential traffic conflicts. Fortunately, most modern aviation headsets offer Bluetooth connectivity to allow you to hear these alerts clearly in your headet (or you can add that capability with this accessory). Connecting your iPad to your headset is easy — here’s how to do it to make sure never miss an alert. 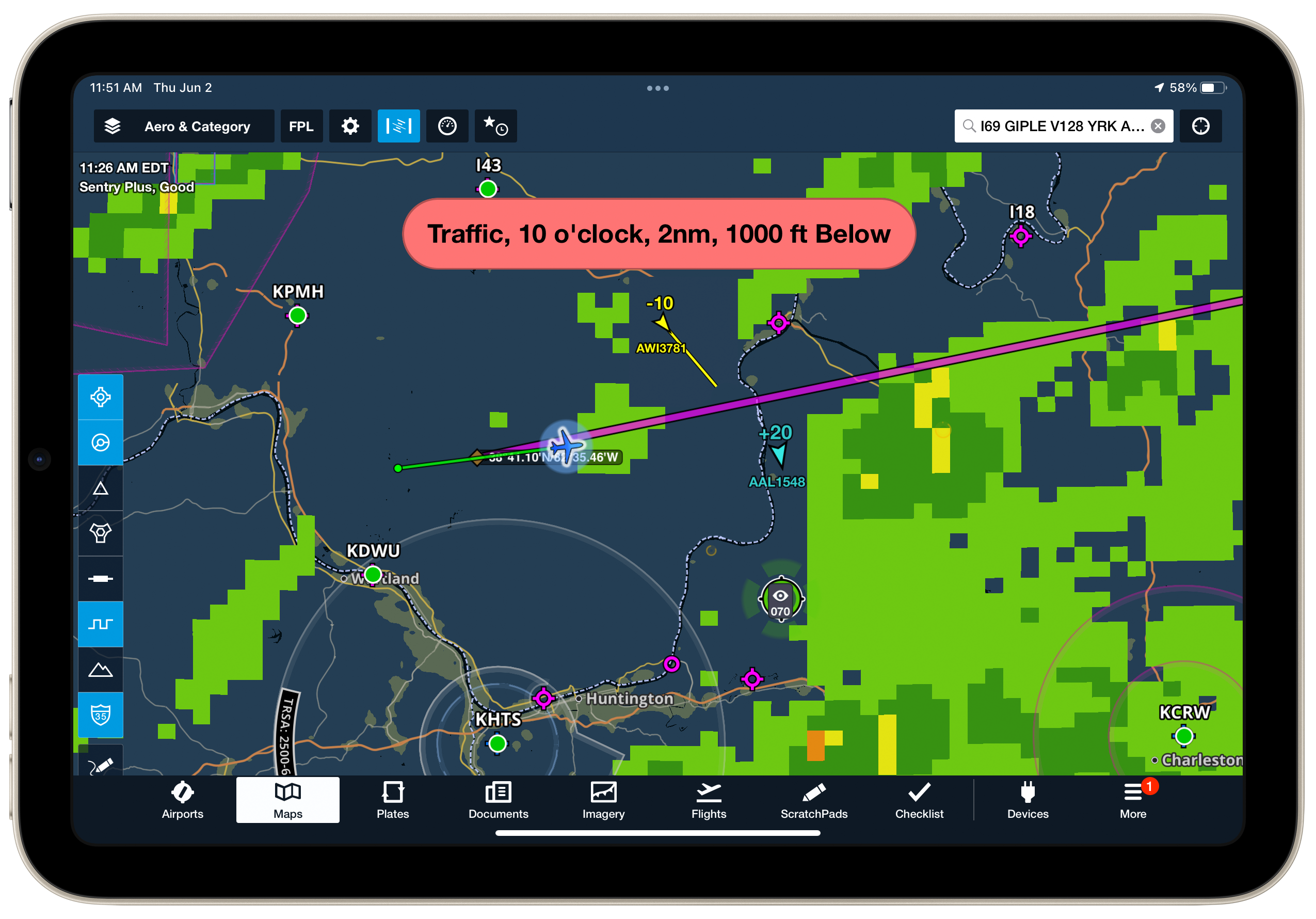 2. Charging your iPad in a restrictive mount or case. The most likely reason your iPad could fail in flight is overheating, which can happen for several reasons. The most common scenario is direct sunlight aimed at your iPad’s screen in the cockpit, causing it to quickly reach the internal temperature limit and trigger the overheat protection mode. Another way to quickly spike the temperature and activate overheat protection mode is to try to charge your iPad in flight while it’s inside of a full protective cover or kneeboard. Combine this with a little sunlight or a hot day and you’ll be looking at the temperature warning screen in a hurry. Here are ways to avoid that and other tips to keep your iPad cool in flight.

3. Not using a GPS source for position data. Surely all Apple mobile devices contain a GPS these days, right? Surprisingly, no. The Wi-Fi only iPad model does not include a GPS, while the upgraded version with cellular data does (and it works really). So if you head up on a flight with your brand new Wi-Fi only model iPad, you’ll quickly realize that the little blue airplane that showed your position on the ground when connected to the internet is gone. To remedy this, you’ll need an external GPS like a Bad Elf or Sentry ADS-B receiver.

4. Not configuring engine-out glide performance for your airplane. Both ForeFlight and Garmin Pilot include a best glide feature to help you plan a descent in the right direction and possibly make it back to a nearby airport. These use terrain, GPS data, winds aloft (from ADS-B or SiriusXM), and your aircraft’s best glide speed and ratio to shape a glide range ring around your ownship icon on the moving map display. This feature will only provide accurate guidance, however, after you enter your airplane’s specific performance data. In ForeFlight this can be done using the Glide Advisor setting found on both the aircraft profile screen and the main map settings menu drop-down, and from the Aircraft profiles screen in Garmin Pilot. 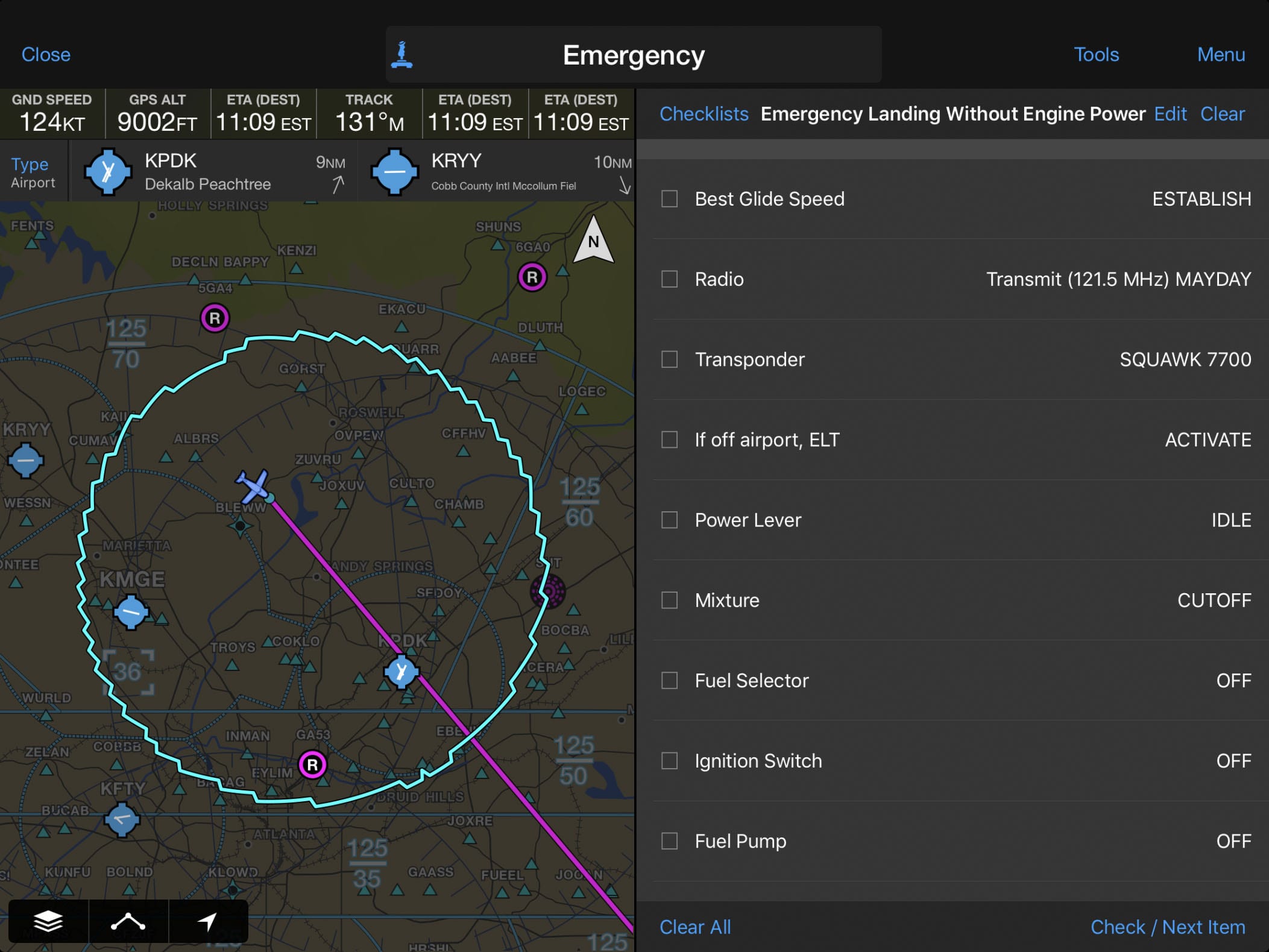 5. Using the app-auto update feature. For some time now, Apple has offered a handy automatic update feature for apps. When your iPad is charged up and connected to WiFi, it will download and install free app updates without any interaction. This is really handy for most apps, but not always. Imagine you’re taking off at oh-dark-thirty for LAX tomorrow, and your iPad is all set to go: charts downloaded, route store, favorites set. Without you knowing it, your app happens to auto-update overnight and introduces a bug that dumps your databases. If you don’t check before takeoff, you could have an unpleasant surprise on climbout. For that reason, we recommend turning off the auto-update feature the night before a big trip and always running the app with an internet connection before takeoff. 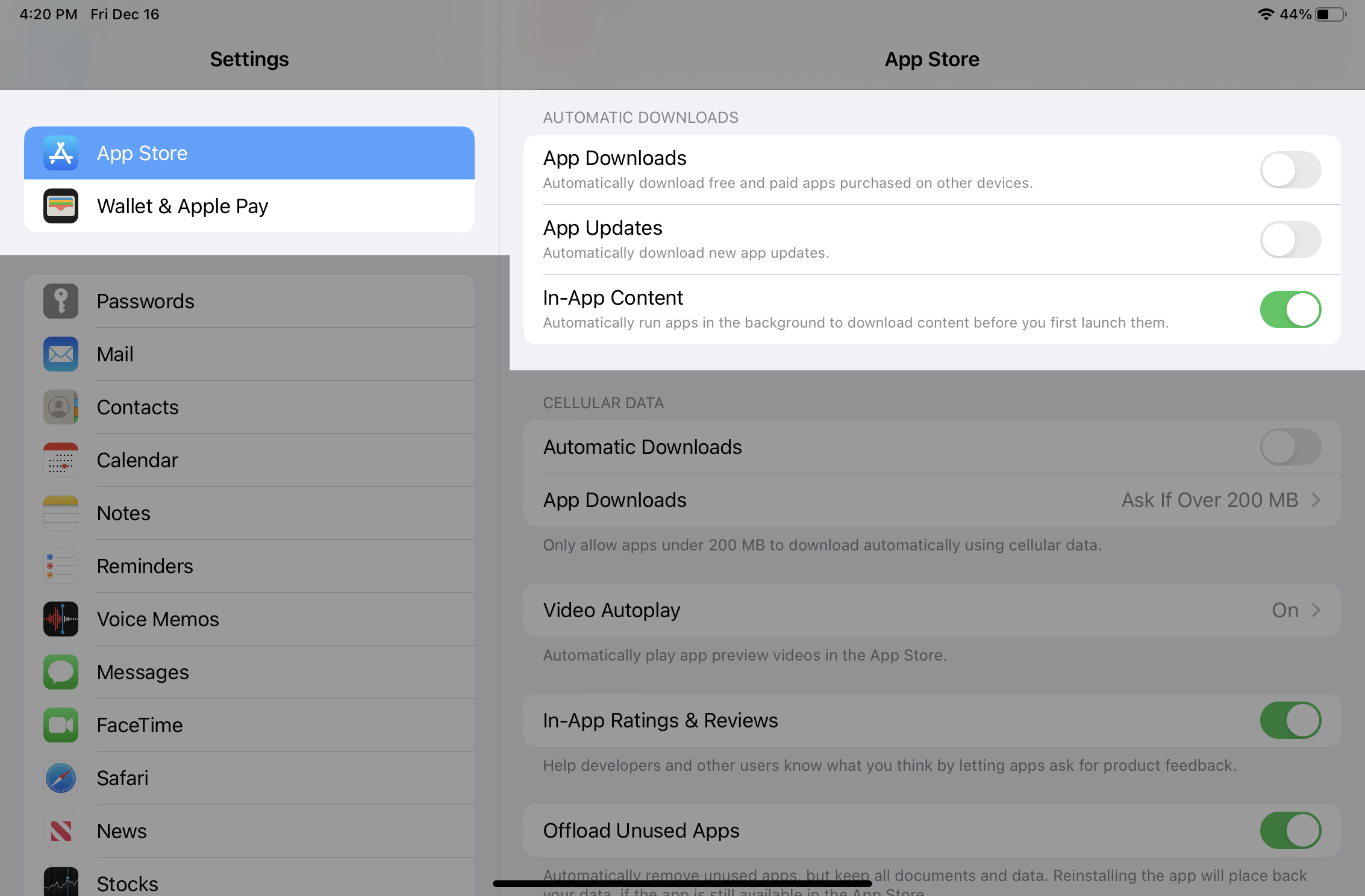 6. Slow-charging your iPad. There’s a good chance you have 5 USB chargers laying around at any given time and you grab whatever is closest to charge your iPad. While the “U” in USB does indeed stand for Universal, not all USB chargers are created equal. Most iPads sold in the past few years support fast charging technology, which can charge your iPad up to 50% in just 30 minutes. Fast charging requires a USB power adapter with at least 18 to 20 watts of output, which should be printed somewhere on the charger. For the ultimate upgrade, we recommend the Flight Gear 65W USB charger, which has 3 USB ports and can fast-charge your iPhone and iPad simultaneously. Don’t forget to bring along some type of charging option for the airplane, most commonly in the form of a backup battery or 12/24V USB adapter.

7. Updating your iPadOS the day it is released. It may seem tempting to download new versions of iOS the day they’re released (or a public beta) to try out the new features, but this can lead to more problems than it’s worth. Over the last few years, several of the big iOS updates have caused unexpected issues with aviation EFB apps and GPS accessories. To help out with this, we post all the main aviation app and accessory developers’ recommendations on when it’s OK to update after each iOS update on our iOS Green Light Update page.

8. Forgetting to download chart databases. By far the most frequent question we receive from a pilot new to the iPad: “I was looking at charts in the FBO, but when I took off they disappeared. What happened?” The problem is that the charts were being downloaded on the fly as used the app on the ground – streamed if you like. But since they weren’t permanently saved to your iPad, and since there is no internet connection in the cockpit, the charts can’t be displayed in flight. The best course of action is to first use the Downloads function in ForeFlight to save charts and databases to your iPad’s internal memory, and then use the Pack function to confirm everything is downloaded for the planned route before each flight. 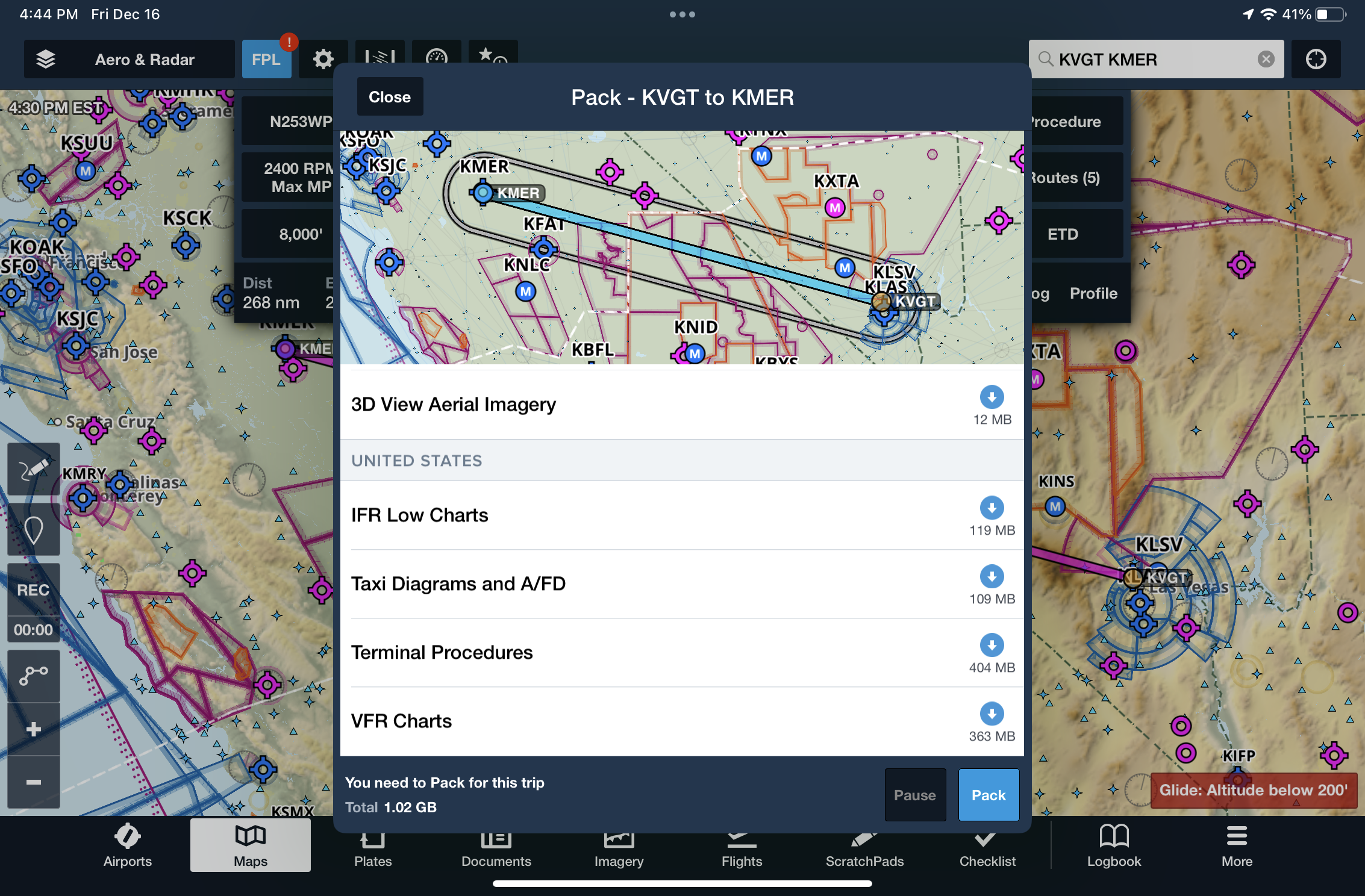 9. Flying with a cluttered ADS-B traffic view. Most apps support the display of ADS-B traffic when connected to a panel-mount or portable ADS-B receiver. When flying in congested airspace, however, the display can quickly fill up with numerous targets and make it challenging to visualize the ones that matter most. To help with this, ForeFlight features a Hide Distant Traffic option in the Map settings, which will only show aircraft within +/- 3500 feet vertically and 15 NM. Garmin Pilot provides advanced filtering as well, to show targets nearby, or those above or below you (useful during climbs or descents). 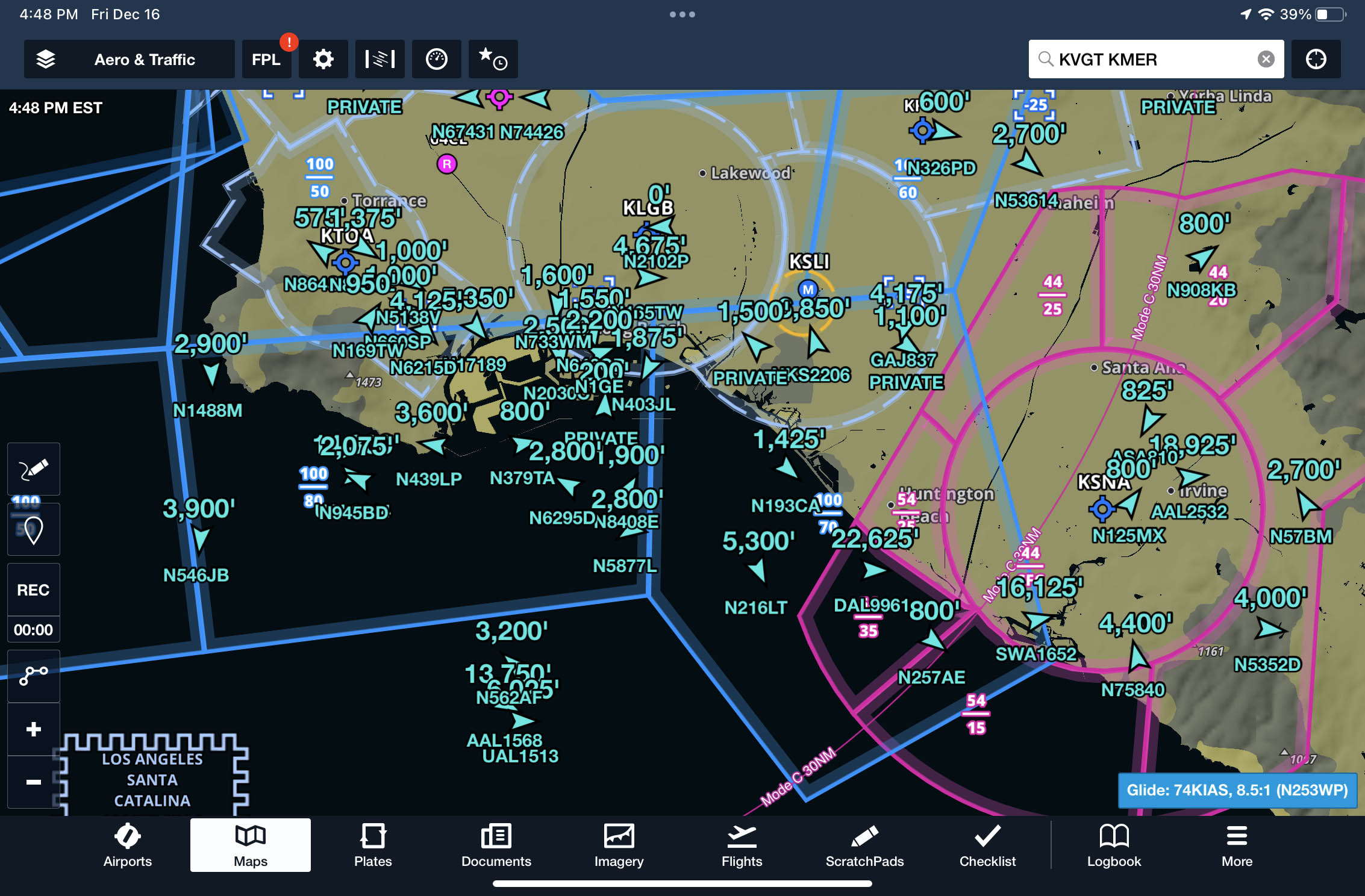 10. No backup source for charts or data. You are not legally required to carry backup charts or a second EFB when flying VFR or IFR under Part 91, but not doing so would be foolish. Most pilots today rely on a second installation of their primary EFB app installed on an iPhone or second iPad as a backup data source, in the unlikely event the primary fails or becomes unresponsive in flight. When following this plan, it’s just as important to prepare this backup device as if it were the primary, by making sure it is fully charged and has all the charts and data saved for offline viewing in the airplane. And if you’d rather add another layer of redundancy to your backup plan or in lieu of a second EFB, consider the tried and true paper chart option.