One of the most widely discussed topics among iPad pilots centers around which model is best to use in the airplane to display digital charts and navigation data. The short answer is that every iPad available from Apple today is more than capable of running even the most demanding aviation app with ease. The decision ultimately comes down to personal preference, specifically regarding screen size, performance, internal storage and the option to add cellular data connectivity (check out our 2022 buyer’s guide for a review of the pros/cons of each option).

What many may not realize is that the model with cellular data includes a bonus hardware feature, in the form of a dedicated internal GPS receiver. This provides an obvious benefit to pilots in the airplane when using aviation apps, providing location and navigation data without the need for an external GPS accessory.

Going back over a decade to the first several generations of iPads, the cellular model’s internal GPS performance was pretty disappointing. It took a long time for it to get an initial satellite fix, position accuracy was subpar, and putting your iPad’s screen to sleep caused a loss of reception 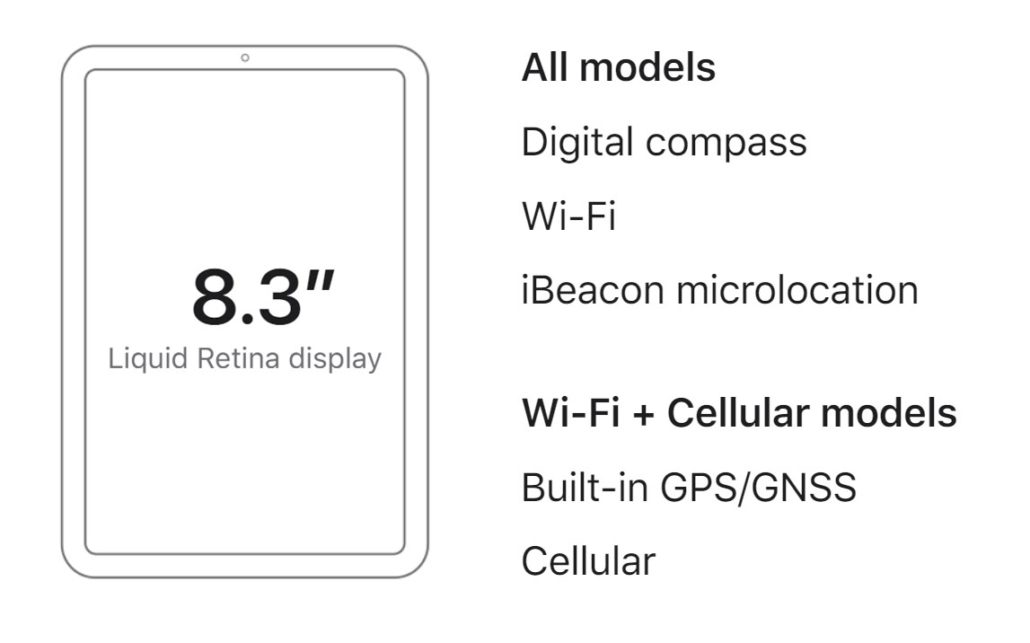 Before we go further, here are some simple facts related to the cellular data option. Every iPad ever made has both WiFi and Bluetooth, two wireless technologies for connecting to nearby devices (in the case of Bluetooth) and the internet (in the case of WiFi). The only additional option is to add cellular service, which allows the iPad to connect to the internet anywhere your cell phone works.

This comes at a premium though, costing an extra $130 to upgrade to the WiFi + Cellular model.  But as previously mentioned, the upgraded cellular model also includes a built-in GPS/GNSS receiver, which operates completely independently from the cellular antennae and does not require a cellular data plan or connection for the GPS to work. For this reason, many pilots purchase an iPad with cellular data, never sign up for service with Verizon or AT&T, and just take advantage of the built-in GPS for reliable navigation in any aviation app.

While just about every electronic device you can buy today includes a GPS chip, performance, speed and accuracy can vary greatly. For example, a dedicated Bad Elf GPS receiver will provide a much better experience when connected to an iOS device, compared to the GPS chip in a smartwatch. Differences result from antenna placement, sensitivity, power requirements, and the quality of the firmware in the device itself.

To test out the performance of the iPad’s internal GPS, we brought an new iPad mini 6 along on both an airline flight (as a passenger) and then in the cockpit of a Cessna for a flight across the U.S. For the tests we disabled Bluetooth and WiFi, to help measure battery life and ensure it was disconnected from the ADS-B receiver in the airplane.

The airline test ended up being purely accidental, as we were sitting in the aisle seat of an Airbus A320 and decided on a whim to test out the GPS reception. After disabling WiFi and Bluetooth from the main settings apps, we set the iPad on the tray table, opened up ForeFlight and waited. Much to our surprise, it only took about 30 seconds and ForeFlight was showing 5-meter accuracy, from a spot over 4 feet away from the nearest window! 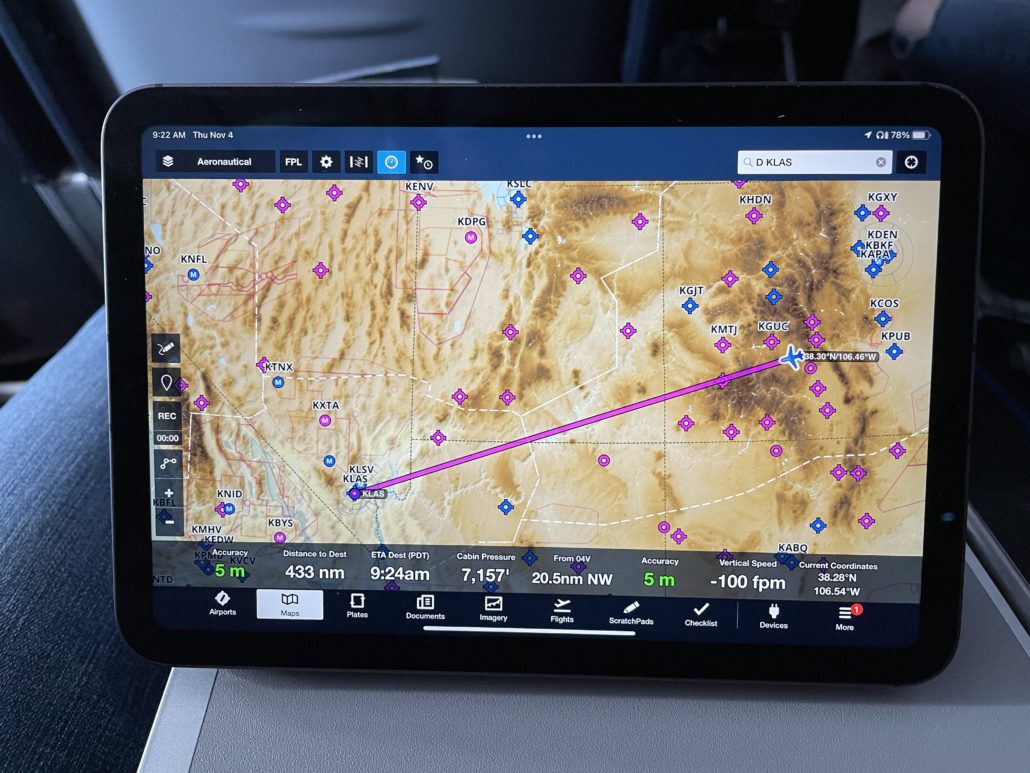 The next test was a bit more formal and designed to see how the iPad’s GPS performed when used in the cockpit. The trip included two 2-hour legs, between Las Vegas and Cincinnati. Here are some key takeaways.

We positioned the iPad on our lap in the front seat of the airplane, opened ForeFlight and it displayed our position on the chart in less than a second. ForeFlight showed an accuracy of 4 meters, which is very good (for comparison, a Sentry ADS-B receiver typically provides 1-meter accuracy). We then positioned the iPad on the floor of the airplane to test an obstructed view of the sky; while the accuracy dropped to 22 meters, it worked just fine. 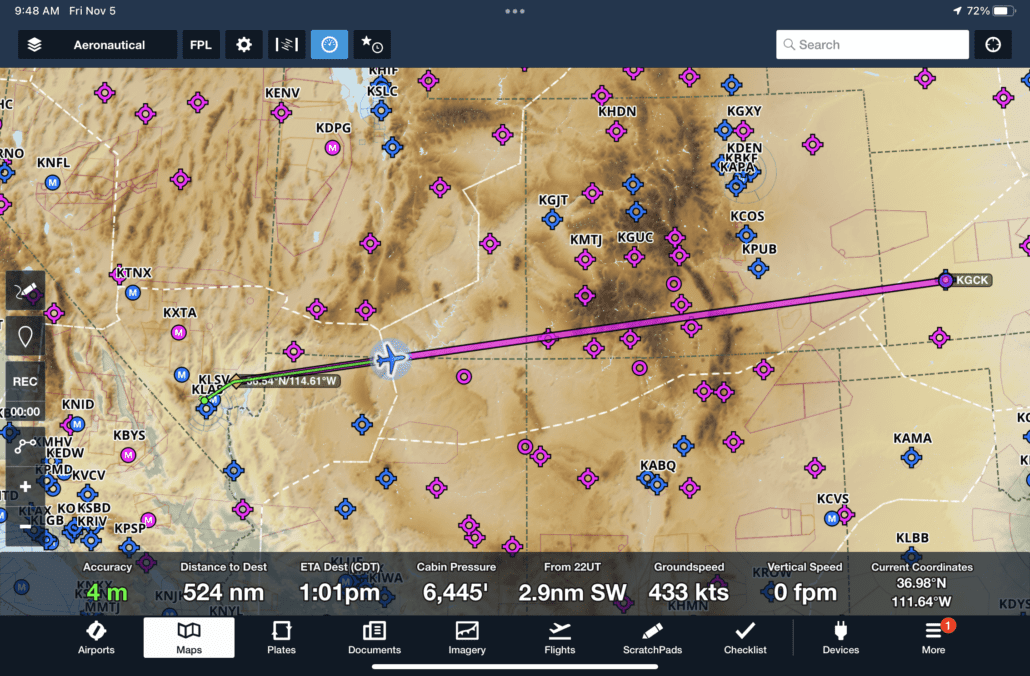 GPS performance worked equally as well in Garmin Pilot. The accuracy displayed in this app was 15 feet, which is about the same as the 4-meter accuracy reported in ForeFlight. 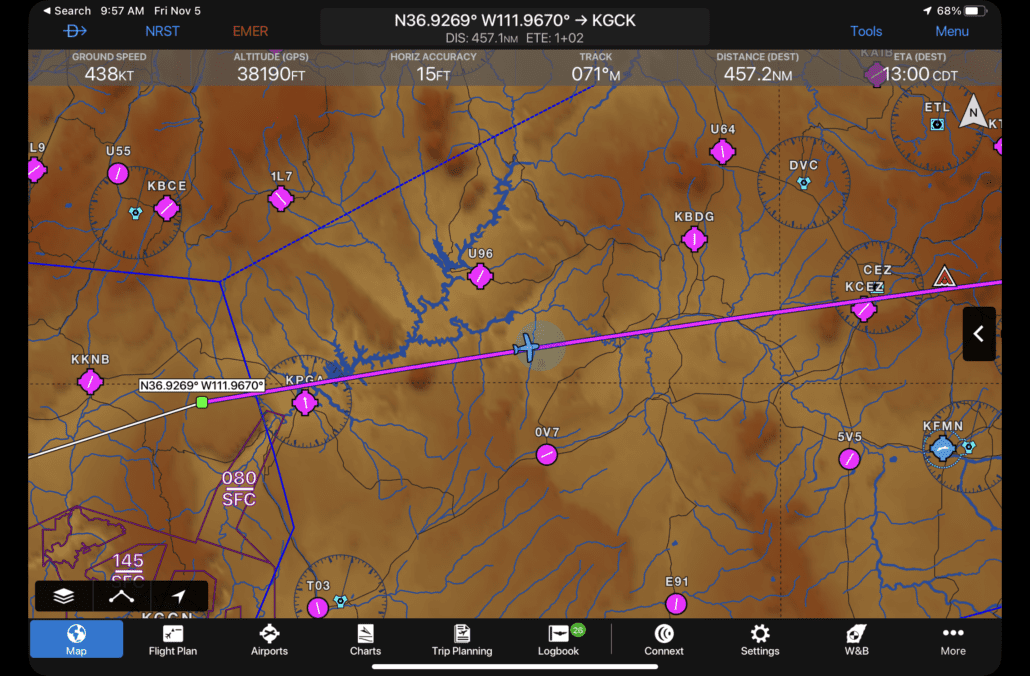 One of our previous gripes with the GPS found in older iPads is that it the GPS often took a while to get a good satellite fix and display position again on the chart when either switching between apps or putting the iPad screen to sleep and waking it back up. This is no longer an issue, as ForeFlight showed our location instantly each time the app was opened.

Many pilots prefer to connect their iPad to a portable ADS-B receiver, like Sentry, to receive weather and traffic updates in the cockpit (these accessories include a GPS receiver as well). If your iPad also has a built-in GPS, ForeFlight will automatically use the more accurate position source for location services, which in most cases will be the GPS from the ADS-B receiver. We ran a test to simulate the ADS-B receiver going offline by turning off the Sentry at altitude and found that the iPad automatically switched to using the internal GPS after about 5 seconds.

While many think the synthetic vision feature in aviation apps require an AHRS (attitude) source to function, this is not entirely true. When relying solely on the iPad’s internal GPS, the synthetic vision will display the same ground features, terrain and digital flight instruments, but will not show pitch or bank information. 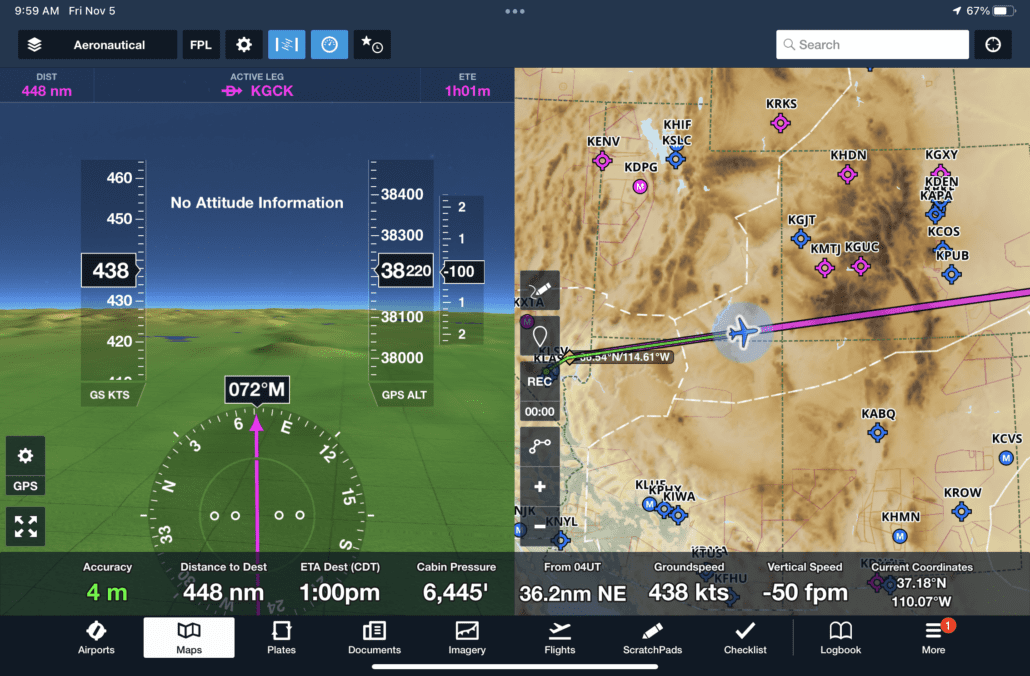 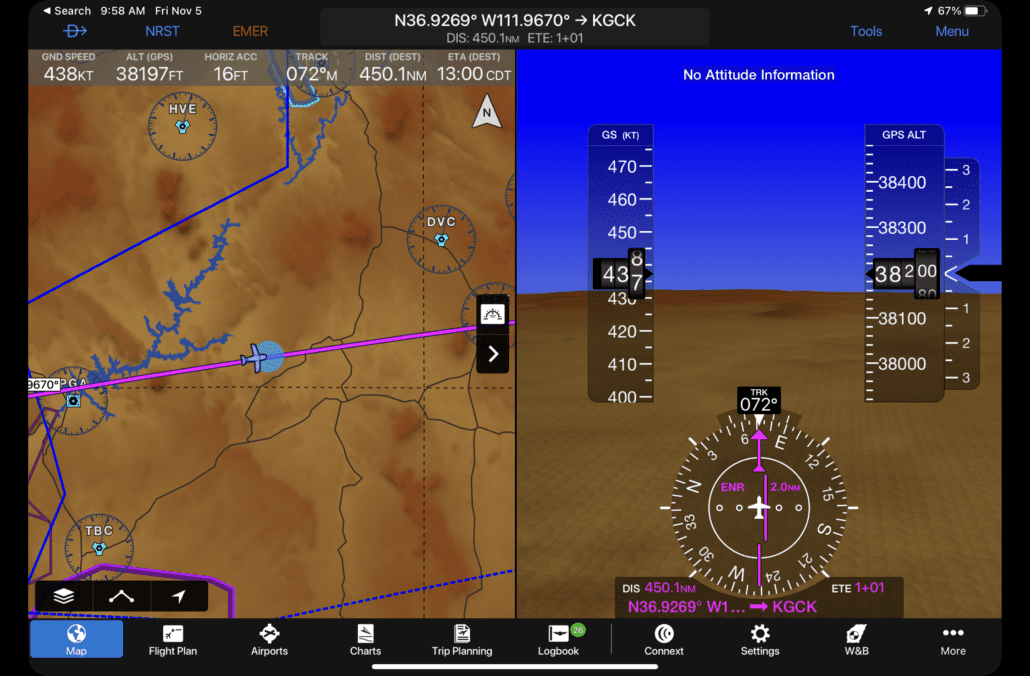 To compare iPad battery life between flying solely with the iPad’s internal GPS vs. using the GPS from an ADS-B receiver, we flew each of the 2-hour legs using each source independently. The first leg was flown with the iPad connected to Sentry, with WiFi and Bluetooth both turn ON and the screen set to full bright and left on the entire time. At the end of that first two-hour leg, the iPad showed 50% battery life remaining.

For the second leg, we turned WiFi and Bluetooth OFF (Sentry disconnected), confirmed the screen brightness was set to full, and used the internal GPS for location services in ForeFlight. After refueling, we then launched on the second 2-hour leg, starting with 50% battery life. The iPad had 2% battery life remaining at touchdown, indicating that battery usage was nearly identical to when connected to an ADS-B receiver.

There is a lot to consider when buying an iPad for aviation use and most of the decisions come down to personal preference. At the end of the day, the entry-level iPad for $329 will display aviation charts and data just as well as a decked-out iPad Pro for $2,399. Based on our experience flying with just about every iPad model over the past decade, the most important premium feature to consider is the addition of an ADS-B receiver. This will provide datalink weather and traffic in your aviation app, improve your decision making, and increase the safety of the flight.

Adding an ADS-B receiver will satisfy the GPS requirement for your aviation apps, but if you have room to spare in your budget, choosing the cellular model with an internal GPS may be the next best upgrade. It provides reliable and fast position data, serves as an instant backup to your primary GPS source and can add more utility to your iPad when away from your airplane.