Keeping all your portable devices charged in the cockpit isn’t easy. Most pilots fly with an iPad, a smartphone, and an ADS-B receiver. Some carry much more, like a backup iPad, a GoPro camera, or an Iridium communicator. There are hundreds of options for keeping all those batteries charged, from cheap to very expensive (and we’ve flown with many of them), but most simply aren’t cut out for the cabin of a light airplane. 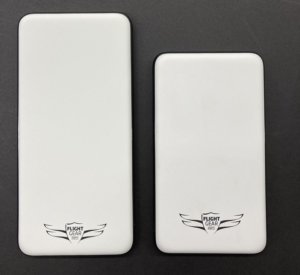 The new battery pack (right) is 20% shorter than the previous generation (left).

Our favorite option for the last few years has been a sleek white battery brick from Flight Gear, and now an updated version is available. The Flight Gear Battery Pack is 20% smaller than the preceding generation and still just half an inch thick, but it still packs 20,000 mAh of power. That’s enough to charge an iPad multiple times, but that’s not what makes it unique. The reason we’ve made it a permanent addition to our flight bag is because it’s so flexible.

Our number one complaint about most backup batteries is the proprietary cables that are used to keep them charged. When you need to charge your battery before a big trip, there’s usually a mad scramble to find some odd-shaped plug buried in a kitchen drawer. With the Flight Gear battery pack, you have plenty of options. It will charge with a micro-USB cable (common on thousands of devices, including many Android smartphones), a USB-C cable (found on Sentry and Stratus ADS-B receivers as well as MacBooks), or a Lightning cable (which works with iPads and iPhones). That means you’ll almost always have the right cable to keep this battery pack charged, because you already own one.

Another frustration with cheaper battery packs is that they lack the high amp ports that pilots need. While 1 amp is enough for a phone, higher power devices like iPads and ADS-B receivers need 2.1 or 2.4 amps. This battery pack has even more of those than the previous version, and one of them is a Power Delivery port:

While the battery pack will eventually max out if you plug too many devices in, we have successfully charged two iPads and a Sentry (all of which require 2+ amps) at the same time. You can also charge the battery pack while you charge another device (pass-through charging), and a four-light status indicator on the side lets you know how much power is left. 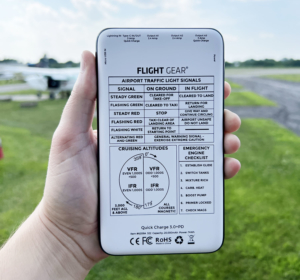 The back of the battery pack features helpful reference information.

The Flight Gear Battery Pack is at home in the cockpit. We’ve flown many flights with it in a variety of aircraft and have had no radio interference, a common problem with some battery packs (although the charging cable is usually the weak link). It’s also white so it stays cool in the sun. There’s even some helpful reference information printed on the back.

Safety is another concern in the tight confines of a general aviation airplane, and this battery has a lot of built in monitoring features. It is continually protecting against:

The Flight Gear battery pack is available now for the same price as the one it replaces ($79.99), which is a pretty good deal compared to some higher end battery packs we’ve tested at over $200. The smaller size, pass-through charging support, and Power Delivery port are all meaningful upgrades. It’s essential equipment in the cockpit, but it’s also very useful other places too. We’ve used it in the car, on camping trips (it is invaluable at Oshkosh), and around the house. 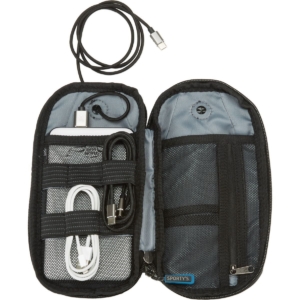 The new battery pack fits perfectly into the organizer case.

Sporty’s also introduced a custom-made organizer pack that is made for the Flight Gear Battery Pack. This semi-hard shell case has room for the battery, plus elastic straps to organize your charging cables. There’s also room on the right side for additional accessories like a cleaning cloth or a small wall plug. This is just the right size to hold all your essential charging gear but it remains small enough to easily slide into your flight bag. At $14.95, it’s a no-brainer addition.

There are also two handy pass-through ports that allow you to use the battery pack while it stays protected inside. For example, we left the battery in the mesh pocket, then pulled a Lightning cable through the front port and a USB-C cable through the back port (we are big fans of the smart charging cables with built-in screens for ensuring your device is getting the proper amount of watts).

Since the organizer pack has a handle at the top, it’s easy to hang it in the cockpit. In the picture below, we used the RAM suction cup arm to hang the pack, then quickly plugged the cables into our iPad and Sentry Plus. This might be overkill for a flight in the pattern, but in an airplane with no cigarette lighter this is the way to fly on a long cross-country. 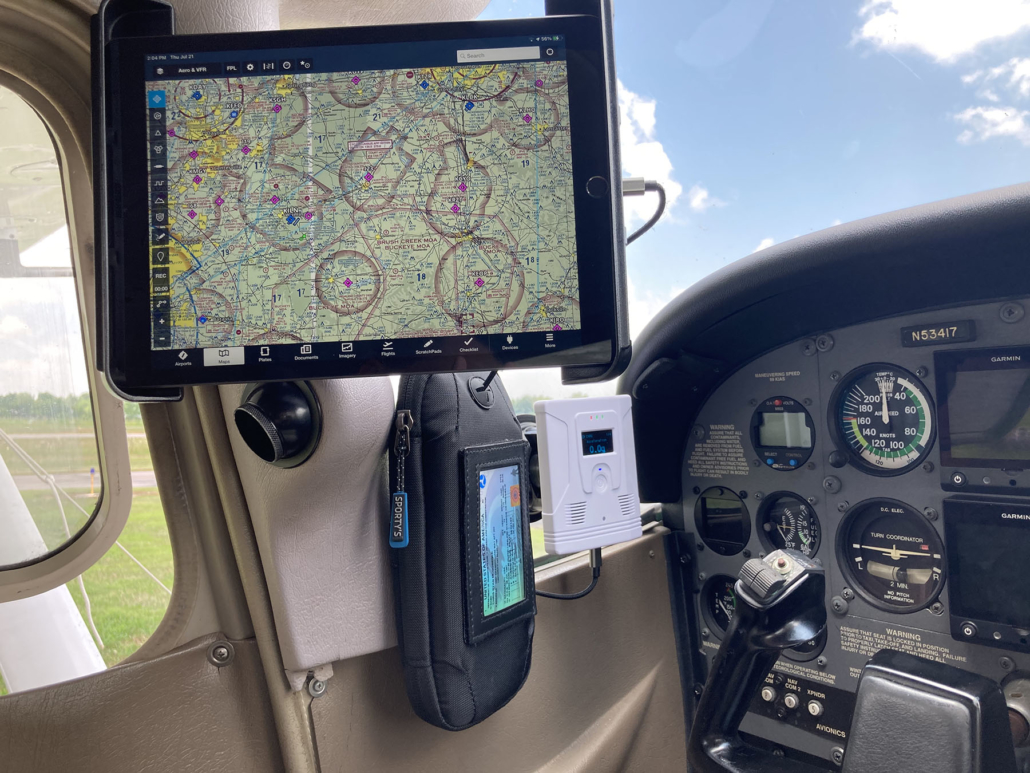 How to use CloudAhoy with Sentry Plus track logs