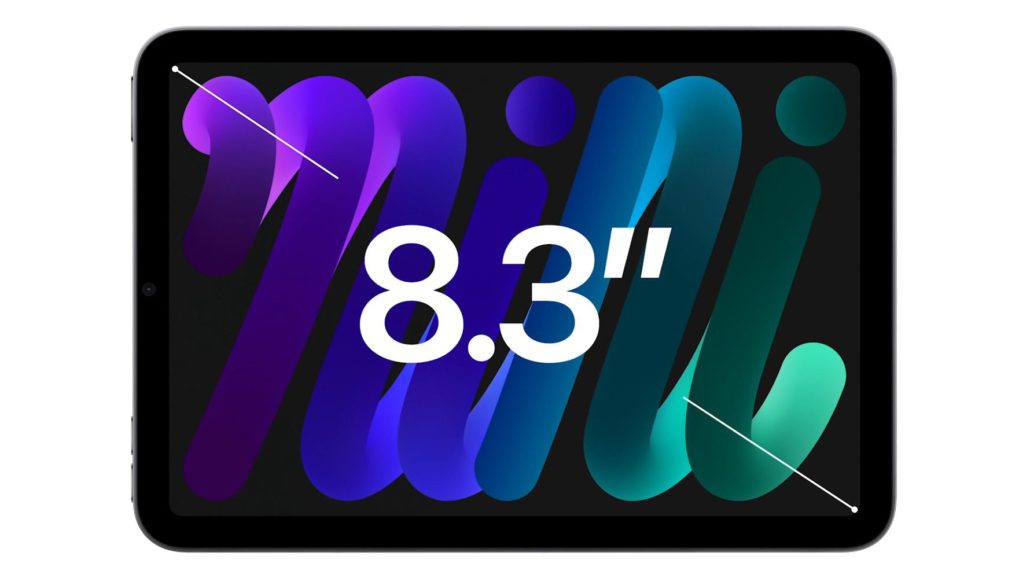 Apple took the wraps off their all-new iPad mini a few weeks back and started shipping just a few days later. Some had worried that the smallest iPad model, long the most popular option for pilots, might be going away but this update should ensure its survival for at least a few more years.

We received our new model earlier this week and immediately put it through the paces in the cockpit to see how stacks up against previous iPad Mini models. You’re going to love it – here’s why.

The iPad mini is a favorite among pilots thanks to its small footprint, lightweight design and affordable price. We were glad to see that the new model followed in the footsteps of the iPad Air’s recent redesign, with a slimmer bezel, larger screen and TouchID incorporated in the top power button.

The first thing you’ll notice when comparing the mini 5 to the mini 6 is that the new model is actually shorter than its predecessor, by about 0.3 inches. But thanks to the narrower bezel depth at the top and bottom, the screen size actually measures 0.4 inches larger on the diagonal (8.3″ vs 7.9″). This might not seem like a lot, but it is definitely noticeable in the cockpit. The two models are nearly identical when it comes to width and depth, so the new mini 6 will still work with many existing kneeboards and adjustable mounts (more on that later). Both models weigh the same too, at around 0.65 lbs. 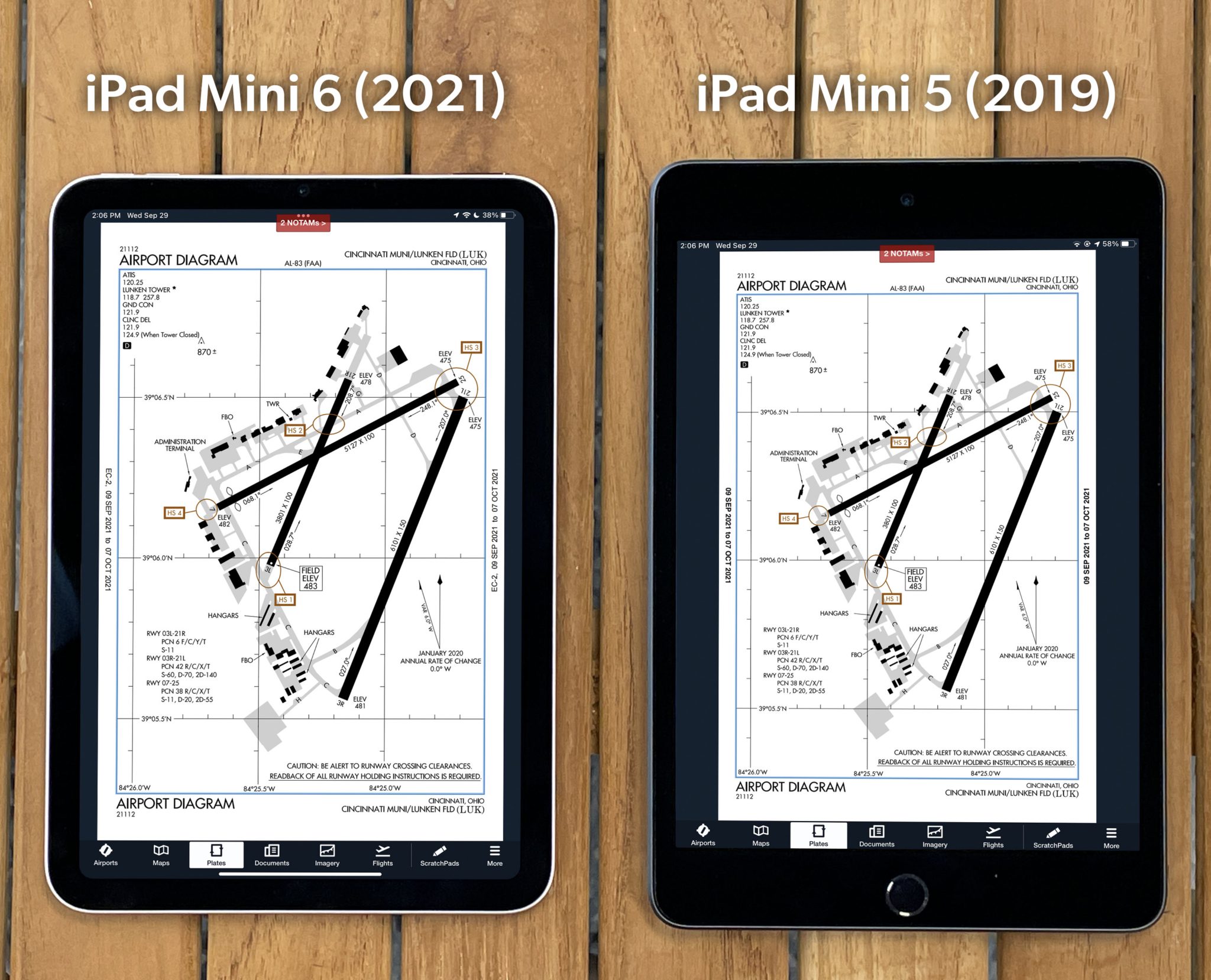 The iPad mini 6 uses the latest generation A15 Bionic chip, which is a big upgrade compared to the A12 Bionic chip on the mini 5. Here’s Apple’s description on the jump in performance:

The 6-core CPU delivers a 40 percent jump in performance, and the 5-core GPU delivers an 80 percent leap in graphics performance compared to the previous generation of iPad mini.

The mini 5 was no slouch, but the new model feels snappier when panning around charts and displaying complex graphics. The real gains would be noticed when using more processor-intensive apps, like 3D gaming or video editing. The display itself is the same in terms of brightness and resolution specs and includes the same anti-reflective coating. We mounted both models in the airplane, side-by-side, and the screens looked identical.

Another big change is the removal of the home button, which was previously positioned at the bottom of the screen. There’s no room for a home button with the new design, so interactions rely solely on swipe gestures, just like the newer iPhones, iPad Air and iPad Pro.

While there is no FaceID feature here, the top power button incorporates the familiar TouchID security feature. This instantly unlocks the iPad when you touch the button with a fingerprint recognized by the device. We think this works better and is more reliable than FaceID in the airplane, especially when wearing sunglasses and a headset.

The location of the volume buttons were also moved to the top left of the device. This was done to accommodate the mini’s support of the 2nd generation Apple Pencil, which magnetically attaches to the side of the iPad mini for storage and charging.

Following the direction of the iPad Air and iPad Pro, the new mini includes a USB-C port for charging. This is a welcome change, as most new portable electronic devices manufactured today use USB-C, with the exception of the iPhone. You’ll find a 20W USB-C power adapter and charging cable in the box, which will charge the device faster than the standard lightning cable and 5W adapter included with the previous mini. The advertised battery life is the same as the mini 5. 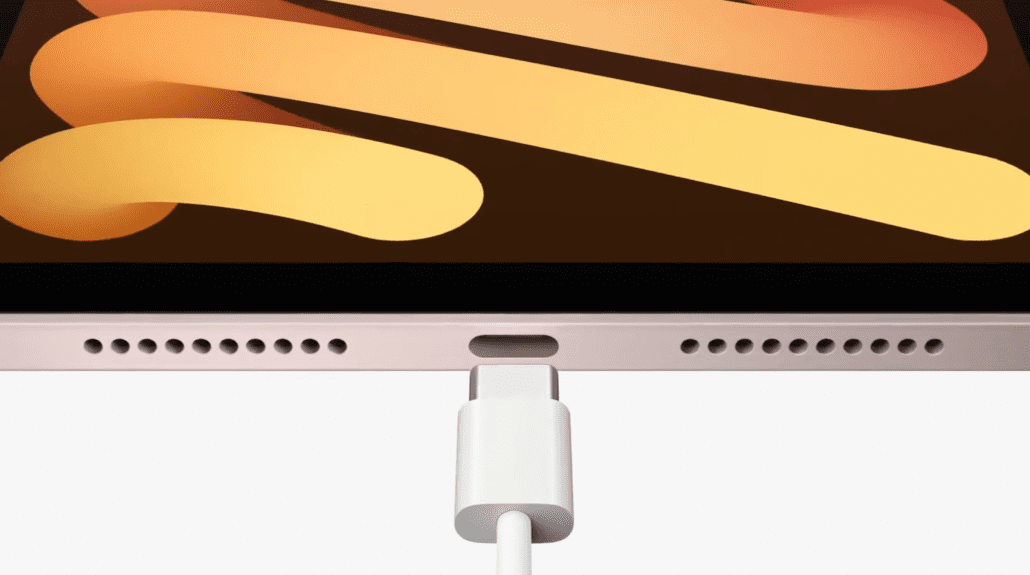 The iPad Mini offers the most flexibility when it comes to mounting in the cockpit and works well in many locations. A favorite option among pilots is to use a suction cup to mount it on the left side window, where the Mini’s smaller size doesn’t block much of the view in the lower section of the front window. 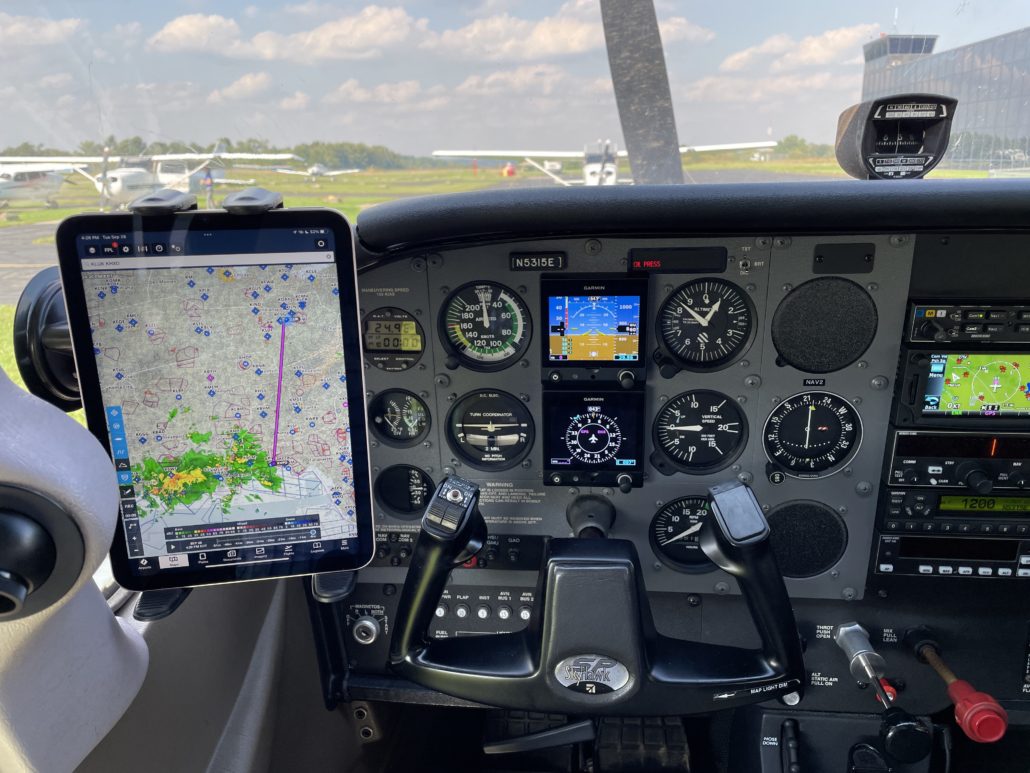 In the example illustrated above, we used the popular Robust Universal iPad Suction Cup Mount. This adjustable mount works with all iPad sizes thanks to its adjustable base, even if you keep your iPad in a case.

Since the footprint of the iPad mini 6 is slightly smaller than the previous models, form-fitting cradles from RAM, Pivot, MyGoFlight and X-Naut will not work the new model. Look for updated versions of these iPad mini mounting systems to hit the market in 2022.

The smaller size also lends itself well to mounting on the yoke and is small enough to position in either landscape or portrait orientation: 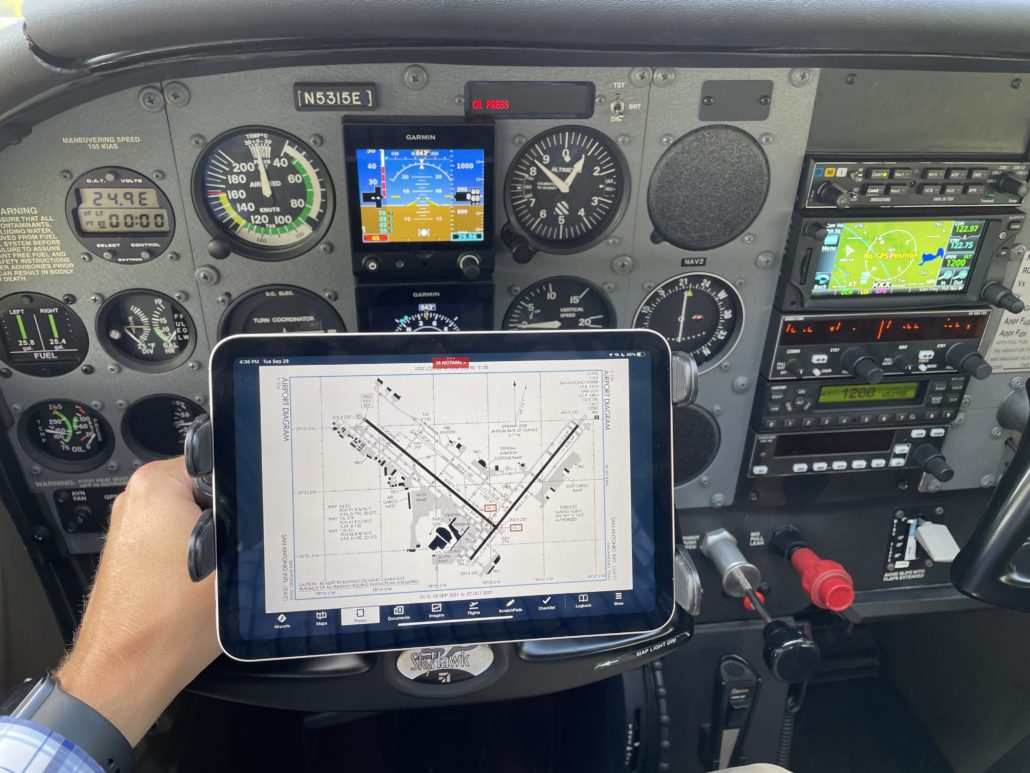 We recommend Robust Universal iPad Yoke Mount for this location, which uses the same versatile mounting base as the Robust suction mount.

The last option to consider is a kneeboard, which works well for aircraft without a yoke and for those wanting additional protection and pockets to keep accessories within reach. There are several options here, ranging from basic straps to protective kneeboards with lots of organization. All of the options below were designed with flexible straps and have no issue accommodating the smaller size:

It’s worth noting that some of these kneeboards use straps or clips at the top to secure the iPad. They rest across the top and could activate the volume or power button if you force the iPad in from the bottom.

The new iPad mini 6 starts at $499 for the 64GB model, which is $100 more than the mini 5. Increase the storage to 256GB and the price jumps to $649. And as with all current iPad models currently in production, the upgraded model with 5G cellular data connectivity includes a dedicated internal GPS receiver.

If you’re in the market for a new iPad and prefer a smaller tablet, now is the time to upgrade. The mini 6 includes the latest technology Apple has to offer at an affordable price and will offer many years of use.