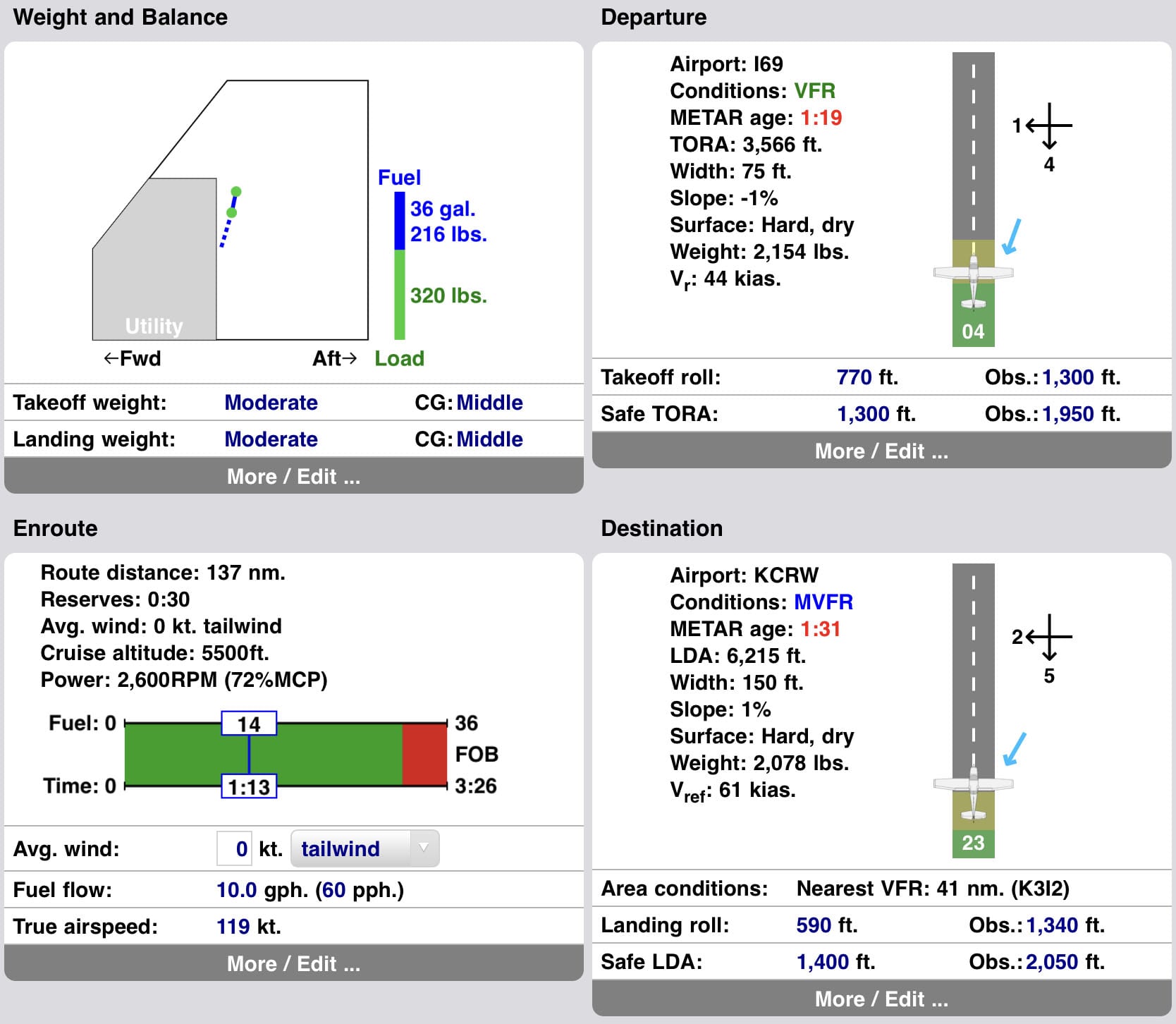 Every once in a while you come across an app for iPhone or iPad in the App Store that seems to be too good to be true, whether for aviation or general use. The collection of apps from POH Performance fall into that category and provide a wide variety of trip planning and performance calculation functions.

The developers recently added two new apps for the Piper PA28 series of airplanes (Piper Warrior and Archer) and Daher Kodiak, adding to the existing 5 individual performance apps for Cessna 172, Cessna 182, Beech Bonanza, Beech Baron and the TBM turboprops. There are also versions of the app available for Android, and online in a web browser.

All of the performance apps are free and the source code is published in order to foster a community effort, according to the developers. Volunteers have helped to code much of the model data. The apps are widely used, with the Bonanza Performance and Baron Performance becoming the standard at the American Bonanza Society. And the TBM Performance app is widely used by TBM instructors and at Simcom.

Each app includes a basic, but functional, layout that allows you to compute weight and balance, takeoff and landing distances, IFR climb performance, en route calculations, holding pattern entries, power-off glide distance and more. Each app includes data for most of the variations of that particular airplane model too. For example, performance and weight and balance data is stored for just about every model of Skyhawk, starting with the C172A up through today’s C172S with the Garmin G1000.

After downloading the app you’ll want to first set up a new airplane profile. This is accomplished in the More section of the app, and requires basic info like N#, empty weight, CG and optional equipment installed. 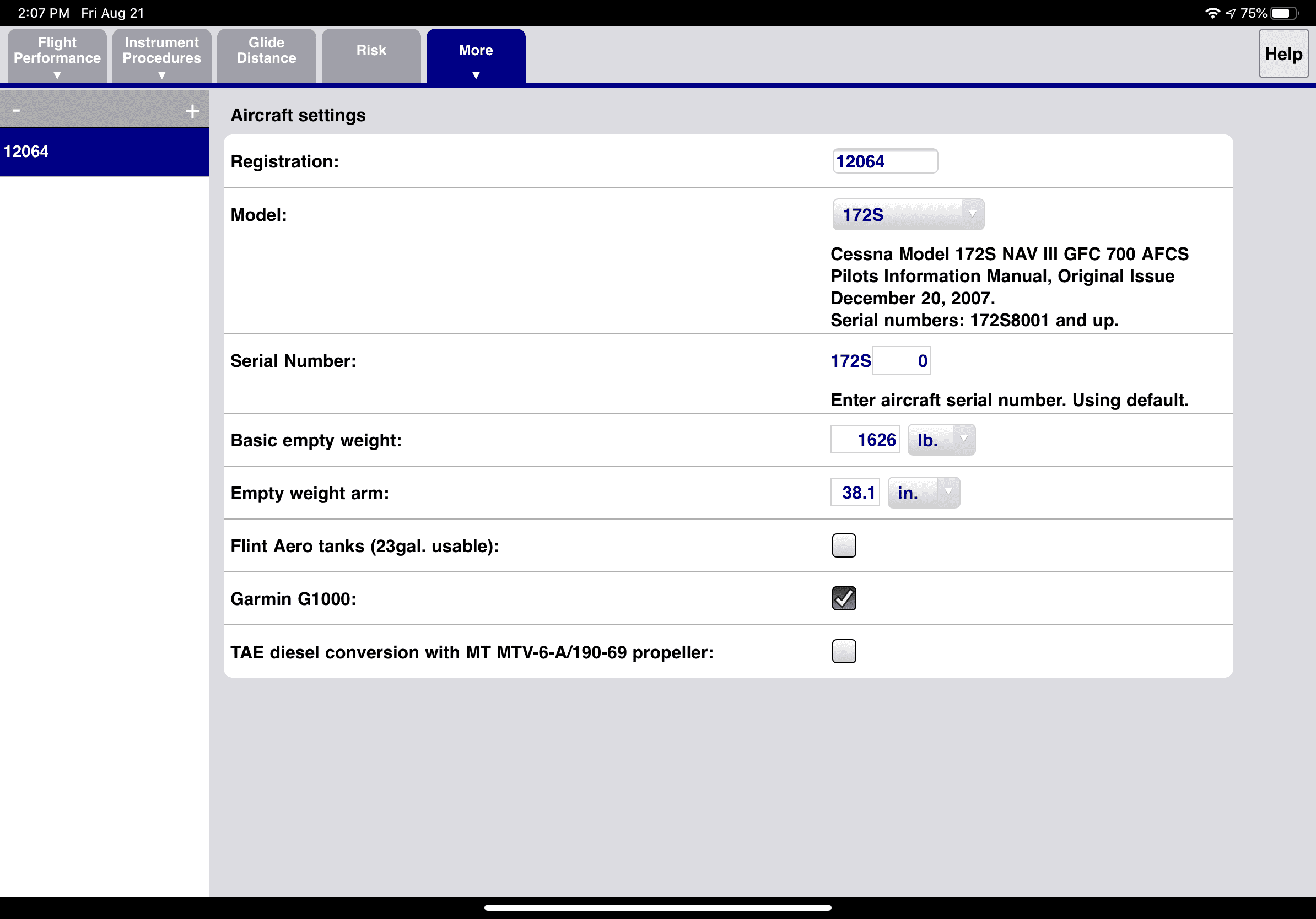 POH Performance includes free cloud sync services to back up and sync your data, which is pretty impressive for a free app. In addition to protecting your data, it’ll allow you to view your aircraft profiles and planning data on your other iOS devices, in the Android app or online in your web browser. 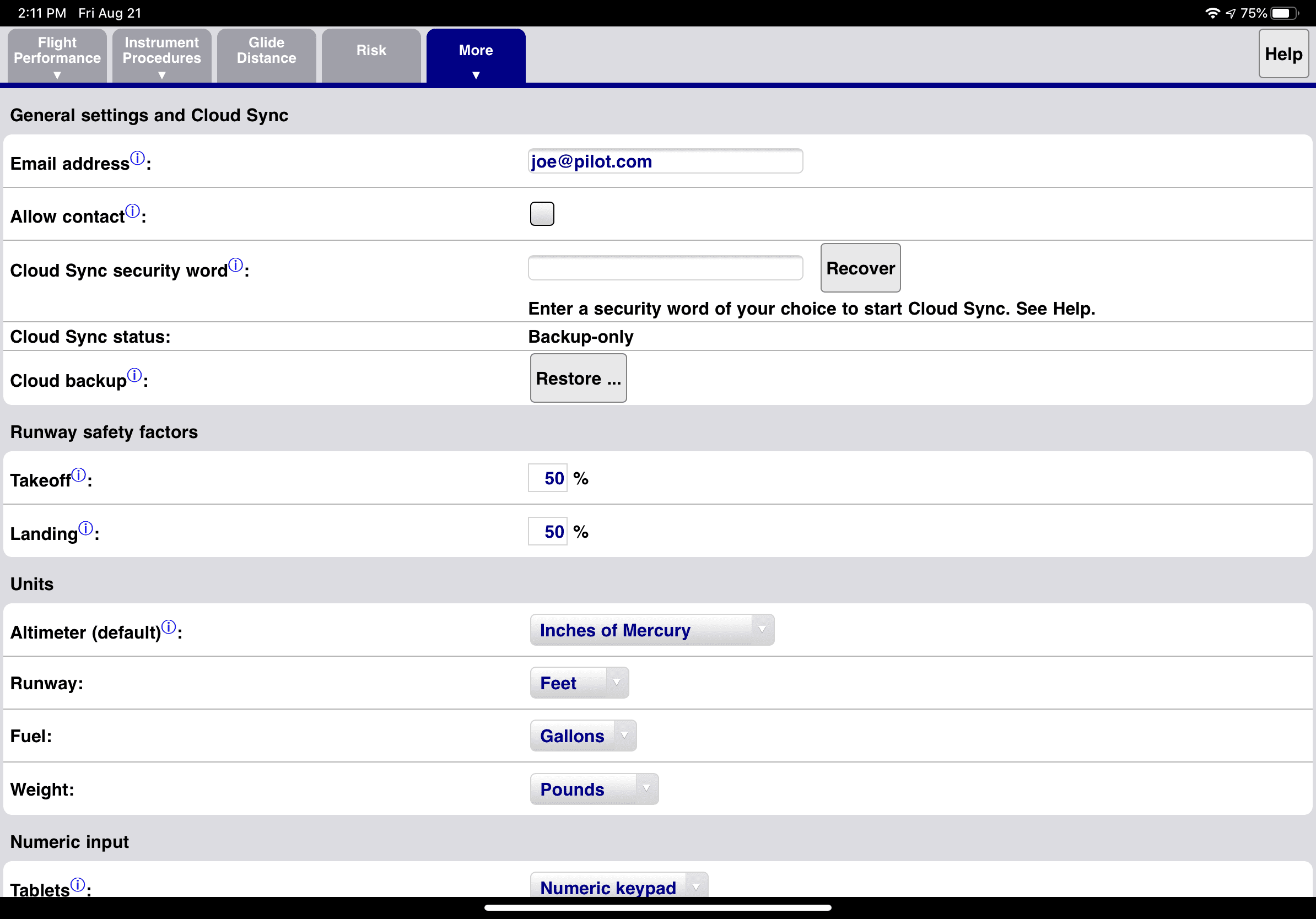 This feature is accessible in the Settings section of the More tab, alongside other user preferences for the app.

To get started, go to the Flight Performance tab and select the first option from the list. Here you’ll enter your basic flight plan route and select the airplane N# for the flight. 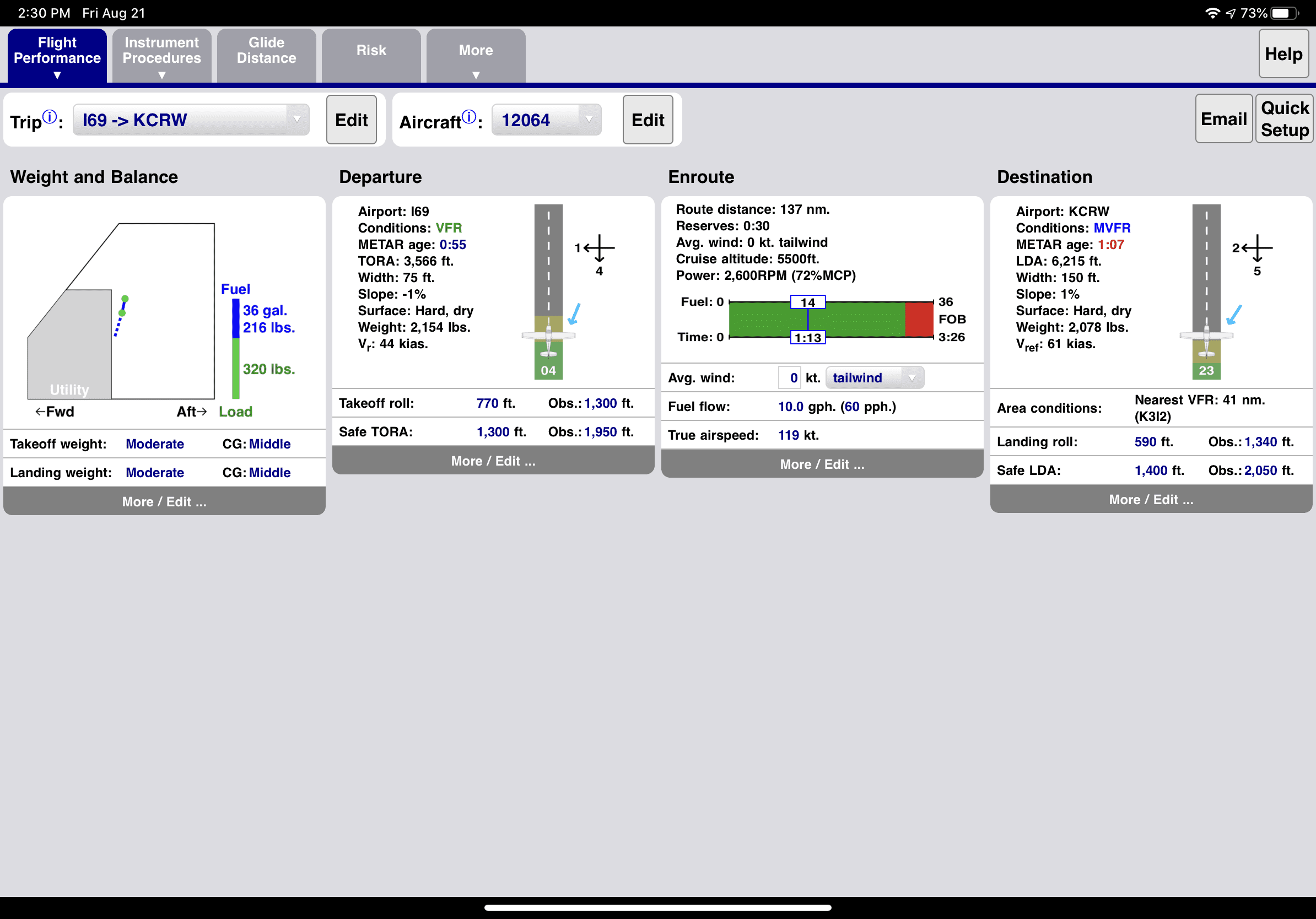 The most useful features in the POH Performance apps are the Weight and Balance and Takeoff/Landing distance calculators. The weight and balance feature auto-populates the basic profile for your airplane based on the N# and type, and allows you to quickly enter loading information in the fields on the screen. It then calculates everything you need to know for the flight, including ramp/zero-fuel/takeoff/landing weights, CG and a visual depiction of the loading in a color graph. 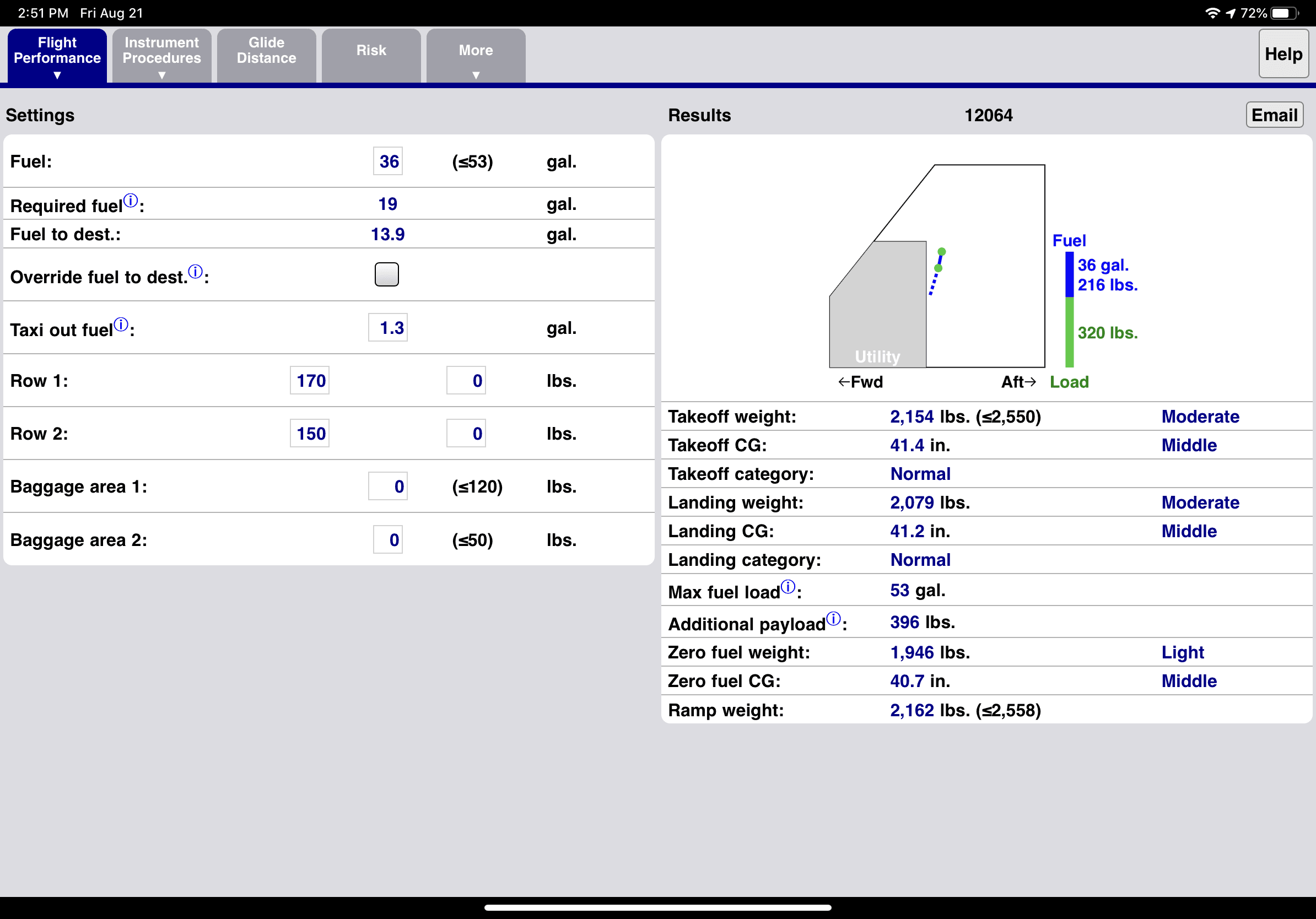 Next head down to the Departure tab and you’ll see most of the pertinent data is already entered based on the trip plan and current METAR. Adjust any of the variables as necessary, and you’ll see a full performance analysis on the right side of the screen. 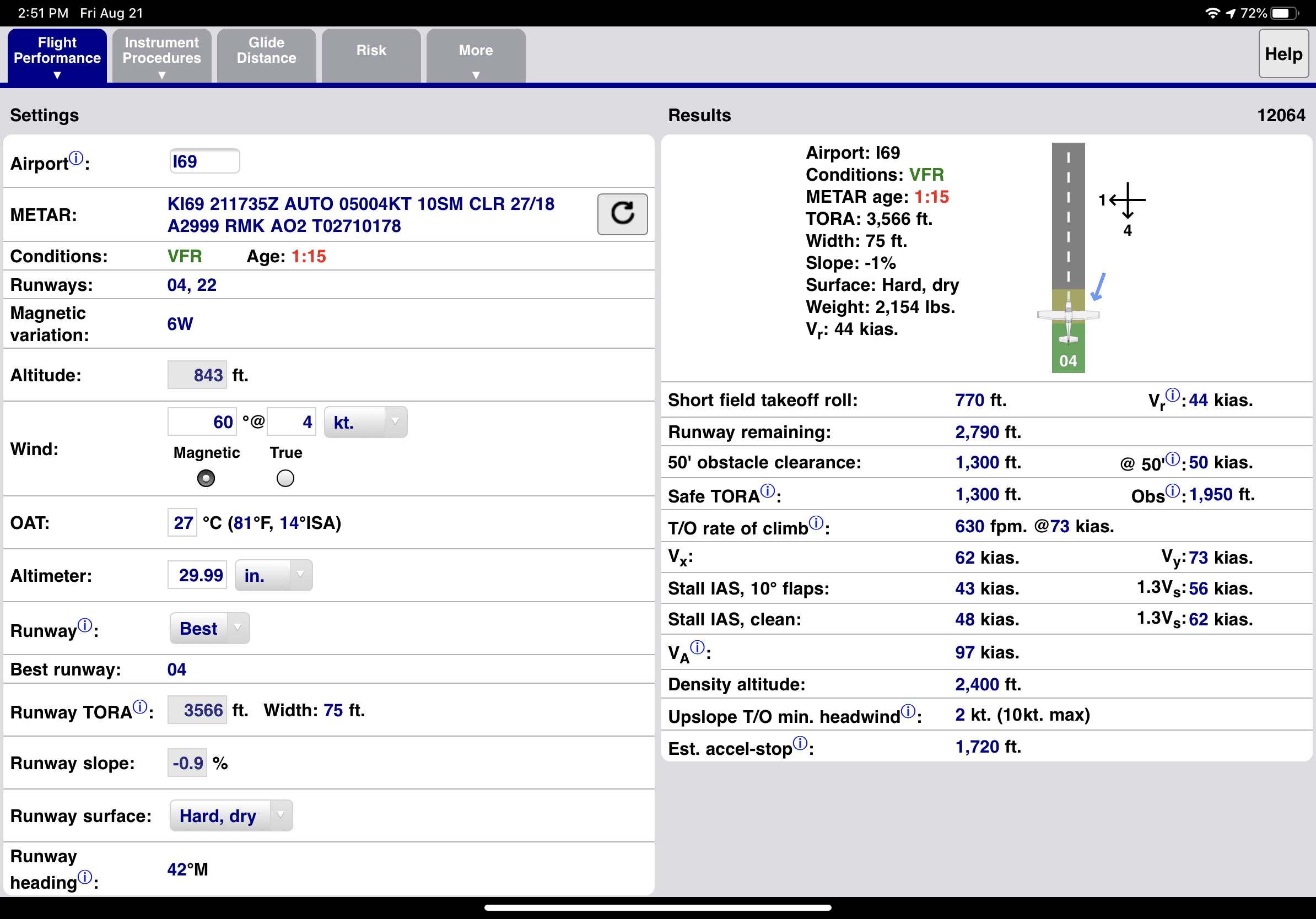 The Enroute calculator takes care of the flight calculations, and requires just a few additional inputs to provide a wide-range of speed and fuel calculations. 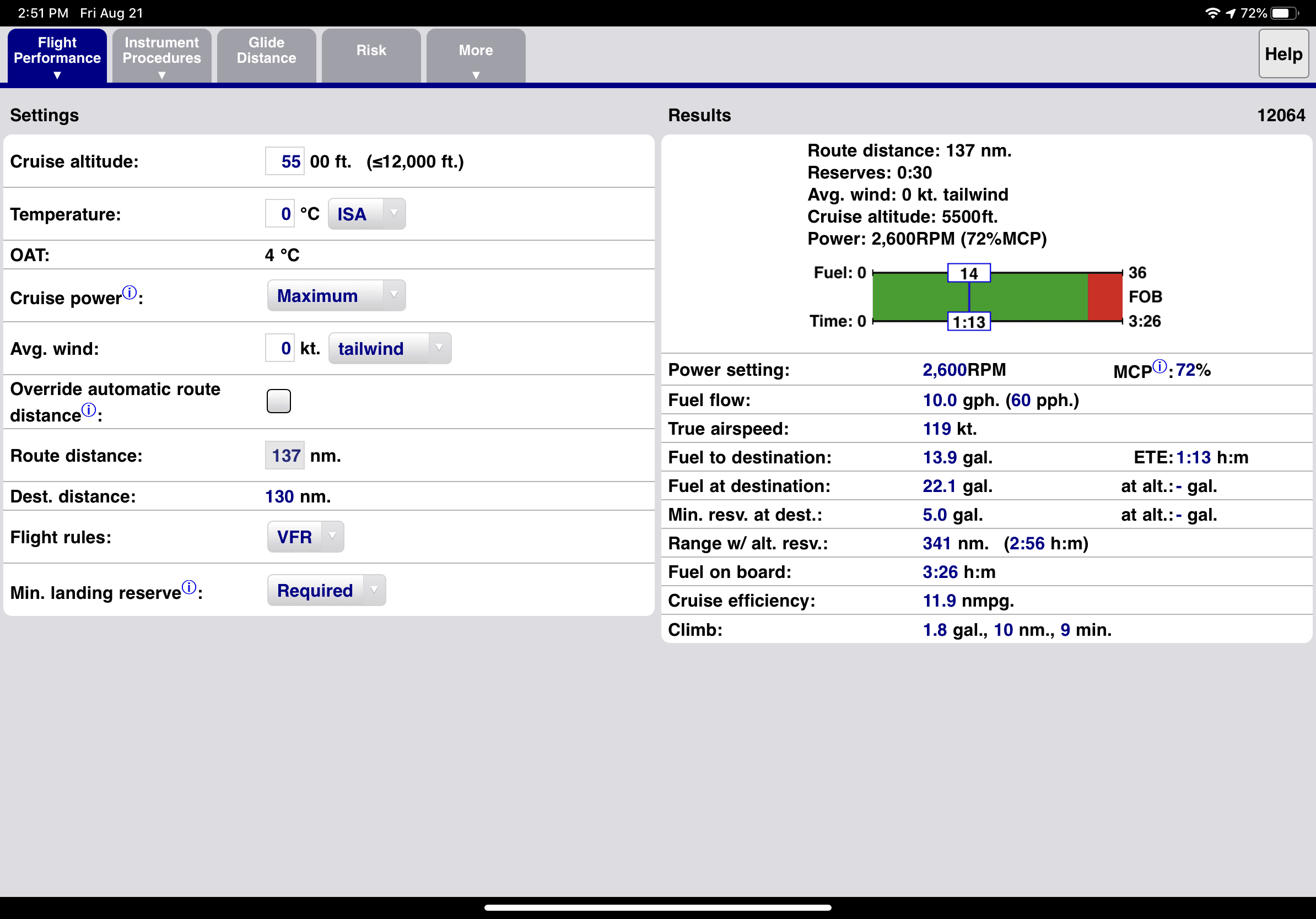 The layout of the Destination calculator is similar to the Departure section and computes landing distance and associated performance values for the arrival. 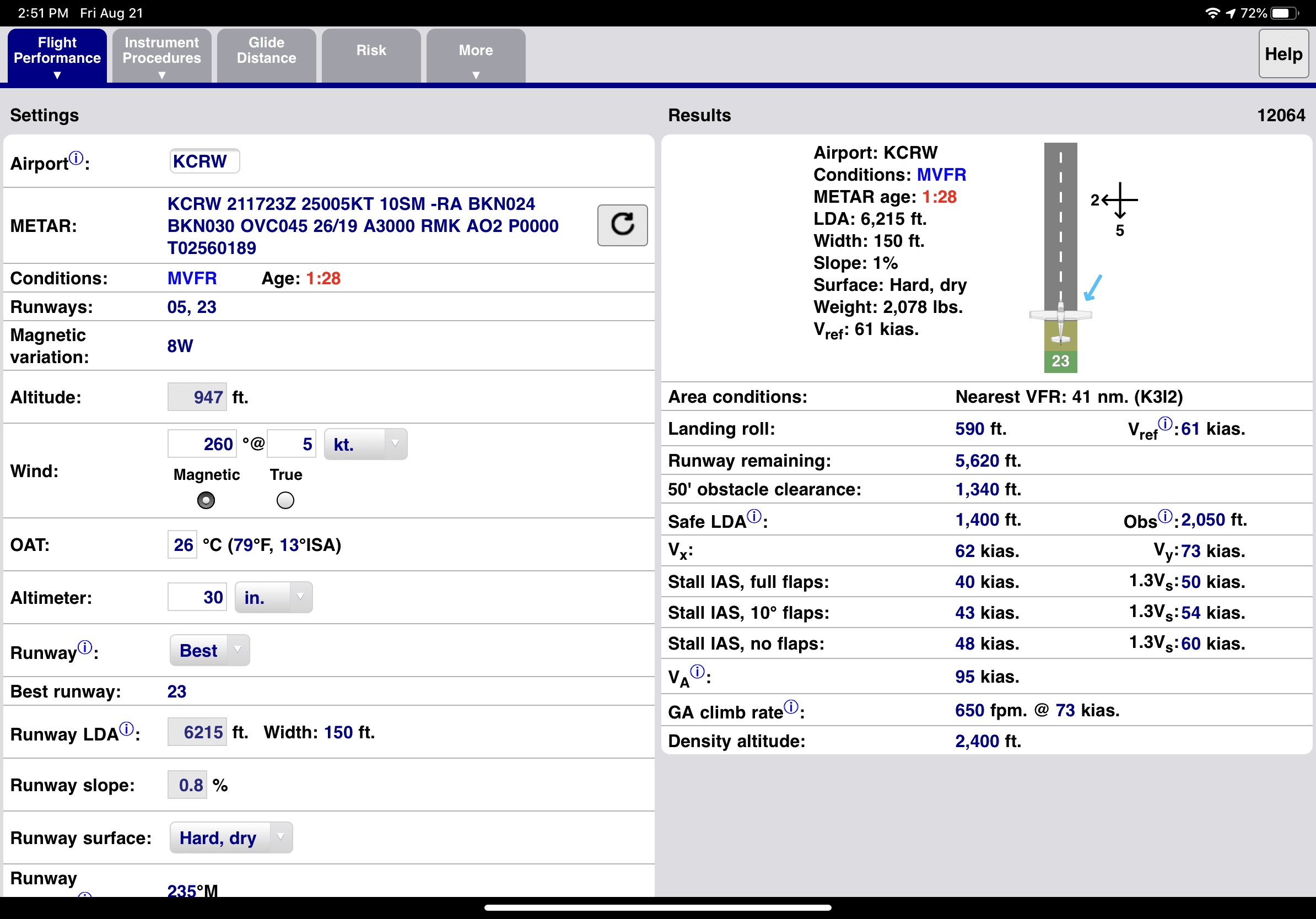 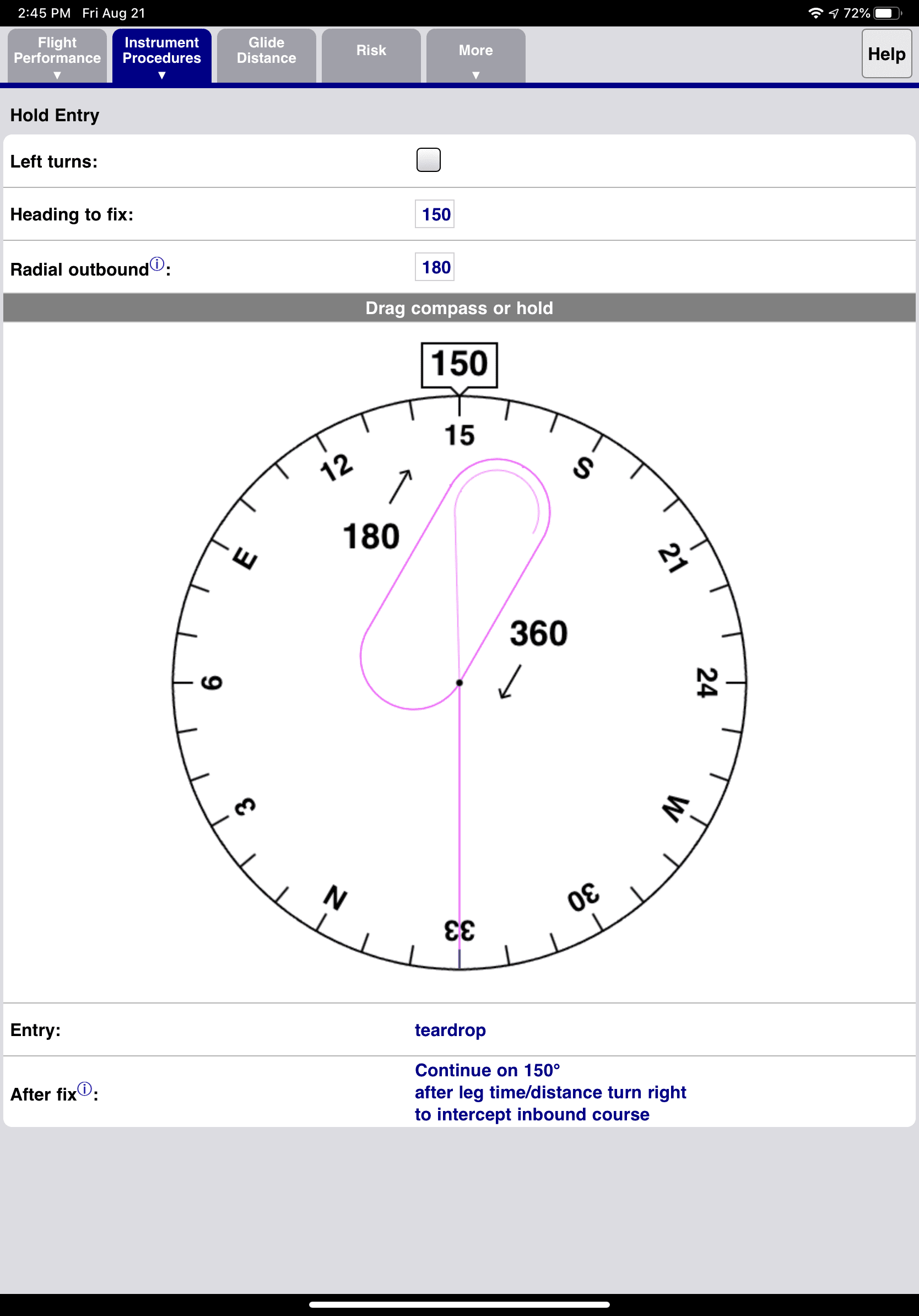 Lastly the app include a glide distance calculator, which is probably more useful for developing general awareness about your airplane’s glide performance, vs. being used in a real emergency. 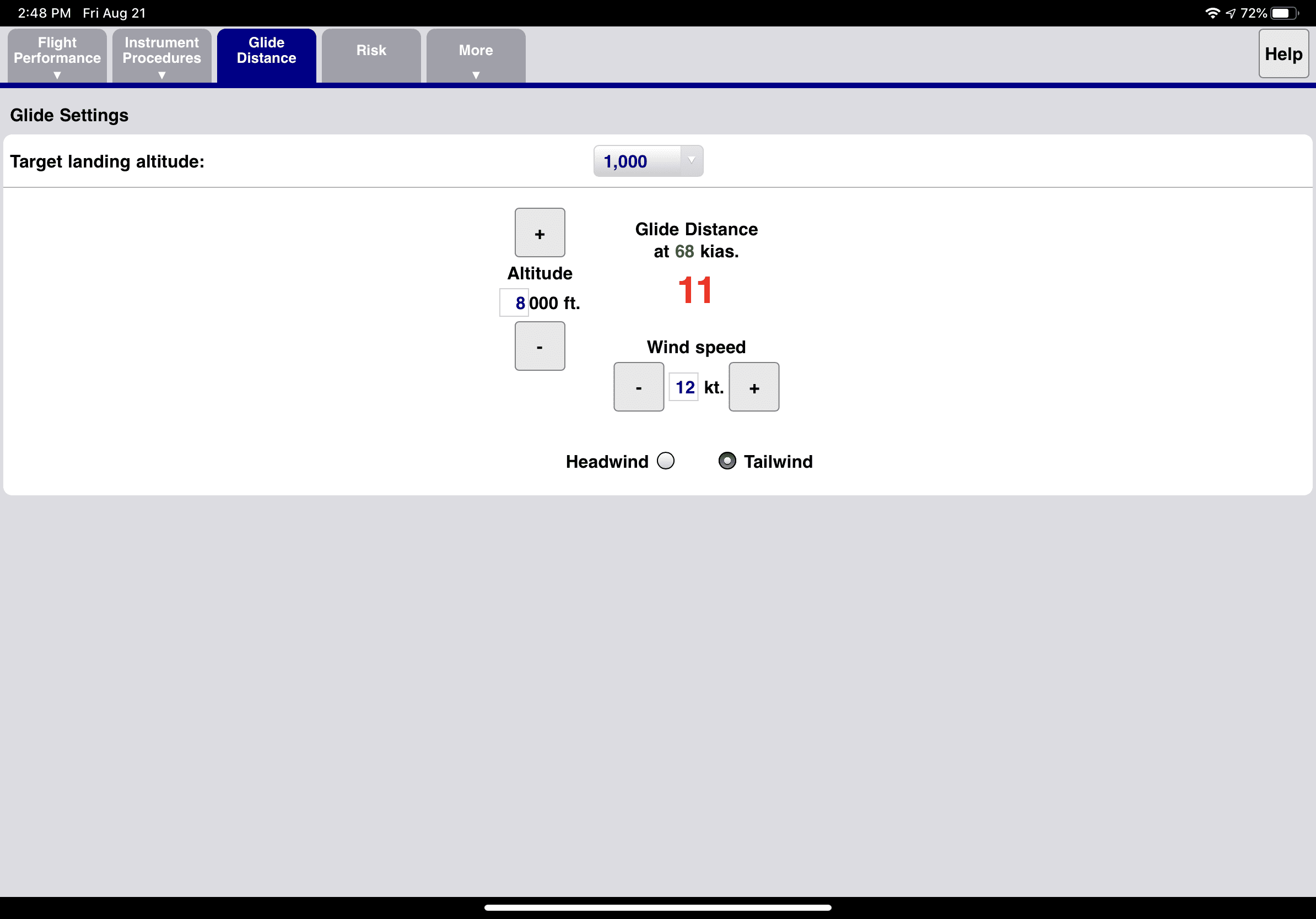 There’s also a Radar Performance app, which shows the geometry of your radar beam with respect to the ground and freezing level.