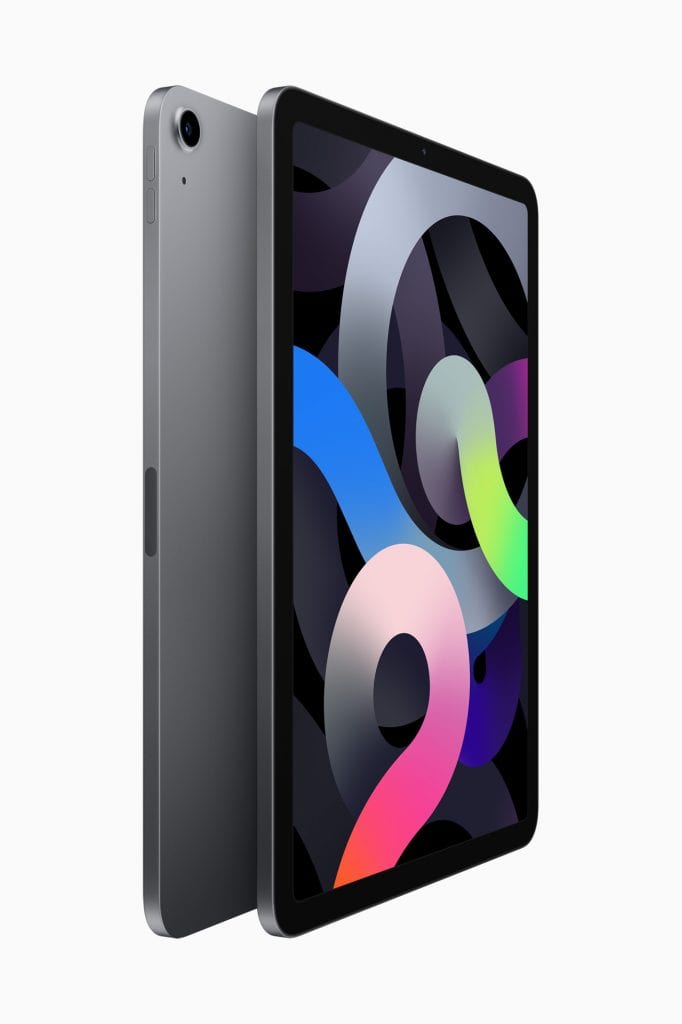 The other big announcement at the event was that iOS 14 would be released to the public immediately, to the surprise of many. As of today, iOS and iPadOS 14 are now available as a free update for compatible devices, but as with each major iOS update, there are several things you should consider before updating.

iOS and iPadOS 14 are compatible with the following devices:

You’ll find that this update installs pretty quickly, thanks in part to the smaller file size of the download (approximately 2.0 to 2.5 GB depending on your device). This is good news too for those that don’t have much free space on their iPad, eliminating the need to temporarily delete apps or aviation chart databases to make room for the update.

When iOS 13 was released last year, Apple split the operating systems for iPhone and iPad and introduced iPadOS 13 as a standalone operating system for the larger tablet. This made sense, as the iPad already incorporated features unavailable on the iPhone, like split-screen multitasking and the app dock. They also added the ability to add app widgets to the left side of the iPad’s home screen to make better use of the extra real estate there. A central focus of iPadOS was to treat the iPad more like a computer, as evidenced by Apple adding support for trackpads and a mouse to the iPad earlier this year.

This year Apple went in the opposite direction with iOS 14, primarily focusing on new features and display layouts for the iPhone. This makes sense, as the size of the larger iPhone screens are closing in on the size of an iPad mini and the home screen layout of apps hasn’t changed much since the original iPhone.

Here’s a quick rundown of the major features you can expect to see in iOS 14 and iPadOS 14.

iPhone Widgets on the home screen

Widgets have been available on the iPhone for several years now, but many users overlooked them since they require swiping away from the screen to view. iOS 14 changes this and allows you to place widgets right on the home screen with your apps. The new widgets present timely information at a glance and can be pinned in different sizes on any Home Screen page. Users can create a Smart Stack of widgets, which uses on-device intelligence to surface the right widget based on time, location, and activity.

Home Screen pages can display widgets that are customized for work, travel, sports, entertainment, and other areas of interest, and if you’re into sports, you can go to sites as this slot online to do some gambling here. So for example you might have all your aviation apps organized on one screen, with a few widgets at the top showing the latest METAR for your home airport, and another showing your recency of experience using data from your digital logbook. It will be interesting to see how aviation app developers support this feature. 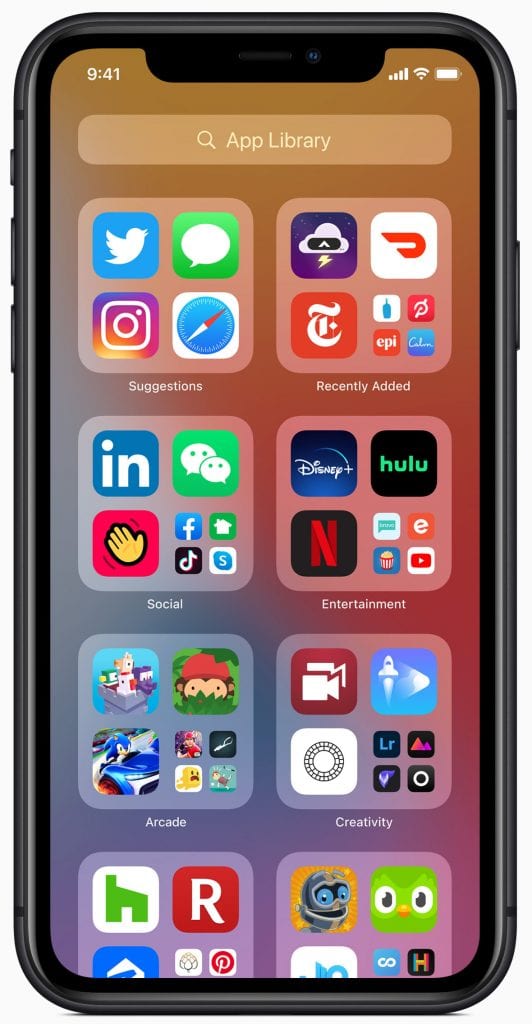 The home screen layout on iPhone hasn’t changed much since Steve Jobs introduced the first iPhone in 2007. The most notable improvement was the folder concept introduced in iOS 4, but the reality is most people still have many pages of disorganized apps on their devices (we speak from experience—past the second page it’s all forgotten).

With iOS 14, Apple introduced a concept called App Library. This alternate view automatically organizes all of your apps into one simple, easy‑to‑navigate view. Apps are sorted by category and your most-used apps are always just one tap away. Think of them as smart folders which track your usage and make it easier to get to the apps you use most often, without having to manually sort and drag apps from screen to screen as you do now.

App Library is only for the iPhone, so you won’t see this feature on your iPad. 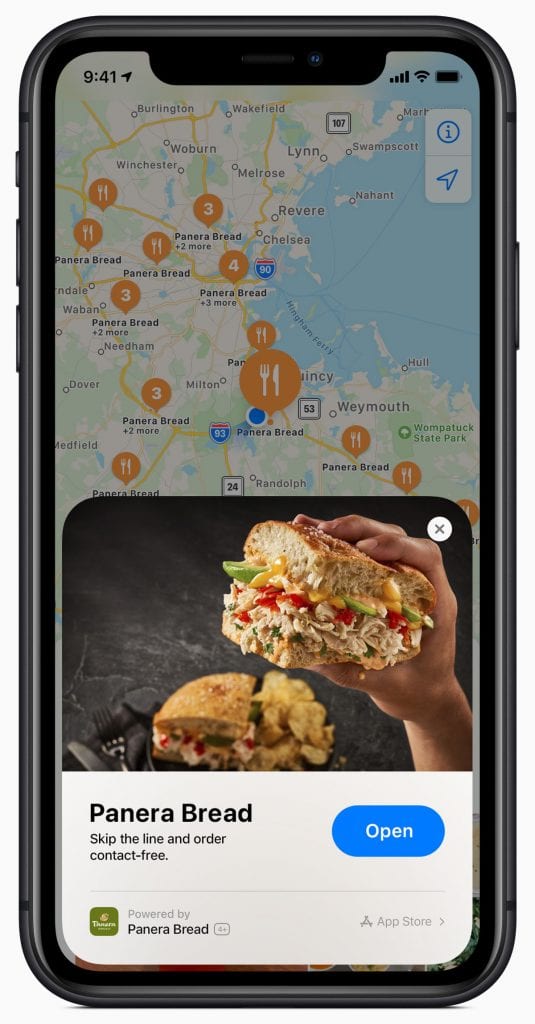 An App Clip is a small part of an app that is designed to be discovered the moment it is needed. It essentially allows you to access a particular functionality of an app, without needing to download and install the entire app.

App Clips are associated with a particular product or business, and load within seconds to complete a specific task, such as ordering takeout or filling up the car with gas. They can be easily discovered and accessed by scanning a new Apple-designed App Clip code, or through NFC tags and QR codes, or shared in Messages or from Safari, all with the security and privacy expected from apps.

It may take a month or two before App Clips are available for your favorite apps, as each developer must add this functionality separately.

Now users can choose to share their approximate location with app developers rather than their precise location when granting an app location access, and get even more transparency into an app’s use of the microphone and camera.

The Weather app keeps users up to date on severe weather events, and a new next-hour precipitation chart shows minute-by-minute precipitation when rain is in the forecast.

Video Picture-in-Picture and other improvements

iPad users have enjoyed the ability to display videos in a smaller picture-in-picture window for several years now, and this feature is now available for iPhone. This is great for pilots reviewing ForeFlight or pilot training videos while interacting with aviation apps and charts.

There is also a wide variety of improvements to the Messages app, new emojis, Siri updates, Maps improvements, language translations and updates to privacy, but you likely won’t find any of these changing the way you use your iPad or iPhone in the cockpit.

There is also a new feature which allows car manufacturers to allow iPhone users to unlock their car doors using their iPhone. Maybe Cirrus will incorporate the iOS Car Key into 2021 models—those SR22 wireless key fobs always seem to get in the way.

One small thing we really like is a change to the display of incoming call notifications, which display in a compact design at the top of the screen and allow you to continue multitasking if needed.

So what can iPad pilots look for after installing iPad OS 14? Not much really, but there are a few changes to point out:

Sidebar navigation layout – Apple redesigned their native apps, including Photos, Files, Notes, Calendar, and Apple Music, to use a sidebar menu to simplify operations in the app, instead of relying on buttons across the top and bottom of the screen. 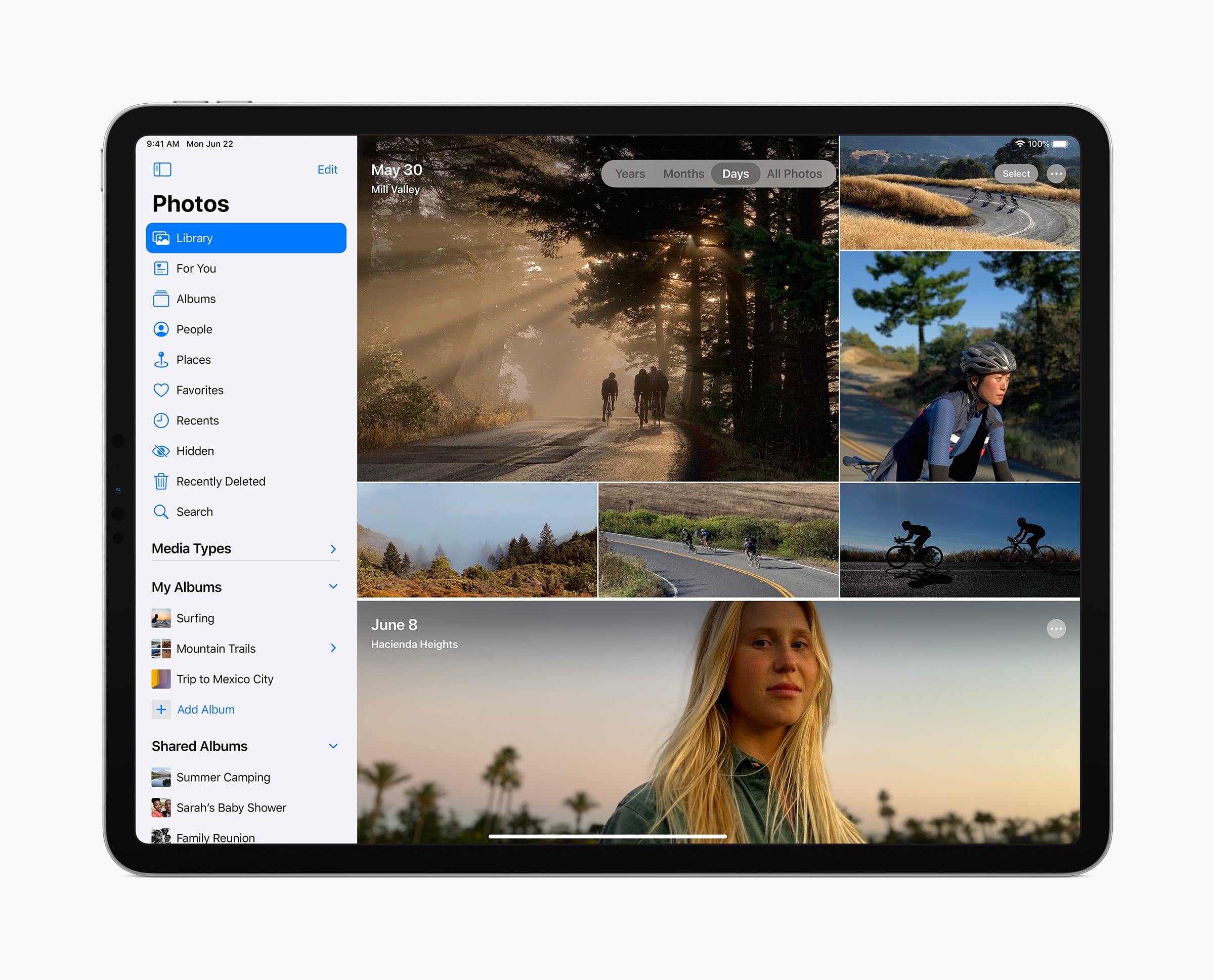 Redesigned Widgets – Like on the iPhone, Today View widgets have been redesigned to show you more information right from the Home Screen. You can choose among different sizes or add a Smart Stack of widgets, which uses on-device intelligence to show different widgets at different times of the day or location, based on your usage habits.

Spotlight Search – the search function has been redesigned and uses a light, compact floating window accessible from any screen or app and is the one place to quickly find anything, from locating and launching apps to accessing contacts, files, and quick information, to getting answers to common questions about people or places. Mac computer users will see a familiar resemblance to the same Spotlight Search feature on Apple computers. 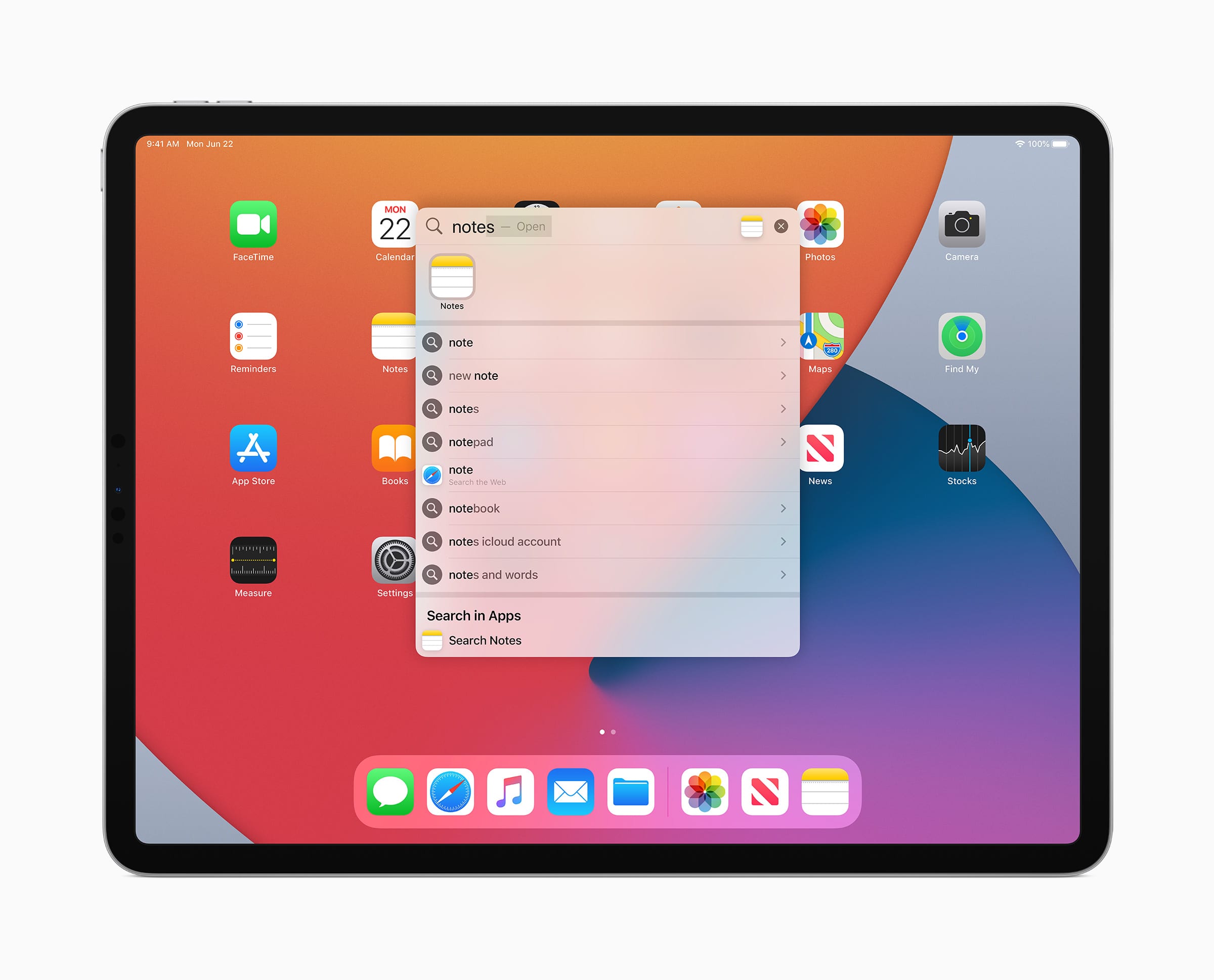 Scribble to Text—iPadOS 14 brings Scribble to iPad with Apple Pencil, allowing users to write in any text field—where it will automatically be converted to typed text—making actions like replying to an iMessage or searching in Safari fast and easy. This could make for a better in-cockpit experience when copying clearances and other in-flight notes. 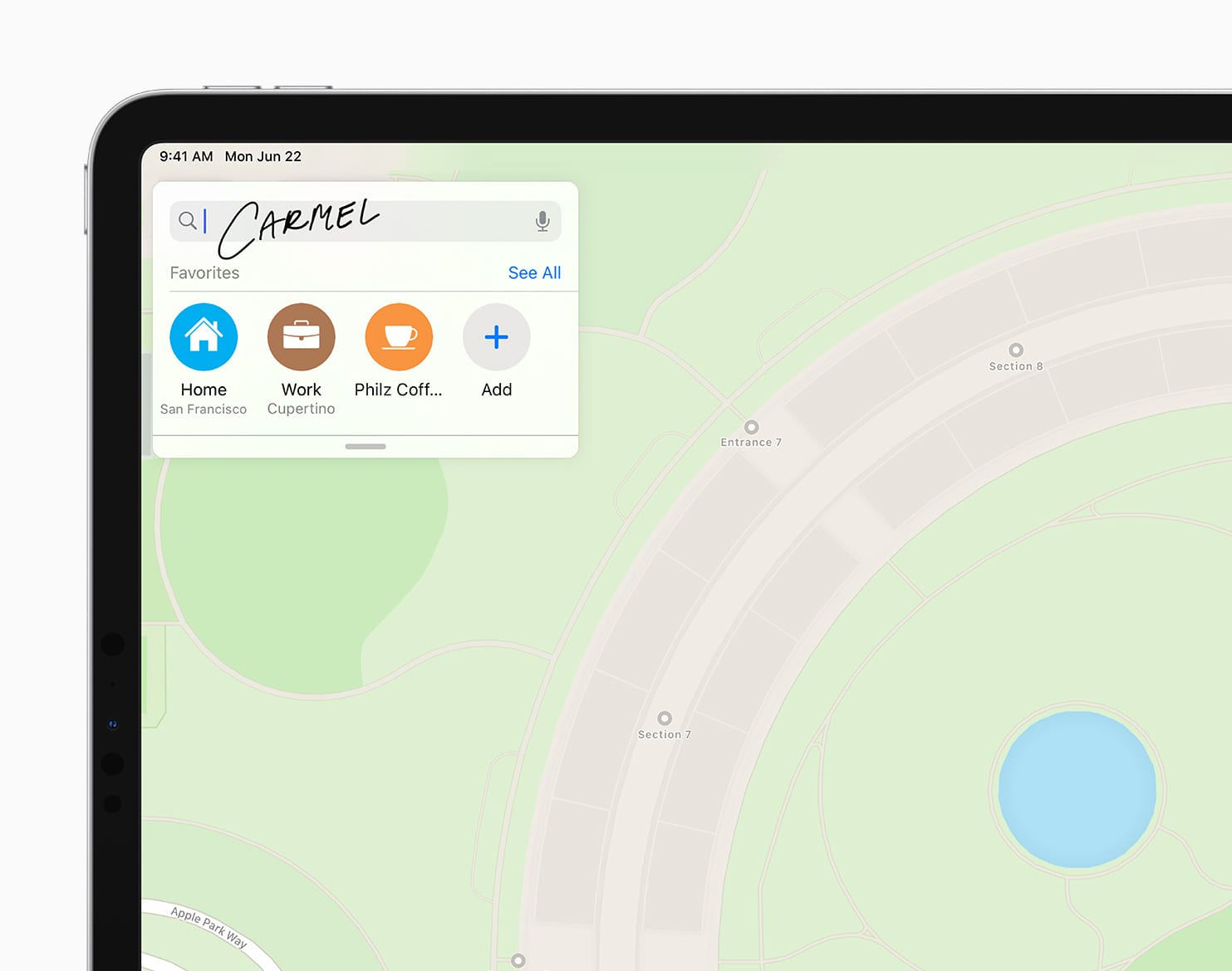 Check out Apple’s iOS 14 website for more information on all the new features.