Ten years ago, Apple released the iPad and fundamentally changed cockpit technology for most general aviation pilots. The next major hardware wave came a few years later in the form of ADS-B receivers, which built on the success of the iPad and offered subscription-free weather, GPS, and backup attitude. Since then, many pilots have been wondering what the next big thing would be. Smart watches are popular, but have been much more useful for fitness than aviation, and most major aviation app developers have abandoned the Apple Watch.

What about heads-up displays (HUDs)? These have been used for decades on military and airline aircraft and offer significant benefits, especially for takeoff and landing. Pilots can monitor attitude, airspeed, and angle of attack while searching for the runway or a potential traffic conflict. Might a less expensive HUD be the next addition to the electronic flight bag world?

We’ve been flying with various HUD ideas for years now, and our short answer is: not yet. Here’s why.

There are plenty of options for using a HUD in the cockpit, with prices ranging from under $10 to well over $100,000. On the low end, we have tried an app called (somewhat confusingly) Learn to Fly: Heads Up Display. This app costs only $9.99, and uses your phone’s camera and GPS to provide some basic information in flight. Simply mount your phone (or iPad, although we found that to be much too big) to the dash using a suction cup or claw mount, then open the app.

The app uses the phone’s camera to present a live view out the front of the airplane, plus current altitude, speed, and vertical speed. This is somewhat helpful, but remember this is all GPS data so you’re looking at groundspeed, not indicated airspeed, and it won’t help you avoid a stall. The app has some clever tools to compensate for this shortcoming, like the ability to enter your headwind component and compute a rough adjustment to groundspeed. For altitude, you can zero the altitude before takeoff, then view an estimated altitude above ground level (AGL) during flight. This works, but if your destination airport is not the same as your departure, it’s of limited value. 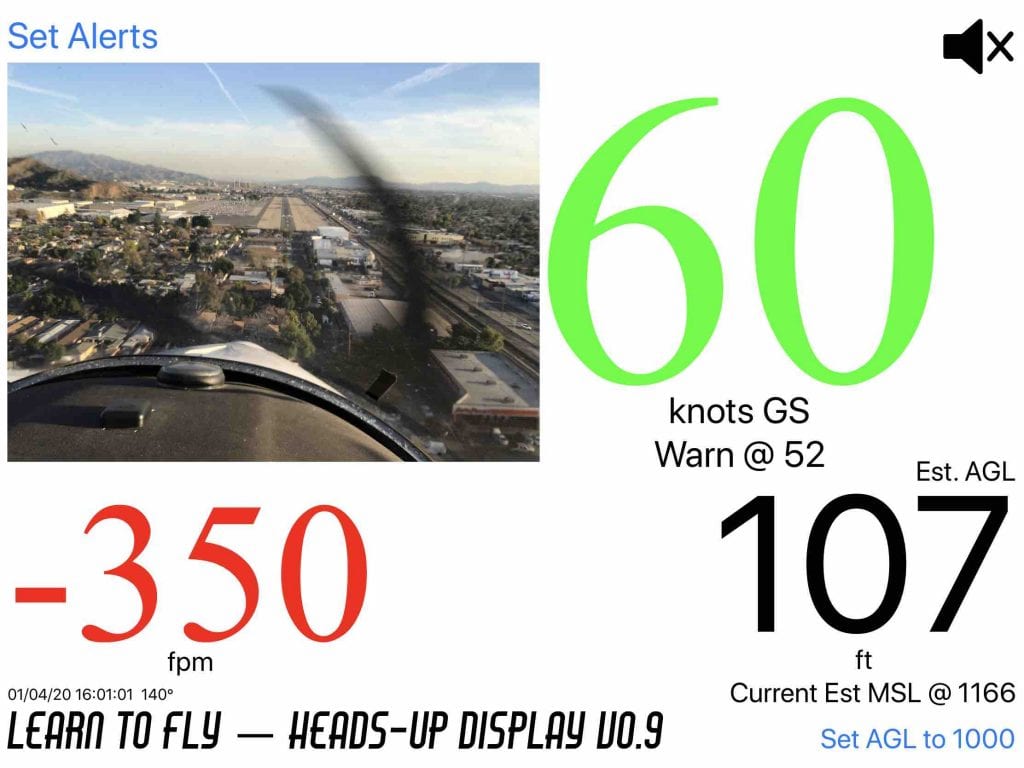 The app can provide audio alerts if you’re too slow, but we found the most useful tool to be screen recording. This option, enabled from Control Center on your phone, keeps a recording of everything on the screen. This allows you to play back your training flight during a debriefing session, complete with speed, altitude and sink rate. This can help when evaluating landings or air work, sort of like a poor man’s GoPro. Learn to Fly: Heads Up Display works, but it’s pretty basic and it’s easy to get distracted in flight. For $9.99 it might be worth playing around with for student pilots, but it’s not something we would use regularly.

Slightly more expensive is the Cell Phone Reflector HUD. This is essentially a lightweight mirror that reflects anything on your cell phone screen. With the right app, like Appareo’s Stratus Horizon Pro, you can get a usable picture of attitude and speed. At only $19.99, it’s an affordable and totally portable option, but as we noted in a recent product review, it’s hardly a true HUD. You end up looking at the display, not through it. It’s also very dependent on the app, since it requires a mirrored display to show up properly. Again, for such a low price it’s worth experimenting with and it offers something of a backup, but it’s fairly limited. 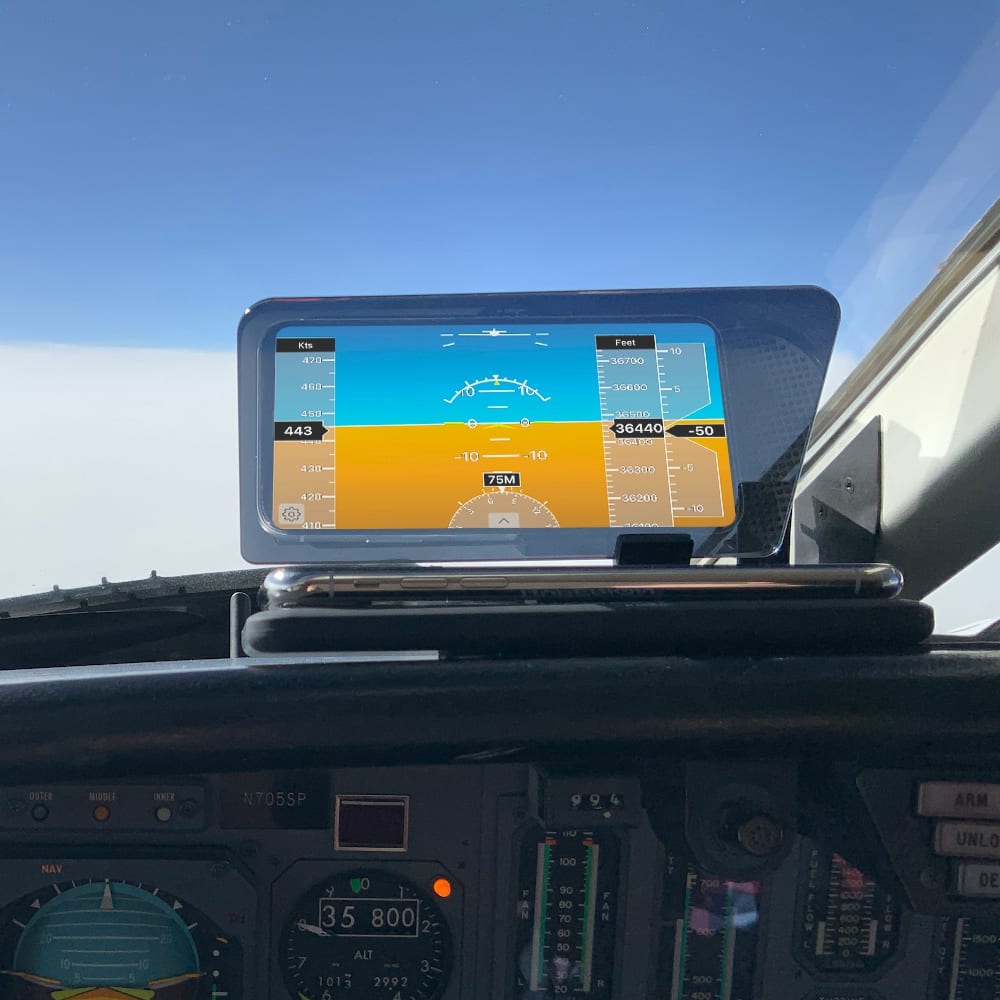 The least expensive HUD that offers its own screen is the Dual Avionics XHUD1000, from the company that makes popular external iPad GPSs and ADS-B receivers. When paired with an XGPS190 or Stratus 3 ADS-B receiver, this portable screen can display backup attitude, GPS groundspeed, and GPS altitude. There’s also a traffic display, but in the form of a 2D radar display, not a synthetic vision view. 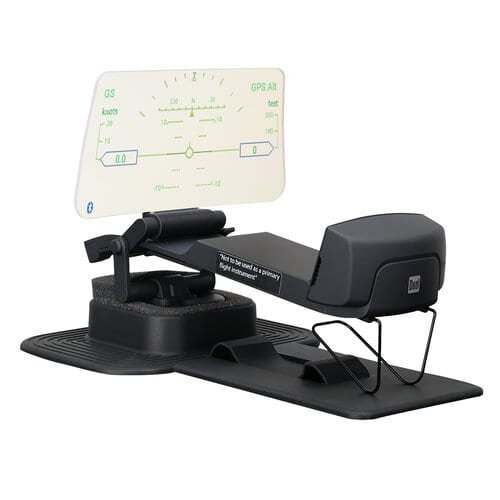 The XHUD1000 packs a good amount of performance into a reasonably-priced product, but it’s still pretty bulky (over 6″ deep) and requires a wire to hang down from your dash to the cigarette lighter plug or a battery pack. Setup also takes some work. In a typical scenario, you’ll pair the XGPS190 to the HUD and your iPad, then pair the HUD to your tablet as well. Once you know what you’re doing it isn’t too hard, but the first time is not intuitive. This was a common problem among all the HUDs we tested.

Stepping up the price scale a bit more finds the Epic Eagle, a portable HUD from Epic Optix that sells for about $2000. The main selling point here is resolution; instead of a basic screen with green numbers, this is essentially an HD projector with a screen. It has outstanding brightness, too—you really can see it in bright sunlight. 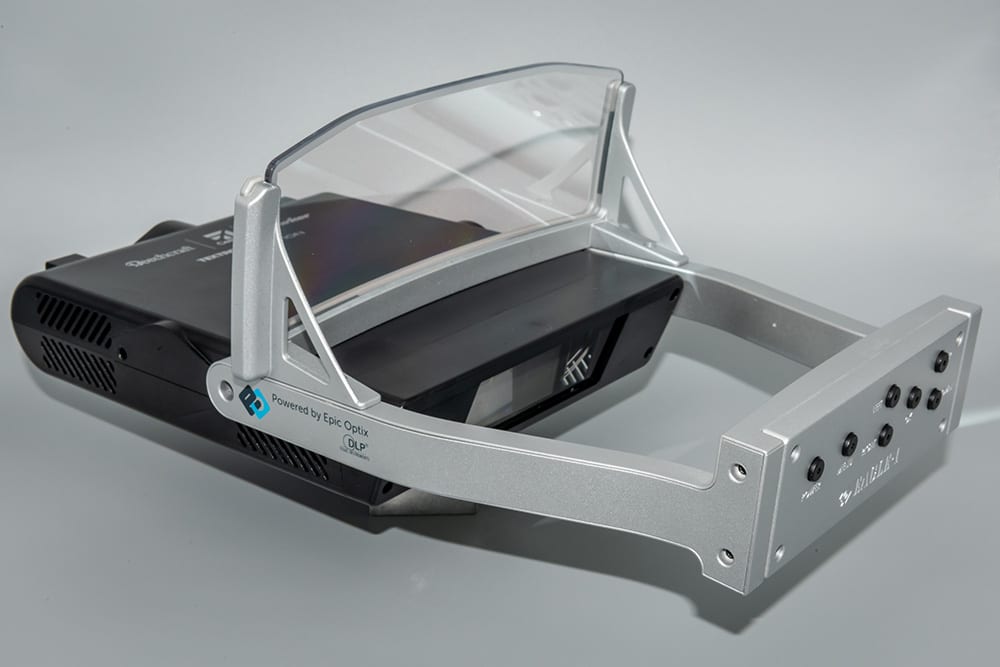 That performance comes at a cost, though. In our flight testing, we found the Epic Eagle to be quite intrusive. At over 12″ deep and almost 8″ wide, it won’t even fit on some smaller glare shields. It attaches to the dash with a RAM Mount, and while that should do a good job of keeping the HUD set in place, we have concerns about its safety in a crash since it hangs out in front of the edge. Like the XHUD1000, it requires a power cable.

Finally, the software is pretty clunky—it’s not a matter of turning it on and going flying. Even when you do have it set up, the main function is to display a screen mirror from your iPad. That means it works with a wide variety of apps, but it will not display a HUD-optimized screen. Synthetic vision in ForeFlight, for example, is more distracting than helpful. It’s just another screen, which made us think our iPhone would have done as well as an iPad backup.

So much for portable HUDs. The least expensive installed option is the MGF SkyDisplay. This is a much more integrated solution, since it’s permanently installed and can interface with the panel avionics. For example, it will show autopilot modes, V-speeds, and flight director cues. That adds a lot of very useful information, far beyond an iPad app. 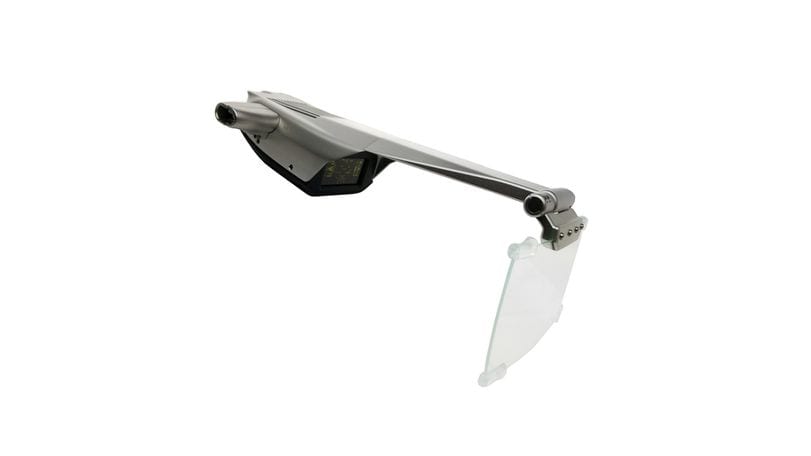 Of course that capability isn’t free: the SkyDisplay requires installation (via an STC) and raises the price significantly. The company is offering introductory positions for about $25,000. The HUD is also not a conformal display like you’d find on a Gulfstream. That is, there is no runway symbol aligned perfectly with the actual runway. This is a small detail but it matters; instead of the data seemingly attached to the real world in front of you, it seems to float somewhere in between. The SkyDisplay is more like a real HUD, but it’s not quite there.

For a no-compromise heads-up display, you’ll have to buy a new business jet. Citation Longitudes, for example, come with Garmin’s GHD 2100. This highly sophisticated screen has it all, including conformal attitude and flight path information—the key to making a HUD truly seamless. It will even adjust to changing lighting conditions automatically. In addition to a synthetic vision display, the GHD 2100 has full air data input, which allows it to display a flight path marker. This is the ultimate use for a HUD, since the symbols shows the pilot where the airplane is going; put the flight path marker on the runway end and the airplane will end up there.

We’ve seen this HUD in action in a simulator, and it’s impressive. The integration of master warning/caution annunciators is an unexpectedly helpful feature. Pilots can even apply to get reduced ILS landing minima with it. Price? About $25 million, but you get a nice jet wrapped around the HUD.

What do pilots want from a HUD?

Prices for HUD hardware are obviously all over the map, and so is performance. The top-of-the-line models found in business jets are impressive but totally unobtainable for most pilots. The least expensive options are fun to use but not very useful. In between, the tradeoffs between size, price, and features seem to be significant. Many of these products feel like demos or beta tester units, not highly polished avionics.

At the end of the day, the biggest limitation is not the displays. Whether it’s a phone or a mirror or a semi-transparent screen, there are options for displaying information in the pilot’s field of view. But what information is actually useful? 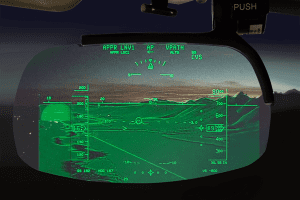 A true HUD has lots of valuable information, but requires serious integration with the airplane’s panel avionics.

AHRS data is valuable as a backup, and most ADS-B receivers can provide this information. In order not to distract from the view out the window, though, an attitude display needs to be optimized for a HUD and not just another iPad screen. That requires serious software integration, and maybe a more complicated HUD in the first place.

Traffic faces the same tradeoff. To be useful, traffic alerts should be displayed in a 3D synthetic vision view and based off aircraft heading. In order to provide that highly accurate view, the HUD needs access to pitot/static information, which is a level of integration that doesn’t make sense for most general aviation pilots.

In fact, that pitot/static information is one of the key missing pieces here. Indicated airspeed and indicated altitude are much more meaningful on short final than GPS groundspeed or altitude AGL. Angle of attack would be even better, but most light airplanes don’t have this sensor installed and the ones that do rarely share that information with other displays. That’s not to mention other data like glide range, annunciators, and autopilot modes. There’s a world of information that would be useful on a HUD, but it’s not accessible by all but the most sophisticated models.

So are HUDs the next big thing? Maybe some day, but there’s a lot of work to do before they show up on the dash of most 172s. For now, the most helpful heads-up technology may be the audio alerts you can get from your favorite app. Those require no new hardware and almost no setup.

Using your iPad on a Caribbean flying trip

How do different iPad models fit in an airplane?
Scroll to top