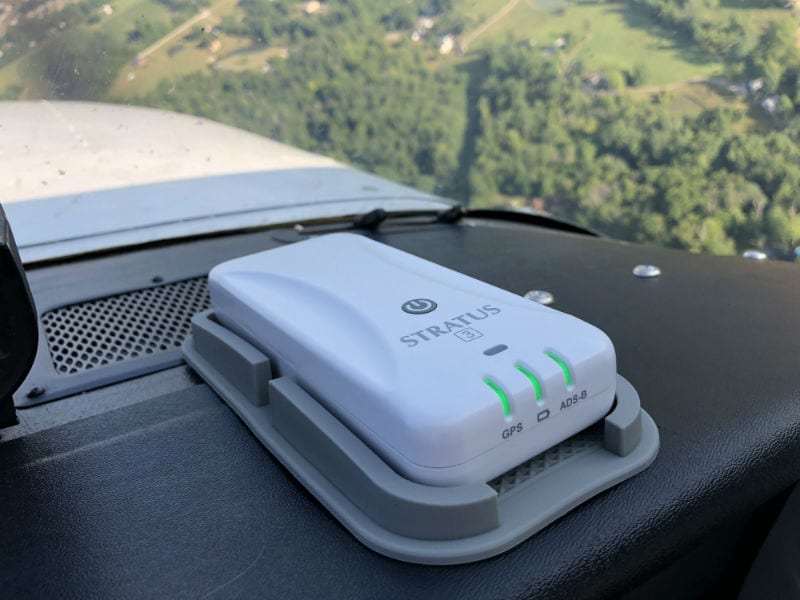 As ADS-B receivers have added features over the years, they have become much more than just weather receivers. The latest generation, including the Stratus 3 from Appareo, now offer subscription-free weather, traffic, GPS, backup attitude, pressure altitude and flight data recording. They are now all-in-one iPad companions.

As the feature list has grown, the options and settings list has also grown. In this post, we’ll walk through the various options for configuring your Stratus, so you can get the most out of your investment.

First, turn on Stratus and connect it to your iPad using the Settings app. Then open ForeFlight and tap the gear symbol at the top left of the Maps page. Scroll to the bottom of the pop-up menu and you can tap on Stratus Status. This page shows all kinds of information about the ADS-B receiver, including battery life, connection status, firmware, number of ADS-B towers and more. As you move to the bottom of the page, though, you’ll notice a variety of settings. Let’s explore each of these separately.

LED Brightness. Stratus has a built-in light sensor that automatically dims the three lights on the front of the device. However, you can manually adjust these at any time with this slider bar. It’s particularly handy for night flights – just slide the bar to the left for minimum. This is particularly helpful when Stratus is mounted in a place that makes it hard to reach.

Turn On When Plugged In. This is an under-appreciated feature that is particularly handy for homebuilders or aircraft owners. By selecting it on (it’s off by default), Stratus will turn on as soon as it receives power. It will turn off two minutes after power is removed – except when it detects that the aircraft is moving faster than five knots. This is a critical detail, as Stratus will stay on in case of a power failure, providing backup attitude and moving map. Under normal circumstances, Stratus will simply turn on when your airplane is powered up. This is perfect for pilots who want to semi-permanently wire Stratus into a power source, and mount the device out of the way (say, under the panel). If you’re a renter or don’t plug in Stratus regularly, you can leave this feature off. 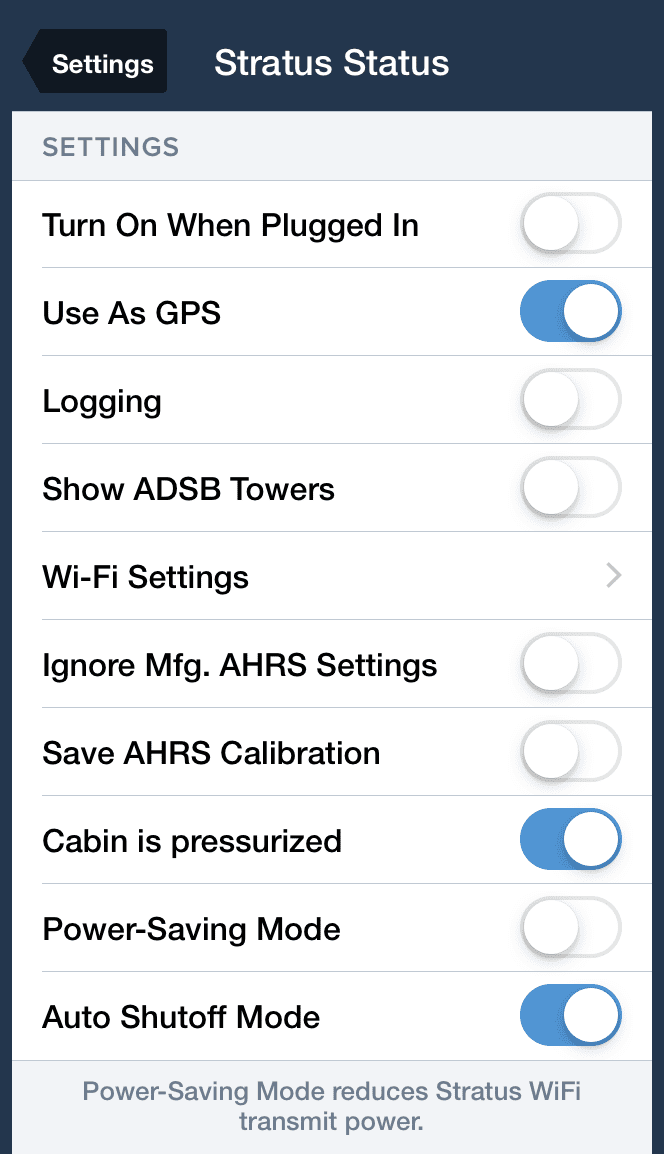 Use As GPS. This should almost always be set to on, since the highly accurate WAAS GPS in Stratus provides a position source that ForeFlight uses for moving map. However, under some rare circumstances, when weather and traffic are needed but not position, the GPS can be turned off.

Logging. This feature is used almost exclusively for troubleshooting, so it should be left off unless a support team member has asked you to turn it on. When on, the app will log all the information sent from Stratus to ForeFlight, which can take up a fair amount of space. Note: this setting is not track logging with the flight data recorder. That setting is covered in a separate area further down on the list.

Show ADSB Towers. If you want to see where the ground stations are that you’re receiving from, turn this option on then look at the moving map. You’ll see little white towers located on the map, complete with information about the strength of the signal you’re receiving from each tower. Most of the time this isn’t necessary, but it can be helpful in areas of marginal ADS-B coverage. 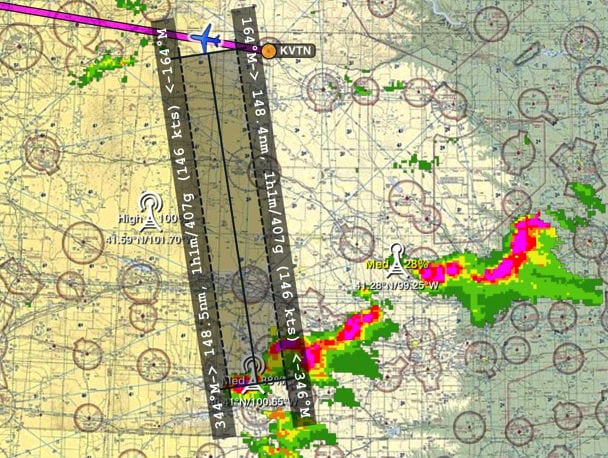 Wi-Fi Settings. This sub-menu allows you to hide the Stratus WiFi network (SSID Broadcast), or to add a password to the Stratus WiFi network (WPA2 Security Enabled). This can be useful for airline or military operations, when you don’t want passengers connecting to your Stratus, but can be ignored for most other flights. If in doubt, leave the SSID Broadcast on and the WPA2 Security off. 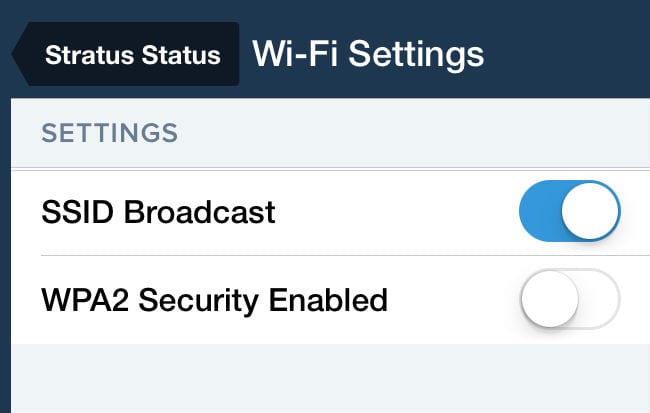 Ignore Mfg. AHRS Settings. This setting should be left off unless you’re experiencing a poor AHRS solution. When a Stratus device is manufactured the gyros in the AHRS module are calibrated and those values are saved. Those saved calibrations are used to initialize the AHRS solution during every power up sequence. In a small percentage of units (most likely due to being exposed to extreme temperature cycles) the gyros “drift” from the saved calibrations, so to remedy the offset in the actual vs saved gyro calibrations there is the option to “Calibrate on Power Up.” This will ignore the saved gyro calibrations and use live readings from the gyros. When the Ignore Mfg. AHRS Settings is enabled, it is important that the unit be turned on when stationary.

Save AHRS Calibration. For pilots who fly the same airplane every time – especially for tailwheel airplanes or other models where the pitch attitude is not level on the ground – this setting can be useful. It allows for the AHRS module to save a unique “straight and level” setting. For example, in a tailwheel airplane, if this option was enabled when a “straight and level” command was issued during flight (using the Calibrate feature in ForeFlight), Stratus would save the calibration angles so during the next flight the AHRS solution would be correct (vs pitching up 15 degrees). When “Save AHRS Calibration” is enabled it is important that Stratus have the same mounting orientation for all flights. If the orientation changes, then a new “Straight and Level” procedure would have to be completed.

Cabin is Pressurized. Stratus contains an internal barometric pressure sensor to drive the flight instruments and altitude alerts in ForeFlight. When flying a pressurized airplane, the pressure in the cabin is much lower than the actual aircraft altitude, leading to inaccurate readings on the digital flight instruments in ForeFlight. By enabling this switch, ForeFlight will leave the “Pressure Altitude” field blank on the maps page and only show an altitude value for the Cabin Pressure option.

Power-Saving Mode. Stratus communicates with your iPad via WiFi, but that WiFi signal can be set to different levels. In default mode (power-saving mode off), the WiFi output is quite strong so Stratus can be mounted practically anywhere in the airplane. If you typically fly with Stratus on the dash or the side window, you can turn power-saving mode on to reduce the WiFi power. This will improve battery life on Stratus, and we recommend it for most general aviation airplanes.

Auto Shutoff Mode. By default, Stratus 3 will automatically power off if no GPS lock has been achieved in 30 minutes or the aircraft is moving less than 5 knots for 30 minutes to prevent inadvertent battery drain. This is a great backstop in case you forget to push the power button after landing. Turning this switch to the off position will override this battery protection feature and you’ll have to manually turn it off after each flight..

Flight Data Recorder. The final section of the Stratus Status menu has three options for the integrated flight data recorder. The first option, Enabled, simply determines whether Stratus will record your flights or not. If enabled, the device will record your GPS position as well as pitch and roll attitude – up to approximately 20 hours. These logs are stored in Stratus, not your iPad, so they can be retrieved at any time in the future when you connect to the same Stratus. To see your previous track logs, tap the Track Logs line. From here you can tap the download arrow to move those logs into ForeFlight, or delete logs by tapping the Clear button at the top right. Finally, when Auto-Detect Segments is turned on, Stratus will use its built-in logic to determine when flights begin and end. Otherwise, flights begin at power-on and end with power-off. 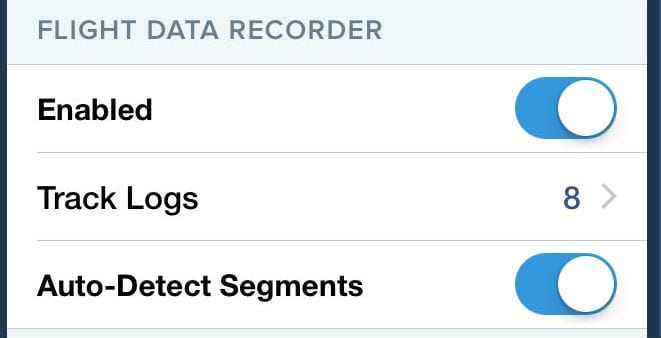 As you can see, there’s a lot going on in Stratus. For more tips on flying with one of these devices, check out this blog post.