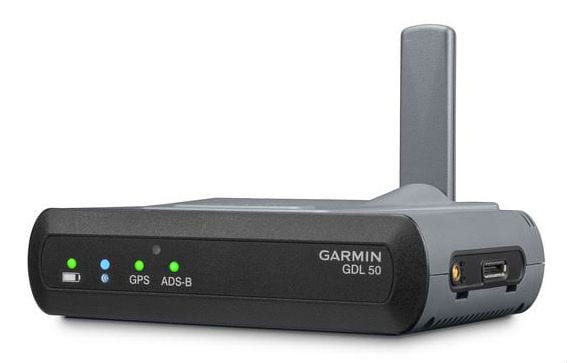 Garmin has introduced multiple portable weather receivers over the last six months, including the GDL 51 SiriusXM receiver and the combination GDL 52 SiriusXM/ADS-B receiver. Now the GDL family is complete, with the introduction of the GDL 50 – an ADS-B, GPS, AHRS unit with an 8-hour battery. That means you can now choose ADS-B weather, SiriusXM weather, or both, depending on your needs. 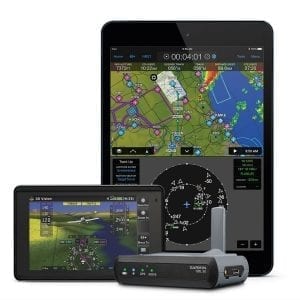 The GDL 50 can drive a tablet and a portable GPS simultaneously.

The GDL 50 has the same look and feel as the GDL 52, with a compact footprint that measures 4.75″ w x 3.25″d x 1.25″h. There’s a small flip-up antenna on the back for ADS-B, and our flight testing showed that it works well – we got excellent reception in southern Ohio, even at very low altitudes. It’s a dual band receiver, so you’ll see all the FIS-B weather products on 978 MHz (radar, METARs, TAFs, PIREPs, TFRs) plus ADS-B traffic on both 978 and 1090 MHz.

Traffic can be displayed on the main moving map page, or on a dedicated traffic screen (which can also be a split-screen option). Garmin has lots of sophisticated software to project the track of potential threats, making for the clearest traffic display we’ve seen. As a reminder though, ADS-B traffic is limited unless your airplane has an ADS-B Out transponder installed.

In addition to ADS-B, the GDL 50 includes a built-in GPS receiver to deliver precise moving map location, plus an attitude heading reference system (AHRS) to drive a synthetic vision display. The eight hour battery is a nice upgrade over older Garmin portables, and means you can fly wire-free for a whole day – this is an all-in-one box. There’s also some on-board storage, which allows the receiver to continually download the latest weather and traffic information, then transmit it to your tablet when the screen is turned on. That’s a small thing, but can really extend the battery life on your tablet.

To display all this information, the GDL 50 can wirelessly connect via Bluetooth to two devices at a time running the Garmin Pilot app. This means a pilot and co-pilot could view weather on two tablets at the same time, or a pilot could view it on tablet and a portable GPS for backup. The full list of compatible devices includes any iOS and Android device running Garmin Pilot, plus aera 795/796 and aera 660 GPSs. Older GPS models can be connected with a wire, available separately. 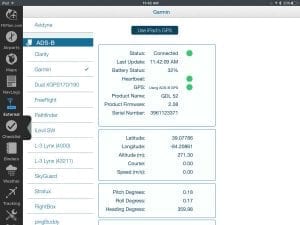 FltPlan Go can now connect some some Garmin avionics for ADS-B weather and traffic.

Secondly, FltPlan Go can now display ADS-B weather and traffic from multiple Garmin receivers, including the GTX 345, GDL 88/84, GDL 69, and GDL 52. This is limited for now (the GDL 50 isn’t officially supported, for example, and SiriusXM satellite weather isn’t available), but we expect the list of features and supported avionics to grow over time. It marks the expansion of Garmin’s Connext program, which added some ForeFlight support two years ago.

These new features are only available in the iOS version of the FltPlan Go app, although support in the Android version is expected at some point.

ForeFlight video tip: How to get a better weather briefing using ForeFlight...