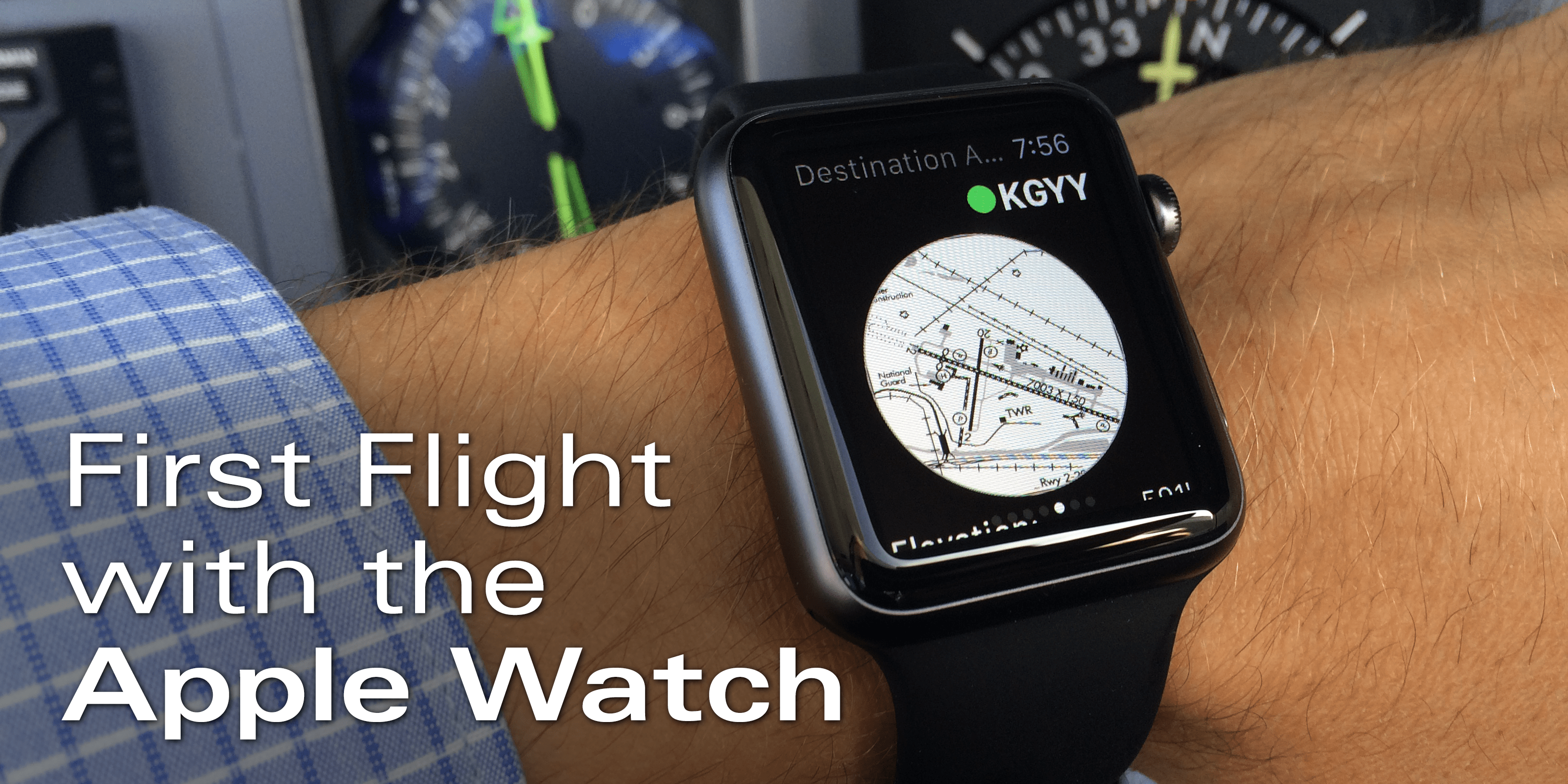 Our Apple Watch finally showed up last week, arriving 2 months after placing a pre-order on the April 10th launch date. We made the mistake of “sleeping in” till 3:30am that morning and placed the order 30 minutes after they went on sale–little did we know the most popular models would sell out in less than 20 minutes. We went with the basic black sport band and the 42mm face, which is the larger of the 2 screen sizes offered. After seeing both sizes, we’d recommend sticking with the larger screen size for a better viewing experience in the cockpit. 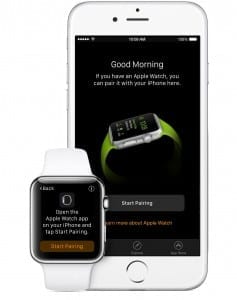 The watch must be paired and synced to an iPhone before you can use it.

Setting up the watch

To get started you’ll need to first pair the watch with an iPhone before using it. Currently the watch only works with iPhone and not an iPad at this time, but that may change down the road. During the setup process it’ll ask if you want to “Install Available Apps” on your watch–our recommendation here is to proceed with this option. This will install all compatible watch apps from your phone and save you the hassle of having to add each watch app manually.

While there are thousands of watch apps currently available in the app store, there are only a handful that are designed for pilots. Here’s a good roundup and overview of those currently available: Apple Watch Apps for Pilots. The nice thing is the dedicated Watch app on the iPhone allows you to browse and download only those apps that have a watch version available.

To use third-party apps you’ll need to keep your watch and iPhone near each other and paired at all times. The good news here is that this requirement is only temporary since a software update will be available in the Fall that will allow you to run apps natively on the watch. For now though when it comes time to go flying you’ll need to keep your iPhone nearby in the cockpit and leave Bluetooth enabled for your aviation watch apps to function. This was something that took a little adjustment for us, since we typically put the iPhone in an airplane mode and toss it in the flight bag before starting up.

Flying with the watch 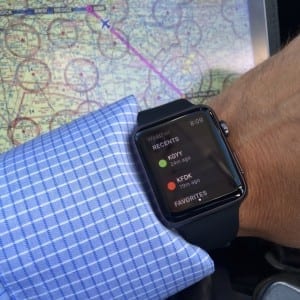 For this test flight we flew a twin-Cessna from Cincinnati, Ohio, to Gary, Indiana, which is just southeast of Chicago. We installed several aviation watch apps to test, including ForeFlight, AerovieReports and NRST. Of these three apps, pilots are probably most familiar with ForeFlight, which was one of the first aviation apps to offer watch compatibility. The ForeFlight app is fairly basic for now, and allows you to view a Flight Instrument display (groundspeed, ETA, etc.), flight timers and decoded METARs for your favorite and recently viewed airports on the iPhone.

When on the ground the weather data is fed automatically from your iPhone’s internet connection (cellular or wifi), and when in the air this information will update when your iPhone is connected to a Stratus ADS-B receiver. Fortunately everything is automatic on the ForeFlight watch app, which makes it a snap to quickly reference this information in flight without adding extra workload.

The next app we tried out was AerovieReports. This is a relatively new EFB app for iPhone and iPad and has been steadily adding new features over the past few years. It also offers the largest selection of information to display on the watch among the apps we tried out on this flight. Like ForeFlight you can view METARs and flight instruments, but it also offers dedicated airport information screens for your departure and destination airports.

This app uses a slightly smaller font size than the majority of watch apps, which allows you to view more information on the screen in a single glance. We actually preferred this over other apps (including Apple’s stock set of apps) since the high-resolution, bright screen makes it very easy to read the text. For example we found it useful to keep the destination airport frequency screen up on the watch to quickly reference ATIS and Ground control frequencies during the approach and landing. The airport information page also displays a small airport diagram, which proved useful when flying to a new airport with multiple runways. 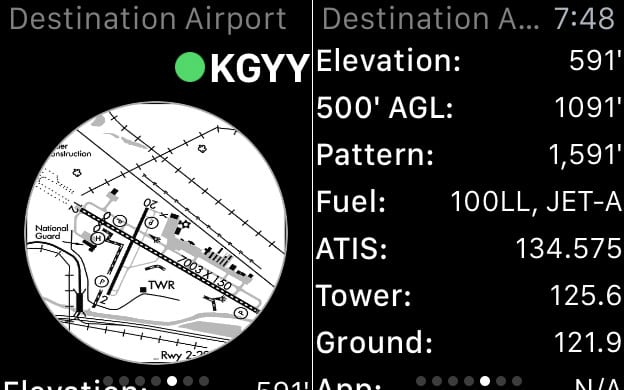 The last app we tried out is called NRST, which is an app dedicated to helping you navigate to nearby airports when in a crunch. Of the 3 apps we tried this had the most appeal to us, as the thought of having a real-time display of  nearby airports always in view on our wrist could be a real life-saver in an emergency. This app also features a layout using slightly smaller font sizes, which again helps to pack more information on a single screen on the watch face.

The default screen in the NRST app shows a list of the 4 nearest airports, with an arrow pointing to the relative direction and how many miles away it is from your present position. Tap on one of the listings to reveal an HSI instrument showing bearing to that airport and the vertical speed required to reach that airport. You can go a a step further and specify the criteria used to display nearest airports. You may only want to see airports listed with hard-surfaced runways over 2,000′ for example. 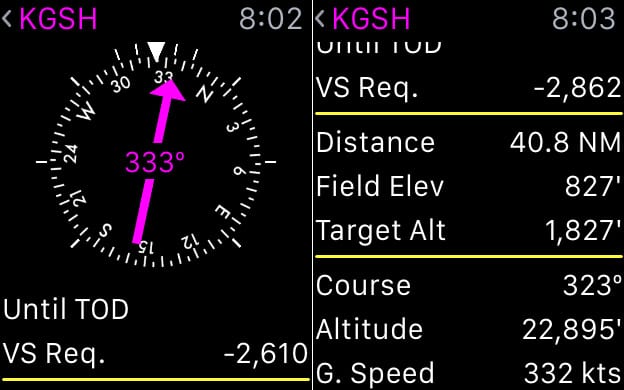 Tips for flying with the watch

Since you have to leave Bluetooth enabled and keep the watch connected to your iPhone to use these aviation apps, you’ll notice an increased battery drain on your phone. For this flight we used an iPhone 5S and started the day at 5am with a 100% charge. By the time we landed in Gary, IN, at 8:30am after a 60 minute flight the phone battery had dropped all the way down to 53%. Now part of this can be attributed to the fact we were using the iPhone’s built-in GPS during the flight, which increased battery usage. But the point is make sure to have a backup battery handy for your phone or access to charging throughout the day when flying with your phone and the watch. It’s worth noting too that during follow-up flight with an iPhone 6 the battery drain was not as pronounced.

The watch’s battery seemed to hold up fine over the course of the day, which included 2 flights and normal use for messaging and notifications. At the end of the day the watch battery was down to about 15%, so at least you can get a full day out of it without needing to charge it midday. Yes, you’ll need to get in the habit of charging it each night, but you’re probably doing that already with your iPhone. 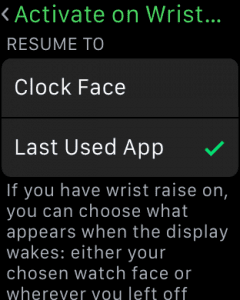 Consider changing this setting so that the watch always displays the last opened app instead of the clock face when raising your wrist.

To conserve battery life the watch will automatically turn off the screen when you lower your hand, or after a period of inactivity. Then the screen will then come back on automatically when it detects that you raise your wrist to view the watch screen again. The display though will default back to the clock face screen, which is what most people would want to see during normal use. In the airplane though this can get frustrating to have to continually load the aviation app you want to view after each period of inactivity. Fortunately there is a setting you can change to specify what the watch resumes to when you raise your wrist, called “Activate on Wrist Raise”. Choosing “Last Used App” solves this minor annoyance and allows your aviation app to always pop back up on the screen when you raise your wrist.

Just like with your iPhone or iPad, you can take screen shots at any time of the watch face for future reference. To do this you simply press the 2 side buttons simultaneously, and the screen will be saved in your iPhone Photos app. This is useful to grab some in-flight screens of your apps for later review on the ground.

One last handy feature is that you can use the watch as a remote to take pictures using your iPhone camera. It’ll display a preview of the viewfinder on the watch, and you can then snap the photo right from the watch. This can be useful when you mount your iPhone to record out a front or side window.

Overall the Apple Watch is pretty impressive for a first-generation device, especially from a pilot’s point of view. While we mainly focused on the aviation uses of the watch here, it does many more things that you’ll find worthwhile. It’s an excellent running and fitness tracker and includes a built-in heart rate monitor. You can store music on it for playback when you don’t have your phone nearby (requires wireless headphones), or use it to monitor real-time notifications, like sports scores or severe weather alerts.

Despite it having a small touchscreen, the display is easy to interact with and doesn’t take long to get the hang of. While there is a digital crown on the side you can use to scroll through screens, you’ll probably find it easier to just swipe up or down to scroll like you do on your iPad. At the end of the day the crown makes the device look and feel more like a watch than anything else. 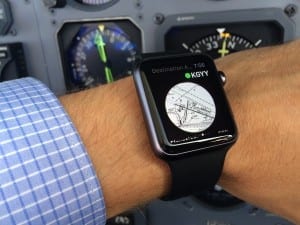 While the watch is more of a novelty for now, there is a lot of potential for it become an important alerting device in the cockpit.

The watch includes a feedback feature that sends a small vibration to get your attention when a notification or message comes in. This haptic feedback is currently only used by native Apple apps, but the next software release in the fall will allow developers to incorporate this pulse notification into third-party apps. There is some real potential here, as it’ll allow the watch to physically get your attention in noisy or busy environments like the airplane. Imagine ForeFlight extending their current set of notifications to the watch, causing it to vibrate to alert you when deviating from your course or altitude, when a potential traffic alert arises, when approaching an active runway on the ground, or when the cabin altitude rises rapidly in pressurized airplanes.

Our main takeaway from this flight is that the first generation Apple Watch and apps only scratch the surface of what’s possible with this new platform. As the processor, sensors and battery life improve, the user experience will also improve and some of the current drawbacks will fade away. And it was encouraging to hear last week at Apple’s developer conference that they are already working on version 2.0 of the watch OS software, which will be a free update available this fall and further expand the capabilities of the device.

So should you buy one? It can be tough to justify $400 on something you were able to live without up to this point, but the same thing can be said for rationalizing the purchase of an iPad back in 2010. If you like to have the latest gadgets and want to be able communicate and receive alerts without taking your phone out of your pocket, then the watch is for you. Our best advice is to go to an Apple store and play with one for a bit to see how you like the interface and included apps. If you find that you like it for normal use at home and when on the go, then you’ll love it in the airplane.