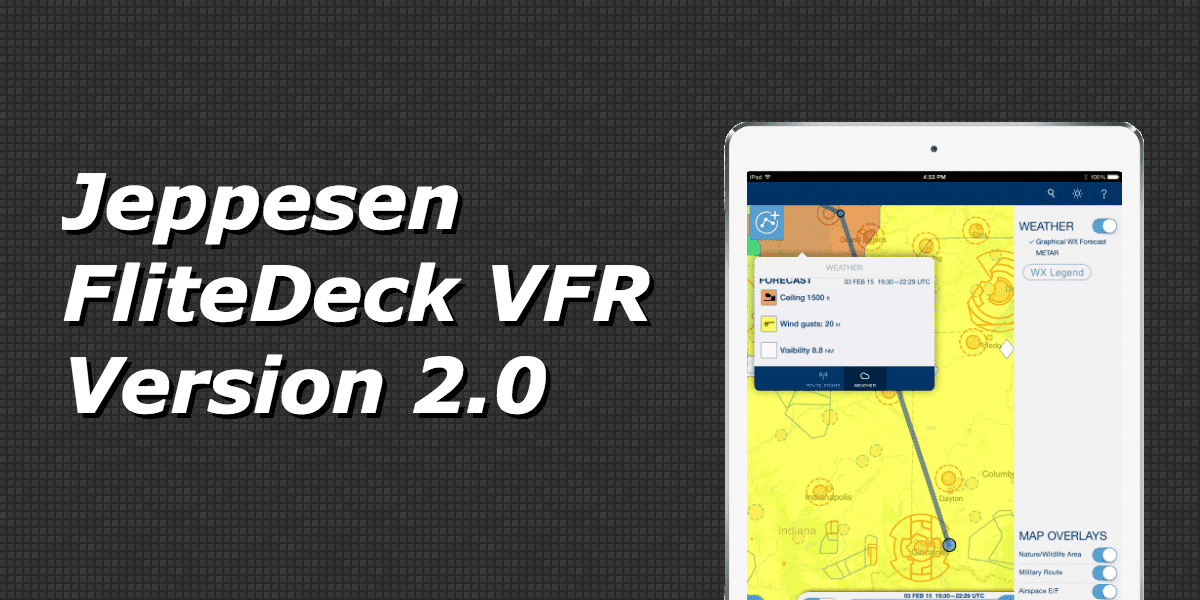 Jeppesen’s Mobile FliteDeck app has long been a popular choice for airline and business jet pilots. But while its high quality approach charts and vast international coverage make it the go-to app for professional pilots, Jeppesen has found limited success among private pilots and aircraft owners. They hope to change that with FliteDeck VFR, a scaled-down app that was announced last year and recently updated to version 2.0. Here’s what’s new.

FliteDeck VFR has always taken a different approach from traditional all-in-one apps like ForeFlight and WingX. The first difference is the charts. Whereas other apps use digital versions of FAA sectionals and low altitude en route charts, Jeppesen uses data-driven maps based on their VFR+GPS charts. These are similar to sectionals, but because they’re more than just an image, they can automatically scale and declutter. Zoom out and you see only the outlines of states and Class B airspace; zoom in and you see every airport and obstacle. Keep zooming and you will see a detailed taxiway diagram, including your airplane’s position on the airport. It makes for a more vibrant and more readable presentation of aviation information, and it’s all one map, so there’s no switching between screens.

Another difference is the app’s clearly defined “Planning” and “Go Flying” modes. You can plan a route, review weather and create a Nav Log in the Planning mode, then tap the Go Flying button at the bottom right corner of the screen. In Go Flying mode, the app accepts GPS input for moving map features, uses larger text in the Nav Log and adds a dedicated NRST button for finding the nearest airport.

The biggest upgrade with version 2.0 is a new system of graphical weather forecast overlays. These color-coded boxes warn of weather conditions that are potentially hazardous to VFR pilots, like high winds or low visibilities. Much more than just AIRMETs and METARs, these overlays use 3-hour forecast intervals to offer a more detailed and accurate picture of the weather. Areas are color-coded green, yellow and red for an easy at-a-glance view of conditions. It’s different from anything we’ve seen before, and after getting used to it we found it quite helpful.

It’s not perfect, though. For one, we wish there was an option to customize the alerts – a pilot in Kansas might not think 15 knot winds are anything to worry about, for example. There’s also no option to zoom out to a truly national scale. For flights longer than 300 miles, you’ll do a lot of panning to view the entire route.

Jeppesen does offer a helpful way to review winds in a graphical format. At the bottom, select the windsock instead of the clouds, then choose what altitude: surface, 5000 ft., 10,000 ft. or 15,000 ft. Wind barbs appear on the chart, and you can use the slider bar to see forecast conditions.

This brings up a final difference, and it cuts both ways. This is a basic app, aimed at VFR pilots who don’t want to be overwhelmed by features. That’s a good thing in many ways – apps are often stuffed with features that the average pilot will never use – but it also leaves this app feeling seriously limited. Don’t look for terrain alerts, synthetic vision, in-flight weather receiver options or weight and balance tools here. While some of those may be overkill for a basic app, we think a few of them are very important features for VFR pilots trying to avoid bad weather or obstacles. Most seriously, there is no way to view radar or satellite imagery during pre-flight planning. While warnings about low ceilings are nice, it’s even better if it’s backed up by a big picture view of the weather. This seems like a major missing piece.

Overall, the biggest complaint we have with the app is its speed. Tapping on buttons often resulted in a 3-4 second delay before the app responded. This was slightly frustrating on the ground; in flight it was downright confusing. While the app didn’t crash on us, it was consistently slow.

Mobile FliteDeck VFR is attractively priced at just $49/year, which includes charts for the entire continental US.

For pilots who need IFR charts too, Jeppesen offers their complete FliteDeck app. This starts at $299/year for full US coverage.

How much space do charts take on my iPad?

Which iPad mount is right for my airplane?
Scroll to top