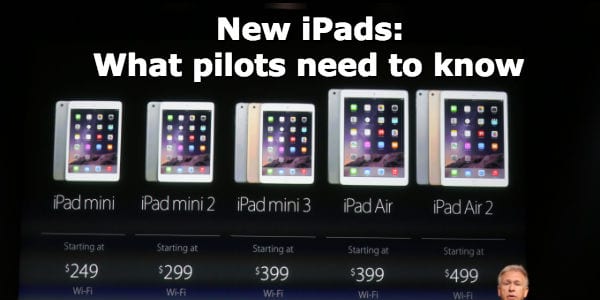 Just one month after unveiling the new iPhone 6 and 6 Plus, Apple held an event today to show off even more new gadgets–including the latest iPad models. While the upgrades are incremental improvements rather than revolutionary redesigns, there are some interesting new features (especially for pilots). The event covered more than just iPads, so let’s explore what’s new.

Apple now offers a wide range of tablets, starting at $249.

The big news was the launch of the iPad Air 2. This upgraded version of Apple’s 10″ tablet is 18% thinner than the previous iPad Air and includes the new A8X processor. The company claims this boosts performance by 40% over the previous iPad Air. The new Air 2 also adds TouchID, the fingerprint security system launched on the iPhone 6 last month. In addition to its use as a password, TouchID enables Apple Pay. This new payment process should eventually make it easier to make purchases, both in apps and online.

There’s also a built-in barometer, a new feature that was also added to the iPhone 6. There are some interesting possible uses for this in aviation apps (although none are available yet), so this could be a nice feature for pilots. Another interesting update is the screen: the Air 2 is made from a single laminated component, whereas previous models had two layers with air in between. This new construction, plus a new anti-reflective coating, supposedly reduces screen glare by 56%. This could be a huge feature for pilots, but we’ll have to fly with it to see how big of an improvement it is.

The iPad Air 2 has the same dimensions in width and height as the previous model, so it should fit existing kneeboards and mounts pretty well. Battery life is advertised at 10 hours, which seems to be an improvement over earlier iPad models.

In addition to the upgraded iPad Air, Apple also introduced the new iPad Mini 3. This is a smaller update than the Air, with the only significant change being the addition of TouchID. It still uses the A7 chip (not the faster A8X chip in the Air 2), so there’s not a performance upgrade. There’s also no mention of a barometer or anti-glare screen.

The previous generation iPad Mini (once called the “iPad Mini with Retina Display”) is now simply the iPad Mini 2, and it got a $100 price cut. The original iPad Mini (with a lower resolution screen) is also sticking around, and is just $249.

Which one to buy?

There are more options than ever from Apple:

Which one is best for pilots? While the $249 iPad Mini is a good deal, we would stay away from it. The lack of Retina screen is noticeable these days, and the speed will only become a bigger factor over time. In contrast, the iPad Mini 2 at $299 strikes us as a pretty good deal–it has all the features of the latest generation iPad Mini except for TouchID and it’s $100 less.

However, with this release, the iPad Air 2 may take the top spot among pilots. The addition of a faster chip, a low-glare screen and a barometer are compelling for cockpit use. We wouldn’t say it’s the only right answer, but it should get serious consideration for your next tablet.

Note that the iPad Mini 3 and Air 2 prices are the same as the previous generation (starting at $399 for the Mini and $499 for the Air), but the 32GB models have been replaced by 64GB models. That means you get double the storage space for the same price. Full details are available from Apple.

Apple also announced the availability of WatchKit, the software development kit for their new Apple Watch, in November. This means app developers will be able to start working on new software for the watch before it becomes available in early 2015. Will any aviation apps be ready for the launch? We’ll have to wait and see, but it seems like a good platform for aviation apps.

Finally, Apple showed of iOS 8.1, the latest version of the operating system that runs all iPads and iPhones. This update will be available Monday, October 20, and includes support for Apple Pay plus deeper iPhone-Mac integration.

There is no such thing as an “official weather briefing”

Use your iPhone 6 as a backup altimeter
Scroll to top