Blog - Latest News
You are here: Home1 / Apps2 / State of the app market 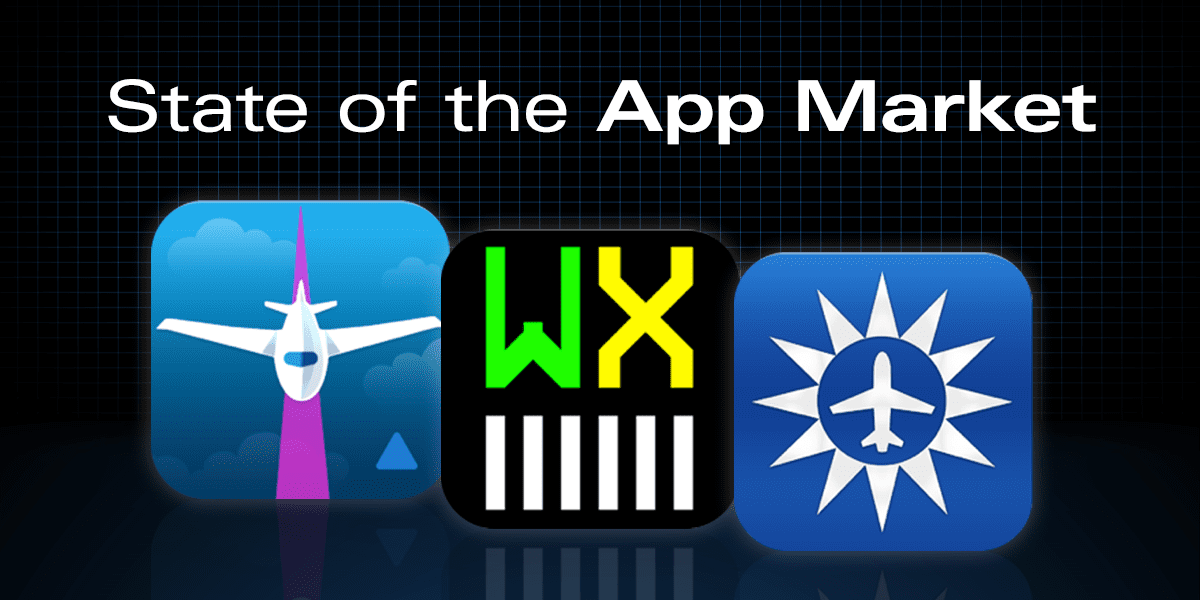 At iPad Pilot News, we often get asked for our sense of the aviation app market–who’s on top, who’s growing and who’s new. There are any number of ways to answer this question, and at the end of the day it doesn’t really matter. The “best app” for any one pilot is the app that matches the mission and is easy to understand. One size does not fit all.

But pilots always enjoy the horse race element of apps, partly because it’s such a fast-moving and dynamic part of the aviation marketplace. To offer a more detailed answer to the question, we have reviewed a number of resources to offer a snapshot of the aviation app market. The result is a ranking of apps based on popularity, not a discussion of features or customer reviews.

How to rank them

The only number that offers a clear look at the overall popularity of an app is the rank in terms of grossing–that is, how high did this app rank in terms of revenue generated in the app? While downloads can be tracked, that says more about the number of trial users than the number of paying subscribers. Likewise, rankings in particular categories are interesting, but do not offer an apples-to-apples comparison. Top grossing ranks every app in the App Store on one scale. It’s certainly not a perfect measure (some apps also sell subscriptions outside the App Store), but it’s a representative gauge.

To obtain these rankings, we went to AppAnnie, an independent app-tracking service, and reviewed the top four general aviation apps: ForeFlight Mobile, Garmin Pilot, WingX Pro7 and AOPA FlyQ EFB. There are certainly other apps available, but based on numerous surveys of pilots, we’ve found these four capture 95% or more of the GA market in the U.S.

The one clear answer from the numbers is that ForeFlight remains on top–in a dominant position, really. It’s consistently in the top 50 top grossing apps in the entire App Store. That puts it ahead of some very well-known apps, including Apple’s own Pages program. It has remained steady in this ranking for the past year or so, and over 150 spots ahead of the next closest aviation app. The graph below shows ForeFlight’s top grossing rank for the past 90 days.

The race for second is more interesting, and more competitive. 18 months ago, WingX was in firm control of second place, and the typical “Coke/Pepsi” discussion came down to ForeFlight and WingX. But since then, Garmin has come on strong, with a slew of new features and some serious marketing muscle. We’ve noticed more and more pilots using the app, and the top grossing charts prove it. Garmin Pilot is ahead of WingX on most days, hovering around the 200 rank overall.

WingX may have given a little ground to Garmin, but this app still has a solid following. The rankings below could be inflated (slightly) by the fact that WingX actually charges 99 cents to download the app, whereas the other apps are free to download but then require in-app purchases. Regardless, WingX bounces around the 200-300 rank overall.

ForeFlight, Garmin and WingX are definitely the big three apps in aviation. We’ve seen some interest in AOPA’s FlyQ EFB app lately, so we looked up its rankings. In short, it doesn’t seem to have too much traction. While it ranks well in the Navigation category, it has not made the top 500 grossing apps in the overall App Store.

Jeppesen is harder to track, since its apps are free to download and require a separate subscription (sold outside the app). But based on recent surveys, both in person and online, its apps are used mostly by airline pilots and some jet operators. It’s the only option for charts in many parts of the world, but for piston airplane pilots, it hasn’t caught on.

Why is ForeFlight on top? There are plenty of plausible reasons. As one of the earliest aviation apps, it was the first app many pilots tried. Having become familiar with the app, these pilots may view switching as a hassle. Others point to the word of mouth effect or the app’s ease of use. Regardless, nothing is guaranteed in the app world, and ForeFlight will have to work hard to stay on top. There are plenty of apps coming after it, with Garmin Pilot and WingX particularly strong challengers.

Beyond the specific rankings here, it’s remarkable how many aviation apps rank so highly. The App Store is absolutely huge, with over 1 million apps available. Compared to many other industries represented in the store, aviation is tiny. And while the price of aviation apps may be higher than the average $1.99 game, these high rankings for the big three apps are a powerful sign of how popular the iPad has become in aviation. Apple is surely taking notice.