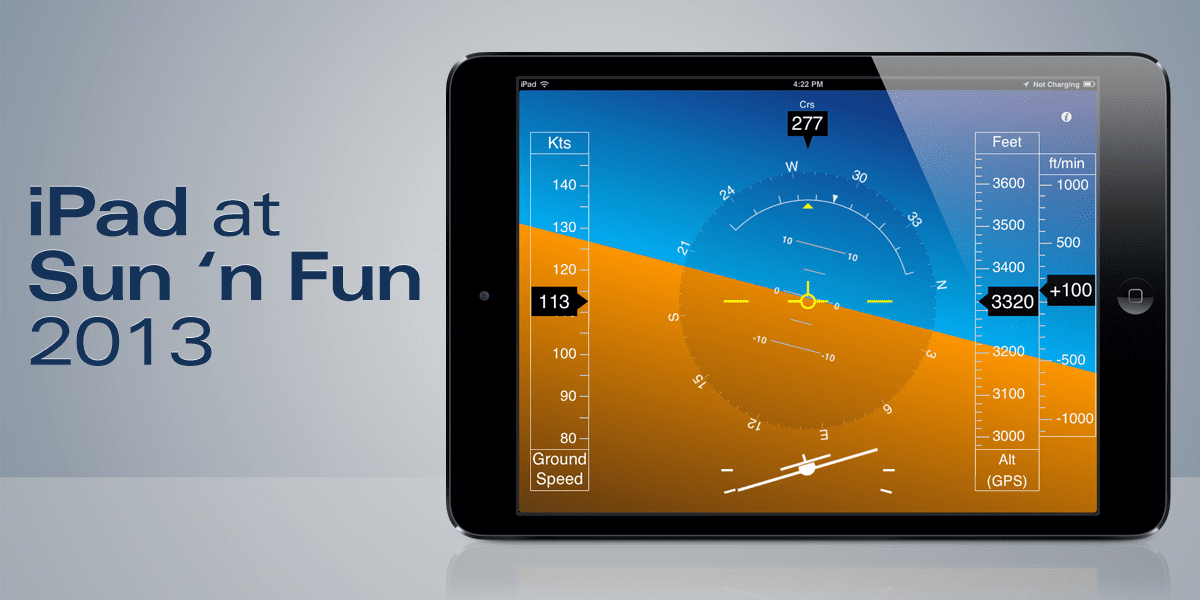 The 2013 edition of the Sun ‘n Fun Fly-in is now in the books, and as usual there were plenty of new product announcements. No part of the show was hotter than iPad apps and accessories, so let’s review some of the major stories at the show:

For the second straight year, ADS-B receivers dominated the show, with a number of enhancements and new products on display. Progress in this area has been nothing short of stunning: two years ago these devices hardly existed; today they are the must-have accessory for iPad pilots.

The biggest news was the introduction of an all-new Stratus from Appareo, ForeFlight and Sporty’s. The original Stratus popularized the concept of a portable ADS-B receiver, and went on to become the best selling model in aviation. The second generation Stratus, announced just one year after the first, adds dual band ADS-B traffic and a built-in AHRS. The case is 30% smaller than the original, and the companies claim increased reception as well. More information is available at Sporty’s.

Stratus 2 wasn’t the only news from Appareo, though. The company also announced that Stratus 1 will soon add single band ADS-B traffic to its list of features, via a free firmware update. The feature will be enabled in ForeFlight version 5.1, which should be available later this month. The price of Stratus 1 has also been reduced to $699, making it one of the least expensive ADS-B receivers on the market.

Sagetech also joined the ADS-B party, announcing that its Clarity receiver has begun shipping. The $1,150 Clarity includes ADS-B weather, dual band traffic and GPS, while the $1,400 Clarity SV adds AHRS for a synthetic vision display. Both models include an internal battery and antenna, and feature Data-Burst Technology that buffers data while the iPad screen is off. Clarity works with WingX Pro7, Global Nav Source, SkyVision Xtreme and the iFly 700 GPSs.

Levil Technology also showed off its new iLevil series of ADS-B receivers, including the iLevil SW. This self-contained unit receives ADS-B weather and GPS, and communicates to iPads via WiFi. Levil has been an early leader in portable attitude heading and reference systems, and this unit does include a built-in AHRS. One of the more unique features of the iLevil SW is its built-in solar panel, which helps to recharge the battery in flight. The iLevil SW is shipping now, and costs $1,195.

Beyond the hardware, a number of app developers released updates to their products–some of them fairly significant. The overall theme in the software side of the fence is that an arms race has broken out, with companies adding sophisticated new features faster than ever. Gone are the single person developers writing code in their spare time. Instead, it’s an industry dominated by large or growing companies with experienced teams.

ForeFlight showed off version 5.0, which includes track-up moving map, extended runway centerlines, a unique Traffic Pattern Advisor and more. For Pro level subscribers, ForeFlight also introduced its Hazard Advisor, which offers a detailed terrain warning system including color-coded maps and pop-up alerts. The company also announced that it will soon support ADS-B traffic, with the release of version 5.1 in late April. The app will integrate with both Stratus ADS-B Receivers to create its TrafficTrend display, including relative altitude, vertical trend, speed and direction of flight.

Avionics giant Garmin released a big update to its Pilot app just days before the show. Version 5.0 adds a new data-driven map layer, track up, cloud syncing and more. The data-driven maps–what Garmin calls Dynamic Maps–are a first among the big GA apps, offering a glass cockpit-style basemap that automatically scales and declutters, with text always right side up. This update is further proof that Garmin is serious about the app world, and is starting to leverage some of its panel mount avionics expertise.

The third major app company, WingX,  had news of their own at Sun ‘n Fun. WingX Pro7 now supports additional ADS-B receivers, including the Dual XGPS 170, Sagetech Clarity, SkyRadar, iLevil and more. The company also demoed their new FlightShare function, which allows pilots to share flight plans between devices, even in the air. The app does this using wireless devices like a WiFi ADS-B receiver to share data.

While Sun ‘n Fun focuses on light sport and owner-pilots, the iPad is also changing the way professional pilots fly. But unlike Part 91 private pilots, professional pilots need formal FAA approval to use an iPad as an Electronic Flight Bag. To serve this growing market, Sporty’s Pilot Shop announced its Easy Approval product for Part 135 and 91K operators. This custom consulting solution walks flight departments or charter companies through the process of getting iPads approved, from testing and paperwork to training and checklists.

A standard application for approval is $799 and includes up to four aircraft and training for 20 pilots. Unlimited General Operations Manual updates are included as well as one custom update if necessary for approval. Additional customization is available upon request. Orders are expected to be accepted soon.

There were plenty of other iPad stories at Sun ‘n Fun, including:

Poll: track up or North up?

ForeFlight tips for the iPhone
Scroll to top