Blog - Latest News
You are here: Home1 / Advanced Tips2 / DUATS is dead. Here’s why you won’t miss it. 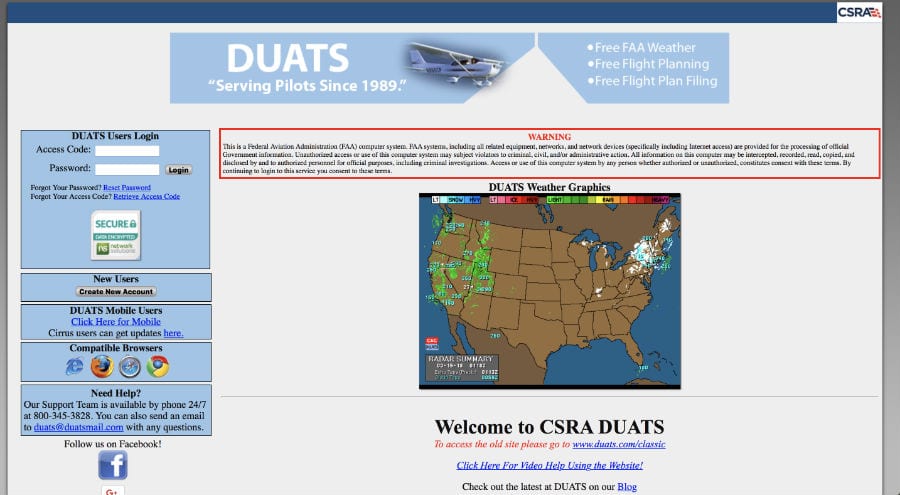 DUATS, the US government’s program for retrieving weather briefings and filing flight plans without talking to Flight Service, was a breakthrough when it was introduced in 1989. It grew up with the internet, and seemed to point the way to a new, more efficient preflight planning process. Newer pilots may not believe it, but in the mid-1990s DUATS was viewed with the same awe and respect as electronic flight bag apps are today. 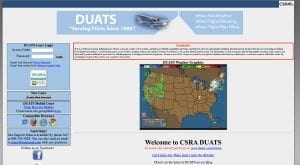 The DUATS website will be shut down in May.

But times change and now, almost 30 years later, DUATS is being shut down on May 16. The official reason is that the contract between the FAA and CSRA (a government contractor that was formerly called CSC) is expiring. Flight Service (run by Leidos, another government contractor) has added almost all of the capabilities that DUATS once offered – in fact, Leidos was awarded a contract alongside CSRA in 2015 for “DUATS II.” Over the past few years, Flight Service has made some major changes, becoming more of a data platform that connects pilots with the FAA, and less of a call center. Given those changes, keeping a separate DUATS service active became increasingly unnecessary.

The more practical reason is that electronic flight bag apps have completely revolutionized how most general aviation pilots plan flights and file flight plans. If the original DUATS was a basic web browser on dial-up, and the second generation DUATS was a full-featured website, the modern successor is ForeFlight, Garmin Pilot, or Fltplan.com. These apps have been moving away from DUATS for years, building their own interfaces and features. While the FAA has advised pilots to use 1800wxbrief.com as a replacement for DUATS, we suspect most will be using their favorite app.

We spoke to Tyson Weihs and Sam Taylor at ForeFlight to understand how aviation’s most popular app handles flight plans and preflight briefings. What changes with the end of DUATS? Will pilots have to change any settings? The short answer is that ForeFlight users are just fine – in fact, the app offers more redundancy and features than DUATS ever did. While a future app update will remove the DUATS login altogether, pilots filing a flight plan today will already be routed through ForeFlight’s infrastructure. There’s nothing to do.

How does ForeFlight do this? The app is directly connected to AFTN, which is sort of like the aviation world’s own private internet, routing data between the FAA, air traffic control, and other service providers. ForeFlight accesses this directly via the FAA, but also the company’s own connection in Denmark (which came along when it acquired AviationCloud in 2015). That means there are globally redundant connections on two continents, something even Leidos doesn’t have. ForeFlight also has its own ATC messaging infrastructure to communicate AFTN messages to the system. That means the app can fail over and back between the FAA and Denmark, so uptime is excellent: when Leidos goes down, ForeFlight can route around them. 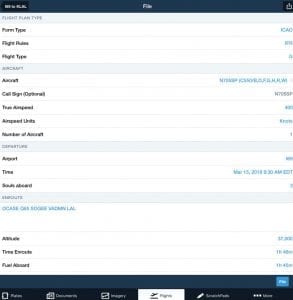 ForeFlight can accommodate a number of different flight plan types from its Flights page.

There is also a growing list of countries outside the US that accept flight plans from ForeFlight, including Canada, Mexico, Bahamas, Australia, and most countries served by EUROCONTROL. Just as important, the app will even support flight plans for trips that start and end in Canada or the Caribbean, not just US-outbound flights.

Weihs says, “we provide a higher level of insight into the actual filing messages; for instance, if AFTN sends a “REJ” (rejection) for a filed flight plan, we let users know about that and the reason for the rejection. We also with our own infrastructure can monitor “ACK” messages to know when ATC got it, and also monitor for things like EDCT times (ground delays).”

When you need to make a quick change to a flight plan, like updating the departure time, ForeFlight sends “DLA” messages to AFTN that delay the flight plan instead of canceling it, which means you don’t get sent to the back of the line. The app also sends “as filed” notifications now via push notifications to the app and with an email so there’s no question on the status of the flight plan.

ForeFlight says they file the vast majority of electronic piston flight plans and a rapidly growing percentage of turbine and turboprop. They even have a dedicated team called “FileOps” that monitors errors and rejections encountered by pilots when filing a flight plan, and are ready to pro-actively assist when needed.

The DUATS news is neither surprising nor bad for pilots. The government is shutting down outdated technology that is increasingly expensive to maintain – a tough sell given the inexpensive and more robust commercial services that are now available. Flight Service isn’t going away, at least not anytime soon, if for no other reason than backup. A bush pilot in Alaska will need a phone number to call for many years (although this could conceivably be ATC some day, without the middle man). For pilots who don’t want to pay for an app subscription, 1800wxbrief.com is a good option, as is Fltplan.com’s free app. But there’s no denying that apps have become the primary way for general aviation pilots to interact with the air traffic control system.

Charging your iPad: what you need to know

Quiz: What are you going to do when your iPad quits working in flight?
Scroll to top