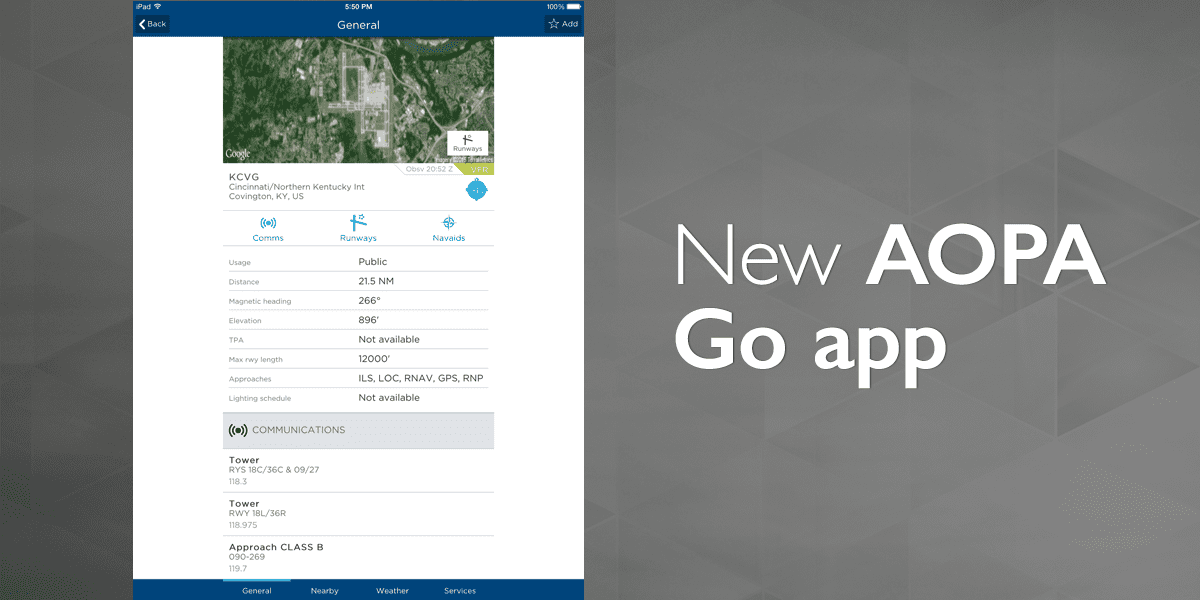 The Aircraft Owners and Pilots Association (AOPA) has a somewhat rocky history with aviation apps. Originally they offered an iPhone-only app, developed by ForeFlight, that was based on their popular AOPA Airports reference book. In 2012, they decided to take on the Electronic Flight Bag (EFB) app market by launching AOPA FlyQ, a rebranded version of Seattle Avionics’ full-featured app. This upset a number of people who felt that AOPA was competing with the nascent aviation app industry, as well as some members who felt FlyQ should be free with membership. AOPA FlyQ quietly faded away last year.

Now the organization is back, with a new app called AOPA GO. The organization is trying to avoid the previous controversy – AOPA GO is indeed free for members, and it’s more of a pre-flight planning app than a full-featured EFB app. The app has a very clean design that’s easy to read on the go, and it’s actually refreshing that it’s not trying to do too much. In fact, there are three main functions: Airports, Weather and Flight Planning

The Airports page takes advantage of a unique AOPA strength, their robust airport directory. In addition to standard information like runway length, frequencies and navaids, the app also includes detailed facility information. This includes FBOs, flight schools, rental car services an restaurants. This includes plenty of phone numbers so calling for more information is just a tap away on your iPhone or Android phone. The other unique feature in the Airports page is its remarks section. This includes airport notes, but also AOPA member comments, which can really help find the right airport or FBO.

The Weather section allows you to search for airport weather or view nearby airports. This includes METARs and TAFs (in raw or plain English format), plus some basic weather imagery like radar, prog charts, AIRMETs and satellite. The basics are covered here, but we hope to see more information added here, like icing and turbulence forecasts. We also had some issues getting images to load (see below).

The third section pulls in AOPA’s Online Flight Planner (which is powered by Jeppesen). This allows you to create and store flights, including complex routing and aircraft N-number. Once a route is created, you can view route weather, get a formal DUAT weather briefing, view a Nav Log of all your waypoints and file a flight plan. These are the essentials, although there are no options for suggested IFR routes, and the DUAT implementation misses some of the more sophisticated features that Lockheed Martin Flight Service offers.

AOPA GO is not a competitor for ForeFlight, Garmin Pilot or WingX – its focus is on pre-flight functions. As a result, there are no in-flight charts, no moving maps, no terrain maps and no ADS-B weather integration. That may seem fairly basic, but that’s the idea. It’s also free for AOPA members, which makes it a great value. In particular, users of AOPA’s online flight planner tool will find AOPA GO to be a valuable addition.

Our biggest complaint is that the iPad version isn’t optimized – it’s basically the iPhone version scaled up. We wish the weather section was more robust, too. There were a few bugs in our testing (like some radar images that wouldn’t load), but this is the first version of the app so it’s certainly an app to watch.

AOPA GO is a free download in the App Store. It’s also available for Android devices in the Google Play Store.

How to configure iPad wireless settings during preflight
Scroll to top