Blog - Latest News
You are here: Home1 / Apps2 / AerovieReports: All about the PIREPs 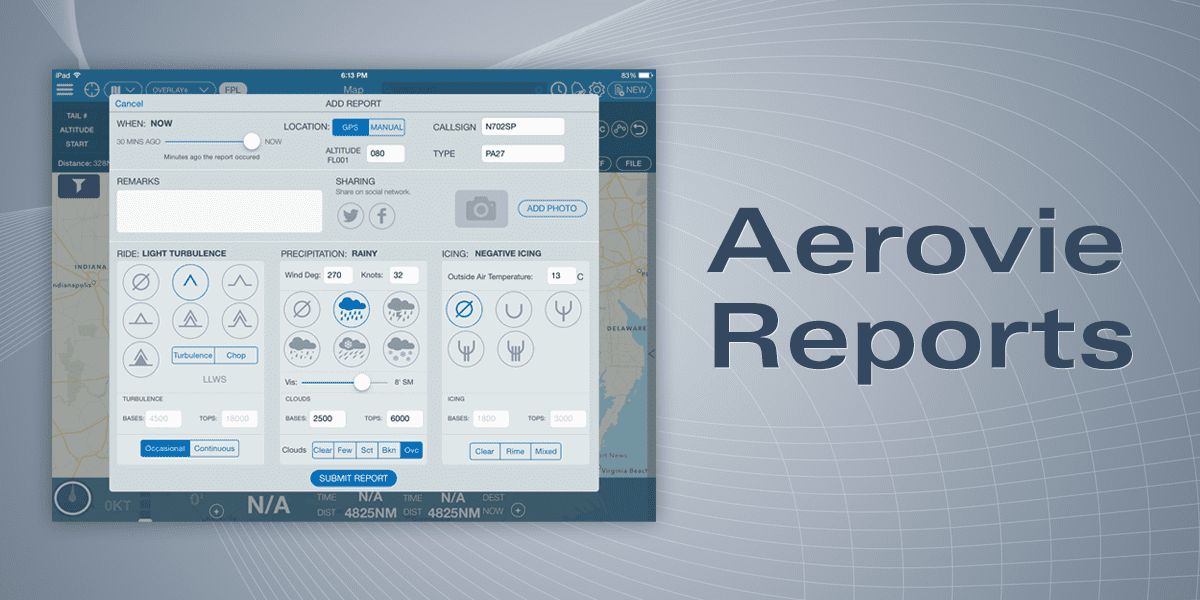 The AerovieReports app has lived under the radar for a little over a year now in the App Store. The app was released in February of last year with the main functionality centered on allowing you to submit a pilot report (PIREP) directly from your iPad or iPhone to Lockheed Martin Flight Service. Since most GA pilots aren’t flying with onboard internet (yet), the intent is for you to note the conditions when in the air and then send the report when back on the ground. This is often the only way for IFR pilots to submit a pilot report when flying in congested airspace where ATC doesn’t have time to take the info and it’s not possible for you to leave the frequency to call FSS.

AerovieReports expanded its capabilities a few weeks back with an update that added a collection of new EFB functions, including VFR and IFR charts, NOTAMs, expanded weather features and more. Here we’ll take a look at this latest update along with the PIREP reporting feature. 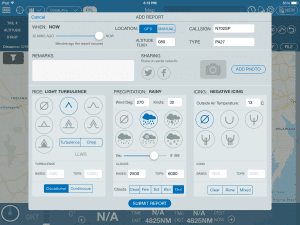 The PIREP submission form is well-designed and easy to fill out.

The latest in PIREP submission

Lockheed Martin has made great strides in improving all aspects of Flight Service functionality in the past years. While they continue to provide an excellent website for next-generation briefings and flight plan filing (and we suppose you could still call them if you wanted to), you won’t find a dedicated Flight Service app in the app store. They understand that there is already a collection of powerful aviation apps on the market and don’t need to reinvent the wheel. Instead, their focus is on offering their services directly to the aviation app developers to allow them to integrate the tools right into the apps pilots are already using.

A great example of this is ForeFlight’s flight plan filing system with Lockheed Martin FSS, which provides a 2-way communication channel between the app and FSS and performs tasks like confirming flight plan filing, notifying you of expected IFR clearances and allowing you to open/close VFR flight plans right in the app.

AerovieReports is using this same technology to allow pilots to submit pilot reports directly to flight service. When in the app you’ll see a “New” button in the upper right corner of the screen–tap this to load the PIREP submission form. They’ve done a nice job here with the interface, making the data-entry process very straightforward. To prevent submitting a PIREP with old data you must have experienced the conditions within the previous 30 minutes. You can have the app determine your current position with GPS when in the air, or manually enter the location using the form’s integrated map. Next tap the respective graphical icon for the appropriate level of turbulence, precipitation and icing, and specify the altitudes of the conditions when known. After your data is entered it just takes one tap of the submit button to send your report to FSS.

Aerovie also excels at providing a nice interface for displaying PIREPs on the map. When PIREPs are selected as an overlay on the map you’ll see a button that looks like a funnel in the top left corner. Tap this to reveal two controls that allow you to filter the displayed PIREPs based on reported altitude and age. This is very useful, for example, to only show reports under 10,000′ within the last 30 minutes. You can also set up push notifications in the app that will alert you when PIREPs are submitted within a specified radius of your current location. 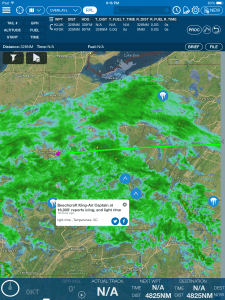 You can filter the PIREP display by altitude and recency for a more accurate picture of reported conditions.

AerovieReports as an EFB app

The latest update to AerovieReports expands its feature set to include the standard EFB functions: moving maps with VFR sectionals and IFR en route charts, approach plates, detailed airport directory, comprehensive weather, flight planning and FSS filing. While the EFB feature set is fairly complete, we’re not quite ready to recommend this as a replacement to your primary aviation app. The charts are often slow to load and weather radar overlays take over 5 seconds to fill in when on the ground. The menus and buttons are also relatively small on the iPad, making it tough to move around the app.

With that being said, there are some excellent weather overlay features in here that we haven’t seen in many other apps that are worth pointing out:

While AerovieReports could use a few interface tweaks and performance improvements to make it really excel, it’s still an app every pilot should keep on their iPad if only for the advanced PIREP features. The latest update is fairly ambitious, attempting to add a feature-set that the big app developers have spent years improving and refining. Keep an eye on this app though in the months and years ahead, as they seem to stay on the cutting edge with weather and FSS integration.

AerovieReports includes a free 30-day trial, and then requires an annual subscription of $68.99. After the 30-day trial period you can continue to use the PIREP submission feature free of charge, but the rest of the app features will be locked.